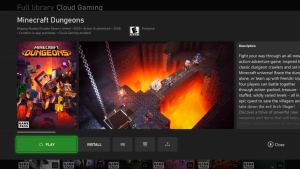 Microsoft is introducing a way to possibly spare some space on your Xbox systems. The company announced today during its Gamescom 2021 Xbox Stream that it is adding cloud gaming as an option to its home consoles. This means you can now stream games instead of downloading them on the Xbox Series X/S and Xbox One starting this holiday. To use this feature, players will need a subscription to Xbox Game Pass Ultimate.

Cloud streaming games to console might seem like a silly idea. After all, Microsoft’s cloud simply uses real Xbox hardware stuffed onto server racks to broadcast gameplay over the internet. So then why do you need the cloud if you have the same hardware at home? Well, the idea is that the cloud can help with certain edge cases and scenarios. For example, you can try a game before committing storage space or your limited data cap to downloading the entire thing. Of if your friends message you to join them in a game, you can hop in immediately even if you don’t have that game ready on your drive.

These are things that Xbox owners have asked for, and now Microsoft is delivering this extra convenience.

“We’ve been listening to our gamers and have heard their feedback loud and clear: they want to try new games fast without waiting for an install to finish,” Xbox cloud gaming boss Catherine Gluckstein said. “Xbox Cloud Gaming (Beta) on Xbox consoles lets you play new games faster than ever, optimizing space and saving you time.”

Of course, you can also still use cloud gaming when you don’t have access to your Xbox. Game Pass Ultimate subscribers can stream games on smartphones and Windows. And the service may come to smart TVs next.