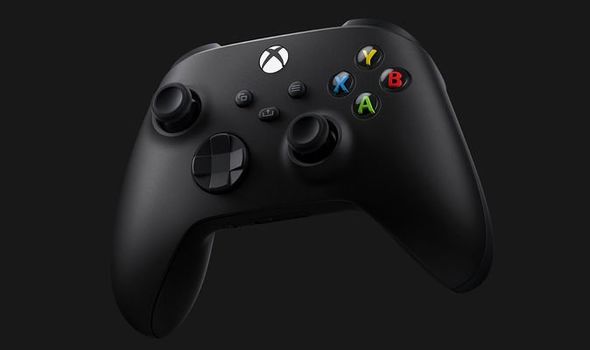 Xbox Series X pre-order stock is available once again at major UK retailer Currys, however there is a big catch you need to be aware of before heading to their website. We’re less than a month away from the highly anticipated worldwide release date of the Xbox Series X and Xbox Series S. And in the run-up to the launch of Microsoft’s upcoming next-generation consoles Xbox Series X pre-orders have been selling like hot cakes.

After an initial batch of Xbox Series X pre-order stock sold out in September pre-orders have been few and far between.

UK retailer Currys, however, has today re-listed the Xbox Series X as up for pre-order once again.

But when you head to the listing it wouldn’t be a surprise if you end up looking twice and rubbing your eyes as the Xbox Series X is listed for £2449.

This, however – isn’t a typo. The current batch of Xbox Series X pre-orders at Currys are only available to “priority” customers that received a “valid code”.

And this vital code offers Currys customers a £2,000 voucher which goes towards the listed price of the Xbox Series X.

The product listing features the warning: “This product is only available to priority pre-order customers with a valid code.

“Please don’t try to buy this product without a code. Enter your code to discount the price.”

While the page also says: “This product is only available to priority pre-order customers with a valid code.

“If you don’t have a code, please don’t attempt to buy this product. On entering your unique code, price will be discounted. The voucher code can only be redeemed on desktop and mobile website excluding Currys PC World app.

“Orders placed without a unique code will be cancelled, refunds will be credited to your payment method within 3-5 working days”.

An e-mail that one Xbox fan received from Currys explained why they were taking this approach to pre-orders.

The e-mail said: “As per the terms of your reservation, we’re contacting you to let you know it’s 28 days to go before release of the Xbox Series X and the window to pay your outstanding balance and guarantee your console at launch is now open.

“The pre-order window closes Sunday the 18th of October at 11.59pm BST. After that, we won’t be able to accept further pre-orders. So, here’s some important information and the next steps you’ll need to take to make sure you get your Xbox Series X.

“Because demand is so high and to make sure your pre-order is prioritised when orders open online, we’re increasing the upfront cost of the Xbox Series X by £2000. But don’t worry. This won’t change how much you pay! We’ve applied the same £2000 increases to your £5 deposit, giving you a unique code to the value to £2005 to use against your Xbox Series X pre-order only.

“This is to make sure that you pay the correct RRP for the console. And just to let you know, for Xbox Series X priority pre-orders, our usual price promise doesn’t apply.” 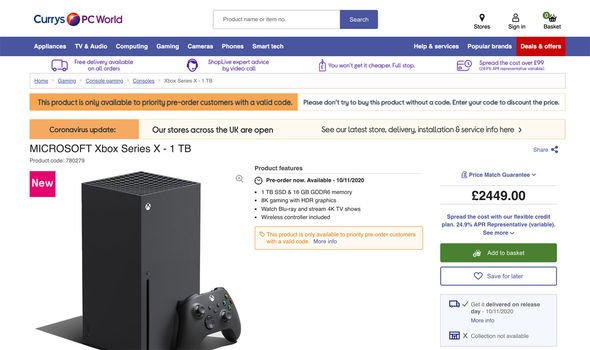 Speaking about this pre-order policy, Nick Hayden, Head of Gaming at Currys PC World, said: “The demand for pre-orders of the Xbox Series X and S has been exceptionally high and this unique pricing strategy helps prioritise those who have already pre-ordered.

“They will be able to pay the rest of the cost today and ensure they get their Xbox when the launch day arrives next month.

“All customers who have already pre-ordered with Currys PC World will have received a unique code, which brings the surprise price tag back to RRP ahead of them making their final purchase.

“The codes will be valid up until 11:59pm GMT on Sunday 18th October 2020, when the online price will drop back down to the RRP so others can be in with a chance to get their hands on these new consoles.”

In other news, the Xbox Series X will also be available to pre-order for gamers in the US today.

The retailer said they will have an “extremely limited” number of Xbox Series X pre-orders available.

The store’s official Twitter account posted: “We are excited to announce another batch of pre-orders for #XboxSeriesX and #XboxSeriesS consoles on Tuesday, October 13th!

“Quantities will be extremely limited, so don’t forget to secure your order!”

On their website they have one Xbox Series X bundle listed which costs $699.97.

This include the Xbox Series X console, with an Xbox Elite Wireless Series 2 controller as well as three months worth of Xbox Game Pass Ultimate membership.