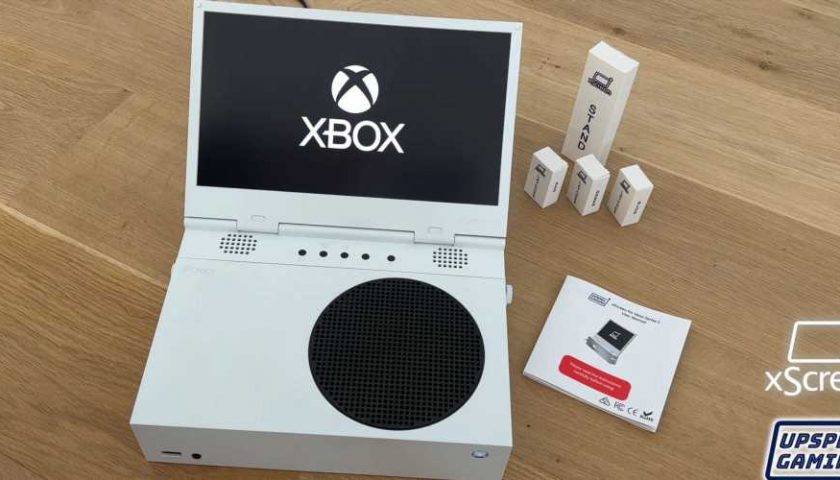 How would you like to turn your Xbox Series S into an extremely affordable gaming laptop that can play modern games on a crisp 1080 screen? If the answer is “yes,” then I present to you the Upspec Gaming xScreen. It’s an LCD panel that you attach to your Xbox Series S so you can game on the go–provided you have an electrical outlet nearby, of course. Which is honestly the same for most gaming laptops as they typically can’t exert their full power without being plugged in.

Anyway, the xScreen is an 11.6-inch, 60Hz, 1080p screen that pumps out a whopping 350 nits, making it pretty good for playing outside in direct sunlight. Not that you would, unless there’s an outlet on the outside of a building, but testing by The Verge reveals decent viewing angles even in a bright space.

The xScreen connects via a USB-A and HDMI port on the back of the Xbox Series X. Once attached, secure the xScreen to your little console using a pair of latches on either side. The screen folds down neatly for storage or transportation, and although the fit isn’t exact, it’s close enough that you can’t really tell the difference unless you really stare at it.

There are, however, a few flaws to the xScreen. Chief among them is that the xScreen covers the Xbox’s Ethernet and USB ports on the back, meaning you can only connect to the internet via Wi-Fi (not great for multiplayer gaming). The speaker quality, according to The Verge, is pretty poor, and the screen also closed atop the Xbox Series X’s main vent, meaning if you don’t put your console into energy-saving mode when you close it down, the vent will keep spewing heat on the screen, potentially damaging it.

It also needs a dedicated carrying case to avoid damage, which is an extra $60, and the whole xScreen itself already costs $249.99, which is almost as much as another Xbox Series S. On the other hand, a gaming laptop can cost upwards of thousands of dollars. The xScreen is undoubtedly the cheapest option for gaming on the go outside a Steam Deck or a Nintendo Switch.