Xbox One owners with an active Xbox Live Gold subscription have just over 36 hours remaining to make the most of the existing games with gold titles.

The majority of the September 2019 Games with Gold line-up will be removed from the Xbox digital storefront and that means two Xbox games will no longer be free to download.

Major Nelson says that September's lineup provides over $114 dollars in value and up to 4360 in gamerscore, but that's just numbers.

The fact is you can download Hitman The Complete First Season and Tekken Tag Tournament 2 without paying a single penny. And that's a good deal no matter how you slice it.

Read on and you can gather a bit more intel about these free games, as well as grab a look at them on the below trailer.

Hitman The Complete First Season: Features all of the locations and wealth of content created for the award-winning creative stealth action game.

Included are all six story Episodes plus all Bonus Missions, along with Challenges, Opportunities, Escalation Contracts and Featured Contracts.

With over 100 hours of gameplay, look forward to future live updates including new Elusive Targets.

As Agent 47, you will perform contract hits on powerful, high-profile targets in exotic locations all around the world.

Both of these Xbox titles are departing the Games with Gold selection of free games on September 30.

Choose from a massive cast of characters and unleash your most vicious combos to claim ultimate victory!

Though we never like seeing free games removed, the upshot is that the October Games with Gold titles will be available to download straight after.

Microsoft announced the new free October Games with Gold titles earlier this week and if you missed the news, here's a quick overview of what games they have in store for you.

"In October on Xbox One, stomp your enemies and save the city in Tembo the Badass Elephant and then get in the spirit of Halloween by playing Friday the 13th: The Game," explained a Microsoft blog post.

"On Xbox 360, and Xbox One via Backward Compatibility , play the game based on the animated movie with Disney Bolt , then sharpen your blade and take on your enemies in Ninja Gaiden 3: Razor’s Edge ."

Curious to know more? Then certainly have a watch of the below trailer and read on for a more detailed description of each game. 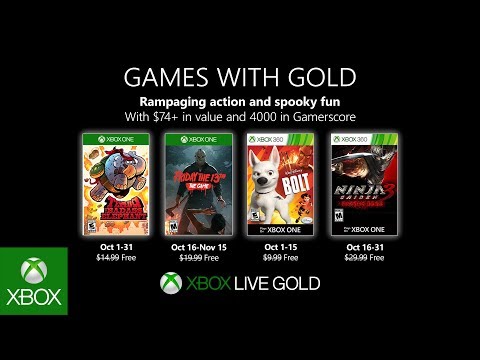 Shell City is under siege and only one thing can save it: the peanut-chompin’, villain stompin’, Tembo the Badass Elephant. Under attack from the devastating forces of Phantom and their terrifying war machines, help the National Army defend the city by smashing, punching and butt-stomping the enemy. This action-adventure title weighs in at seven and a half tons of fun.

Friday the 13th: The Game – Available October 16 to November 15 on Xbox One

Celebrate the spooky month of October with the horror title, Friday the 13th: The Game. Stalk, ambush and strike fear in the hearts of many as you take control of the legendary Jason Voorhees. Or try to survive the night as the Camp Crystal Lake counselors by either hiding as best you can or bringing the fight directly to Jason. Be wary, the woods are his and you never know when or where Jason will strike!

Travel the globe and join Penny and her super dog, Bolt, as they try to save her dad from the evil Dr. Calico in Disney Bolt. Based on the high-action television series set within the feature film, utilize Bolt’s superpowers or Penny’s hacking skills to outwit your enemies and save the day. Don’t miss out on this family-friendly, action-adventure title for all ages.

Take part in intense and brutal action in Ninja Gaiden 3: Razor’s Edge. The legendary ninja, Ryu Hayabusa returns, but with a deadly curse threatening to destroy him. Take control of him or his fellow ninja: Ayane, Kasumi or Momiji, as the battles are sharpened, and the difficulty raised to deliver the ultimate action game experience.