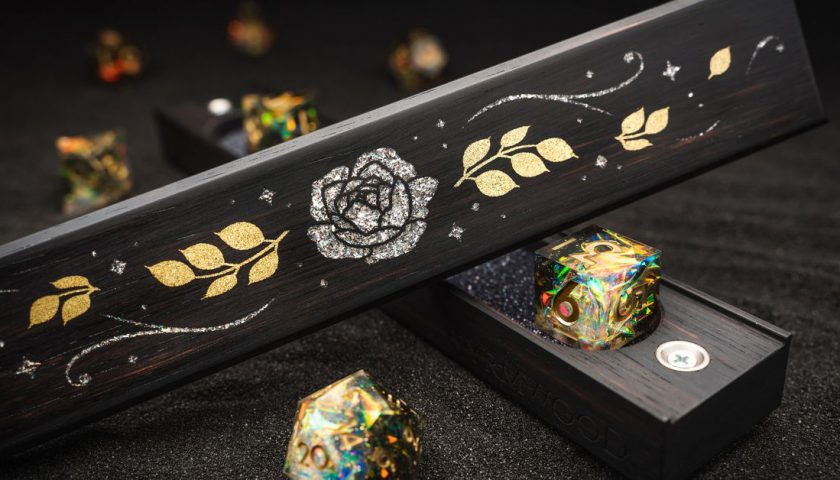 Two of tabletop gaming’s biggest success stories are teaming up for an exclusive new line of products. Wyrmwood Gaming, makers of specialty tables and other accessories, is coming together with Dispel Dice, whose unique, sharp-edged dice turned heads in 2019. The Dice By Wyrmwood and Dispel Kickstarter campaign will offer three unique dice vaults and 18 dice styles — including, according to a recent YouTube video, dice with real flowers embedded inside.

But the campaign also underscores just how challenging the world of boutique gaming accessories can be.

The Wyrmwood story starts in 2013, when the Massachusetts-based company raised more than $84,000 to produce a series of hand-made wooden dice vaults — slim, dovetailed trays with magnets to secure the lid in place. The company went on to run 11 more Kickstarter campaigns through 2019, averaging more than $250,000 each. It also ran a respectable online storefront and enjoyed a healthy convention circuit, including highlights at PAX and Gen Con.

But when the pandemic took hold last year, Wyrmwood was forced to lay off nearly its entire staff. To compensate, the company hit Kickstarter harder than ever before. It raised more than $1.5 million for custom dice in May 2020 and then more than $8.8 million for a new line of gaming tables. Those bold moves have brought unprecedented growth to Wyrmwood, including its acquisition of another Pennsylvania-based woodworking firm.

It’s also led to friction within the organization. After employees banded together to elevate their concerns about working conditions, CEO Doug Costello resigned. There have also been additional layoffs at the Pennsylvania firm related to the acquisition.

Strangely enough, all of this has played out on YouTube where the company’s Wyrm Lyfe series has boldly broadcasted its ups and downs in 10-minute updates two or three times each week. That’s where you can watch their record-breaking Kickstarter go live, and later view Costello’s resignation speech in its entirety.

Wyrm Lyfe is also where many fans first met Karen Wang, CEO and founder of Dispel Dice, who worked from Wyrmwood’s offices for several weeks leading up to the new campaign. After a successful Kickstarter in 2019 that earned more than $2.3 million, Dispel ran into some production issues and is currently running behind on fulfillment. As Wyrm Lyfe has shown, both companies need to keep the hype rolling in order to bring in the work that keeps their employees busy. At the same time, they also need to keep their existing customer base happy, building up those good feelings and positive word-of-mouth ahead of big crowdfunding launches.

For those reasons, their ambitious new crowdfunding campaign was pushed back from its original start date.

“We originally planned to launch this collaboration last month,” Wang told Polygon via email. “Navigating around COVID, the difficulties of producing consistently high-quality sharp-edged dice at scale, and some other unanticipated challenges pushed back our fulfillment timeline for most backers from Nov. 2020 to mid-2021, so moving the WWxDD collab back to address that first was my top priority.”

“We decided to delay for a few reasons,” Ed Maranville, vice president of crowdfunding at Wyrmwood, told Polygon. “Internally, we set very aggressive goals for ourselves, which is part of why we’ve grown so much over the years. However, we aren’t afraid to push pause when we need to. […] If you didn’t know us or our track record, it could definitely give somebody pause, and that’s the situation in which Dispel Dice found themselves as we approached the original launch date. We should note that we haven’t been immune from issues — I don’t think any manufacturer got through 2020 without some difficulties, and we’ve been dealing with supplier delays of our own, so more time to fulfill more orders was a good thing for both of us.”