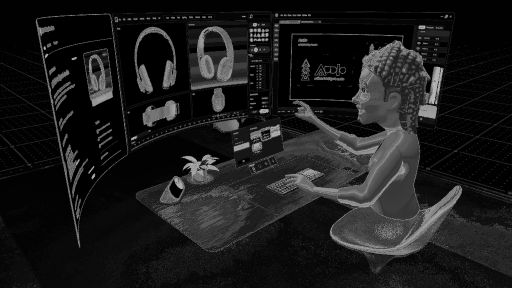 Meta Horizon Workrooms is the product name for the beta software on Quest 2 and Quest Pro that’s a cornerstone of the company’s approach to changing the way people work outside physical offices. It features support for traditional flat-screen video chat participants, too, but Workrooms users joining from a VR headset can also hear impressive spatial sound or draw ideas on their desk or shared whiteboard. The latest update adds multi-color sticky notes participants can sketch on and add to the whiteboard as well as breakout groups for smaller team discussions outside a larger meeting.

Multi-Display Mac Or PC In VR

The solo Personal Office space gives you up to three displays in VR. If you use Windows all three need to be physical monitors connected to the PC, while on Mac the extra two can be virtual. The app notes virtual screens will be also available on Windows “soon”. The online multi-user Rooms still only support one screen.

Meta also says that next year the app will support viewing 3D models inside Workrooms and, in the coming months, Meta is integrating with key Microsoft services including Microsoft Windows 365 and Microsoft Teams. Meta also announced integration with Zoom back in 2021 but now says “early in 2023, you’ll be able to join Workrooms via Zoom.”

Workrooms is “currently” free for Quest 2 and Quest Pro owners and it’s available in 22 countries. We’ll be curious to see how Meta continues to update the software as it takes center stage on Quest Pro. While third-party apps like Immersed and Virtual Desktop see large overlaps with Workrooms, system level access to features like full-color passthrough on Quest Pro may allow Meta to test new features early and often. The app, for example, lets you bring your desk and keyboard into VR, with Meta making those features available to developers as well after proving out their implementations in Workrooms. The app will also support Meta’s face-tracked avatar tech on Quest Pro and the company teased a “Magic Room” concept as part of its Connect event this year meant to move forward the idea of letting people collaborate more effectively no matter if they’re in the same physical room or remote.

“We’re already experimenting with Magic Rooms at Meta,” the company wrote in a blog post. “And we hope to make the experience widely available next year.”