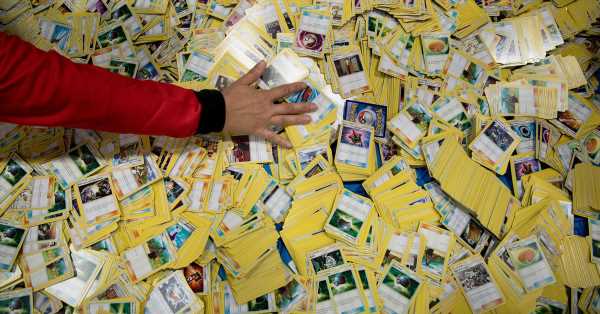 The price of Pokémon cards is through the roof. Speculators are sinking hundreds of thousands of dollars into individual cards. Some are gobbling up vintage unopened boxes for extraordinary sums, flipping them onto an open market starved for the rarest ones. It’s reached the point where companies that grade the cards for auction simply can’t keep up.

Now, the craze is extending to new-in-box Pokémon cards around the country, and retailers are struggling with unhappy customers. The situation peaked in February during a McDonald’s promotion. Participating restaurants gave out packs of collectible cards inside Happy Meals to celebrate the trading card game’s 25th anniversary. These bundles just happened to include some rare, holographic variants of beloved characters. Greedy adults rolled in before many kids could buy their share and wiped out the entire stock to flip them on the secondary market.

Rapper Logic bought this Charizard for more than $183,000 at auction. With the buyer’s fee the transaction came close to a quarter million dollars.
Image: Iconic Auctions

The current situation at retailers like Target is even worse. According to a report from Vice, people are camping out overnight waiting for the next shipment of Pokémon cards to show up. They’re after tins of cards called Shining Fates, and in particular a Charizard that’s going for $600 to $800 online. The gatherings have grown so large that corporate has given managers the green light to call in law enforcement to break things up.

What we’re seeing happen with Pokémon cards in real time is the formation of a bubble; just like what happened with tech stocks in the 1990s, housing in the early 2000s, and with Beanie Babies way back when I was in high school. Of course, bubbles big and small burst all the time. The higher they go, however, the more people get hurt in the collapse.

Even cereal isn’t safe from the Pokémon card frenzy

It’s a situation that Magic: The Gathering publisher Wizards of the Coast knows all too well, and one that was expertly documented by NPR’s Planet Money, who traced the history of Magic from an economist’s perspective way back in 2015.

Back when Magic first came out, one of the novelties was in how it was sold — in blind packs full of random cards, just like baseball cards. Wizards wanted fans to buy a bunch of packs in order to find that one card they were looking for, but what the company didn’t expect was a secondary market to form for buying and selling those rare cards at wildly inflated prices. A bubble formed almost immediately after the game launched, and the start-up company needed all hands on deck (pun intended) to fight its way out of it.

The solution? Print as many cards as possible to bring down the price of the most rare types. Wizards then expanded its game with different sets of cards over time. That’s how the original collectible card game transitioned from a Tickle Me Elmo-style fad into a franchise nearly 30 years old, with multiple new sets of cards released every few months.

Long story short, The Pokémon Company has its work cut out for it. It says it’s working to address shortages.

“We’re aware that some Trainers are experiencing difficulties purchasing certain Pokémon Trading Card Game products due to very high demand and global shipping constraints impacting availability,” the company told Polygon in a statement. “We understand this can be disappointing for fans and appreciate their patience as we are actively working to print more of the impacted Pokémon TCG products as quickly as possible and at maximum capacity. Reprinted products are expected to be available at retailers as soon as possible. More information can be found at Pokémon Support.”

But this isn’t 1994, when Wizards was doing battle with its own bubble. It’s 2021, and things are a lot more challenging.

Art for the Black Lotus, one of Magic: The Gathering’s most sought after collectible cards.
Image: Christopher Rush/Wizards of the Coast

Not only does The Pokémon Company need to work incredibly hard to meet consumer demand, it needs to meet it during an ongoing global pandemic, and in the shadow of a shipping fiasco in the Suez Canal that will continue to impact global trade routes for months to come. The whole time rabid influencers and would-be analysts will be riding the wave of Pokémon popularity, using it to boost their various social media and streaming video channels — and they will gleefully pile on if the bubble does burst.

That’s why The Pokémon Company is being so careful with its words right now.

“We’d like to thank the community for their continued support of the Pokémon TCG,” concludes the statement given to Polygon, “and understanding as we work towards increasing supply where it is within our control to mitigate further inconveniences.”