Tabletop roleplaying game studio Bandit Camp recently announced that its Wicked Ones sourcebook has finally made it onto DriveThruRPG. The sourcebook is the product from the studio’s successfully-funded Wicked Ones Kickstarter campaign that ran in June 2019, and is now being delivered to its backers. Thankfully, it’s still available to everyone who missed being able to pledge their support to the Kickstarter project.

Wicked Ones is currently available on DriveThruRPG in PDF version for $19.99, premium color hardcover for $51.64, and you get the PDF-hardcover bundle on sale for $51.64, an attractive discount from the original $71.63. In the Discussion section on the sourcebook’s product page, a Bandit Camp publisher Ben Nielson states that The Toolkit and Undead Awakening products that were included in the Kickstarter will also be making their way to DriveThruRPG by spring of 2021.

In traditional tabletop RPG play, you take on the roles of heroes who venture out to murder monsters, gain XP and loot, and become more powerful in order to murder stronger, bigger monsters, gain more XP and loot, etc. In the Wicked Ones RPG, that table is toppled over, and the roles are reversed. You instead roleplay as monsters building their dungeon lair, occasionally going up to the surface to raid and pillage for supplies. If you’ve ever played the classic video game Dungeon Keeper (Bullfrog Productions/Electronic Arts), or Dungeons (Realmforge Studios/Kalypso Media Digital), then you’re familiar with Wicked Ones’ gameplay.

A Wicked Ones campaign involves player-monsters constructing various dungeon rooms, building and placing traps, crafting concoctions and contraptions, dealing with minions and other creatures, making deep underground discoveries, and more. Unlike most player-character groups, your monster party serves some nefarious ‘master plan’, with almost all your activities driven by and towards that. The sourcebook provides you with the options of choosing practically any monster race as your character, along with nine monster archetypes to guide your skills and abilities along by. 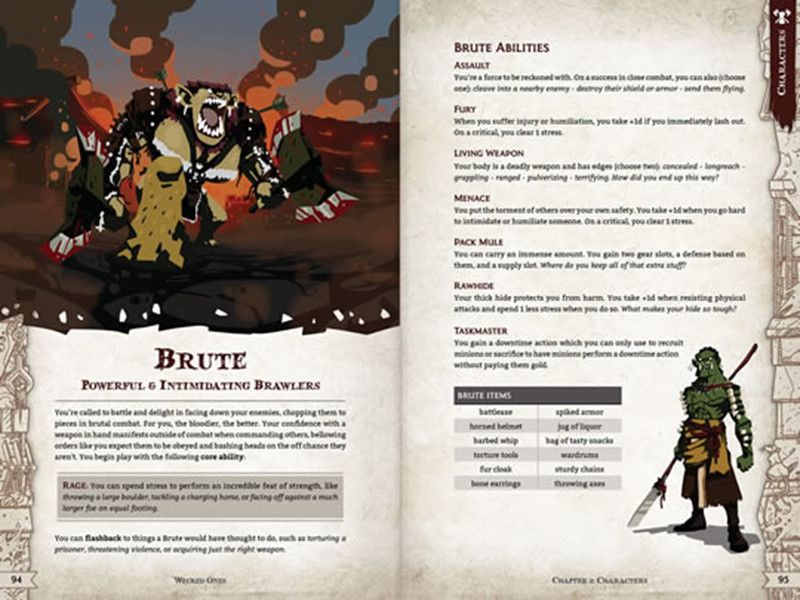 The Wicked Ones DriveThruRPG page lists all the prominent features of the game, along with displaying a few sample pages that show off the art, layout, and some monster info. Click over to the Bandit Camp website and you’ll find free samples of the GM, character, dungeon, and faction playsheets, as well as free VTT assets.