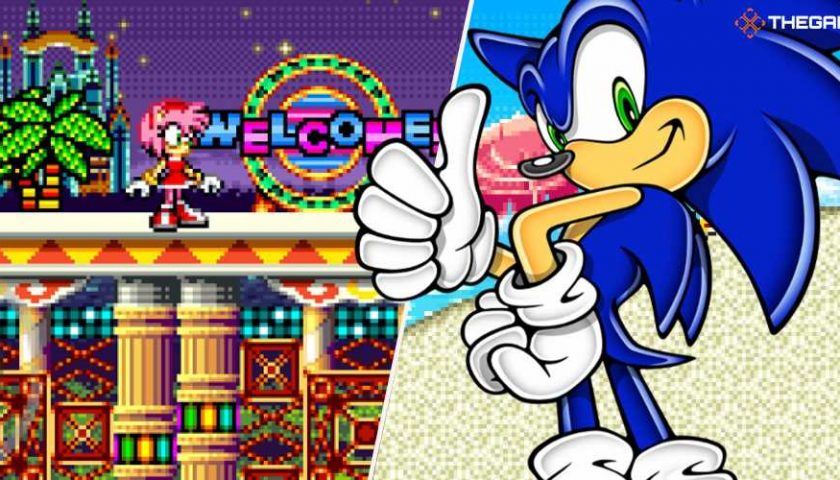 Curled up in front of the living room TV at maybe three or four years old, eating a strawberry cream biscuit, and making a complete pig’s ear of Sonic the Hedgehog’s Marble Zone is my earliest memory of playing games. When you’ve only just learned how to use a toilet, navigating those winding mazes and high-speed jumps can be a nightmare.

When you’re almost 30 and doing the same thing, it should be a bit easier, right? I’m pretty sure I’ve developed a bit more hand-eye coordination since then, and the experience of having beaten most other Sonic games released since should have prepared me for the task ahead. And yet here I am, giving up on a future in gaming because I can’t beat Sonic Advance.

Before Sonic Advance, the series hadn’t been monstrously difficult. There were some infamously tricky points, like the first game’s Labyrinth Zone and that bastard drum in Sonic 3’s Carnival Night Zone, but otherwise it was all about going fast and enjoying the ‘tude. 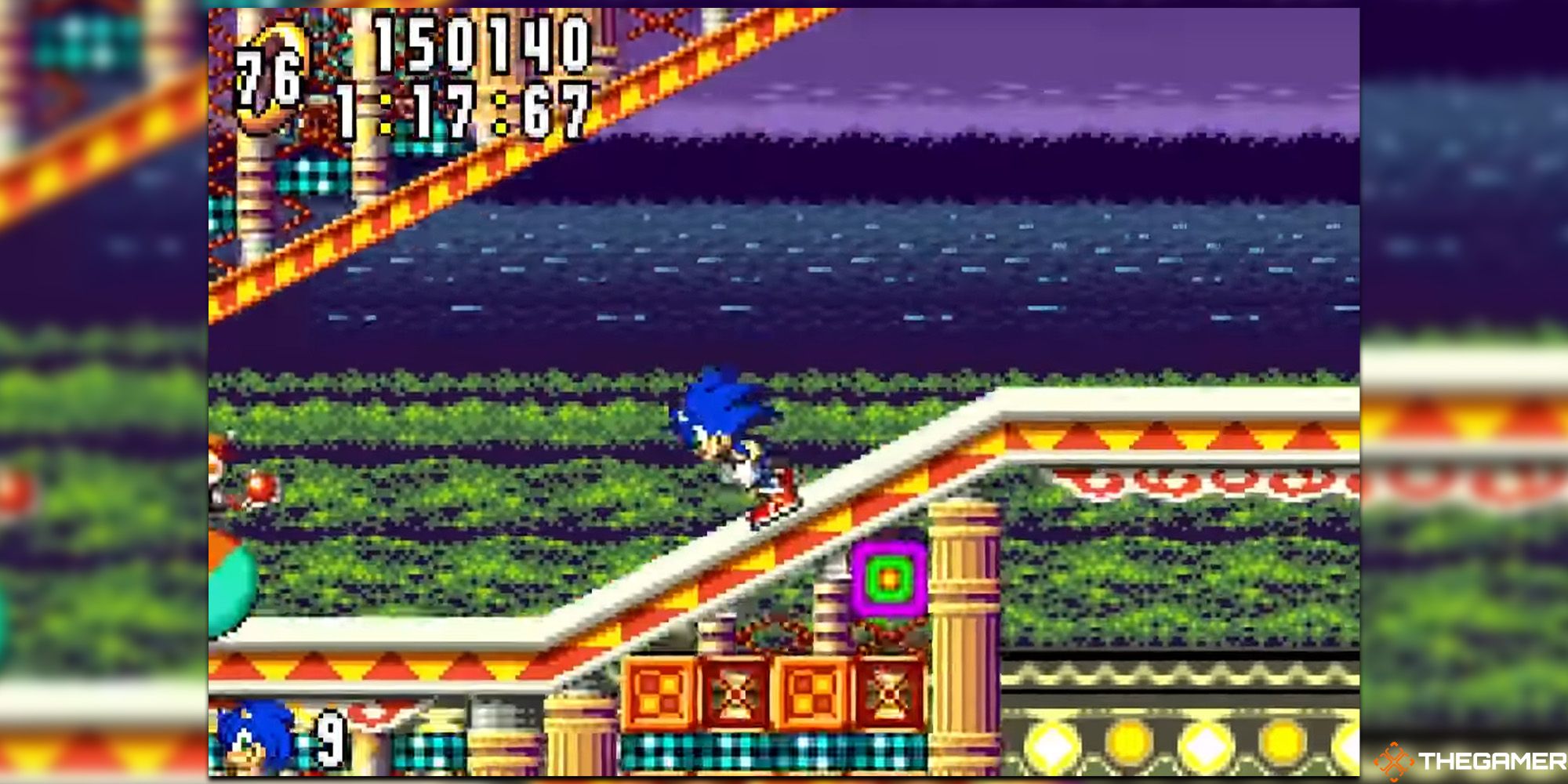 On the whole, Sonic Advance plays identically to the first few games. 2D platformers that embrace speed and momentum over precision platforming, you spin and dash your way through various acts before taking out bosses at the end. It’s Sonic, you know how it goes. And yet, for Sonic’s debut on Nintendo consoles in 2001, Sega and Dimps made many players’ first taste of the series the most sadistic, soul-crushingly evil instalment yet.

The Sonic community often latches onto one thing about Sonic Advance that makes it so tricky: its bottomless pits. They appear in almost every level, and are often positioned in such a way that you’re not aware you’re in one until it’s too late and you’re dead. In the latter half of the game, you’re expected to pull off precise jumps into the unknown, landing on off-screen platforms suspended above pits of certain death.

Dimps’ overreliance on these sudden-death moments has become infamous for Sonic fans, as it reused it a lot in the later Advance games, Sonic Rush, and even Sonic 4: Episode 2. However, it doesn’t tell the whole story of why Sonic Advance is so damn difficult. 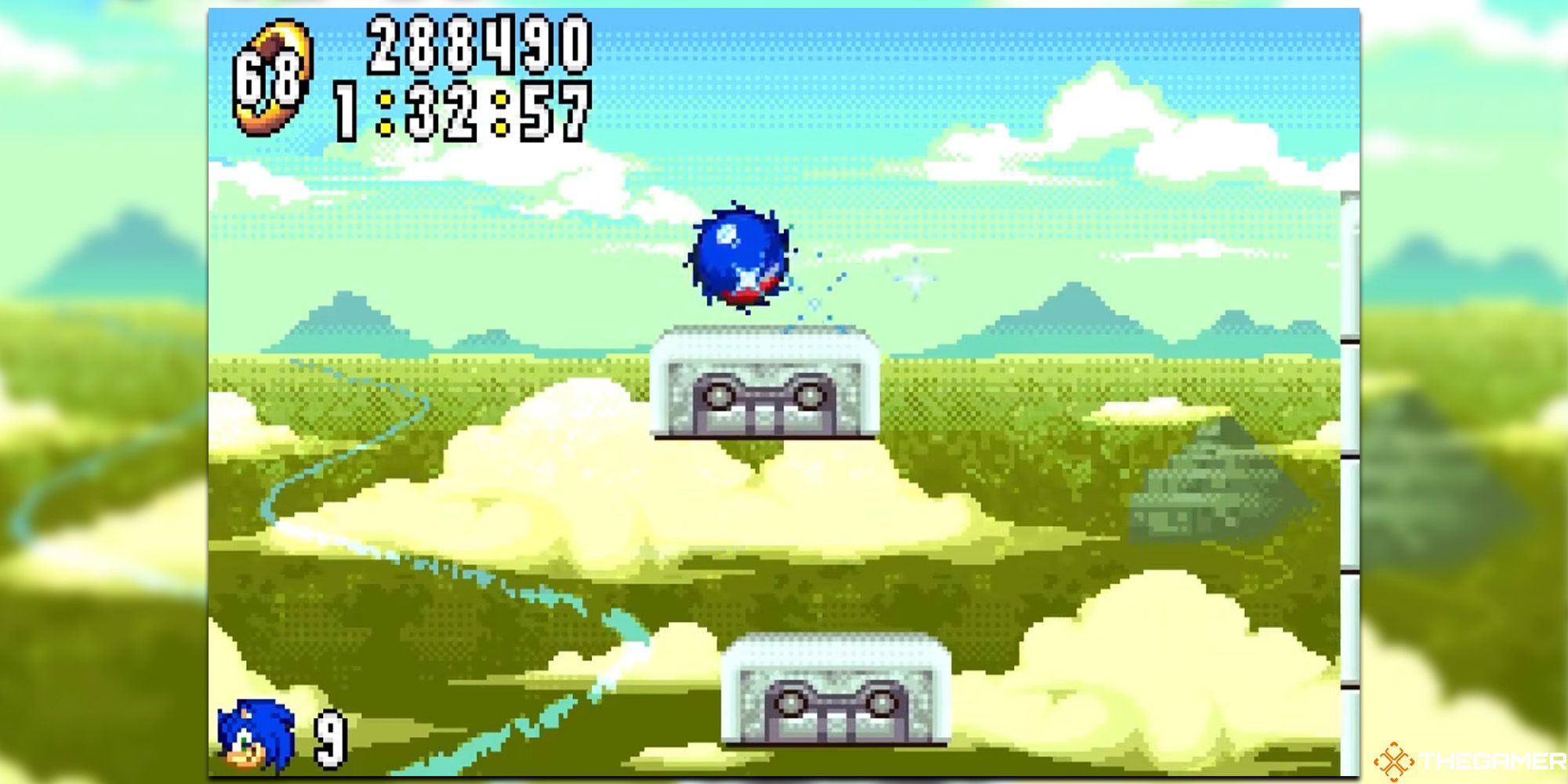 Earlier games were generally very forgiving. Enemies followed neat and predictable patterns, traps were set up in a way that meant you very rarely careened into them before you had time to process their existence, and the bosses often gave you just enough space to manoeuvre. They paint a picture of peril without actually being too dangerous, and most of the challenge was in just getting around the environment instead.

Sonic Advance, on the other hand, actively wants to kill you. Enemies will adjust their movement patterns on the fly to put themselves just in the way of where you’re going to go, whether that be in the middle of a jump or frustratingly nestled right onto the only space of safe ground you can see. The ones with projectiles are even worse, as they seem to time their attacks for once you’ve committed to a trajectory and just have to take the hit.

The levels themselves pull you away from the ‘brain off, go fast’ style of play the older games fostered. A great example is in the final major level of the game, Cosmic Angel. In it, there’s a segment where the springs fling you off-screen in a way that makes you think you can just let go of the pad and let physics take the wheel. Except, if you do that, the last spring doesn’t carry you far enough, and you’ll crash into a wall of spikes before falling right back to the start of the segment. Instead, you need to work with Sonic and press the direction you’re going in at all times – anything else is spiky failure. 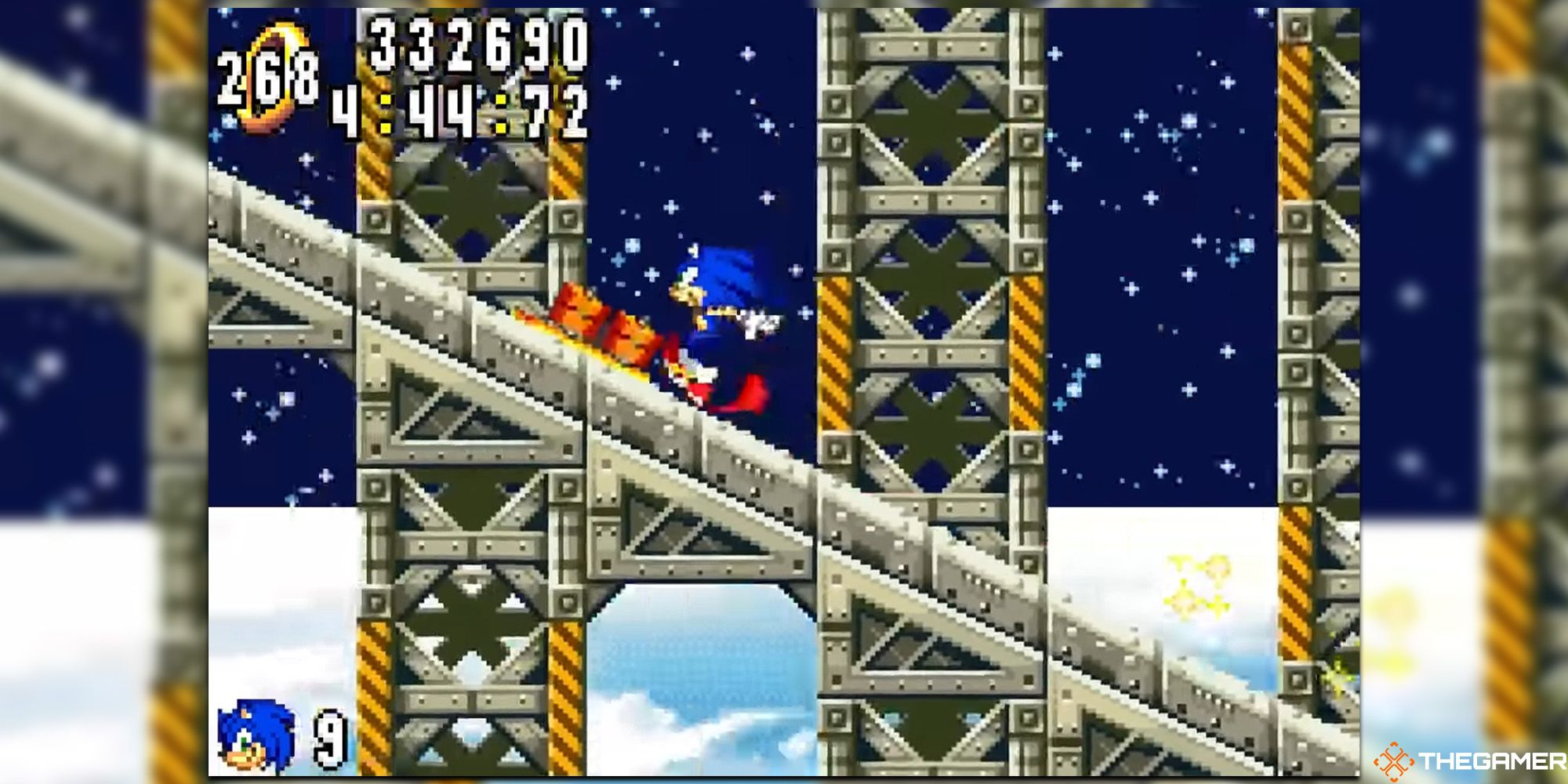 Even the bosses quickly move away from the basic pattern recognition of older games. It starts out simple enough, with Neo Green Hill Zone’s boss just being a car that drives back and forth, Sonic 2-style. The second zone, Secret Base, is just as basic, with Eggman now opting for a robotic pogo stick to get the job done. Then Casino Paradise comes along and throws the first elements of randomness at you, as you struggle to duck and dive between Eggman’s ship and a giant spiky ball darting out of various pipes. It’s still not too rough, but Eggman’s suddenly gone from being a mindless drone doing the same thing repeatedly to someone who reacts to Sonic and wants to give him a pasting.

It isn’t until Ice Mountain that he turns into a right knobhead. The final boss of this zone takes place entirely underwater, and Eggman will actively block you from getting out for a quick breath. He doesn’t follow a preset pattern here, and will gladly stop his current actions if it means he gets to watch you drown. Take any damage and you’ll slowly sink to the bottom. Jump too soon and you won’t get the leverage on the spikes he’s throwing at you to break the water's surface. Arse. 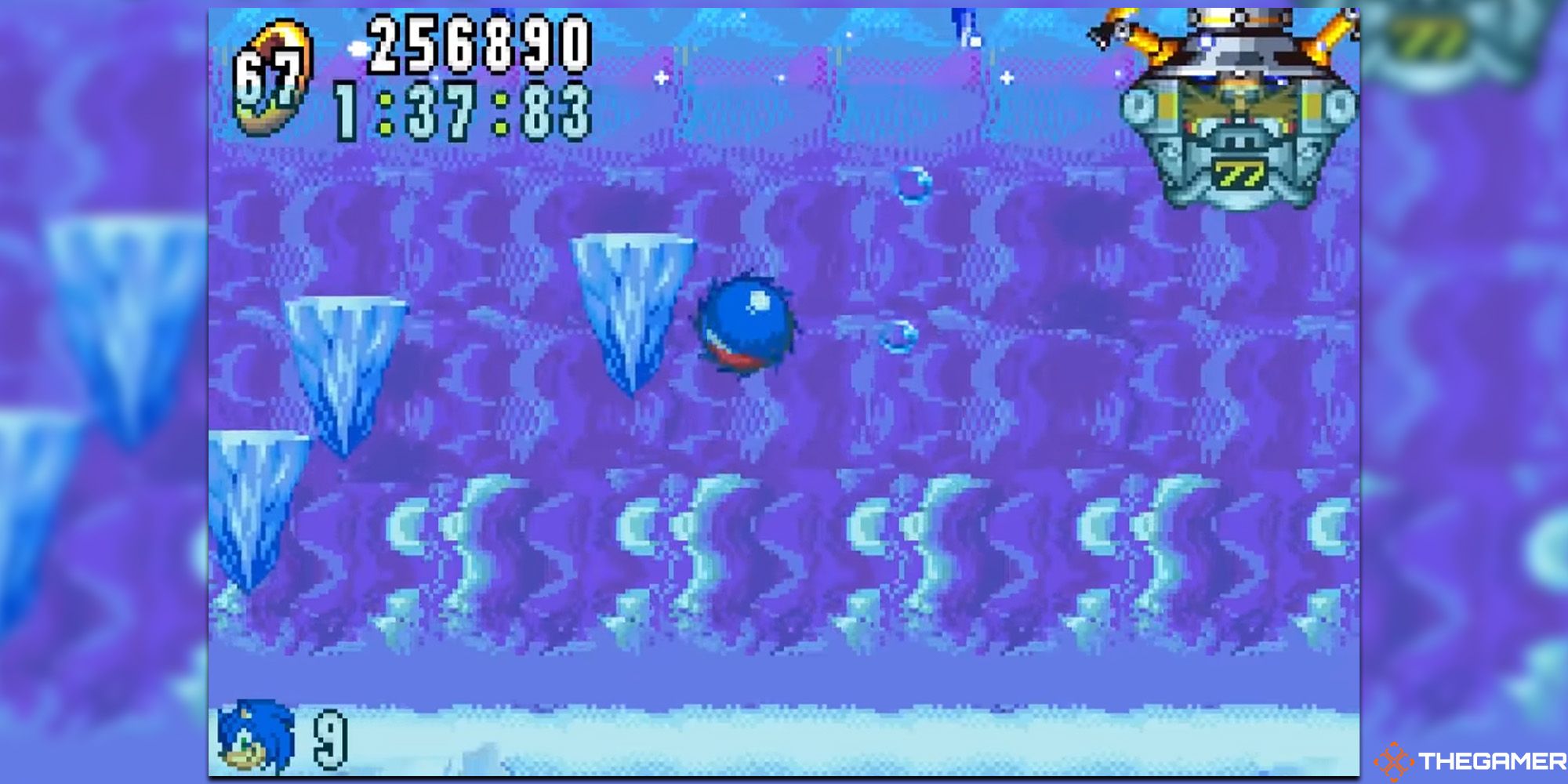 I won’t go over every boss after that, but trust me that it gets more and more nonsensical as the game goes on. A particularly great example of the design differences between Advance and the older games comes in the final level, where the first bosses from Sonic 1 and Sonic 2 are reimagined. Much like Sonic 1, Eggman will swing a gigantic wrecking ball between two platforms, and it’s your job to try and jump onto the platform and hit Eggman before the ball can get to you. Whereas before you had just enough time to pull it off in one clean motion, in Advance the ball moves ever so slightly quicker, making it a much more frantic and improvised battle.

People regularly call Sonic Advance the ‘true’ Sonic 4, and bang on about how they’re ‘basically the Mega Drive games’. At the most basic level they may be, sure, but these games are meaner. Don’t let the flashy new-Sonic design and his long legs fool you, this game wants you to suffer, and it’ll do it with the most imperceptibly minor changes to the formula it can possibly make. A slight AI tweak here, spikes a pixel higher there – who cares if Eggman moves two percent faster than the older games? Me. I do. 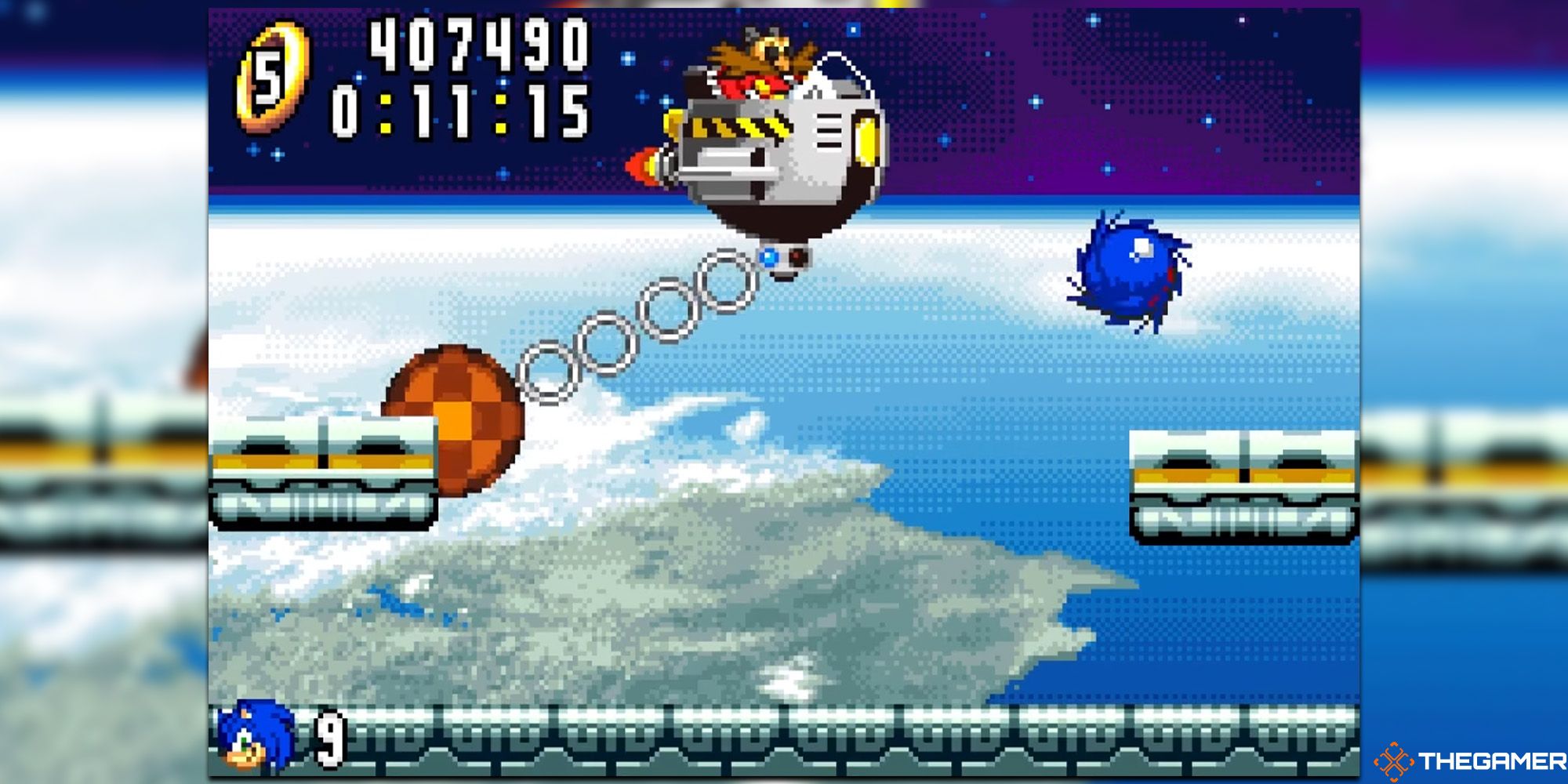 As I approach the end of Sonic Advance, I don’t see the lovable blue friend I’ve had since I was a toddler. I see a bastard game made by prick people who want to see me suffer. While this is probably what all those Mario fans deserved 20 years ago for sticking with a boring plumber for so long before hopping onto Team Blue Blur, it isn’t what I deserve or need in my life. I just want to go fast, collect rings, and not have to buy the half-finished Sonic Origins to do so. Sonic Advance makes me question everything about my gaming pedigree spanning 25 years, and even calls into question whether I truly am toilet-trained or not.