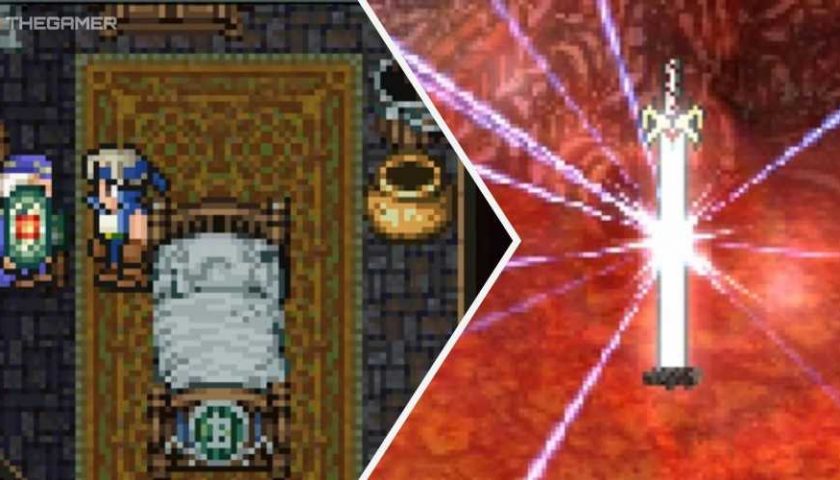 Ragnarok is, of course, a huge part of Norse mythology. And since Norse mythology is, let's face it, pretty cool, pop culture has absorbed the concept into a great many things. Squaresoft knew this as far back as Final Fantasy 3, naming one of that game's most powerful blades after the apocalyptic event. And so it's been ever since, with Ragnarok reappearing in some form in almost every entry since.

In Final Fantasy 6 Pixel Remaster, players are actually given a choice. They can keep Ragnarok as Esper — FF6's term for all those wonderful summoned beasts the series is known for — or they can turn it into a sword, so it's got more in common with most of its Final Fantasy brethren.

Of course, you won't have to wonder which path to choose for your shiny treasure if you haven't even found it yet. Here's where you can obtain the excellent Ragnarok in FF6 Pixel Remaster.

Where to Find Ragnarok in Final Fantasy 6 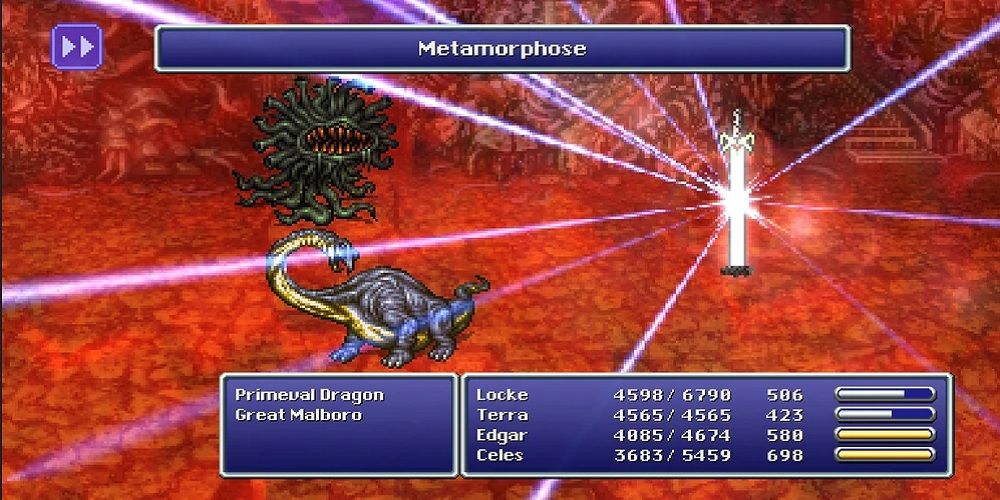 Before you can kill a brachiosaurus with it, you've got to know where to look for it. And you'll find your new best friend in Narshe during the World of Ruin.

But you can't simply waltz in there as just anybody, hoping to nab one of the greatest artifacts remaining in this broken world on the brink of further chaos. If you head to Narshe at any point before recruiting Locke, you'll note that nearly every building is locked. As everyone knows, we used Lockes to unlock locked doors.

Getting Locke back in with the rest of the gang requires completing the Phoenix Cave quest, the titular location of which can be found northwest of Tzen. Look for a gap up there among the mountains and land the airship nearby. On your way in, you'll have to split the party into two groups; note that this is a relatively complex dungeon but well worth the effort — not just to get our boy Locke back, but for a plethora of bonus items including, ultimately, Ragnarok.

Return to Narshe after all is said and done in Locke's World of Ruin episode. Break into the weapon shop, where the owner will reveal he's bumped into a peculiar form of treasure and knows not what to make of it. He wouldn't — it's a piece of Magicite! You'll know that telltale green diamond-shaped beauty anywhere.

A weapons shop owner to his core, the old man asks if you'd like to have a sword made from the Magicite. This is one of Final Fantasy 6's biggest decisions, as you can only have one of either the Ragnarok Esper or Ragnarok blade. Yikes.

Is Ragnarok Better as A Sword or Esper? 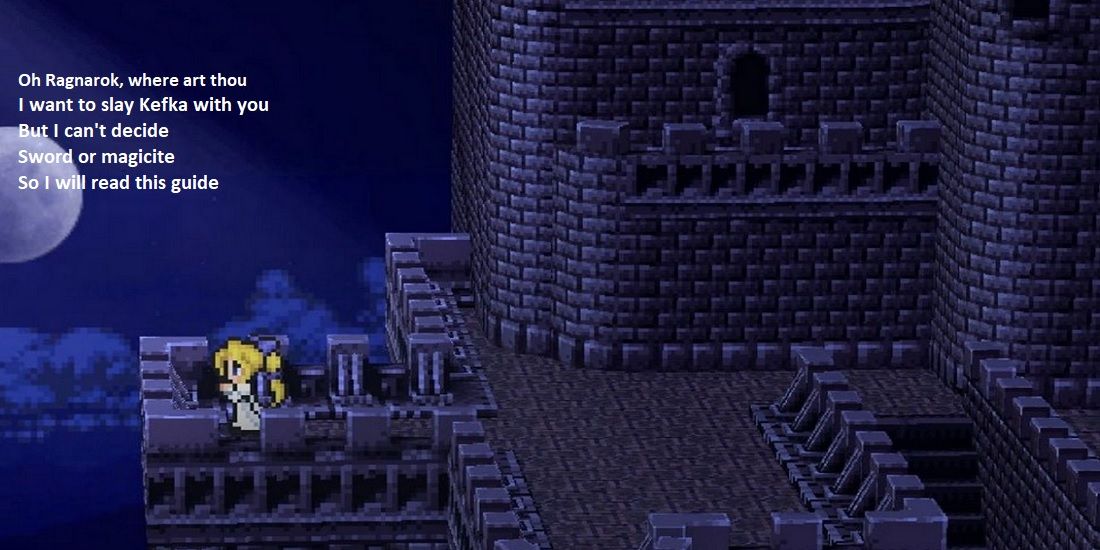 So, here's the whammy. Which is better, the sword or the Esper? To a point, it does boil down to personal taste. And it's ever so tempting to let this question go somewhat unanswered with a token "there's no right or wrong way to play" and underwhelm everyone.

You Can Get Ultima Elsewhere

But honestly, there kind of is a better choice. The Esper version of Ragnarok sells itself chiefly on the fact that it teaches the Ultima spell, which can almost be found no place else in the game. In a nice bit of comedy, the other way to learn it is through "purifying" a piece of equipment called the Cursed Shield that is also found via Locke's breaking-and-entering antics while you're here in Narshe.

Purifying the Cursed Shield is a pain, mind you. You must have it equipped for 256 battles before it becomes the Paladin Shield, and while it's on one of your characters they will suffer from so many bad status conditions you'll think there's a baby Malboro inside their chest. You'll certainly want to have that character equipped with a Ribbon the entire time. After those grueling 256 battles are up, the Paladin Shield not only proves its worth with superior stat boosts, but it also teaches Ultima. Fantastic.

It would be remiss not to mention that technically, there's a third way to learn the spell, but it's through reaching level 99 with Terra. She and she alone masters the fine art of Ultima at that time, but grinding to the max is hardly necessary in FF6.

You Can Only Get Lightbringer Through Ragnarok's Sword Form

As you've no doubt surmised, choosing the sword offers a comparably rarer gift. Not only is Ragnarok a fantastic weapon, but if you bet it at the Coliseum against a foe called Daedalus and win, you'll replace the blade with the even more powerful Lightbringer, the single best sword in the entire game.

There is no other way to obtain Lightbringer, and while you can technically steal Ragnarok from one of FF6's final boss phases, how much good can it possibly do for you at that point when Final Fantasy 6 Pixel Remaster lacks the postgame dungeon Dragon's Den that certain previous versions contained?

Ultimately, you're free to select the Esper Ragnarok and enjoy it to your heart's content — you can morph enemies into some fairly splendid items, in fact — but its main draw, the Ultima spell, isn't quite as snazzy as it seems. Whichever route you venture down, you'll have acquired something stellar with the help of Final Fantasy 6's thieving lad.