Sound Samples are just one of the many collectibles scattered throughout New York in Spider-Man: Miles Morales. They require players to pinpoint the exact location that a piece of audio was captured and record a new sample.

There are ten of them in total, with the first becoming available during the “Breaking Through the Noise” mission and the last being part of “Back to the Beginning.” The other eight can be recorded in any order and are listed here in alphabetical order.

Although the samples are marked on the map by a Prowler mask, these only give a general idea of where you can record the samples. You’ll therefore need to use your Spidey sense to figure out the exact sources of the sounds needed and the best spots to record them from. Either that, or you could just use this handy-dandy Spidey-guide(y). 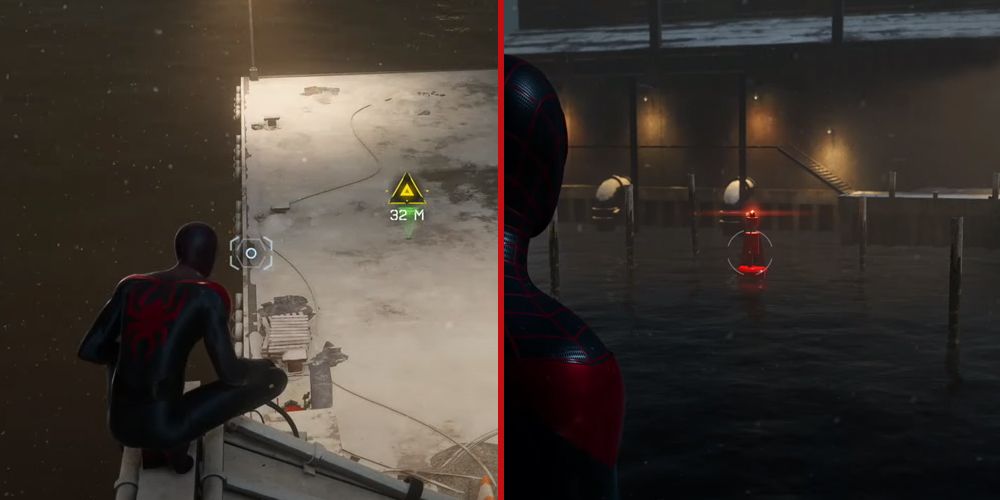 The “Breaking Through the Noise” mission serves as a tutorial for gathering samples and is part of the game’s main story. After speaking with Aaron, drop down and activate the green hologram and then zip over to the yellow containers on the right. The source of the sound is the red bell buoy floating out in the water to your right, so point the camera towards it, record your sample, and get ready for the fun to begin. 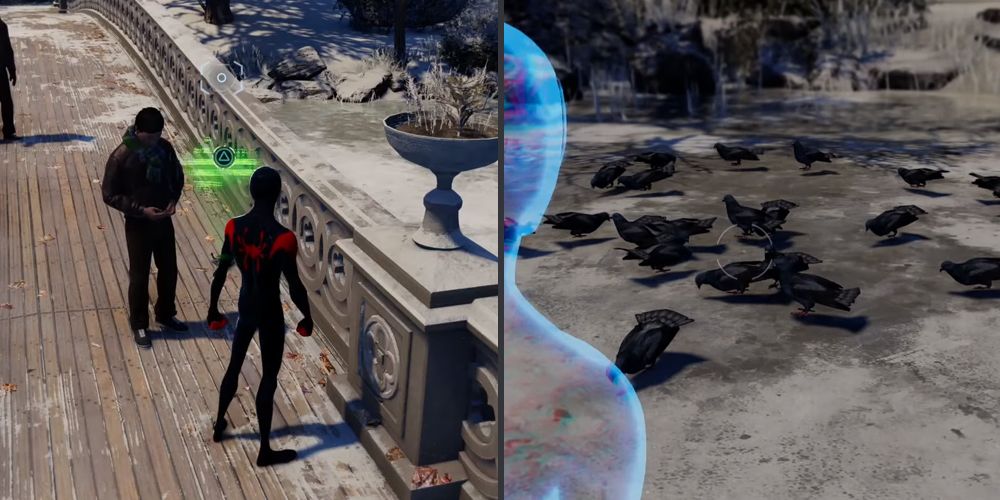 The sound sample in Central Park is fairly easy to locate, but actually capturing it will require a little bit of nous. Head to the location on the map and then drop down from the bridge onto the frozen body of water below. Thankfully, the game’s realism doesn’t extend to cracking ice just yet (either that or Miles is just incredibly light), but sadly, the nearby pigeons do react in a fairly realistic way. To prevent them from scattering as soon as you get close, activate your camouflage, sneak up to them and record the sample. If you accidentally spook them and they fly away, you’ll need to leave the area and come back. 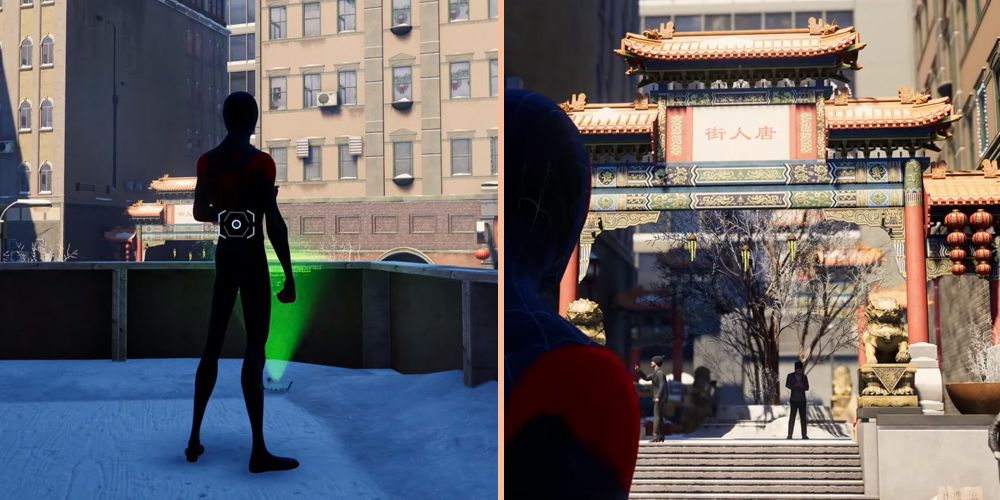 This one shouldn’t take too long at all. Make your way to the area marked on the map to trigger the hologram and then look for the large red and blue Chinese archway with the stone shishi lions underneath. It’s hard to miss, as it’s directly in front of the hologram slightly off to the left. Hanging from the archway are three sets of wind chimes and it’s the sound that they are making that you’ll need to record. 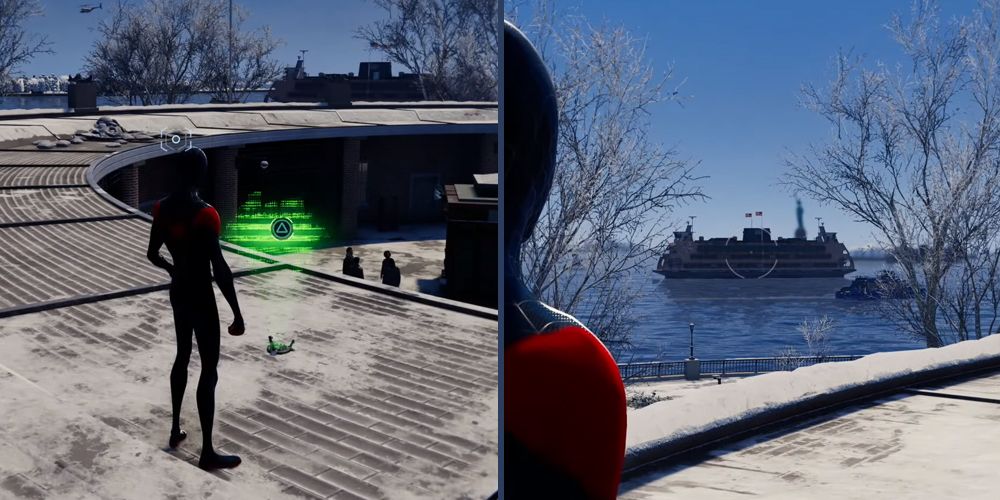 Those with keen ears will recognize the source of the Financial District’s sound sample straight away. For those who don’t, it’s the ferry floating out in the direction of the Statue of Liberty. Make your way around the roof on which the hologram is on and then have Miles stare out towards the ferry. If you’re having trouble getting the samples to line up, you can drop down and make your way a little closer to the waterfront. 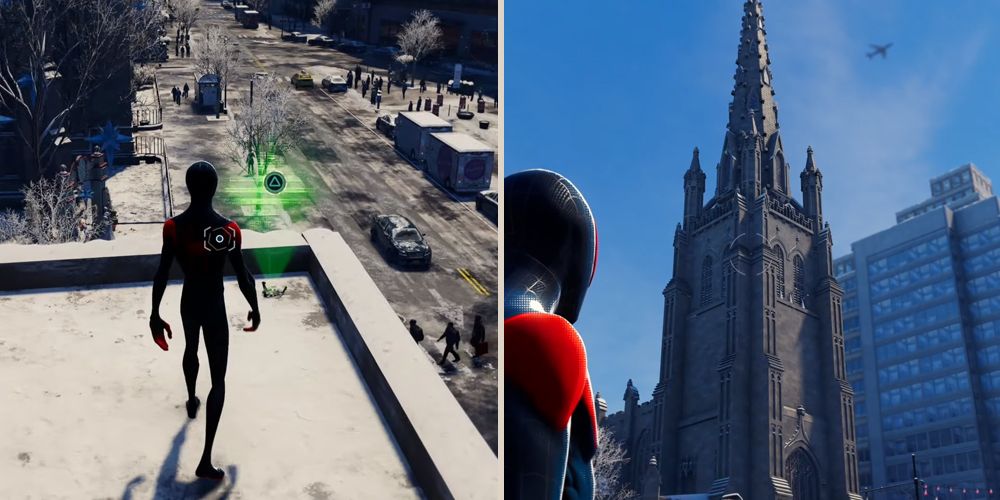 There are a few different locations from which you’ll be able to record the sample in Greenwich, but the easiest way to get the distance right is to jump onto the green dome that covers the stairs down into the subway. Once you’re in position, look up towards the steeple of the church and hit the button to capture the sample. 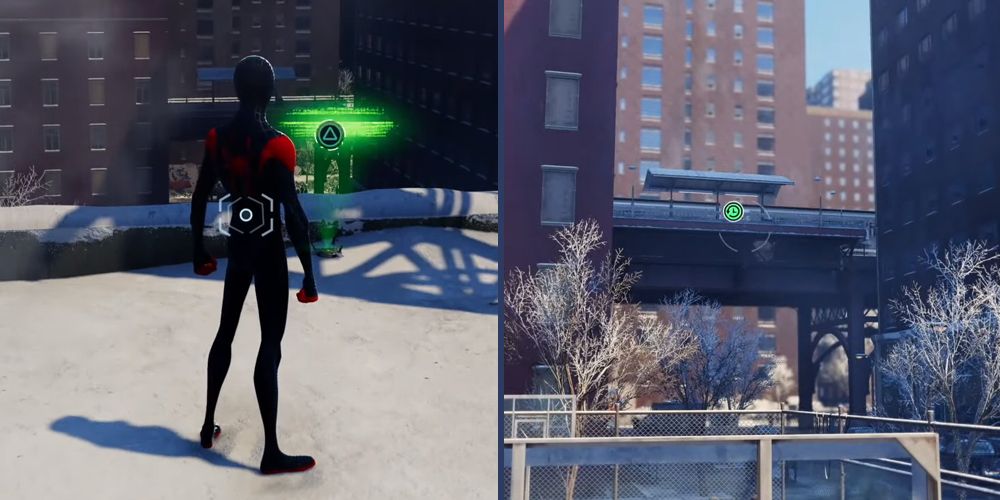 Tracking down the source of the Harlem sample is easy enough, but you might have to be patient when it comes to recording it. You should be able to see the train tracks directly in front of you when you activate the hologram but you’ll need to get a little closer to get the sample. Drop down onto the diagonal street just below and then face the tracks. Thankfully, New York’s trains run pretty frequently, so you shouldn’t have to wait too long for one to rumble through. Just make sure you’re ready to hit record when it does! 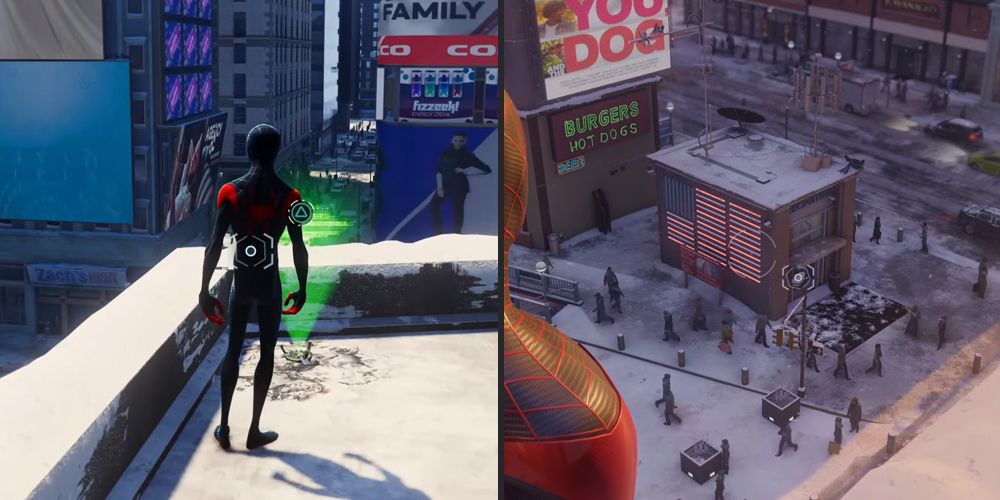 Players can find Midtown’s sound sample slap bang in the center of Time Square. Head to the location on the map and then look for the neon sign that resembles the American flag. It’s on the side of a small building down and to the left of the hologram’s location (if you’re looking out from the corner). The easiest place to record this one is from the very same roof that the hologram is on, although you can get a little closer if you’re having trouble getting the samples to match up. 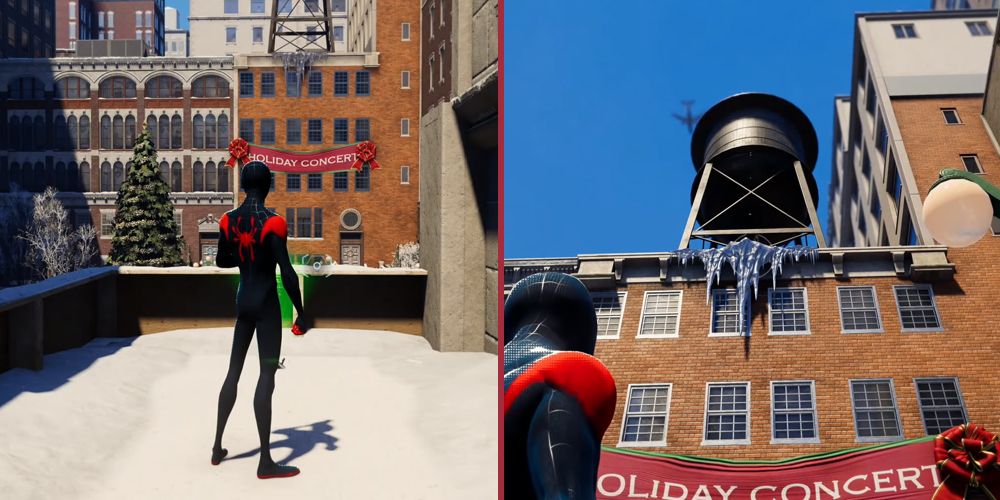 The sound sample on the Upper East Side is directly opposite the hologram, so once you’ve activated it, look for the big red “Holiday Concert” banner and zip your way over to the area just in front of it. On the roof, you’ll see a water tower and it’s from this that the water from the sample is dripping. You might need to tweak your position a little to get the samples to line up perfectly as there is quite a bit of background noise to contend with, but it shouldn’t take too long to find a good spot. 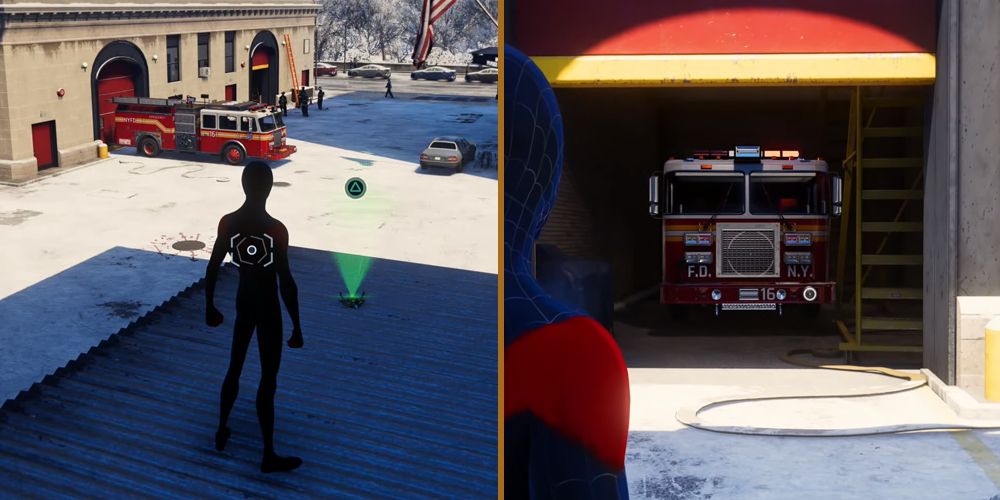 Make your way over to the Upper West Side and activate the hologram to get the ball rolling. Next, hop down to the area outside the fire station on the left and find the fire truck that’s idling inside. It’s pretty difficult to miss, but for those having trouble, look for the big orange ladder that’s leaning on the side of the building. Once you’ve found a good spot, point the camera at the firetruck and hit record. 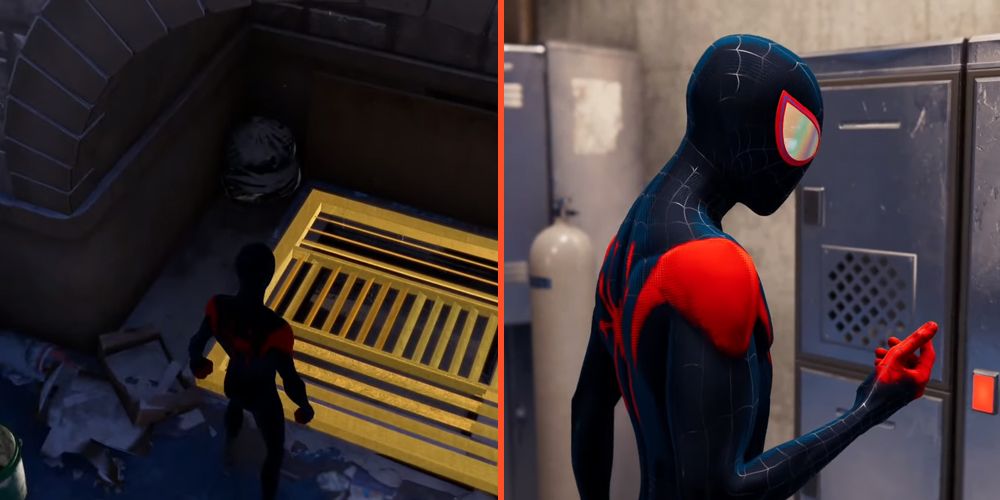 After capturing the first nine samples, Aaron will get in touch and give you the coordinates for the final location. Make your way over to the abandoned subway tunnels in Harlem and drop down into the hideout below. Once you’re inside, head over to the lockers that are against the opposite wall and examine the post-it note.

Miles will use his sampler to play The Davis Brothers Mix, which is made up of all of the samples collected so far. This will trigger the frequency lock on the locker, allowing Miles to get his hands on the Purple Reign suit that’s stashed inside. The “A New Home” trophy should unlock while you’re listening to Aaron’s message (the “Deep Cuts” trophy should have unlocked already after you recorded your ninth sample).

NEXT: 10 Awesome Areas That Most Players Will Never Find In Spider-Man: Miles Morales 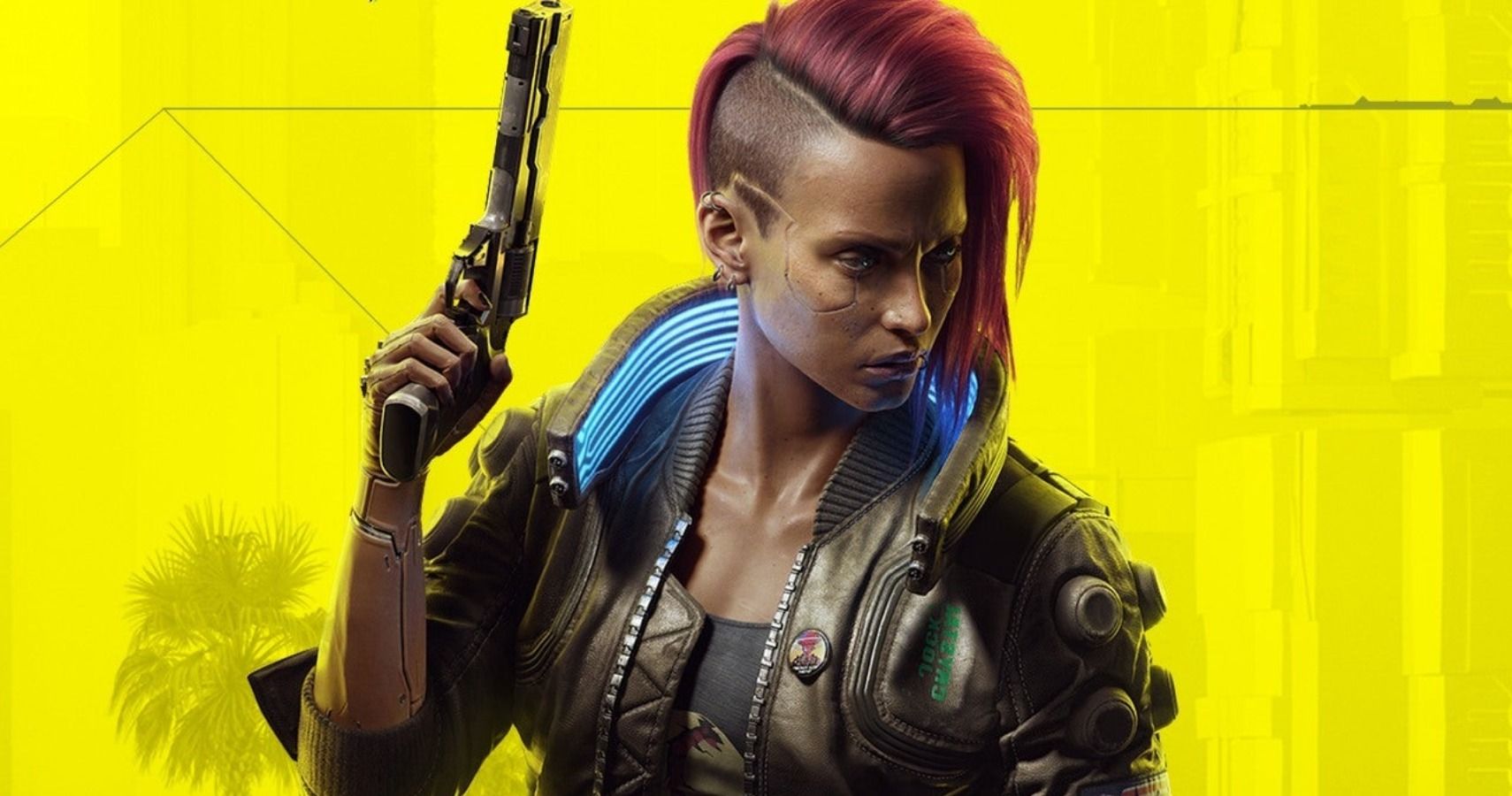