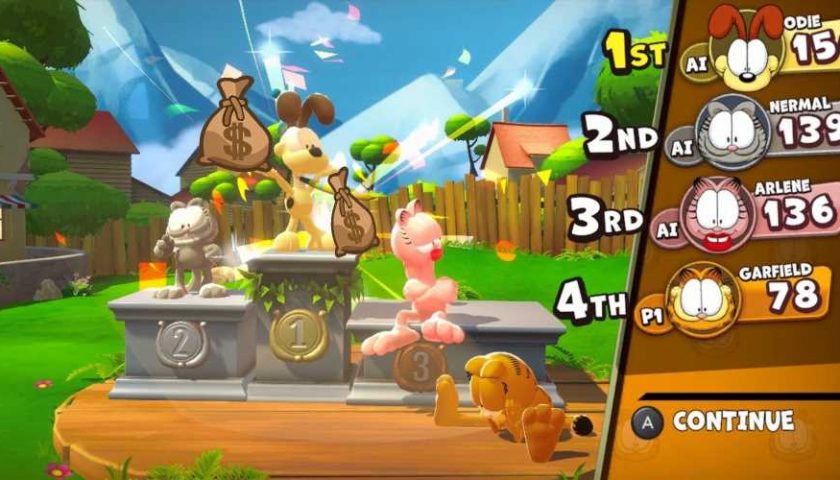 I wish it wasn’t this way, but at some point, several family members found my Twitter account. Maybe I should have blocked them before they had a chance to follow me, but I didn’t. As a result, I wound up at a family gathering a while back being faced with a question I couldn’t answer no matter how hard I tried. “Lex, do you actually like Garfield or is it ironic?”

For people that don’t spend too much of their free time online it can be surprisingly hard to grasp not only liking, but spending so much of your free time learning about something that is absolutely terrible. It’s like trying to explain to someone who doesn’t watch that many movies why Birdemic or any Neil Breen movie is a great way to spend an evening. It’s like trying to convince someone who only plays Call of Duty and FIFA why a speedrun of Superman 64 is a stunning achievement. To them it just seems like a waste of time, but to me, it’s so much more.

So, do I like Garfield? Yes. And by that, I of course mean ‘no’. But I’m a fan of hating the Heathcliff rip-off and make it my business to have a folder of reaction images taken from his comic and to research the incredibly cynical and business-fuelled creation of this character. I truly think everything about Garfield, Paw Inc., and the multi-billion dollar merchandising industry that surrounds them is awful. But I love that. It’s the peak of our failure as a society, and it fascinates me.

It’s worse than bad Sonic games having adoring fans. It’s worse than boring Minions movies making millions. It’s worse than nonsensical AI generated YouTube videos created to feed off children desperate for distraction and parents in dire need of a break. Worse than all of that is Garfield. The unfunny daily, three-panel comic has run every day for going on 45 years – through wars, international tragedies, and a pandemic – it is always there with a joke that lands about as hard as a feather. Garfield makes money because it’s recognisable, and it’s recognisable because it makes money. Garfield is the end point of Intellectual Properties – just a thing that only exists and makes money simply by continuing to exist. 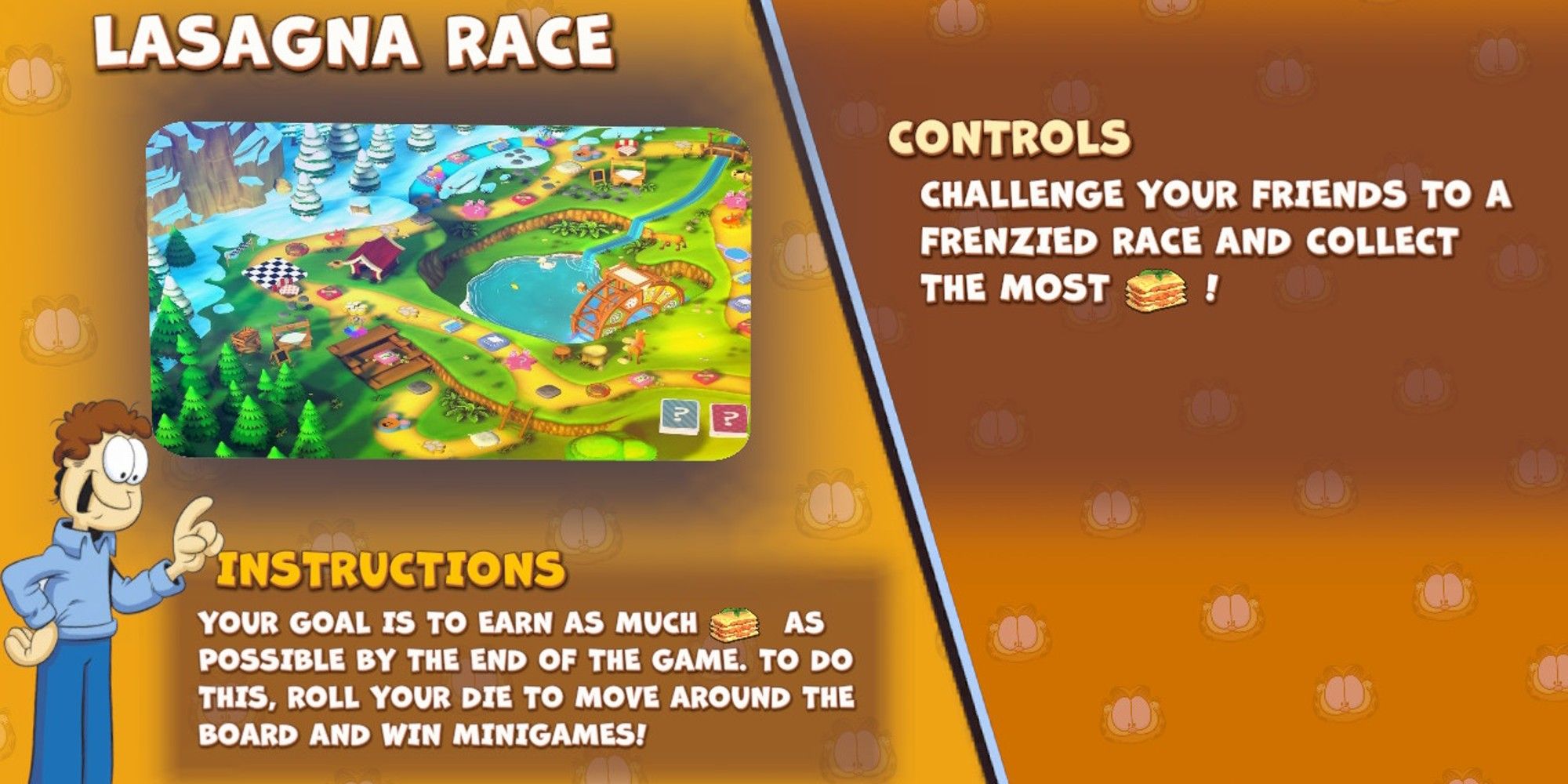 So, it’s somewhat fitting that the latest video game representation of the second-best tabby cat on the funny pages is a Mario Party game in all but name. If any series represents unwarranted popularity and blind enthusiasm for a product by hitching itself to a mascot is it not Mario Party?

If you couldn’t tell, I also do not like Mario Party games. You play cumbersome minigames for 60 seconds only to then have to sit for several minutes while you and three other players make your way around boring board game tables, staring at dice and nonsensical cartoon items for minutes on end, trying to assign strategy to a game obsessed with randomness.

However, having said all this, after playing the new Microid’s published Garfield game, Garfield Lasagna Party, I can’t help but finally understand Thanos a bit better. I now glance over at Mario Party and, you know, perhaps I was too harsh on you, little one.

In some ways, Garfield Lasagna Party is no worse than any of the plumber’s parties. While for the most part, it is as boring and slow as those games, it also feels like more of a game of skill because the minigames are so streamlined, simple, and bland that there’s very little randomness to muck anything up. Yeah, the minigames that ask you to move in three dimensions around a house where all four animals have collision and the doors are only one animal wide are tragic, but so is Rockin’ Raceway in Mario Party 3.

I’ve always disliked Mario Party for many reasons, but it was never cynical. Even if the minigames controlled poorly, and the randomness was unfun and everything moved just a bit too slow, at the end of the day it was still a full product with a lot of content, made with a clear intent and bountiful creativity. Even if none of it was fun, there were things there to engage with. 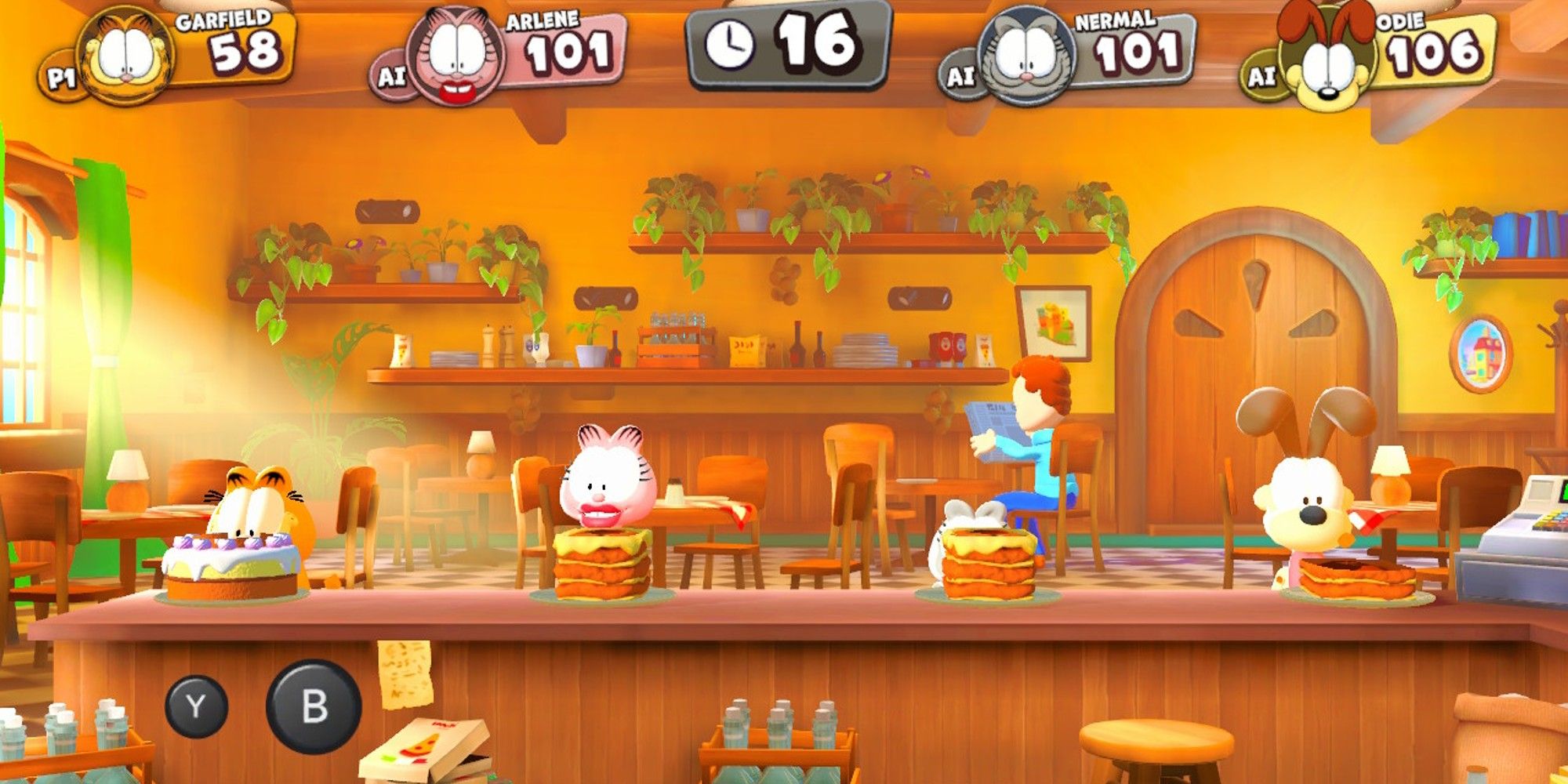 This is not to say that a budget game needs to have as much packed into it as a first-party Nintendo game, of course not. The real problem with Garfield Lasagna Party isn’t that there are only four selectable characters, one map, one actual game mode (and then two other modes that just let you play one minigame or queue up multiple minigames at once) or any of its other limitations. It’s the fact that someone, somewhere decided that a game like this was worth charging $30 for.

Originally, I wasn’t even going to bother writing this, until I checked the price. Believe me, I’m the last person that wants to relitigate a video game price debate but this isn’t that, because Lasagna Party isn’t a game, it’s a product. A boxed good that has been cynically produced, not art that has been created. And once it was manufactured, by an overworked dev team, that was probably considered as disposable as this game, with the bare minimum amount of content to constitute something that can be sold on a storefront, the highest possible price was decided upon by looking at what could be gotten away with.

I hate this game. Just like I hate Garfield, I hate this game. While Garfield the brand shows us the failure of media that is only popular today because it was popular yesterday, Garfield Lasagna Party shows us just how companies view video games. Packaged goods to be churned out. Storefront space awaiting an IP to be attached to it. Unfunny syndicated cartoons, published everywhere, sold for millions, and enjoyed by no one.