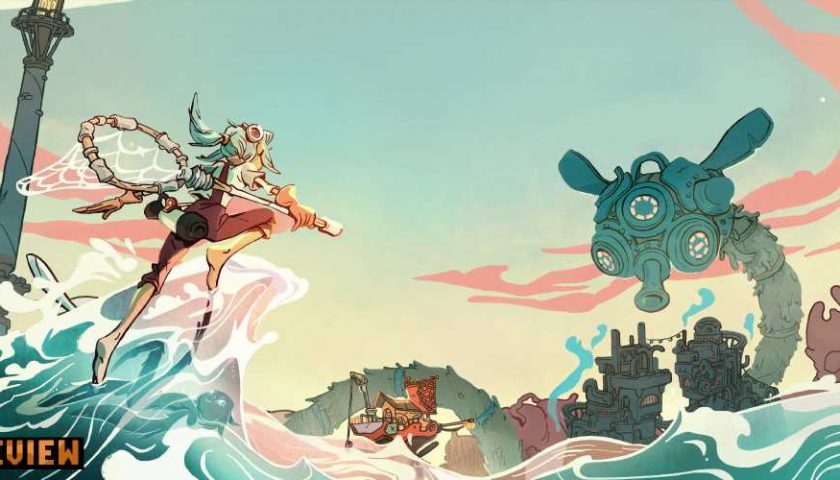 I feel bad saying this now it’s dead, but one of my greatest gaming shames is never giving Google Stadia a try. Aside from the fact my rough internet makes streaming services a bit of a gamble, most of the games on Stadia were just ports of ones that I already owned on consoles that wouldn’t have me nervously glancing at an FPS counter the entire time I’m playing them.

There was one game in Stadia’s library that stood out to me, though – Wavetale. Looking like a combination of Solar Ash and Foster’s Home For Imaginary Friends, Wavetale’s chill wave-riding PS2 platformer vibes really gelled with me when I first saw it, which made its Stadia exclusivity worrying as the platform approached its death knell.

Thankfully, developer Thunderful Group hasn’t let Wavetale become a lost Stadia relic, and new console ports have finally given me a chance to try it for myself. Although it has some technical issues and won’t be of interest to anyone looking for a challenge, Wavetale remains a charming platformer that’s all about good vibes. 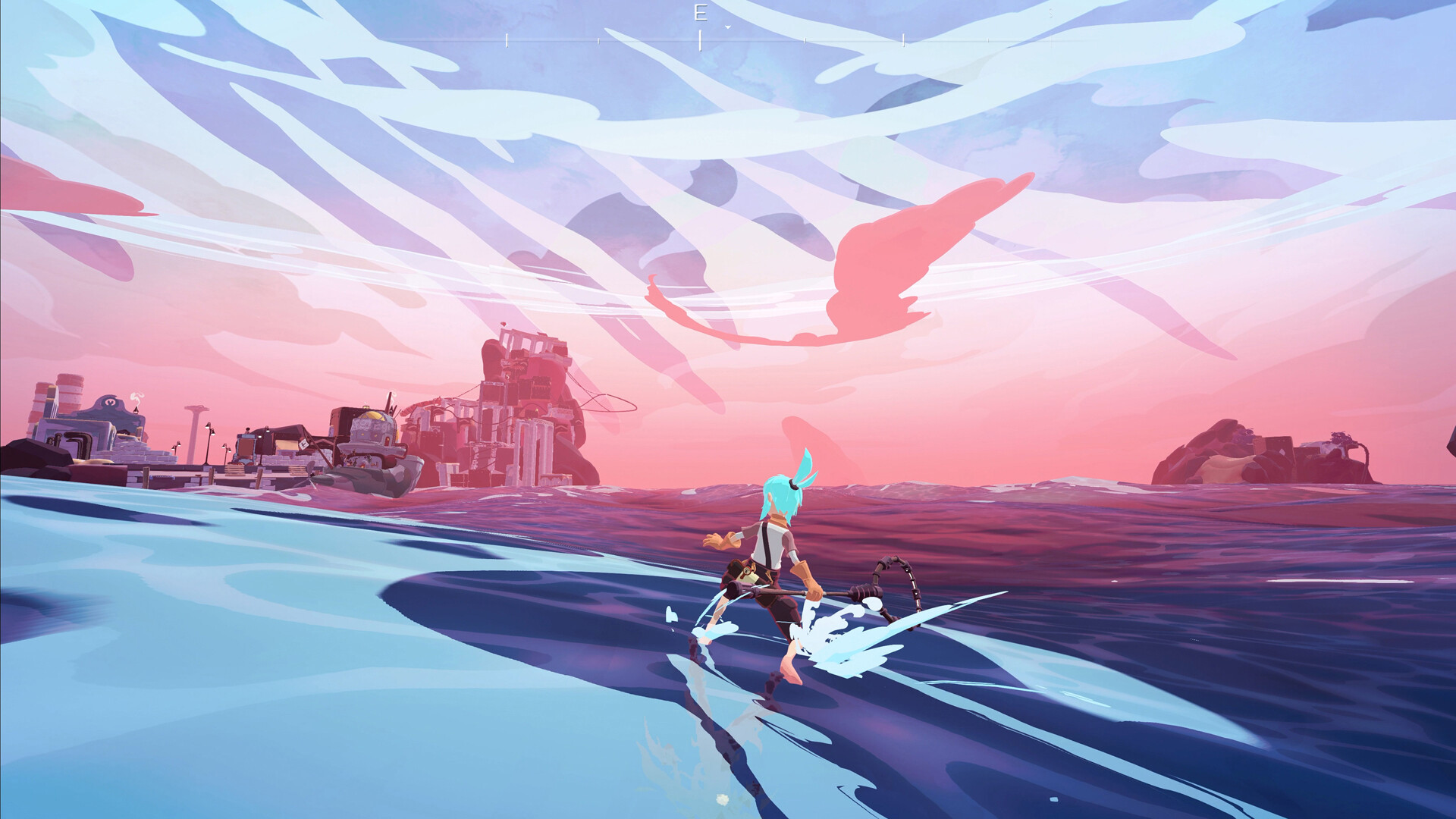 Wavetale has you taking control of Sigrid, a young girl who lives with her tough-as-nails grandma on a small island in Strandville, a world resembling ours that was nearly completely flooded. When a mysterious darkness begins to take over the town’s inhabitants, Sigrid sets off to help with her new ability to skate across the sea thanks to a mysterious shadow doppelganger beneath the waves. See, the vibes are already mighty good.

While there are some twists and turns in Wavetale’s story (including one that you’ll see coming from a million miles away), the story’s standout quality is the relationship between Sigrid and her grandmother. Sigrid’s curiosity about the world is met mainly with negativity from her granny, who just wants to protect her from all of the dangers of her flooded universe. As you expect, venturing out into this flooded world is the last thing she wants for her granddaughter.

Seeing the two’s complicated relationship evolve is the highlight of Wavetale’s story, but the whole cast is strong here thanks to the overwhelming good vibes they exude. Aside from the obvious secret villain, everyone in Wavetale is so stereotypically British and charming that it’s like being pulled into a Biff, Chip, and Kipper book. 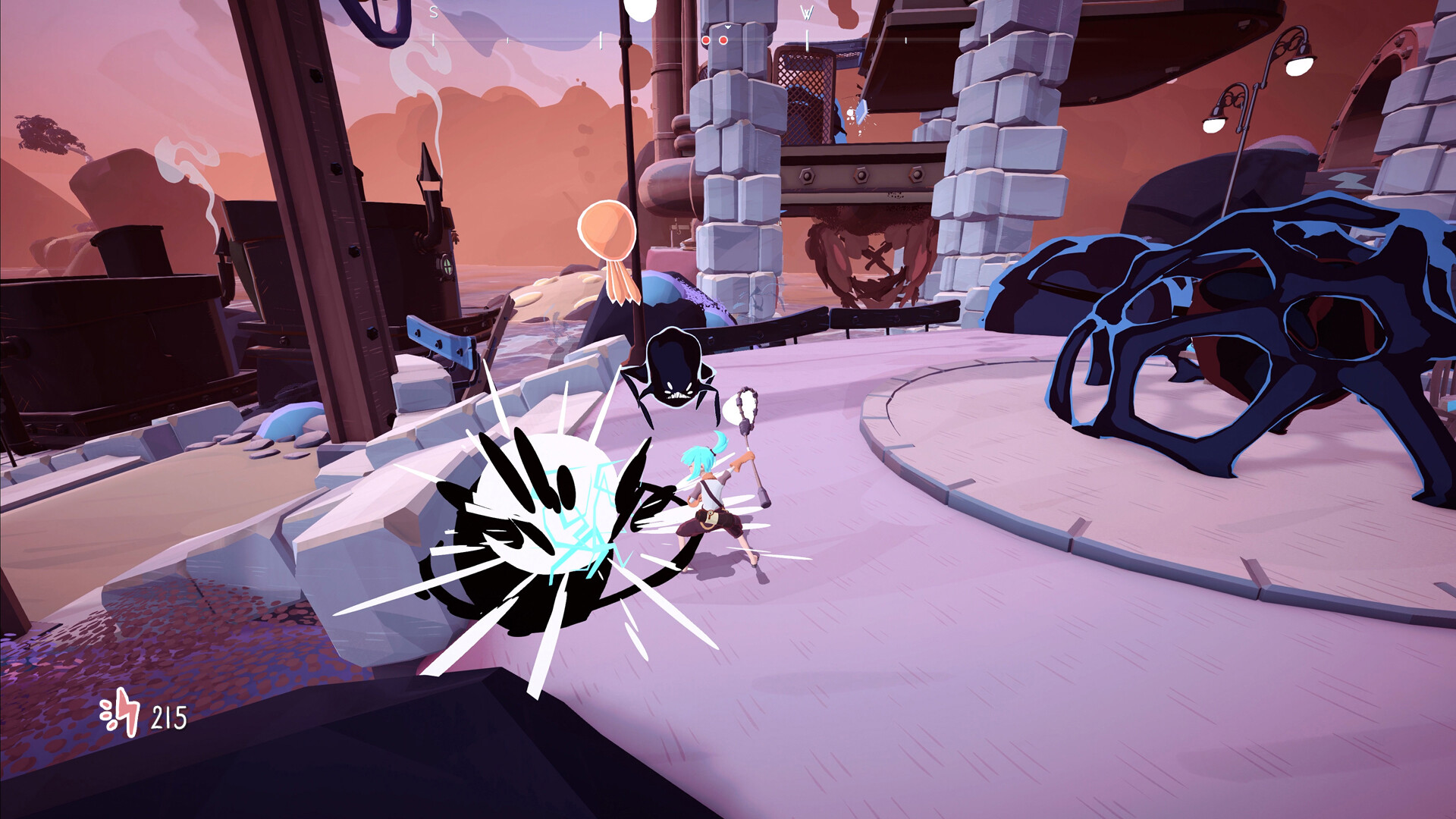 These good vibes carry over to Wavetale’s gameplay too, with its easy-going platforming and forgiving difficulty curve.. Sigrid has a ton of moves at her disposal, like a near-infinite glide and a grappling hook that practically skips most platforming challenges, which makes getting around and collecting sparks (think Mario’s stars and you’re on the right track) for objectives a breeze.

The big thing separating Wavetale from being little more than a simplistic platformer is Sigrid’s ability to skate on the waves. I mentioned Solar Ash earlier thanks to its similar cloud-skating ability, and that’s absolutely a compliment because Wavetale is at its best when you’re on the open sea skating towards an unknown destination, excited about the discoveries your eventual locale might hold.

Skating on the sea is fairly simple and only requires you to hold a button down and move, although there’s a nice flow to it when you mix in some dives, charged jumps, and eventually have to go up against rougher waters that bob you up and down more as the tide grows tempestuous. 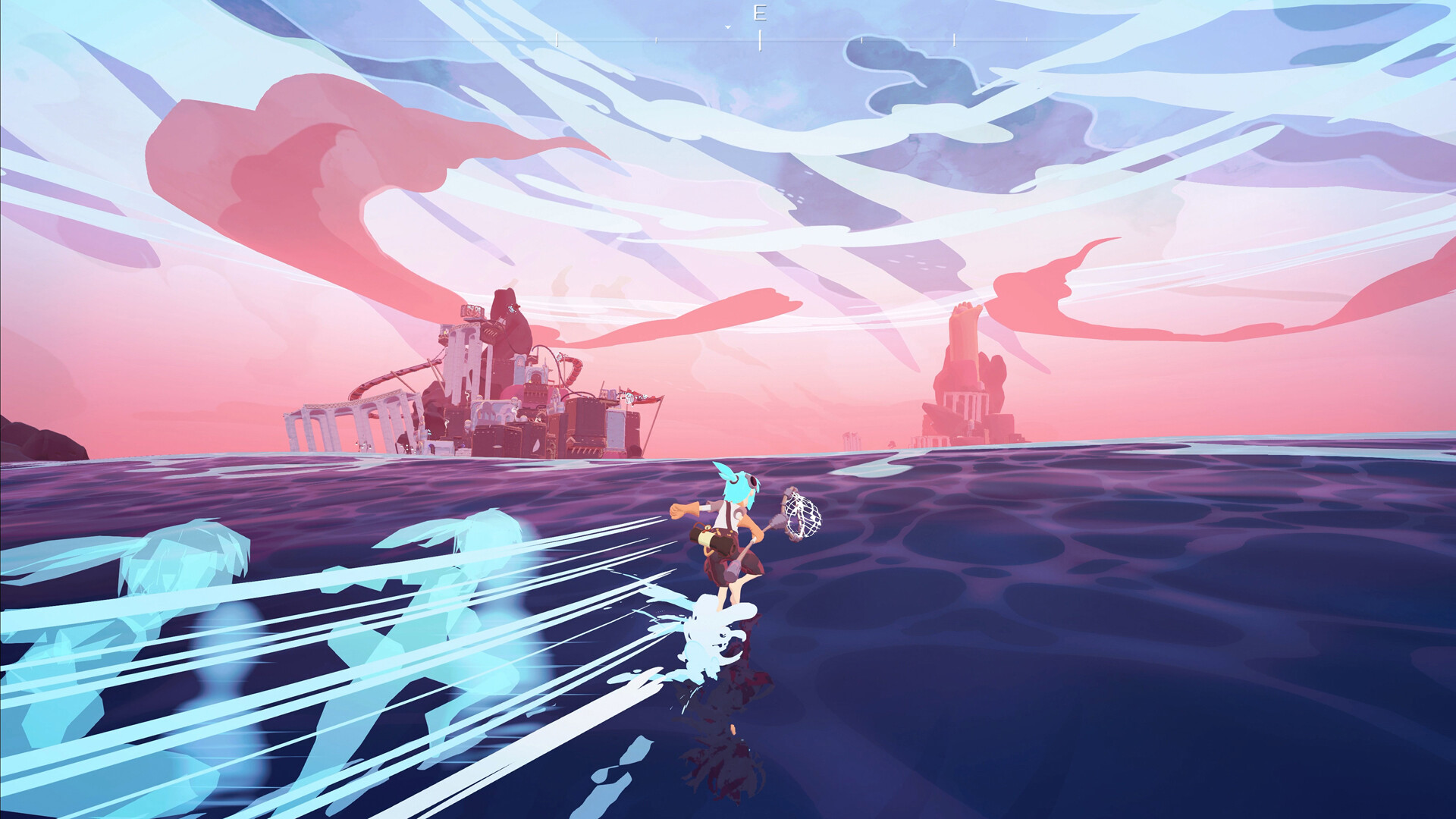 These moments showcase how gorgeous Wavetale really is, as Sigrid’s bold colours stand out against the pale blue sea and little glowing fish swimming beneath the waves. The art style here is somewhere between Foster’s Home For Imaginary Friends and the works of Roald Dahl, and it never fails to put a smile on my face.

As great as the movement and simplistic platforming is, it can feel a little too simple at times. There are pretty much zero consequences or real danger to go up against, save for basic enemies that take a few swipes to defeat, which makes Wavetale feel a little like it’s on autopilot, especially when using the grapple hook to do the platforming for you.

You’re also mostly just going from place to place to either fetch or fix something, with little variety in objectives. It feels like this simple vibe is key to Wavetale’s identity, but its graphics, world, and characters provide enough of it that I would have been happy to see it mix the gameplay up a bit and show some teeth to make the adventure more worthwhile. 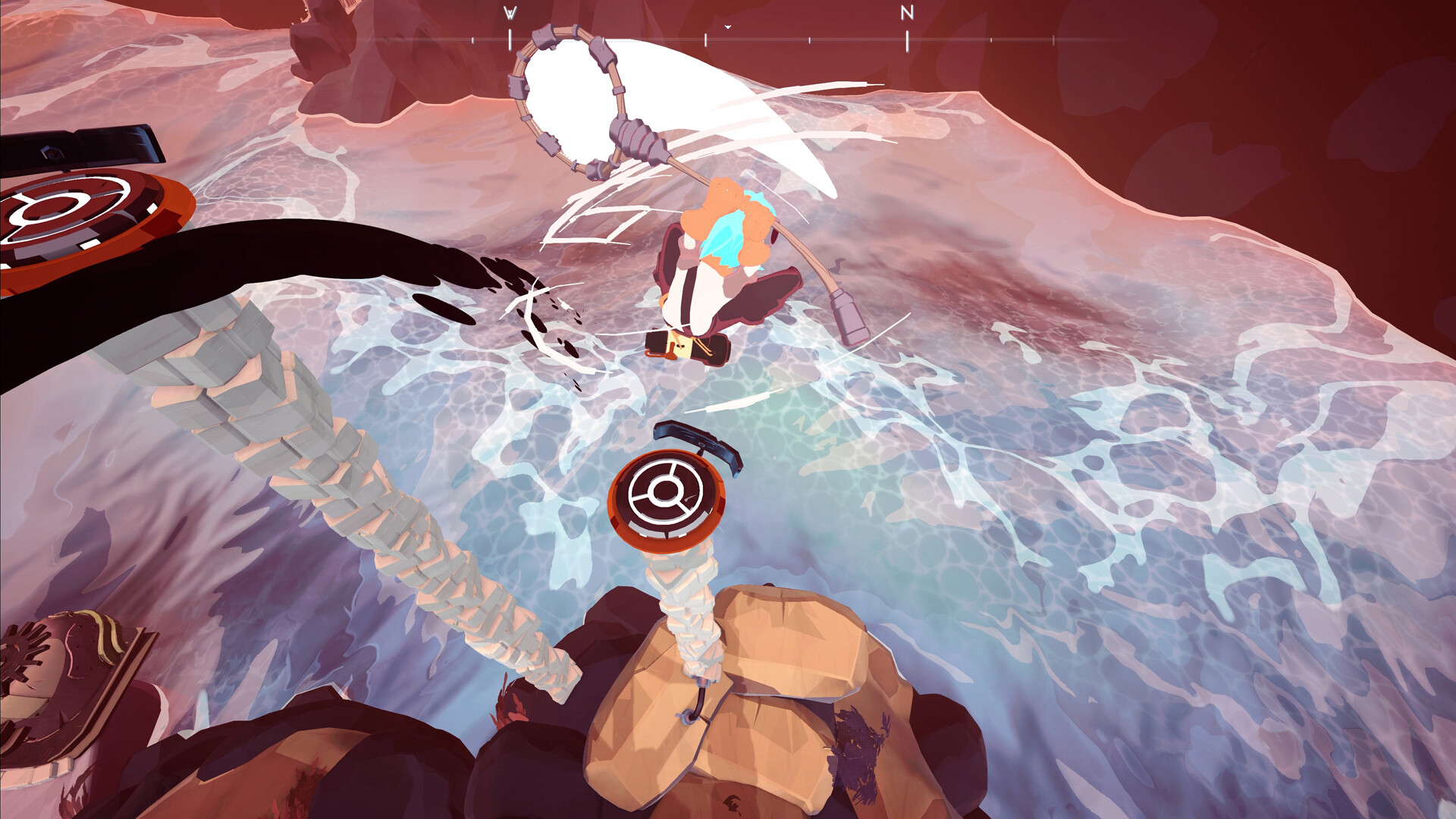 A fear of technical issues ruining the experience is what stopped me playing Wavetale when it first released on Stadia, but sadly the PS5 version is plagued with bugs and glitches. Throughout my playthrough, I had constant screen-tearing, random framerate drops, and audio clips not playing when they should have been, most noticeably during combat.

I also had problems with objective markers not showing up, collision when attacking enemies feeling noticeably delayed, and a few instances where I could bypass platforming altogether by climbing the environment like I was jumping up a cliff in Skyrim. Okay, I didn’t mind that last one so much.

None of those issues were particularly game-breaking, but they do make Wavetale feel unfinished and like it’s only just holding itself together, which feels especially weird considering the technological leap from Stadia to modern consoles. They’re all issues a patch can fix, but as it stands, Wavetale is a bit of a leaky ship right now.

Technical issues aside, Wavetale is a charming, chill time with beautiful visuals that’s perfect for winding down. It’s a little too simple and chill for its own good, but I still loved gliding along the sea and taking in what Strandville had to offer. If you're looking for something a little more relaxing than saving Ragnarok this Christmas, Wavetale might be the one for you.

Wavetael is available on PS4, PS5, Xbox One, Xbox Series, Switch, and PC. We tested the PS5 version for this review. Review code was provided by the publisher.