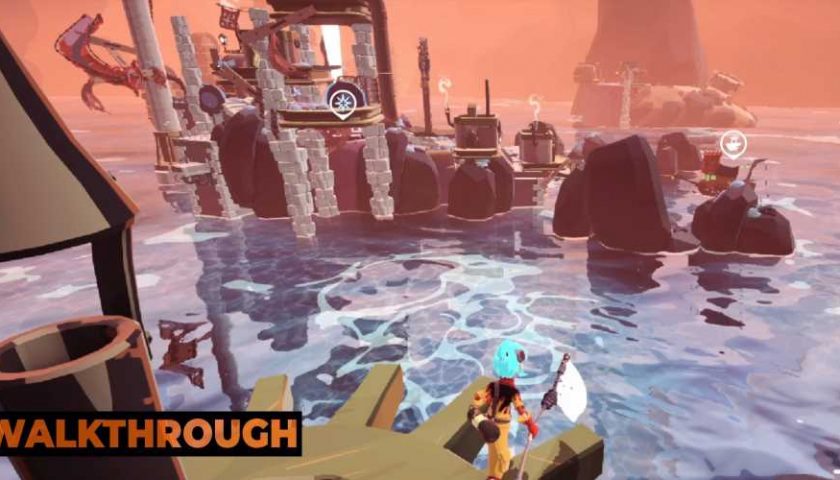 While it seems like the world of Wavetale is very small at the beginning, new areas open as you progress in the main story and run more power back to the lighthouse in The Night Orchard. After finishing the main quest at The Plaza and Sleepy Triplets where you meet many interesting people, you will meet the pirates next.

While the quests before Pirate's Parley were quite easy-going and intuitive, the real trouble will start from here since you'll be fighting head-on with the serpent. Your goal is to win the pirates over since you need their help with a weapon that can be used on your enemies.

How To Get Through The Dead End 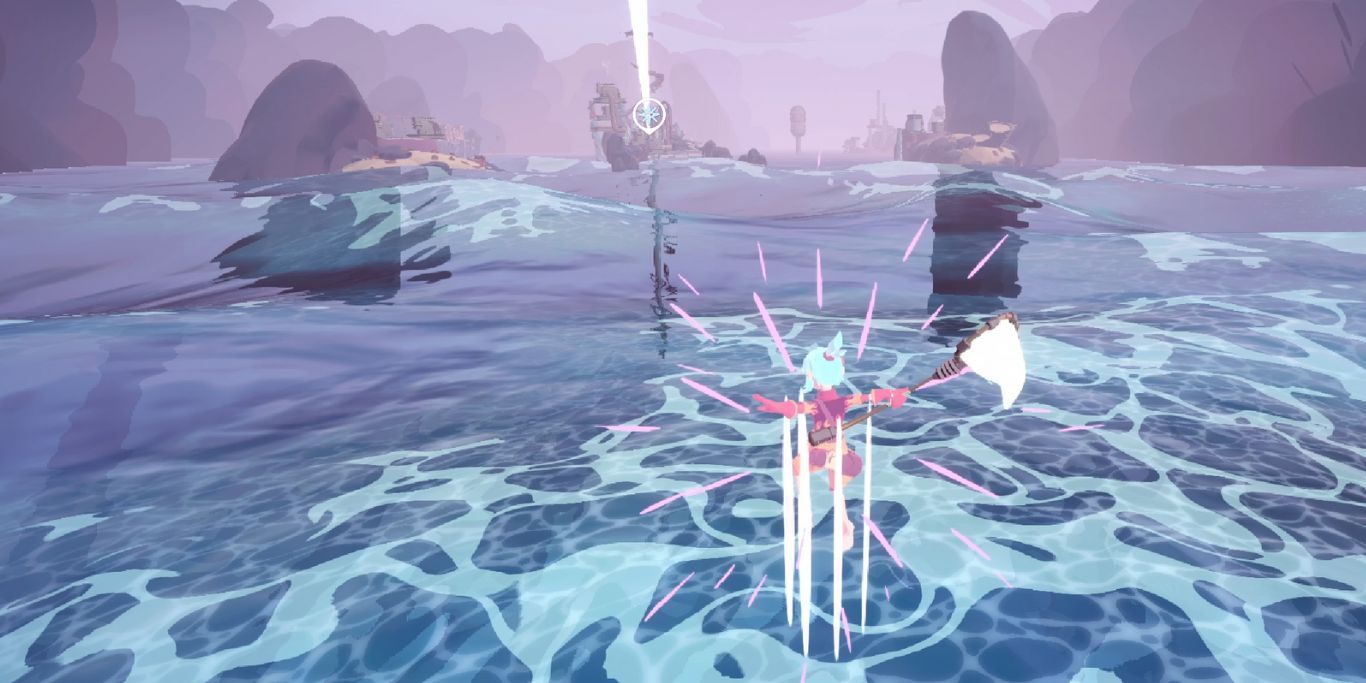 While grandma mentions that it'll not be easy to talk to the pirates, the path that you need to take to reach them is also quite hard and full of obstacles itself. The Pirate's Parley quest will start as soon as you flip the main switch at the lighthouse toward the end of The Sleepiest Of Triplets quest.

Grandma will go along with you this time, and you have to travel through the path to reach Candle Hill. You can either jump on grandma's ship and wait until you get there, or go along the waves with your shadow friend.

There's no requirement to stay super close to Doris' ship, so you can take your time and explore the islands on your path. 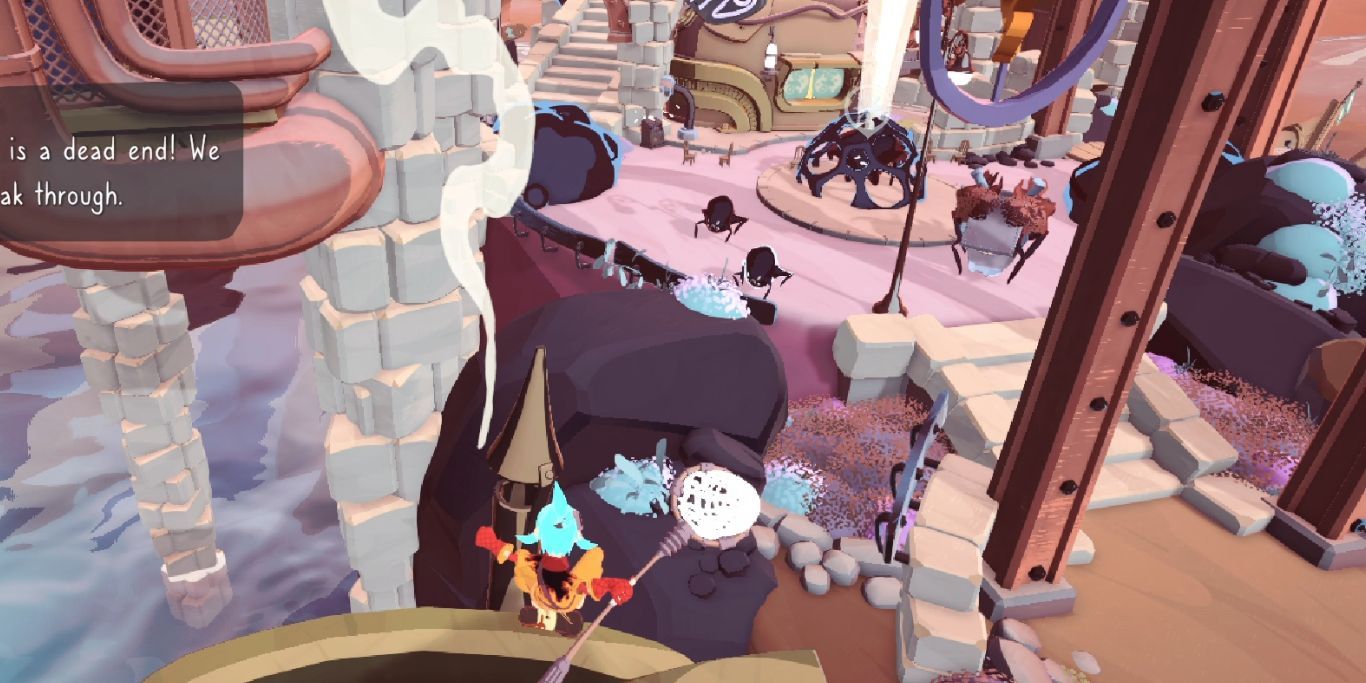 Once you reach Candle Hill, there'll be a dead end since the path ahead will be covered with black fog. You will see a beacon of light on the structure in front, and there'll be a gloomed person trapped inside a cage. Defeat all the enemies around them and free the person to progress the quest. 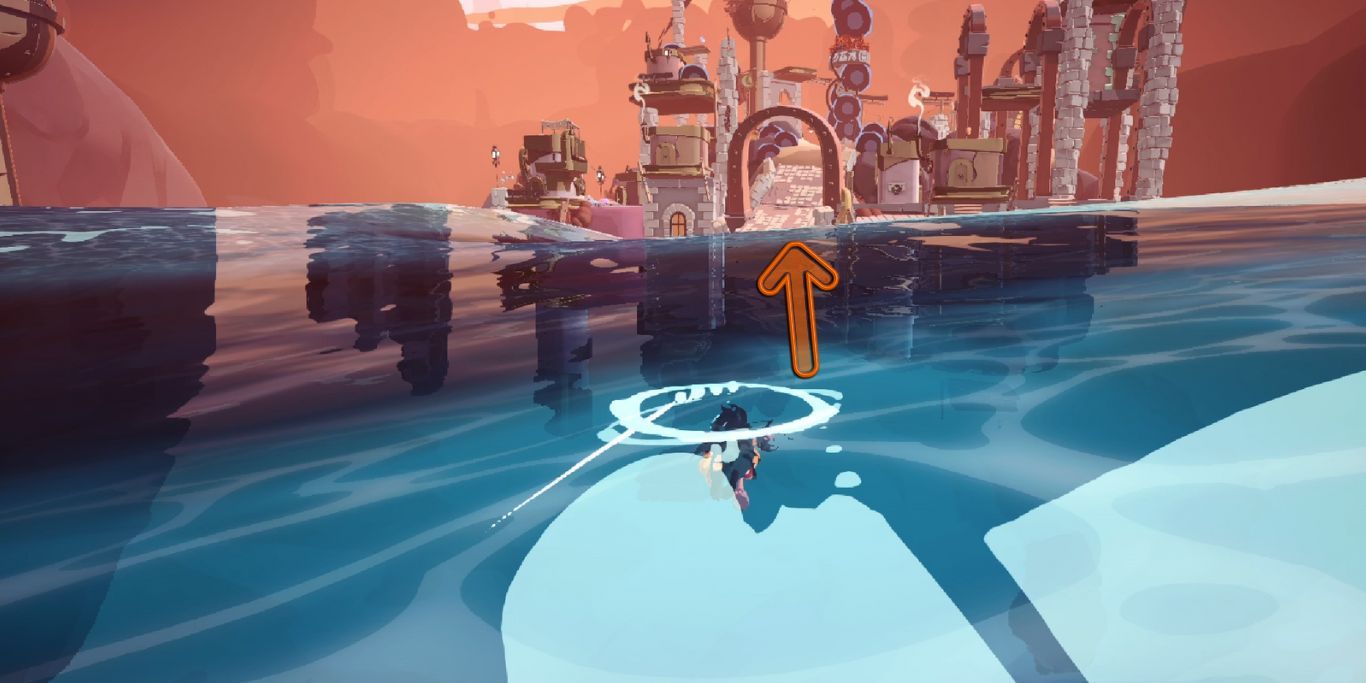 After talking to Charlie, you have to go to the checkpoint and boot up a certain generator. There will be a doorway leading into the structure when you get close, but the entire place will be covered in gloom. After entering and reaching the tower in the middle, you'll see a path of wooden platforms leading up to a brown generator.

This path starts on the back-right side when you're entering the island from the main door, but you can also get to the wooden platforms by jumping on top of different buildings and then hovering over to them. 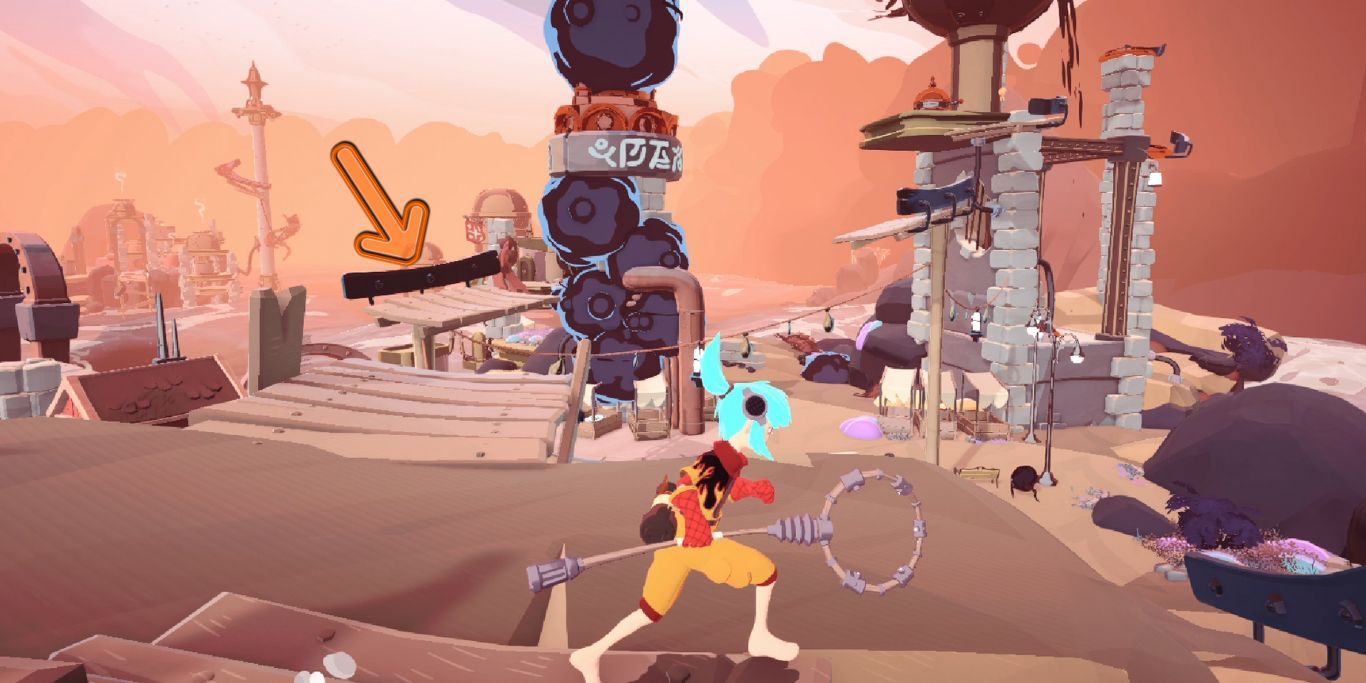 Activating the generator will activate multiple launchpads in the area that you can use to get to the top of the tower beside it. At the top, you will find a switch that will clear the gloom on the middle tower and run the power back to the main area. You can head back and talk to Charlie once this is done. 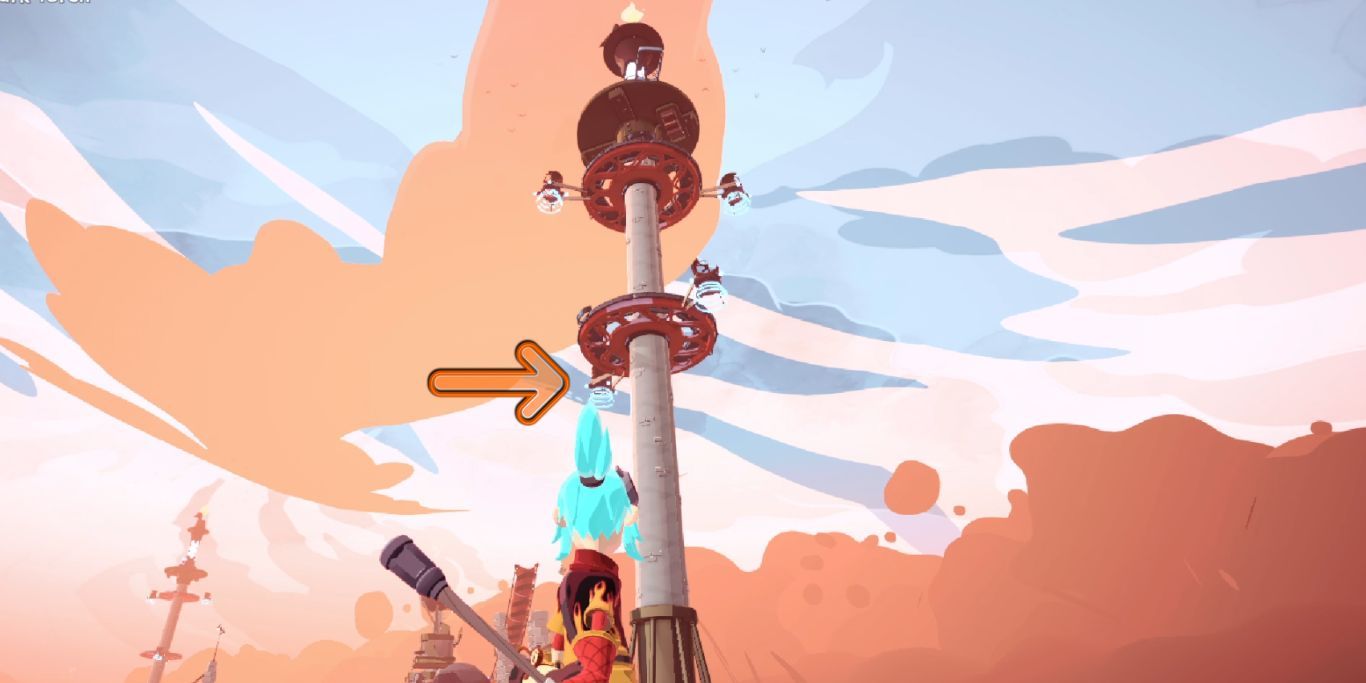 Charlie will ask you to sweep four spark torches in the area, and these are on top of huge towers that are hard to miss. All of these towers have rotating spring objects that you can pull yourself to. Get to the top of all four of these towers in order and activate the switches to clear a path through the fog.

After fighting a few stridors on your way, you'll have to activate three more switches on three different towers. Enter the island and defeat the enemies at the bottom, and you'll see a giant button in the middle. 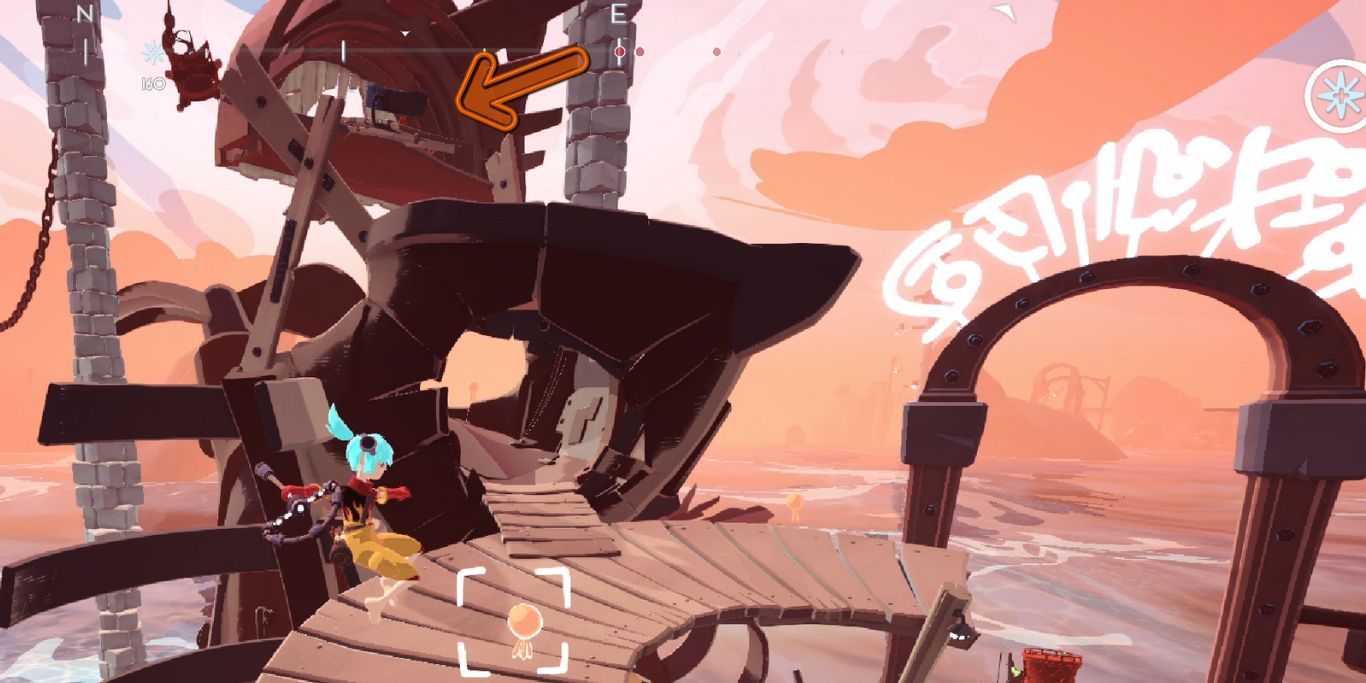 For the first switch, follow the wooden path on your right as you enter the new island from the side where grandma's ship is parked. There will be two holes on this side, and the one at the top will have a generator in it. Activate it and use the ring launcher and the launchpad to get to the top and flip the first switch. 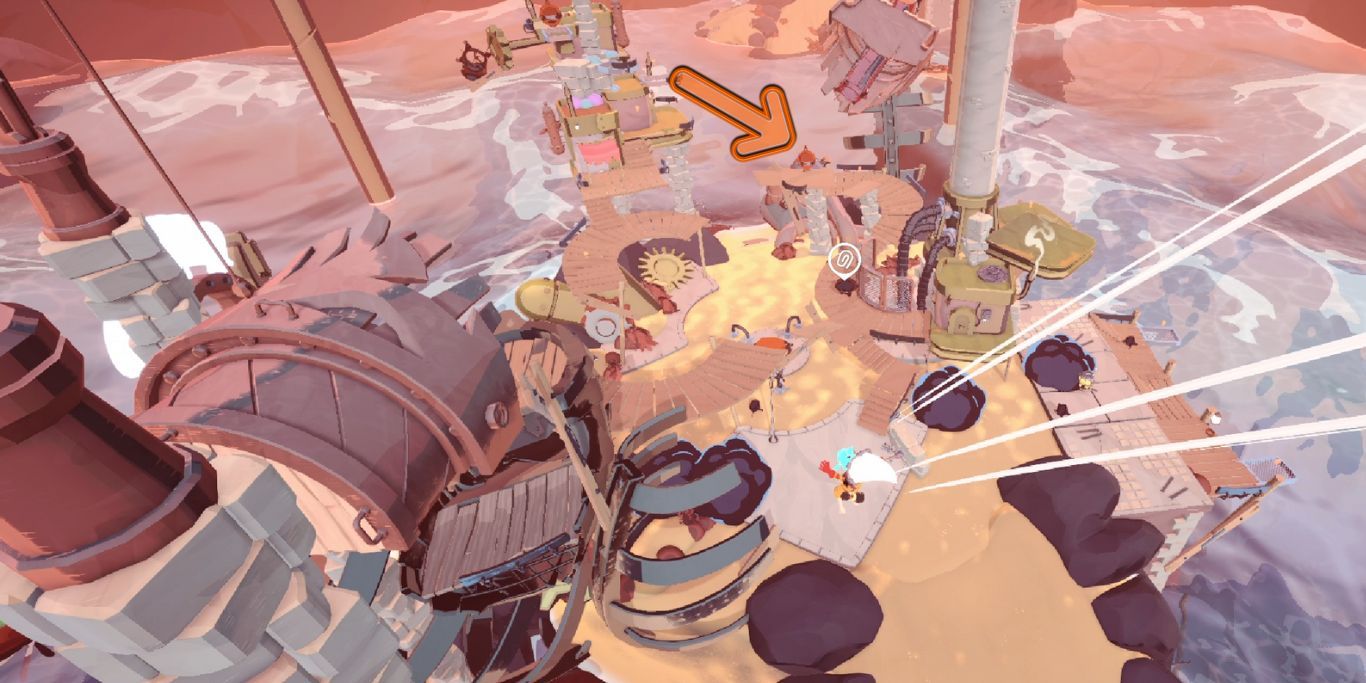 You can use the launcher right beside the switch to get back to the main island, and the second generator will be near a gloomed person at the bottom level. Hover over to this generator and activate it to get to the second tower. Follow the wooden path once again and activate the switch at the top. 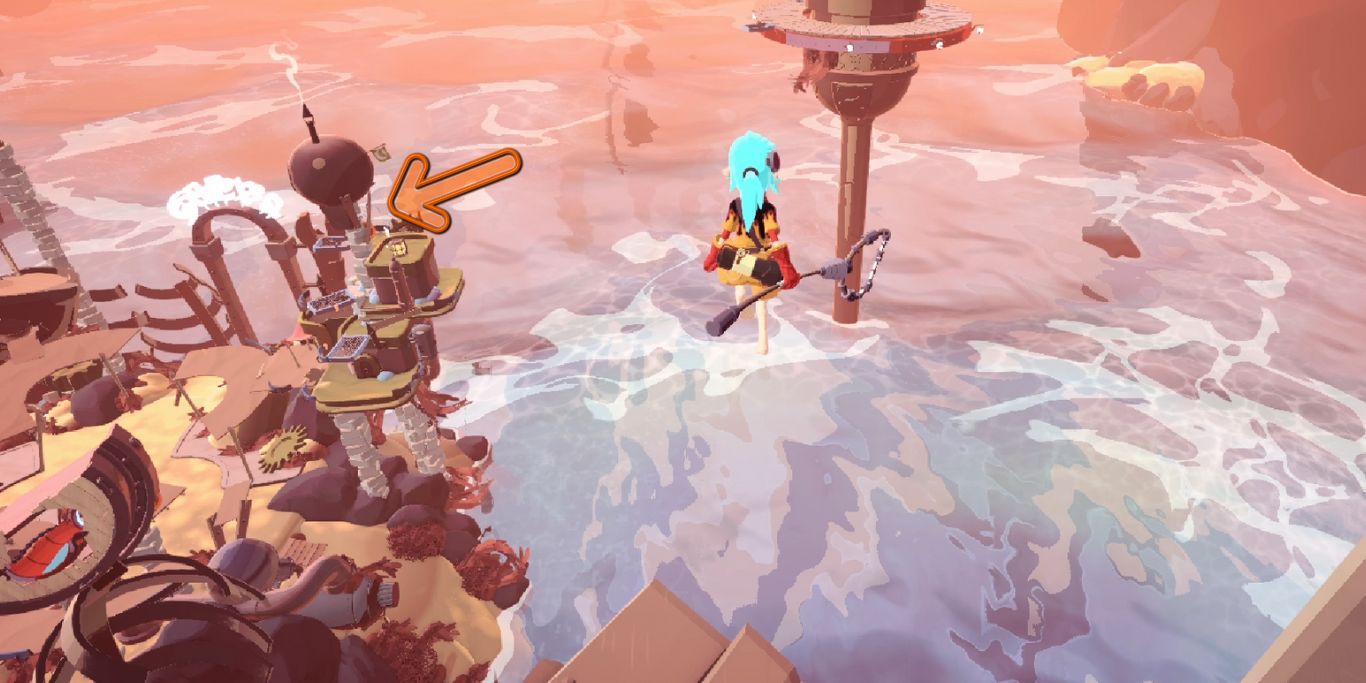 Hover over to the third generator shown in the picture above and get to the third tower after activating it. After flipping the third switch, you have to get back to the giant button in the middle and use your heavy attack while jumping on top of it to slam the ground.

Once the big button is pressed, you can climb the giant tower in front using the launchers and activate the final switch to reveal the pirates. You'll find out that Mr. Klout has already been talking to them.

How To Defeat The Serpent 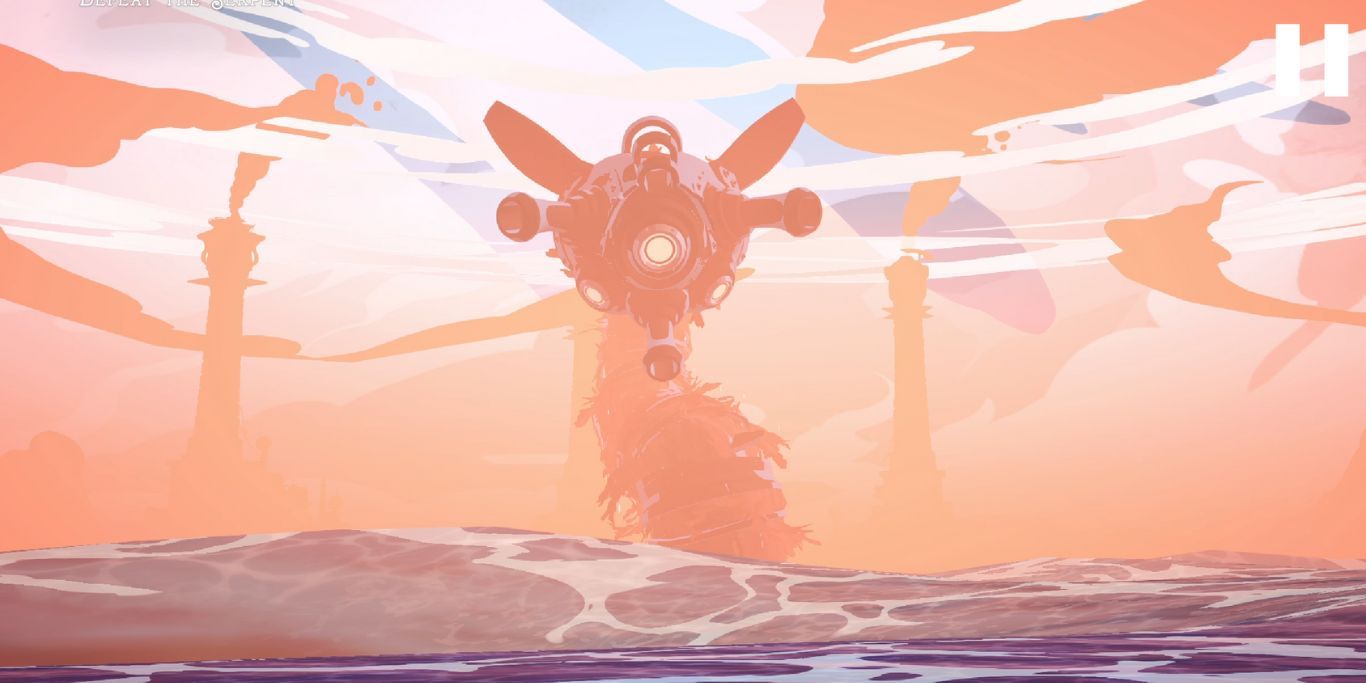 As you're listening to the conversation between the pirates, Klout, and grandma, the serpent will return and it's time to defeat it. Get rid of the striders on your way and get close to the serpent near a bunch of structures and chimneys.

Since it can start feeding at any of the three chimneys randomly, you can choose the correct one from below and find the path to the top. 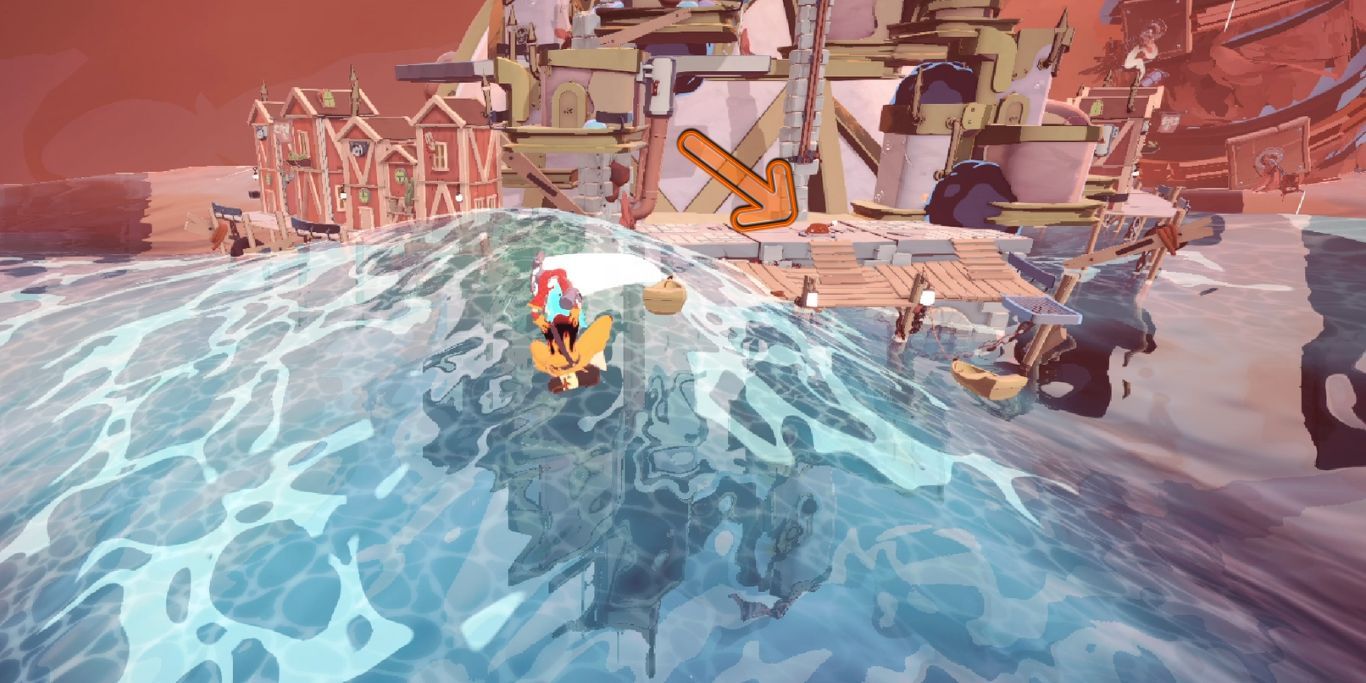 The structure on the far left will have a switch at the bottom as soon as you jump to it. Activate the switch to turn on the moving grapple beside it. After getting through two moving grapples, you'll find another switch that will turn on the third one.

Activate one more switch after that to use the final grapple and get to the giant button. Activate it to start the launcher with a gloom slide. This will let you jump on the body of the serpent using the platform on the right side. 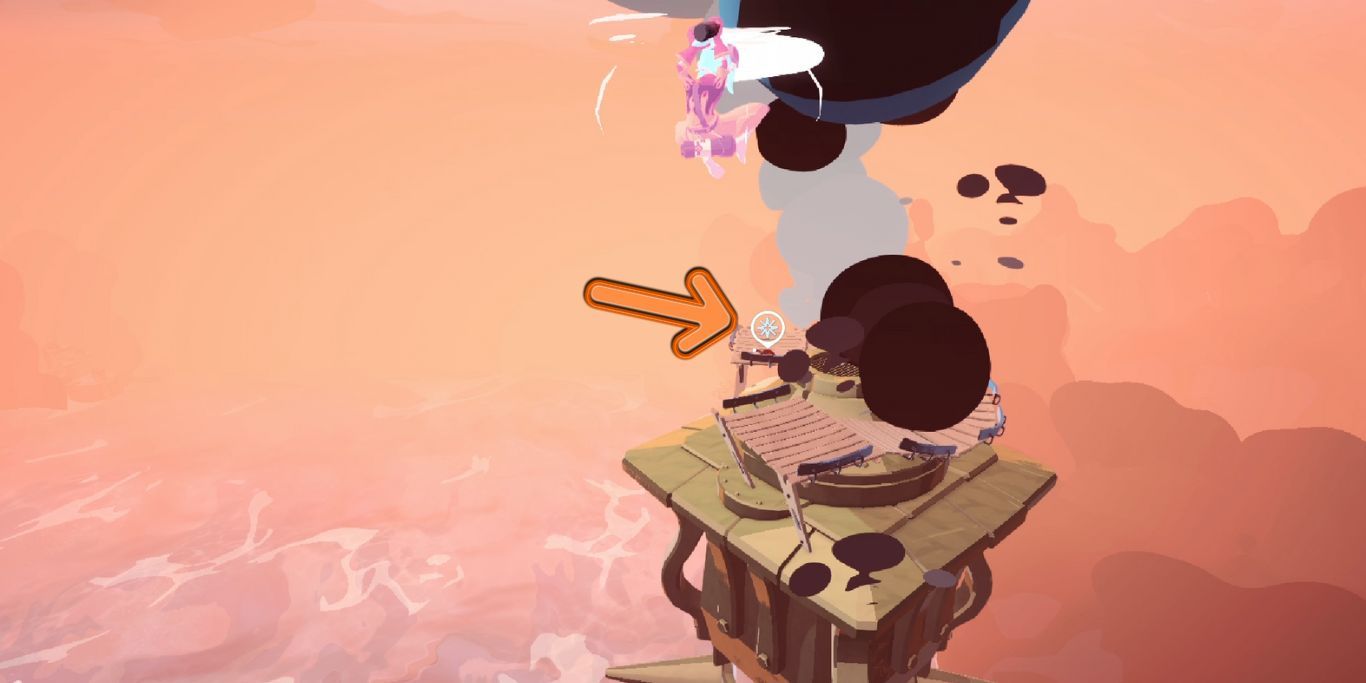 On the serpent's body, you have to use launchpads, electric launchers, and grapples to get high enough so you can hover over to the switch at the top of the tower. Activate it to burn the serpent.

You will have to fight more striders every time you burn the serpent using the chimneys. Upon defeating them, the serpent will go underwater and start feeding on the next chimney. 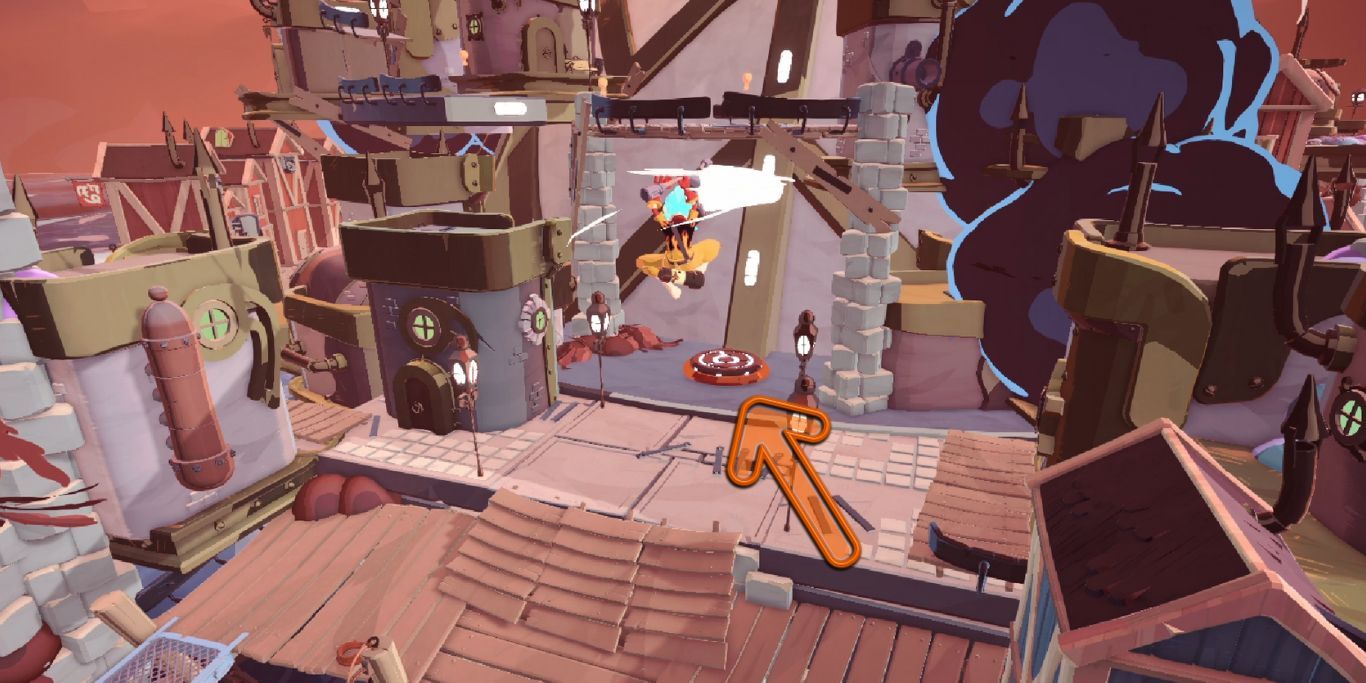 There will be a launchpad as soon as you land on the structure with the middle chimney. Jump on it and follow the path on the left side to find another launchpad. After that, there will be a switch in the middle that can be flipped to get to the giant button.

Follow the same procedure on the serpent's body as mentioned above and you'll burn it again. 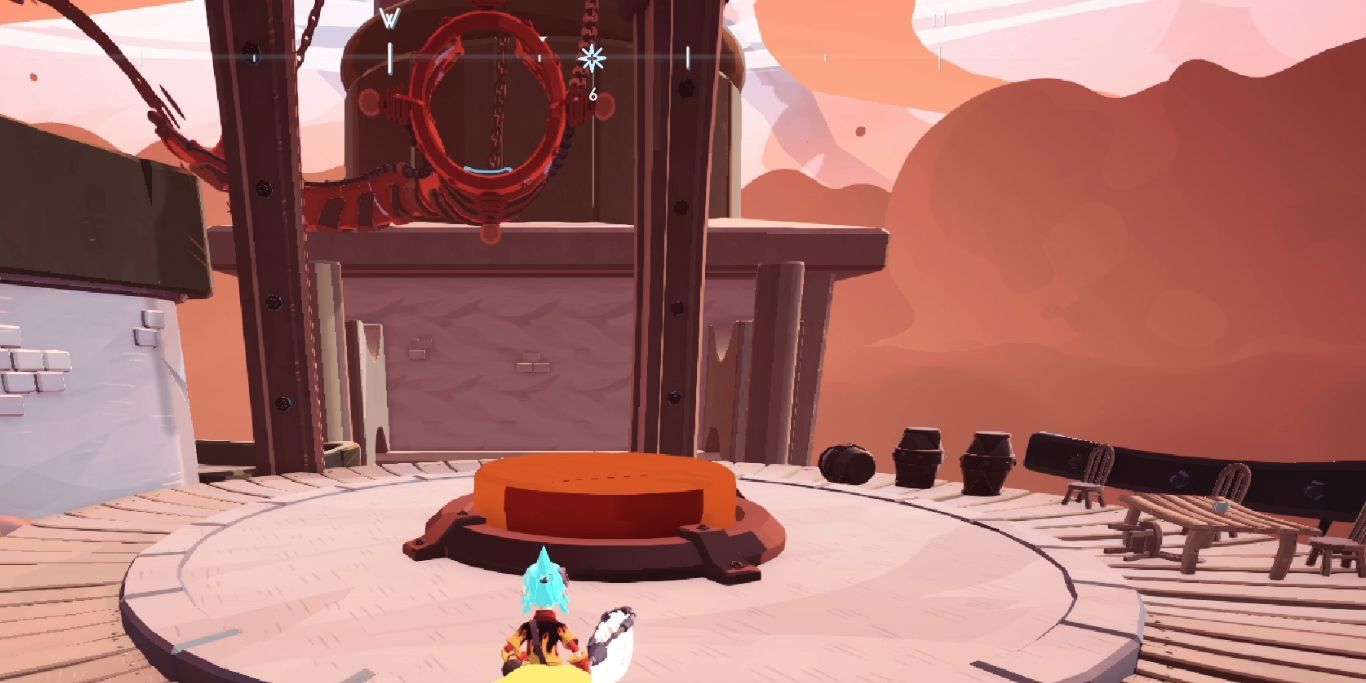 The chimney on the right side will have you use four launchpads in a row to get to the giant button. Once it's activated, you can get on the serpent's body once again using the gloom slide. Although, the process to get to the top might be a little different this time.

On the right side of its body, you will see multiple electric launchers that will shoot you upward constantly. Once you think you're high enough, simply hover over to the switch at the top. You can also use your dash once to cover some distance when you're flying midair.

After the serpent has been defeated, you can head over to the top of a structure and meet with Gunny. Here, Little Cassius will finally show up and he will commend Sigrid for her fight. She will also be the reason for the pirates agreeing to help you.