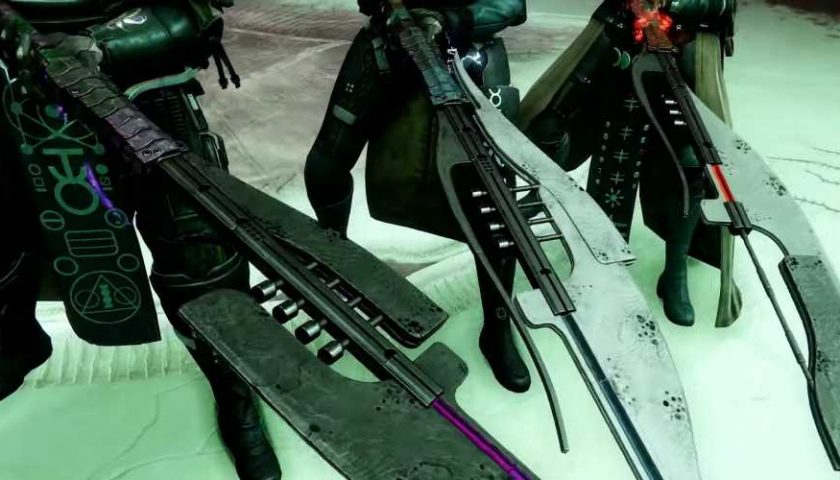 We're just one week away from The Witch Queen arriving in Destiny 2, which means just one week of reveals before the next big expansion. Today, Bungie has decided to make the new Exotic Glaives the focus of its latest trailer.

We've already seen the Exotic Glaives in previous trailers, but this is the first time we get to see each Glaive in action. We also get to hear from the Destiny 2 devs who worked on the Glaive, including producer Allison Kinzelman and designer George Kokoris.

"We throw stuff at the wall, see what sticks, and we found that Glaives are sticky," said Kinzelman, while Kokoris added, "It's a whole cocktail of absurdity."

It took a dedicated designer about a year to create the glaive, including six months of animation work and lots of iterations. And also playtesting, where Bungie invited lots of players to all stab each other with Glaives. Playtesting the Glaive was apparently a little rough at first, but Bungie managed to get the Glaive's power level to where they wanted it for release.

Besides the backstory, we get to see the Glaive's two attack types and three abilities. The Glaive's melee attack combo first stabs, then strikes with the butt of the polearm, and finally slashes with an overhead swing. The secondary fire ability is an energy shot that deals decent enough damage to fell a Hive Knight in a single blast.

Glaives also have great utility. The Titan Glaive creates a mini-bubble, while the Warlock Glaive makes a turret that fires healing bolts. The Hunter Glaive fires an Arc grenade that chains lightning to nearby enemies.

Guardians will be able to acquire their Glaives fairly early on in Witch Queen. The opening quest will direct players to the Enclave where they'll learn about the new weapon crafting system and craft their first weapon. The Glaive will be made here alongside custom Legendary weapons that Guardians can improve over time.