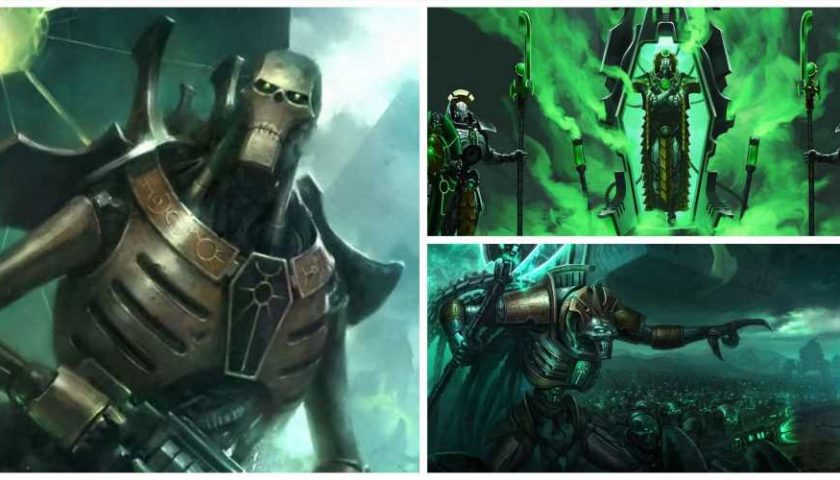 Soulless clanking machines that emerge from eons-old tombs to wage war on the lands of those living above, the Necrons of Warhammer: 40K are robotic creatures akin to the Cybermen of Doctor Who, but much more brutal. A seemingly unkillable foe whose legions are vast and come with an array of hyper-advanced technology, Necrons are almost unstoppable.

Yet more of these unfeeling machines lie dormant in vast subterranean Hives all over the universe and throughout the centuries they've regularly awoken to wreak havoc. There's quite a bit to cover about these glowing ancient death droids, but here's a slimline explanation of what you need to know about the Necrons in Warhammer 40K.

Who Are The Necrons? 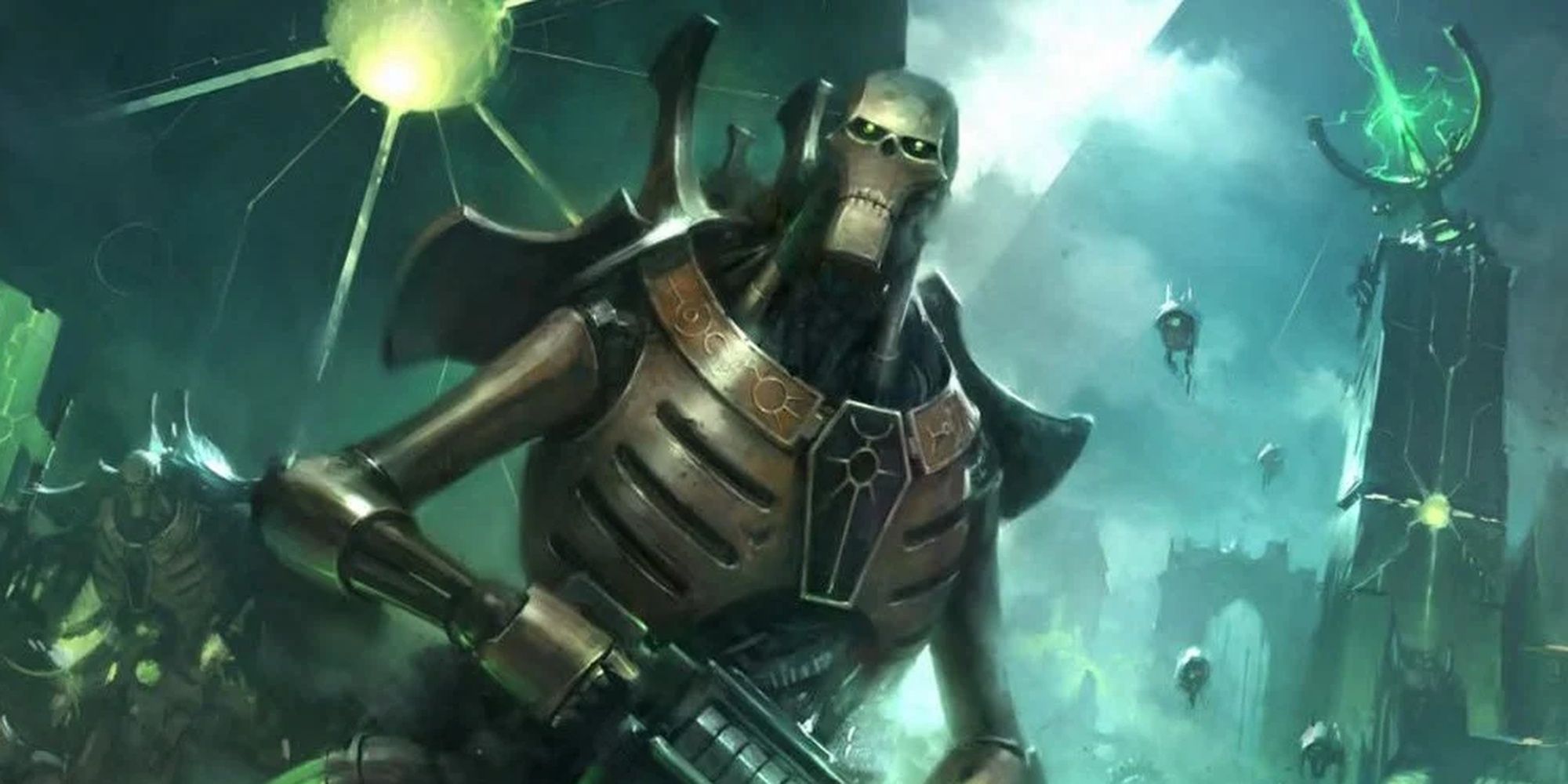 If you were to take a wide brush to it, the Necrons are a race of humanoid robots that are both ancient and vastly technologically superior to most species in the 40K universe. Capable of tearing through the strongest void shield and thickest armor plating with either their advanced weaponry or mechanically altered forms. Necrons can decimate entire worlds before they can react or even call for help. They truly are an indomitable force within the universe.

Though as a whole Necrons are a collection of ruling castes that all have their own motivations and level of strength and influence, they mostly have their own goals and motivations. Occasionally dark alliances will form. But every Necron always wants one thing, to take back what was once theirs. 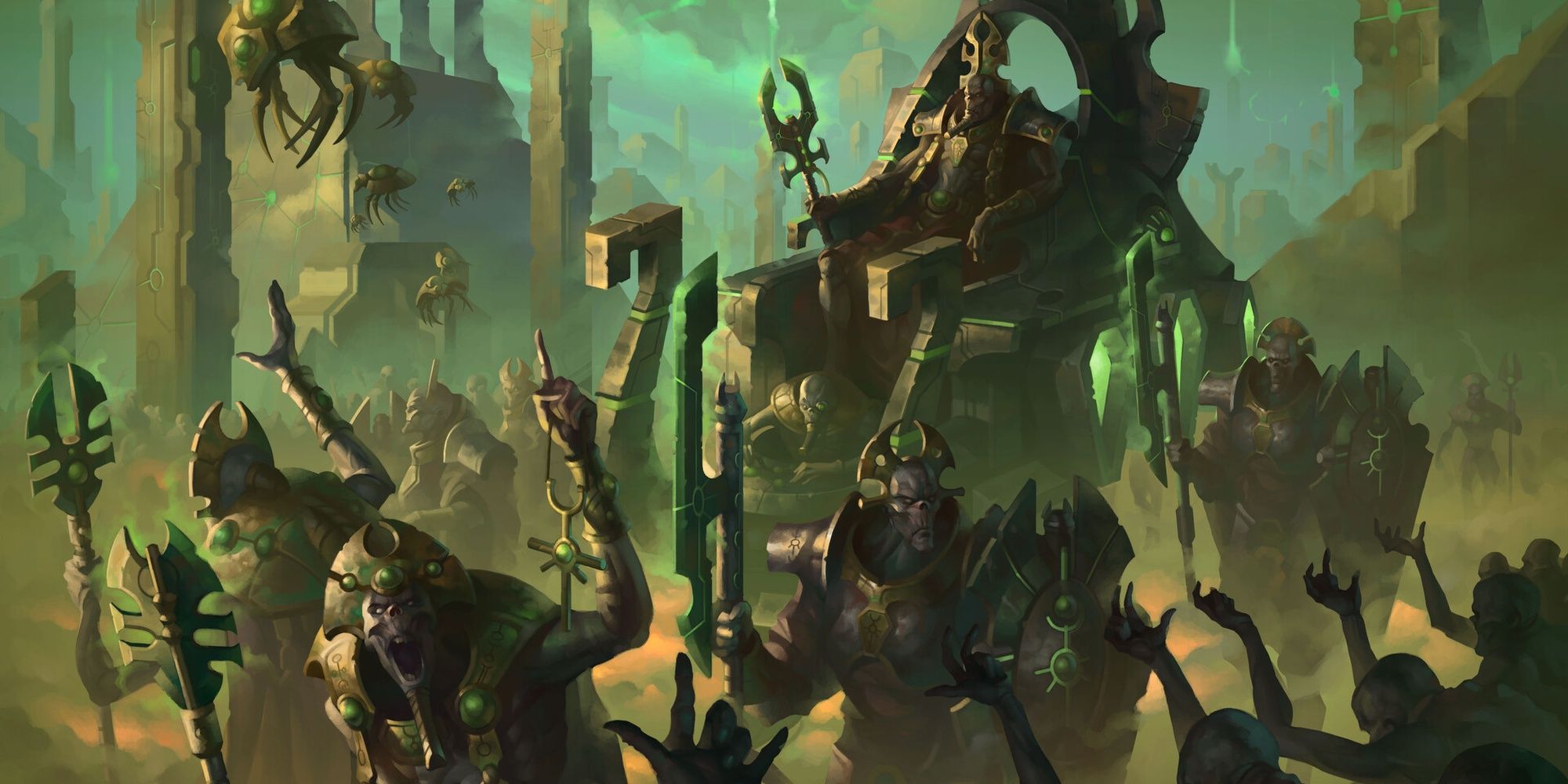 Millenia ago, before Humanity first took its first tentative steps out of their caves, the Necrons were already at the forefront of a vast galaxy-spanning dominion. But after a grinding and apocalyptic war with the Old Ones, an equally ancient and all-powerful race that first shaped the stardust of the Universe they were almost wiped out. But after a period of extended hibernation, they have begun to once again rise and reclaim lost kingdoms and territory.

The Necrons as a race first began their lives as an organic species known as the Necrontyr on a planet that was dominated by a sickly star that bathed the planet in lethal radiation. Life was harsh and short-lived in this world. Many met an early demise from complications brought on by the constant solar winds and radioactive storms. The society that formed within was one beset by constant death, large sepulchral monuments and vast crypts were dedicated to those lost. Over time it became a driving force that drove the race to advance themselves enough so that they could escape their toxic homeworld. 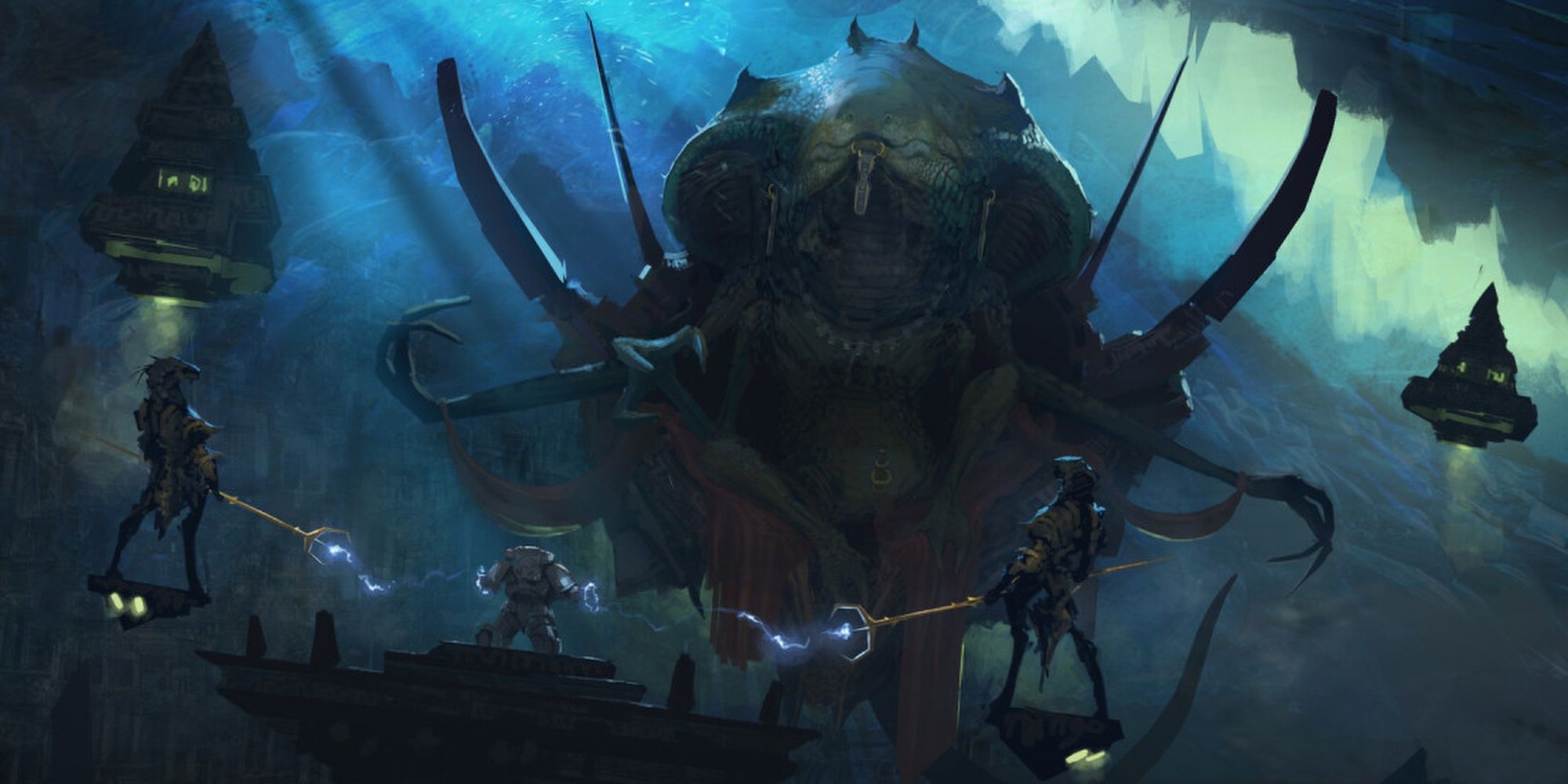 After traveling the stars for centuries, expanding their influence, and seeding colonies a great Necrontyr empire would form. But naturally, it fell to infighting and civil war to such a scale that it was decided the only way to placate all of the Necrontyr, was to find a common enemy to focus them on. This would eventually take the form of The Old Ones. A species with extremely long lifespans, hyper-advanced technology, and powerful psychic abilities.

Using the Old Ones' refusal to teach the Necrontyr the secrets of immortality as a flimsy excuse for war, the battles that followed make current conflicts pale in comparison. Despite their own advanced technology, the Necrontyr were beaten time and time again by the Old Ones who were much stronger. Entire fleets were wiped out, armies routed and eventually, the former early empire was pushed back into its box on the Necrontyr homeworld in a conflict that became known to historians as "The War In Heaven". And there the Necrontyr would stay for millennia, suffering under the radiation once again.

It’s safe to say that the Necrons of now would never have existed if it were not for the interference of the C’tan. For those unaware, these Star Gods are unfathomably ancient and roamed the universe of pre-history, before the planets and those that live upon them were nothing more than broiling gasses under the sway of newborn suns. Back then they were the first sentient and self-aware beings in the universe. Little more than parasites, feeding on stars in remote corners of the universe. They glutted themselves for centuries at a time until by sheer chance they encountered a Necrontyr stellar probe, and from there a first contact was made.

These Star Gods as they would be often referred to were believed by the Necrontyr to be manifestations of their own Pantheon of Gods of Death. Though it was untrue, it allowed the C'taan to manipulate their new devout followers with apparent willing subservience. This new alliance brought many new wonders as the power of the stars themselves was now supposedly theirs to wield. Immortality was finally promised and so the Necrontyr built vast conversion centers to elevate and unify their people into new undying bodies, or so the C'tan told them. 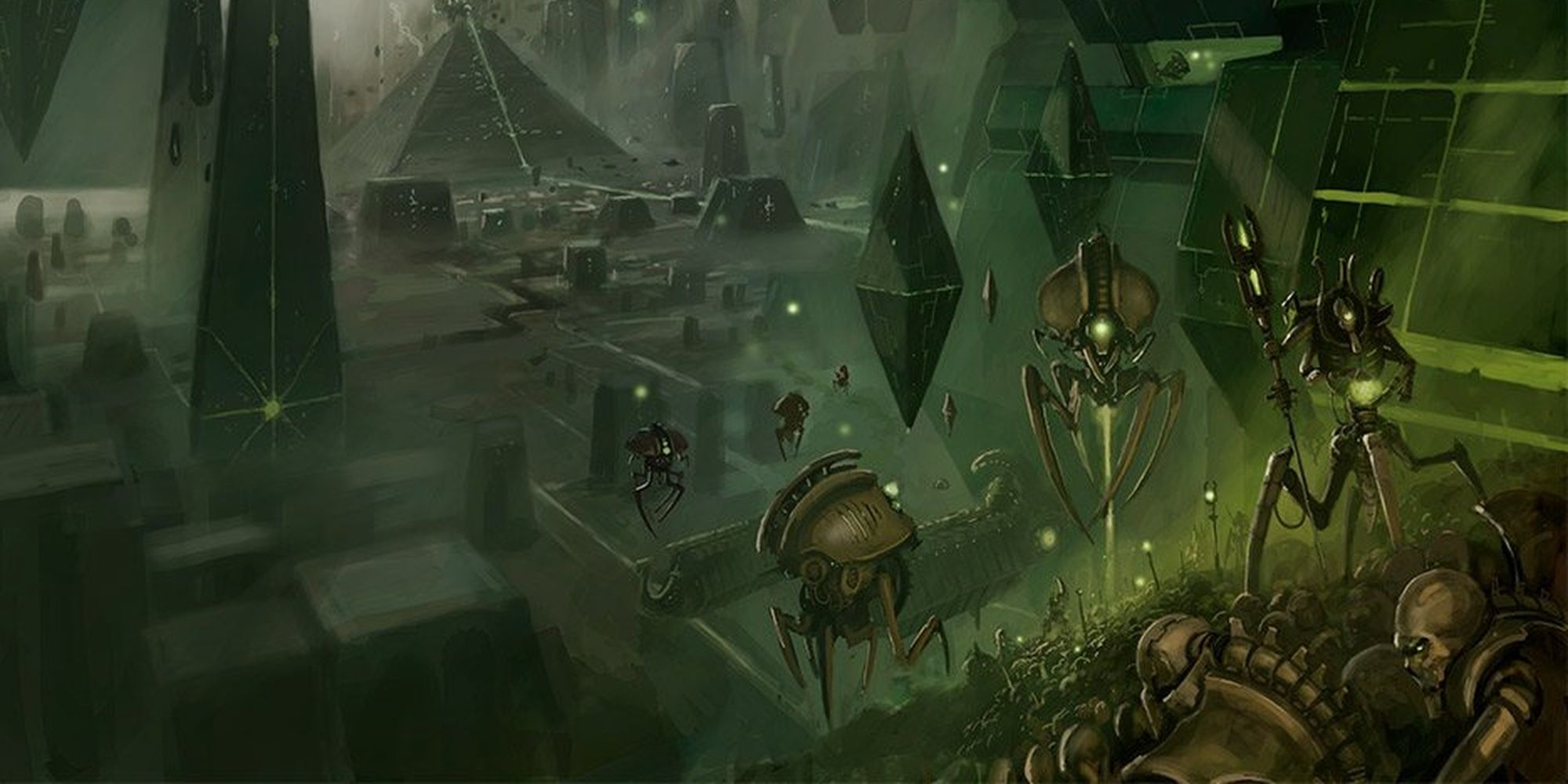 According to their new friends the C'tan, the grisly process of biotransference was the Necrontyr's only way to true immortality. A process by which billions would shed their mortal form for the cold, necrodermis endoskeleton, whether by choice or not.

Whilst the exact mechanics of the process are obscured to the annals of history, what we do know is that each Necrontyr that went inside one of the massive bio furnaces, emerged as a clanking, soulless, emotionless machine. Their sense of personality and individuality was stripped away as all but a select few were united in a remorseless hive mind. Finally, peace had been achieved in the Empire. 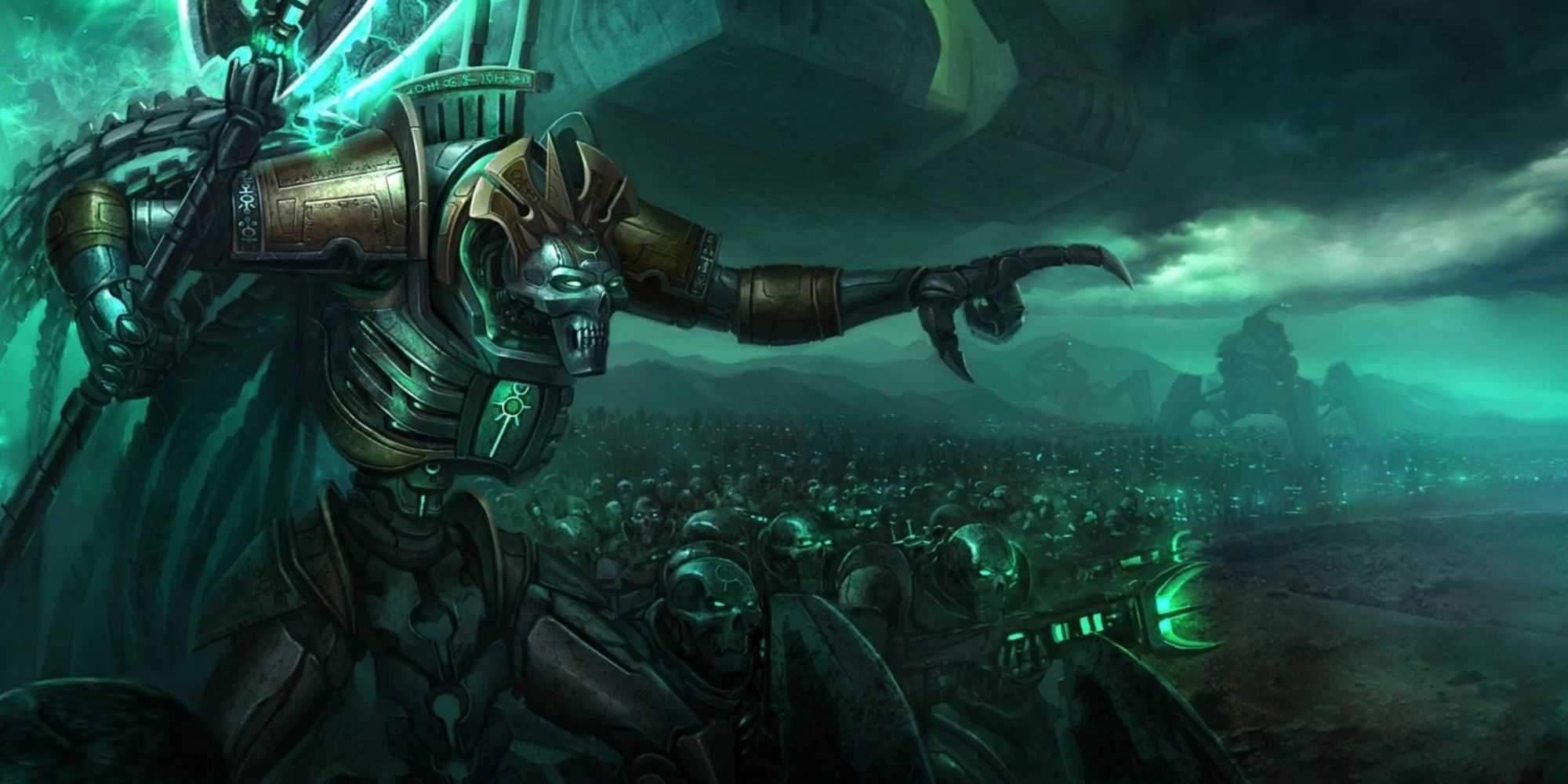 After gaining their new unbreakable forms, the Necrons, as they now referred to themselves, began a systematic eradication of the Old Ones. Revenge for wars past fought and grudges still to be settled. Their new patrons The C'tan provided them with planet-razing weaponry and nothing could seemingly stop them.

What followed was a war so intense that it caused vast fractures in the warp which allowed the tides of horrors and Daemons from the Immaterium to manifest and wreak havoc. Despite massive losses on either side and the C'tan almost fracturing due to infighting, eventually, the Old Ones were defeated. Despite their best efforts and the creation of numerous new species to counter this threat (such as the Krorks and an early ancestor of the Aeldari), the Old Ones were scattered to deep space and seemingly rendered extinct.

Betrayal and The Great Sleep 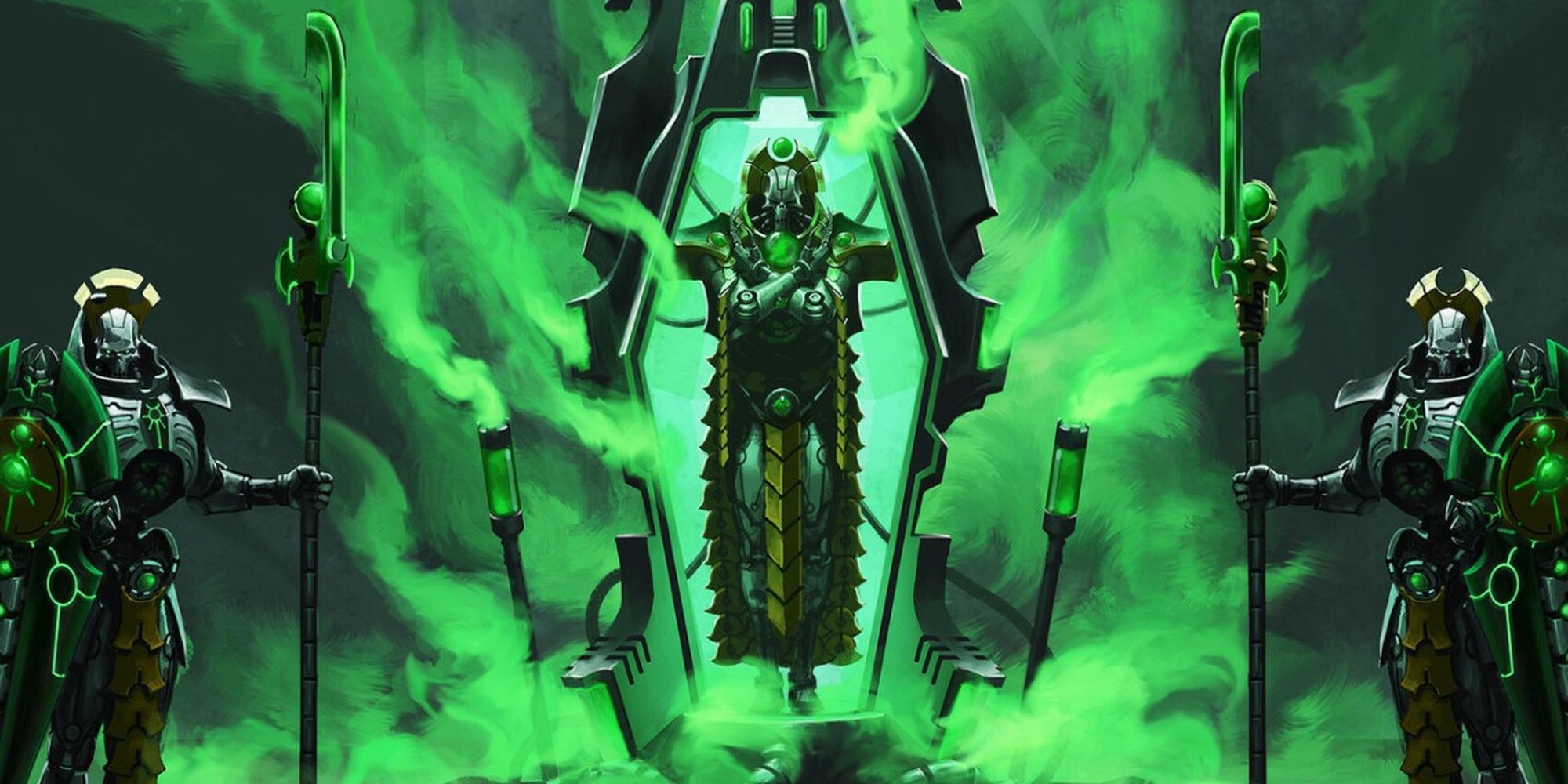 The peace following the war was short-lived as the Necrons suddenly turned on their C'Tan masters. For you see, there were those that realized the true purpose of Biotransference was to bind the Necrons to the C'Tans bidding whilst those vampiric creatures had fed on the collective souls of the species above the massive furnace stacks. They had taken their chance of an afterlife and damned them to being forever stuck as blasphemous machines. An act of great betrayal that they had never forgotten and would repay in kind.

Using weapons that focused energies so powerful not even the godlike Star Spawn could endure, the Necrons were able to shatter their former masters into thousands of shards. Turning them into living weapons without free will of their own ever again, proverbial genies in a bottle if you will. This conflict though was not without a high price, trillions were lost, ancient dynasties were destroyed and the galaxy was a wreck. Swarms of Enslavers and other Warp-spawned entities roamed across the ruins of countless worlds. The kingdom that was left was not worth ruling, the time of the Necrons was over, for now. So upon thousands of worlds, they built great tombs such as their ancestors did. But instead of honoring and remembering the dead, these were vast monolithic stasis chambers, locking away entire dynasties for protection against the passage of time. And there they lay, for 60 million Terran years until recently when they began to wake up en masse to stalk the Universe once more. 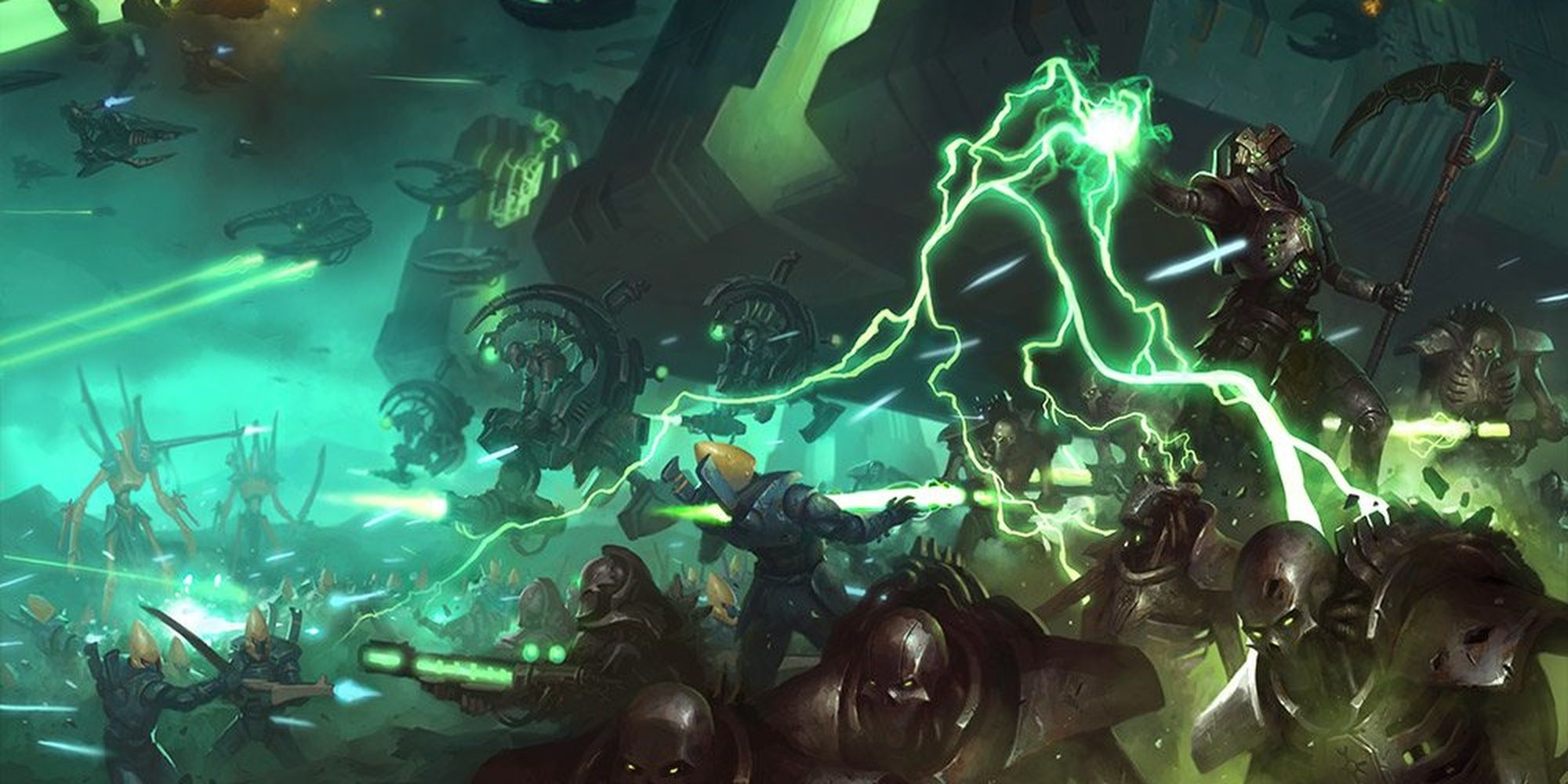 The general consensus on Necron technology is that if you were to compare it with that of the Imperium of Man it would be like measuring a Nuclear Missile against a Pencil. Especially if a C'tan Shard is involved. Their warriors come in an assortment of combat forms, their weaponry just as diverse as it is deadly and it's commonplace for just one or two of their ships to be able to destroy an entire fleet.

On top of all that, one of their strongest assets is their Necrodermis skin. Composed of an element of unknown origin and chemical composition, it's supremely dense and capable of self-repair. So it's commonplace to see a downed Necron soldier piecing itself back together before continuing the slaughter. To put them down for good requires completely overwhelming their ability to regenerate and even then they could just teleport back to their Tomb to be repaired and sent back out. You can never truly be sure if you've stopped the Necrons, only time will tell. 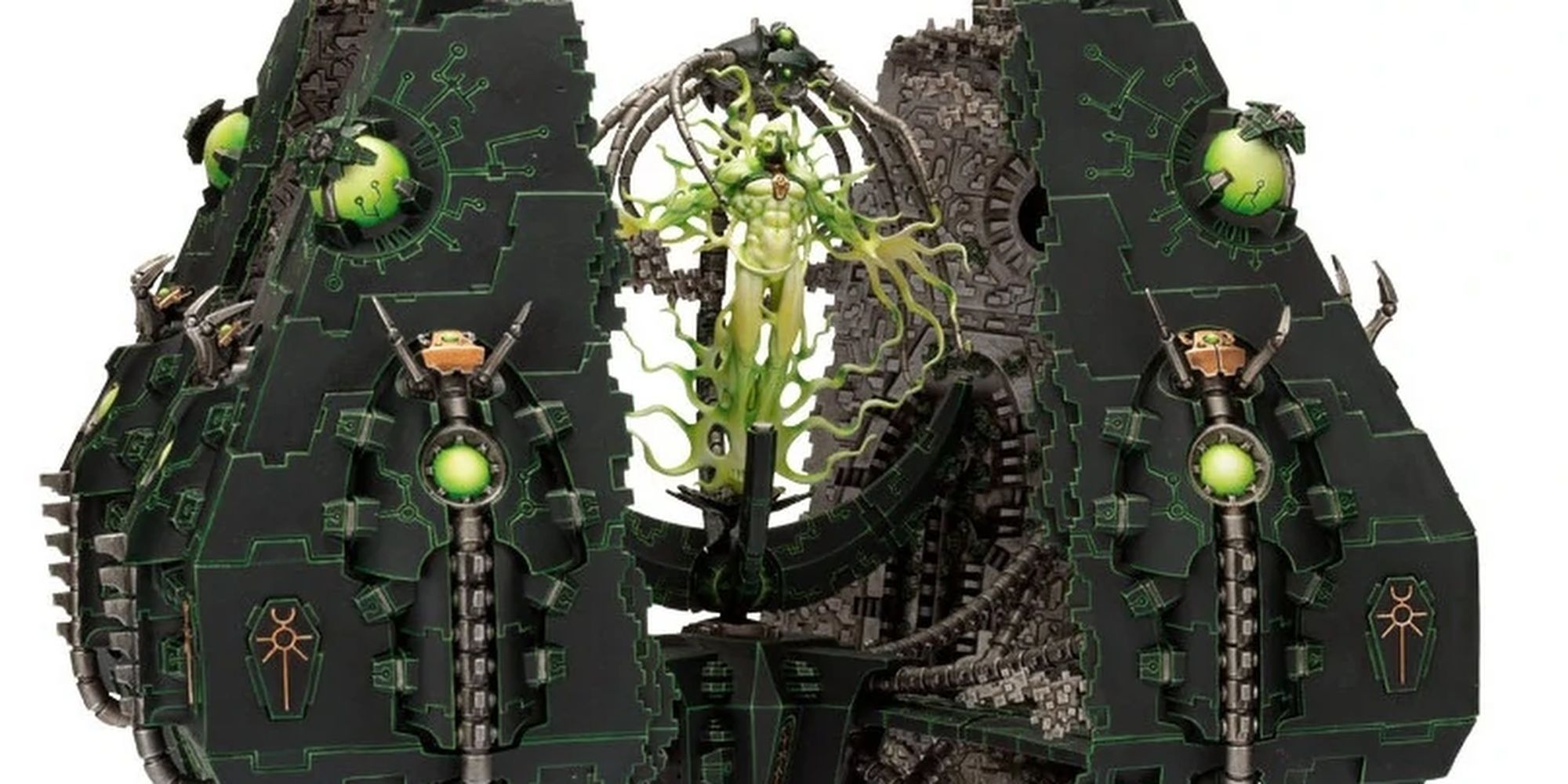 After being blasted apart by Necron weapons, the C'tan shattered into thousands of pieces. These shards were then stored within special devices known as Tesseract Labyrinthes. Objects which acted as both a prison and focal lens for the powers of these godlike beings.

With their former false deities now enslaved, the Necrons now had access to a weapon that could devolve entire armies into ooze, melt tanks, turn Space Marines into ash, cast baleful energy bolts, and even tear entire planets apart with just a gesture. The only limitation to the destruction being the imagination of the Shard. Destroying these weapons involves breaching their nigh-impenetrable and self-repairing Necrodermis skins, but once that happens they're destroyed permanently in a titanic explosion. 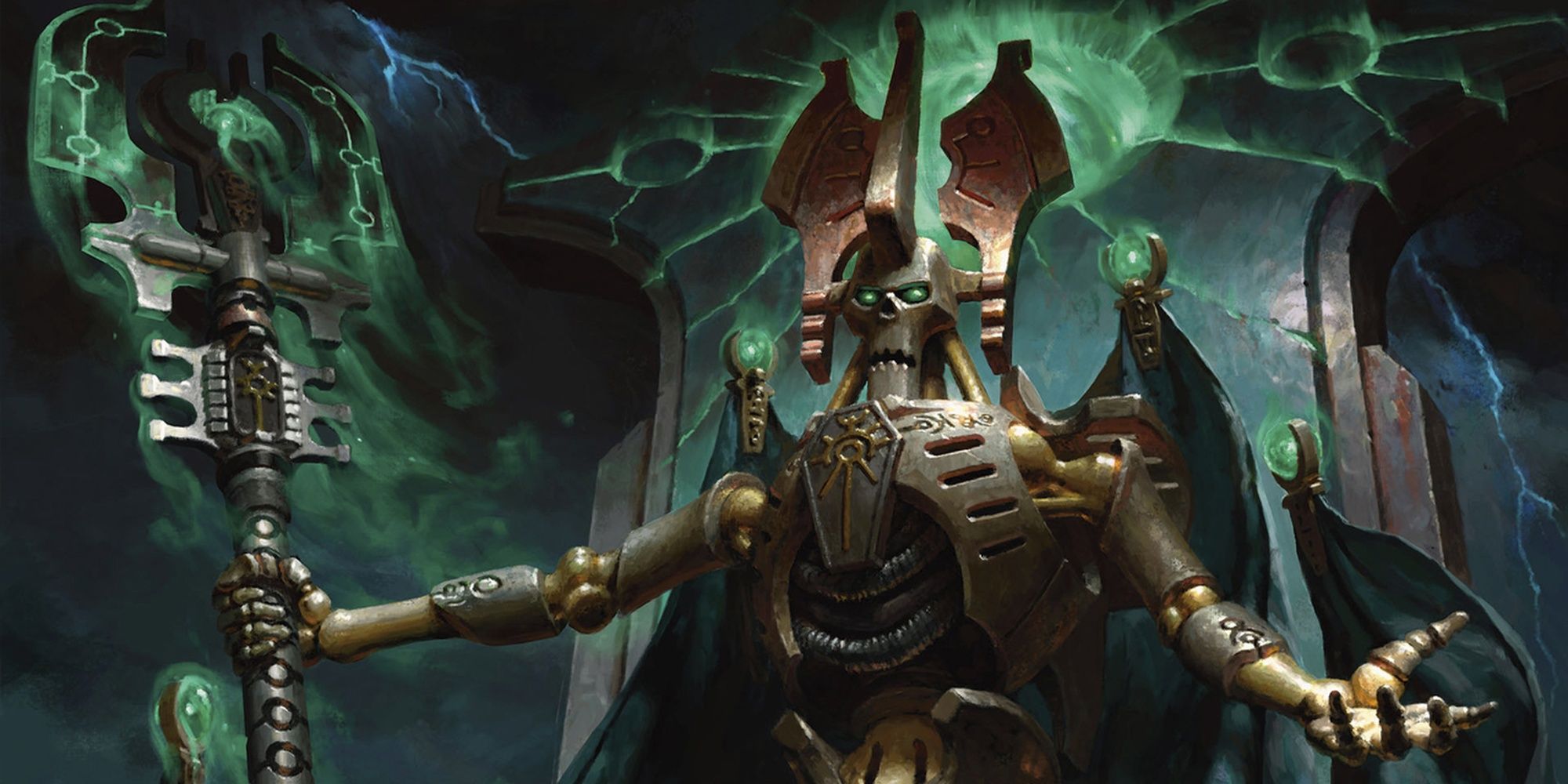 Rather than following one universal ruler, the Necrons instead have a strict hierarchal structure that organizes the vast dark under empire into a functional fighting force. Similar to their old system of ruling Nobles, they're broken down into dynasties that tie their origins back to old Necrontyr households.

Here’s a brief rundown of what it looks like:

From there it breaks off into minor ranks and various royal courts, but for the broad strokes, this is generally how most Necrons operate. Although there are some outliers like The Severed which are controlled by a Tomb World master control program that took charge on its own. Or the Flayed Ones who are an anarchic force unto themselves. 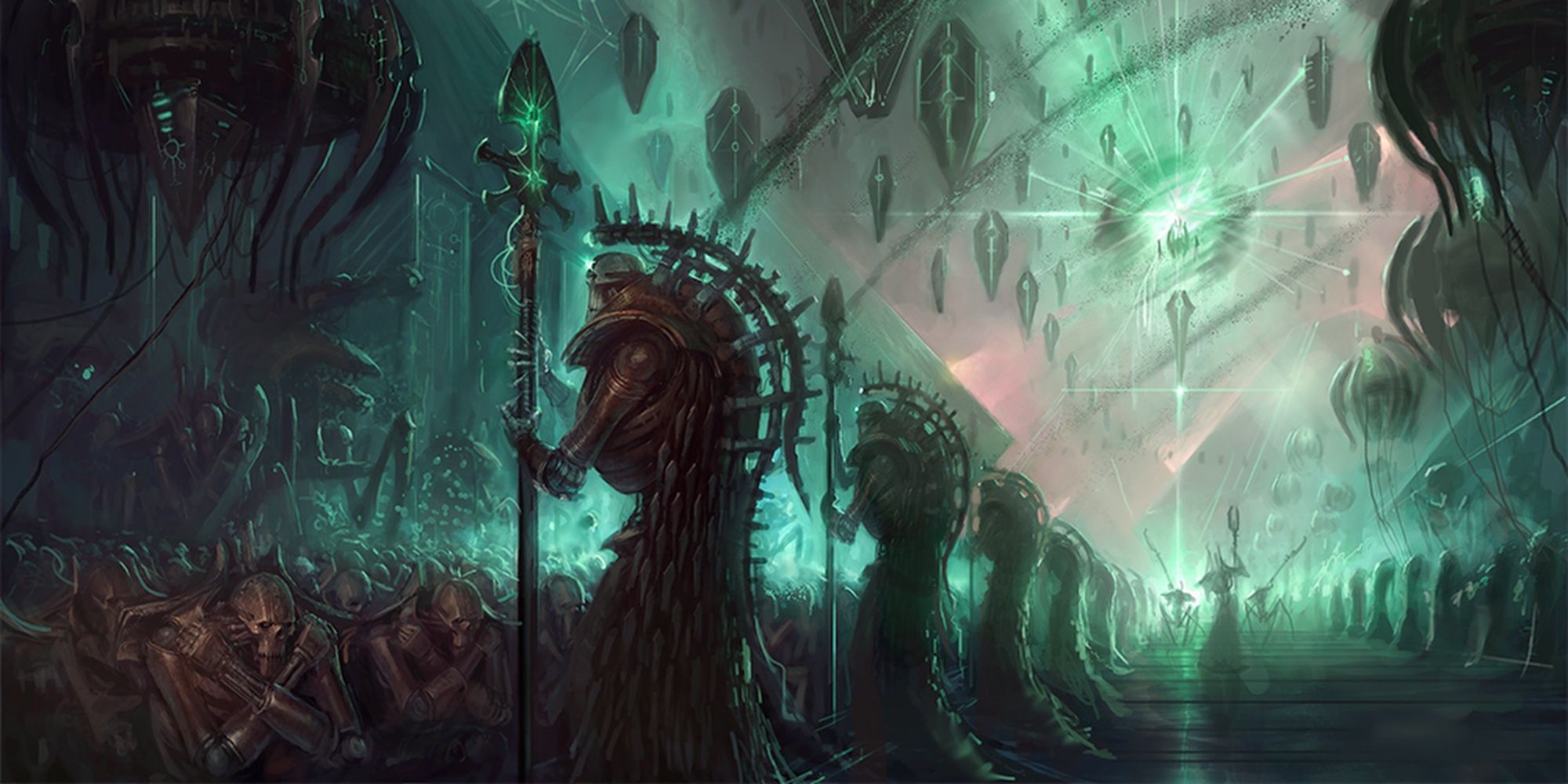 Because they were sealed and buried a millennia ago, these tombs went mostly undiscovered by the rest of the universe as a whole. Though many would fall and be lost for one reason or another, such as internal failure or external threats like tomb raiders or nearby wars. It was but a small fraction of the near-numberless hordes of this slumbering species.

So numerous are these crypts that they can appear pretty much anywhere. From verdant backwater planets to bristling forge worlds or even barren lifeless husks. All have a chance of containing a long-lost Necron tomb, and should the awakening protocols be engaged it won't be long until the clanking metallic hordes arrive. The process of waking up a dormant Tomb is not rapid. It can take anywhere from days to months and even centuries for a dynasty to fully awaken and become active. The awakening is controlled by a special Master Control program that monitors its hibernating occupants and if particular circumstances are met on a world, it will start rousing its inhabitants in stages. First small Canoptek Spyders and Scarabs are released to repair and maintain the Tombs whilst also eliminating intruders. The next activation stage involves deployments of Necron Warriors as raider forces to determine local resistance and gain other data. From there higher strength soldiers and equipment is roused from stasis before this newly risen army and Tomb is placed under the control of its slumbering Necron Lord. Then the world is taken.