Warframe has a wide range of characters, weapons and vehicles for you to play with, and whether you prefer to fight in close combat, sniping enemies from afar, or supporting your team, you will always find a way to have fun and adapt your arsenal to your needs and preferences. If you prioritize survivability and toughness, one of the many warframes you can choose from is the bulky Rhino.

Initially introduced as one of the nine initial warframes back in 2012, Rhino is a tanky warrior that can prevail in almost any circumstance by empowering his own shields, with access to crowd control resources and also being able to buff his teammates in combat. With enough practice and the proper build, your armor can get buffed until you become practically impervious to damage, making Rhino one of the best tools for your arsenal in combat-focused missions.

How To Craft Rhino 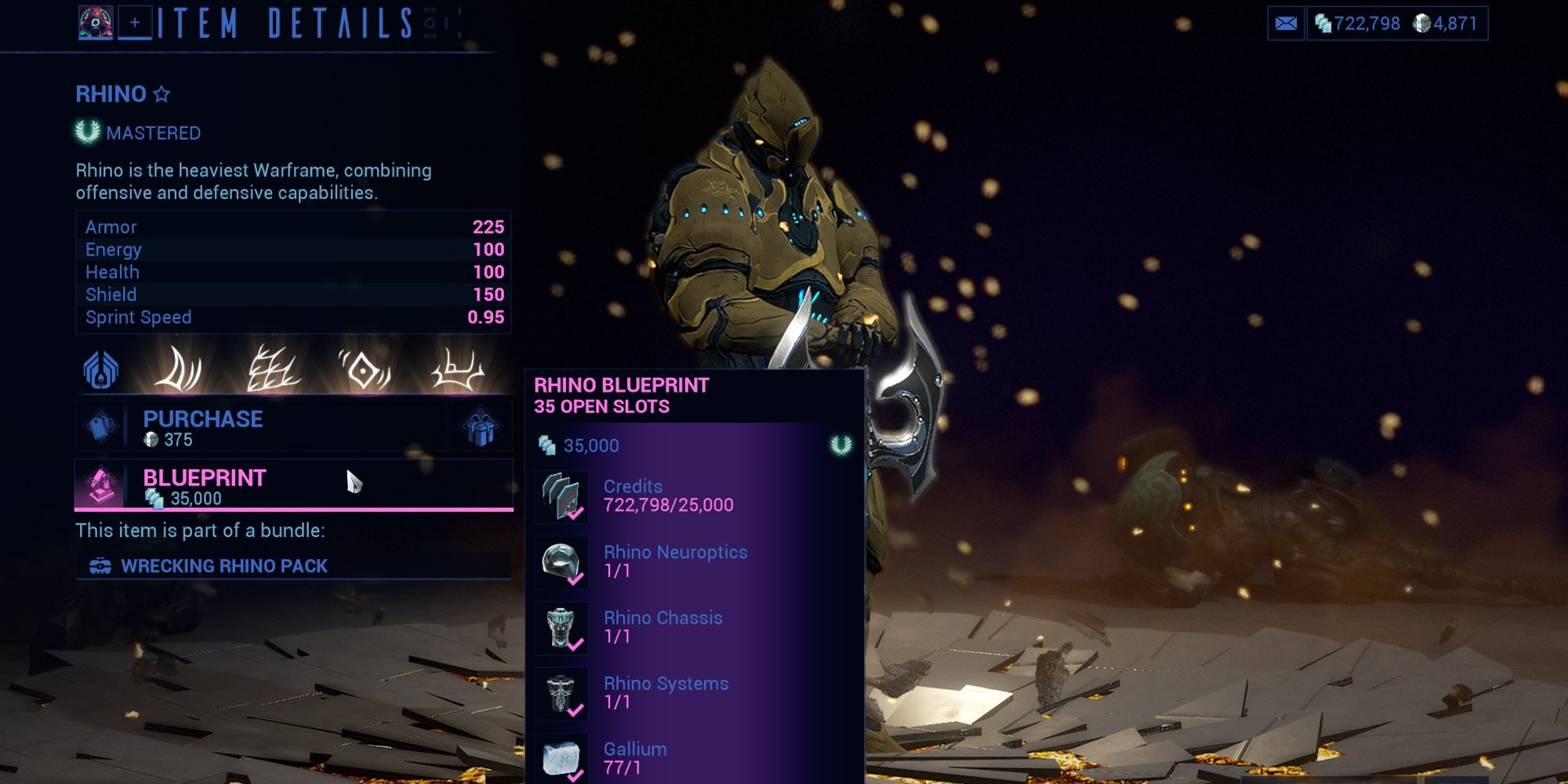 To craft Rhino you must obtain his Main Blueprint first, which you can purchase in the Market for Credits. Once you obtain that you will have to go to the Fossa node in Venus, and fight the boss enemy Jackal for the remaining three blueprints. The materials involved in the creation of Rhino's components (such as Ferrite, Salvage, and Rubedo) are pretty common and easily farmable across the Origin System. 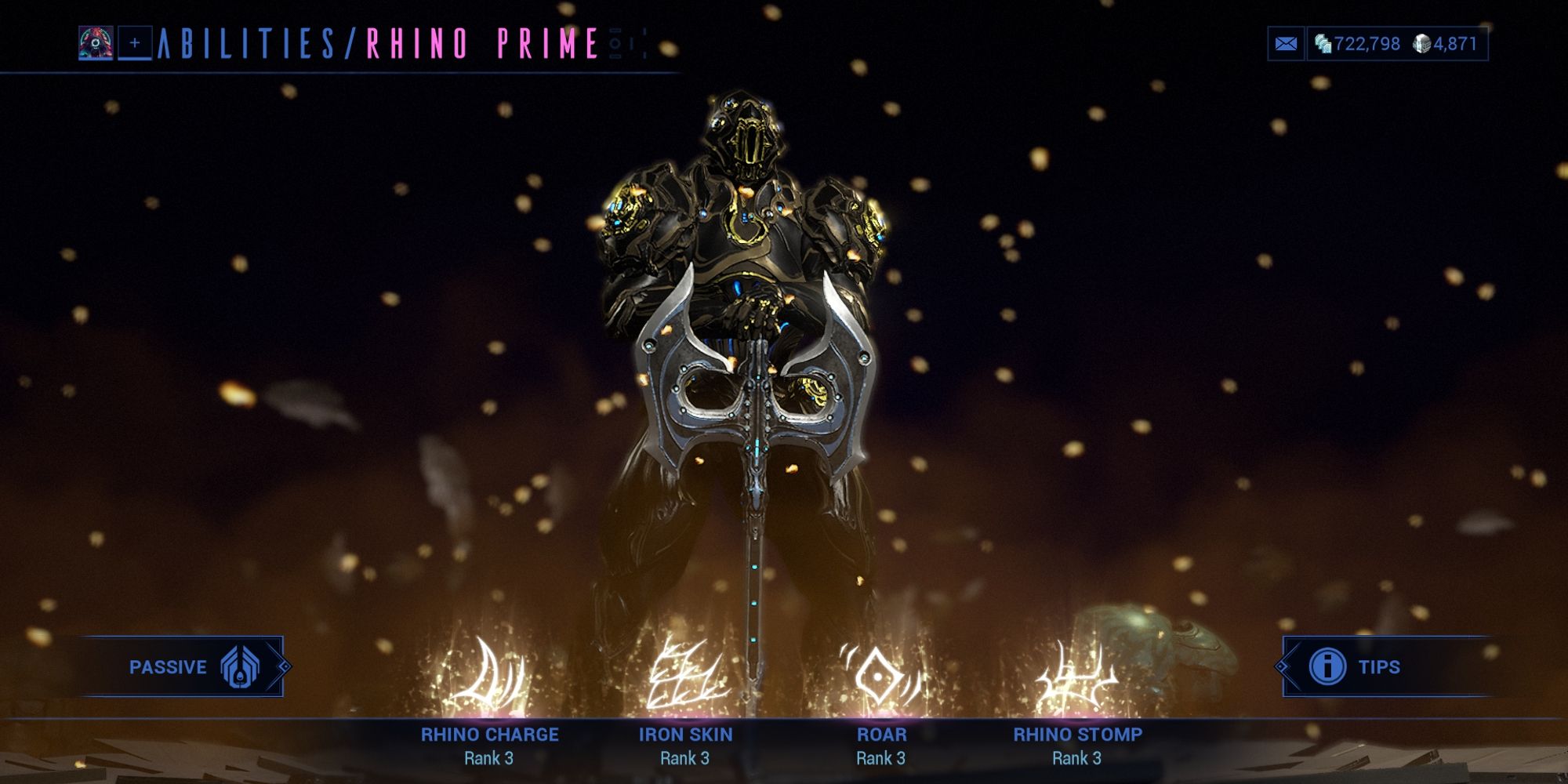 If Rhino falls far enough to incur a Hard Landing, the ground impact will discharge a shockwave that deals damage in a six-meter area of effect and knocks down nearby enemies.

Rhino’s passive ability is immensely helpful when you’re getting overwhelmed by large groups of enemies. Being able to stun a multitude of foes gives you a break from the usual conflux of bullets aimed at you, while also leaving them open and vulnerable for you to attack. Even if the fourth ability is a more powerful version of this tool, having access to this Passive ability is great if you want to focus your build on something else. 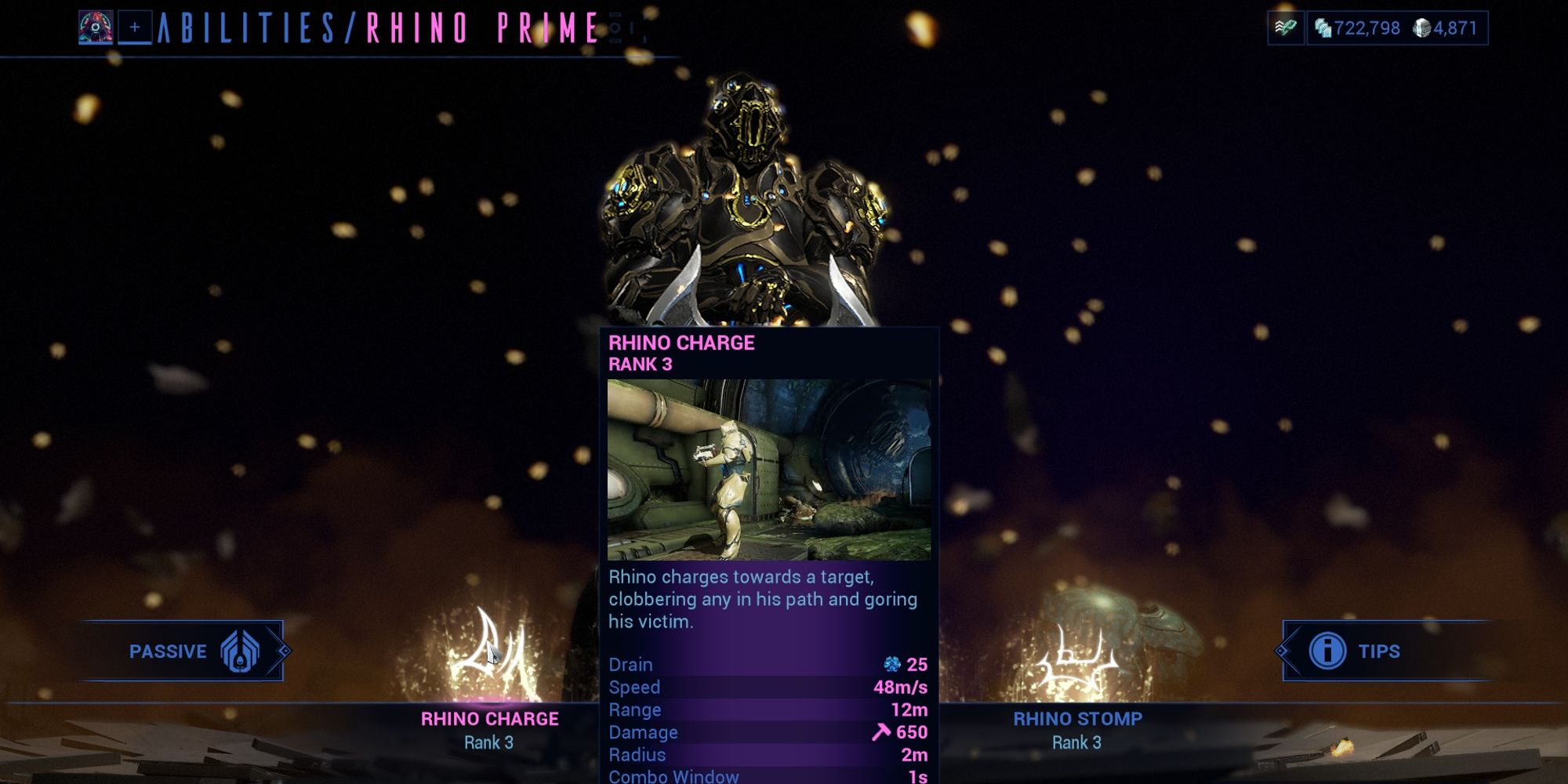 Rhino Charge: Rhino charges towards a target, clobbering any in his path and goring his victim.

This Ability is a perfect crowd control tool, helping you to either take down multitudes, or even lone enemies. Since any enemy hit will ragdoll out of your way you can take advantage of this to eliminate them as they lay vulnerable on the floor. A good recommendation would be to add the Mod Ironclad Charge, which adds an extra 50% to Rhino’s Armor value for every enemy hit with this ability. 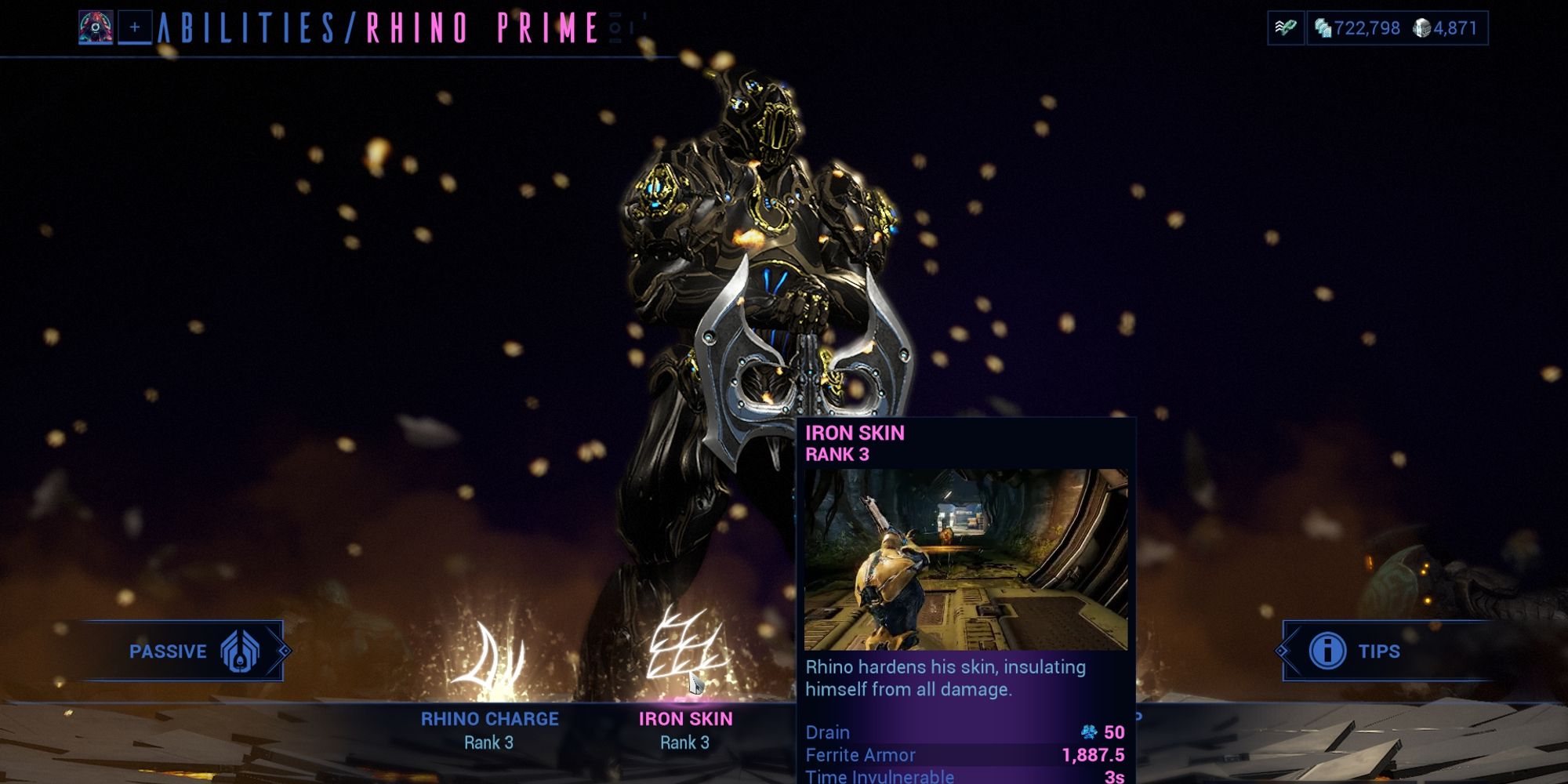 Iron Skin: Rhino hardens his skin, insulating himself from all damage.

Iron Skin is, by far, the most used of Rhino's skills, and not without reason. After triggering this ability you become invulnerable for several seconds while coating yourself in a metallic skin, displaying its own health pool and adding an armor multiplier to it. With the proper build, you can take advantage of this ability to become a bullet sponge, which in turn allows you to freely cruise through missions with zero regard for your own safety since you’re now pretty much invulnerable.

A welcome addition to this already useful technique would be the Augmenting Mod Iron Shrapnel, which lets you recast the Iron Skin, enabling you to cause damage and refresh the armor pool if needed. 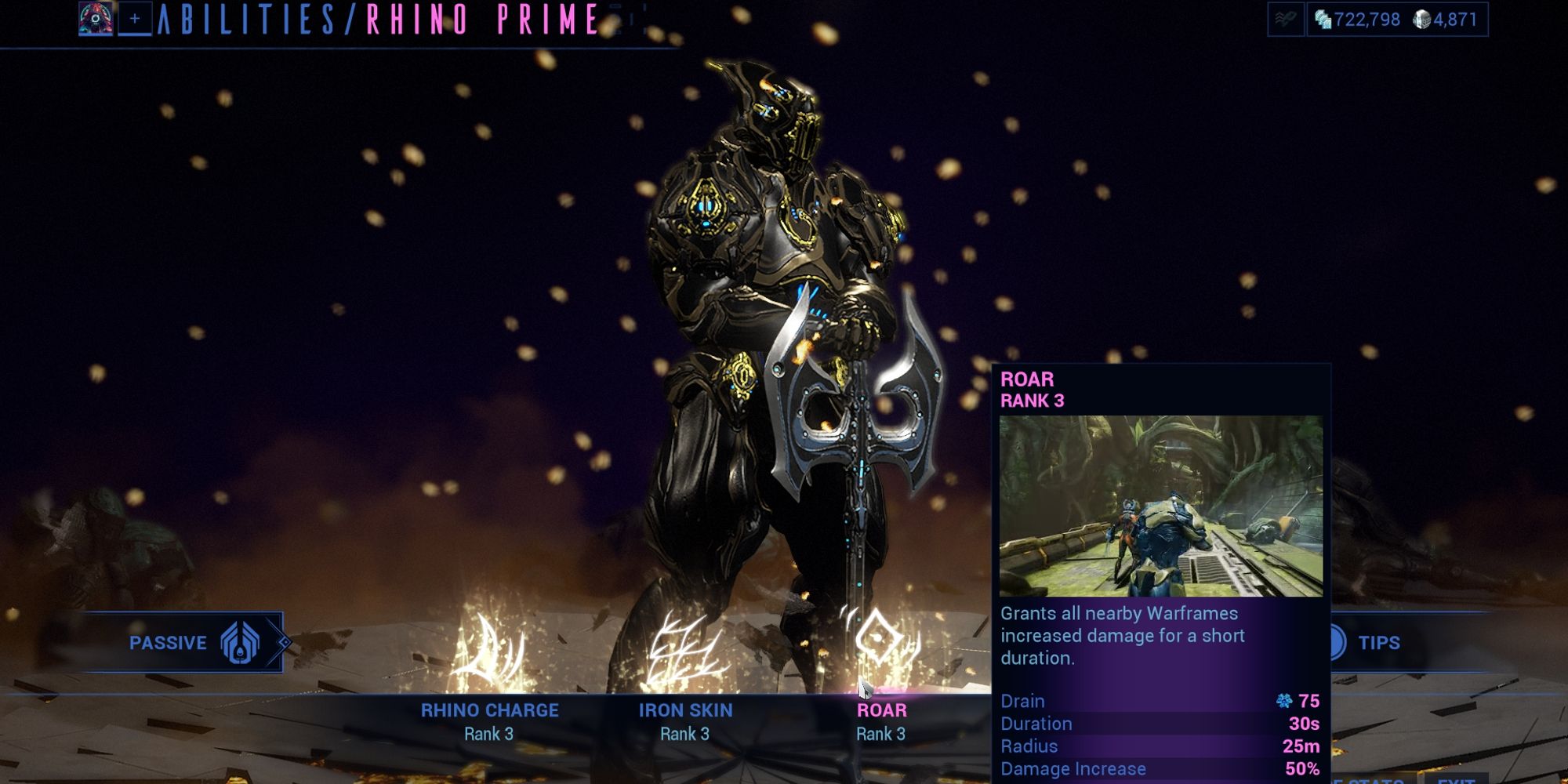 Roar: Grants all nearby Warframes increased damage for a short duration.

Roar is a support skill that helps your teammates buff their overall damage for half a minute. Since Rhino isn’t exactly a support-focused warframe, chances are that you won’t see this skill very often, but it’s a nice buff to keep in mind regardless. If you still want to give some extra juice to this ability, Piercing Roar is an Augment Mod that allows Roar to knock down enemies, inflicts Puncture Damage, and allows you to recast it. 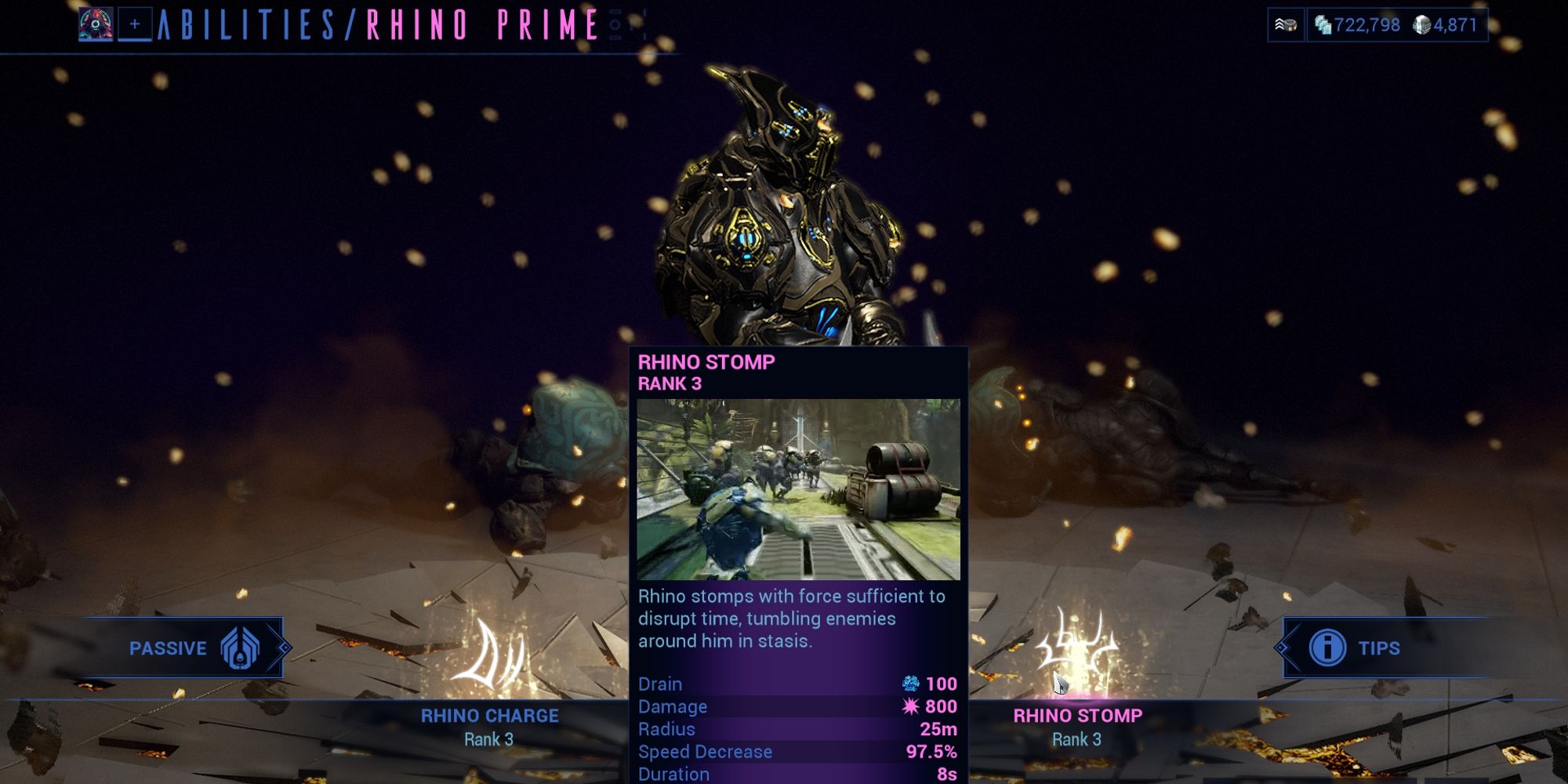 Rhino Stomp: Rhino stomps with force sufficient to disrupt time, tumbling enemies around him in stasis.

The final ability in Rhino's arsenal will be Rhino Stomp, an AoE attack that inflicts Blast Damage for several seconds while also massively slowing down enemies, leaving them immensely vulnerable for you to annihilate them. It works similar to Rhino's Passive Ability but on a bigger scale, is less circumstantial, and has a better damage output.

The Prime version of Rhino possesses higher Armor and Sprint Speed, and an additional Naramon Polarity. This Prime warframe was released on March 5th of 2014, with the Boltor Prime and Ankyros Prime as his flagship weapons. 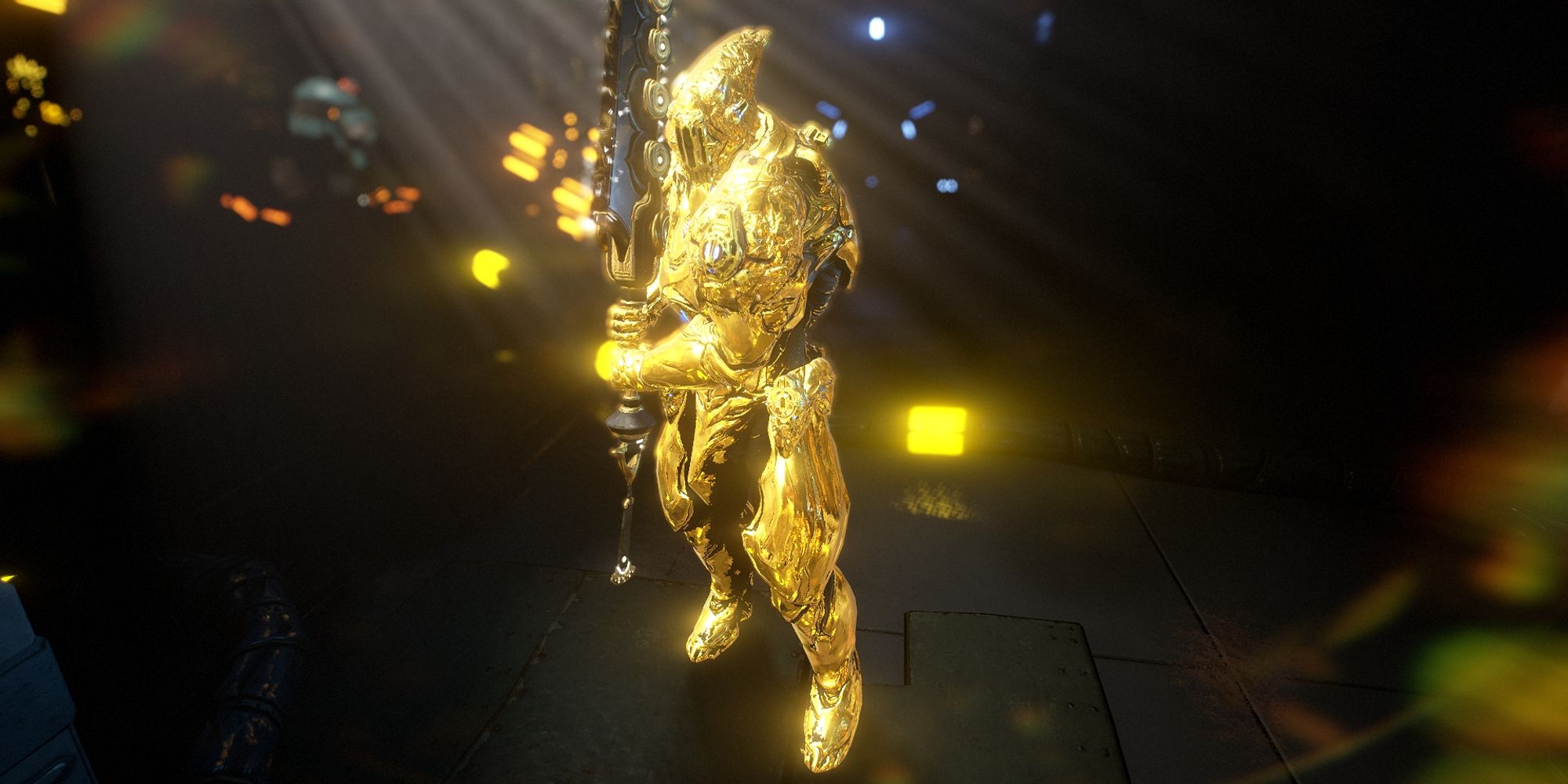 Right now, this build is easily the best one that any Rhino player can take advantage of. First off, Armored Agility, Steel Fiber and Stand United add the necessary extra Armor, with Adaptation for greater Resistance to damage. By the effect of Ironclad Charge, you can first charge against groups of enemies, and once your Armor is boosted, apply that beautiful multiplier that Iron Skin provides for an even better effect, becoming virtually invulnerable and being able to recast Iron Skin if needed using Iron Shrapnel. Power Drift, Intensify and Transient Fortitude will add enough Power Strength to buff the Iron Skin multipliers, and Flow will help Rhino to have a more effective Energy Pool to draw from at the moment of using Abilities.