Warframe brings you to the Origin System, where an endless war between factions occurs across several planets. In the center of this never-ending battle are the Tenno, a group of legendary warriors that specialize in different types of combat by making use of their weapons, abilities, and warframes.

One of the various warframes that you can obtain in your adventures is Hildryn, a shield-based warrior that specializes in protecting herself and others with her defensive abilities, while also hitting hard with her exalted weapon. Here's everything you need to know about her. 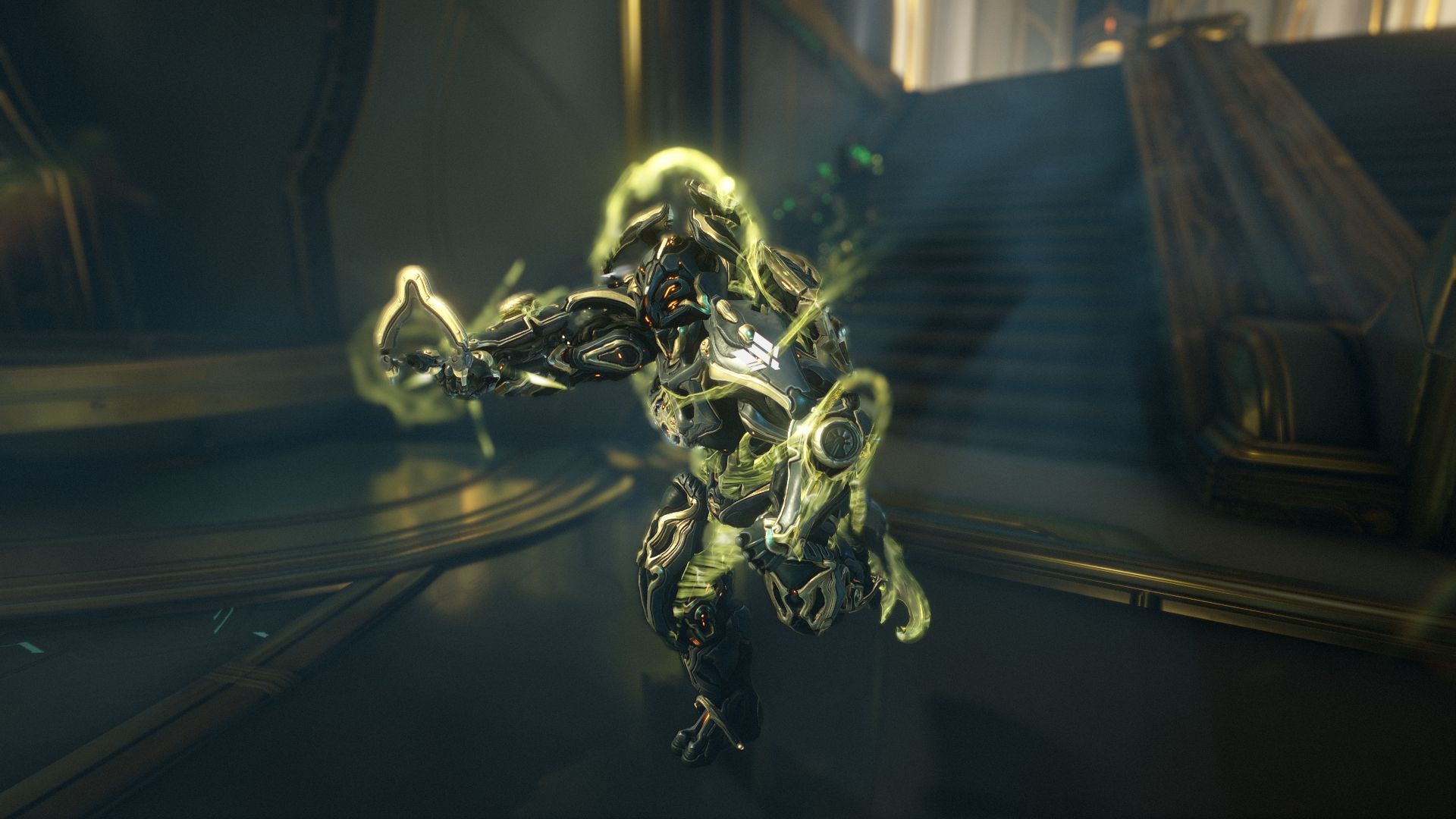 To craft Hildryn, you have to obtain her Main Blueprint, which you can buy from Little Duck for 5,000 Standing upon reaching the rank of Agent with the faction Vox Solaris, in Fortuna. To obtain the remaining Blueprints, you have to defeat the Exploiter Orb in the Orb Vallis. The materials involved in the crafting of Hildryn's components (such as Thermal Sludge, Gorgaricus Spore, and Mytocardia Spore) are obtainable in that same area. 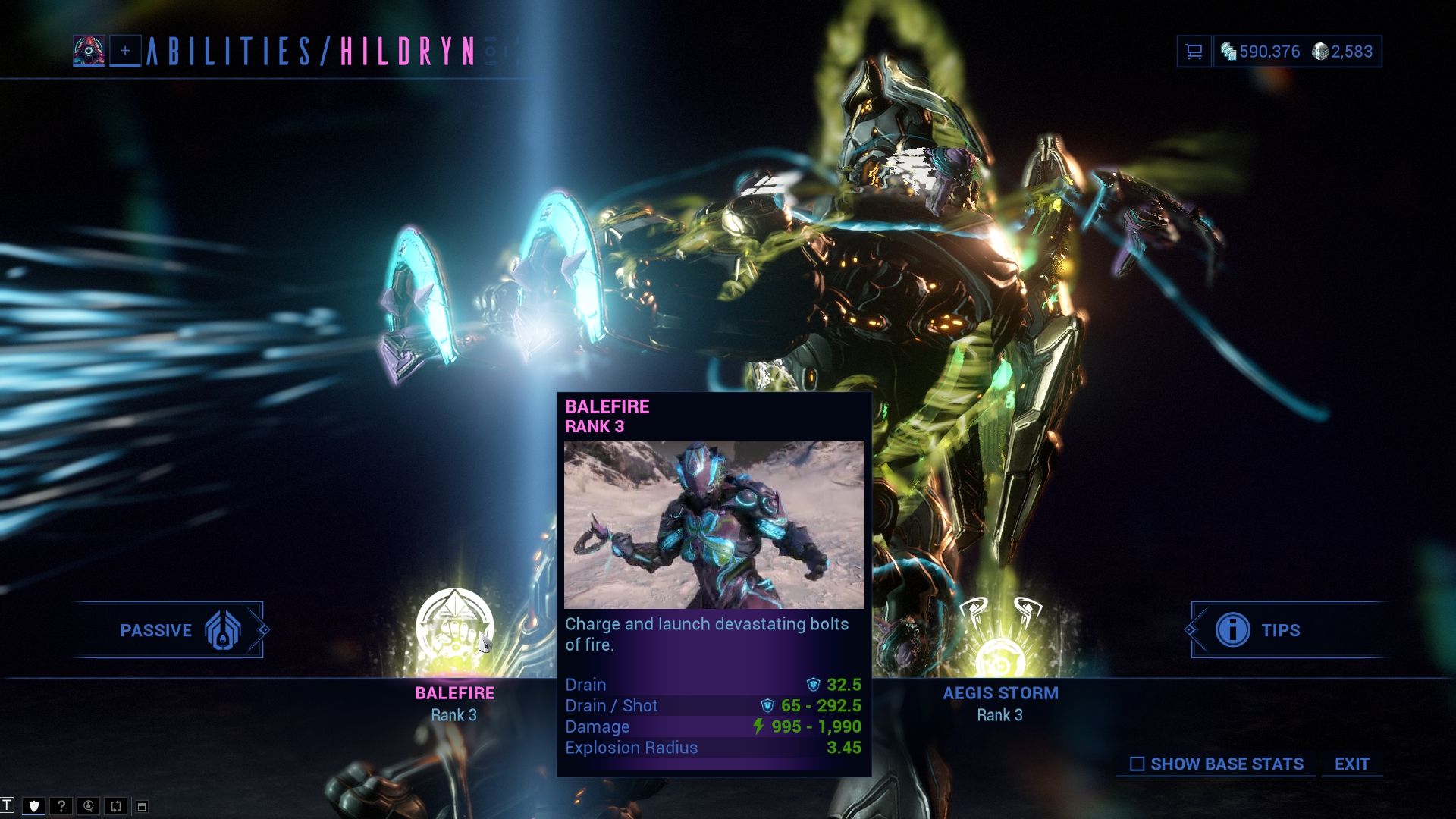 The first ability, Balefire, will make use of the Balefire Charger, and activating it will equip this Exalted weapon so you can use it to annihilate your foes. Using it while Aegis Storm is activated will unlock a second Balefire Charger, and if you want to spice things further you can use the Augment Mod Balefire Surge, which allows Hildryn to restore her Shields on direct hits, and giving her the ability to wipe enemy Nullifier Shields. 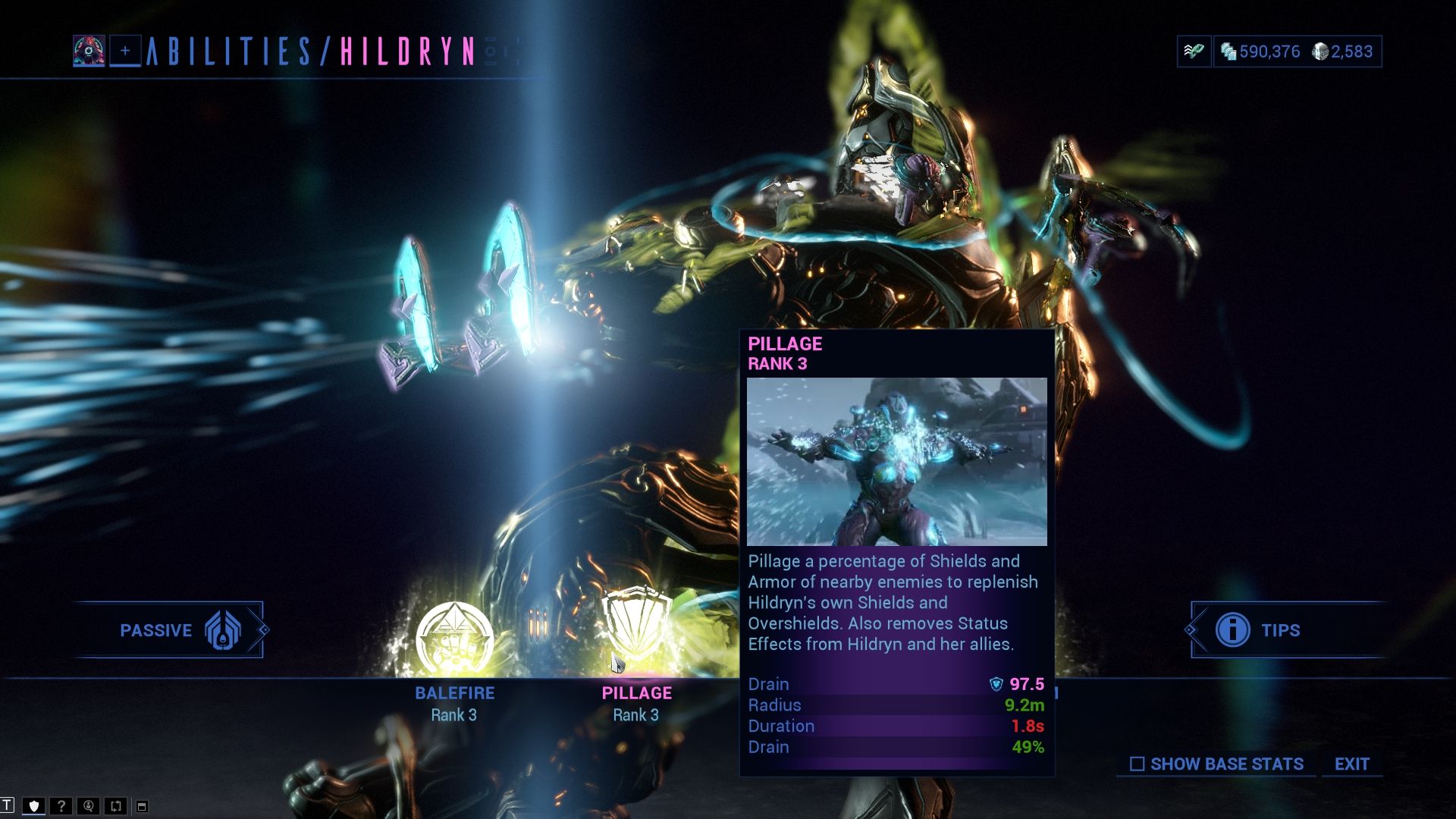 Pillage is the most important ability on Hildryn since it enables you to drain Shields from your enemies, so Hildryn can maintain survivability and regain resources to use her abilities. Furthermore, the Augment Mod Blazing Pillage makes enemies affected by Haven receive Heat damage with a guaranteed proc and restores Shields to Hildryn when hit by Pillage, allowing her to rip apart any kind of enemy, regardless of whether they have Shields or not. 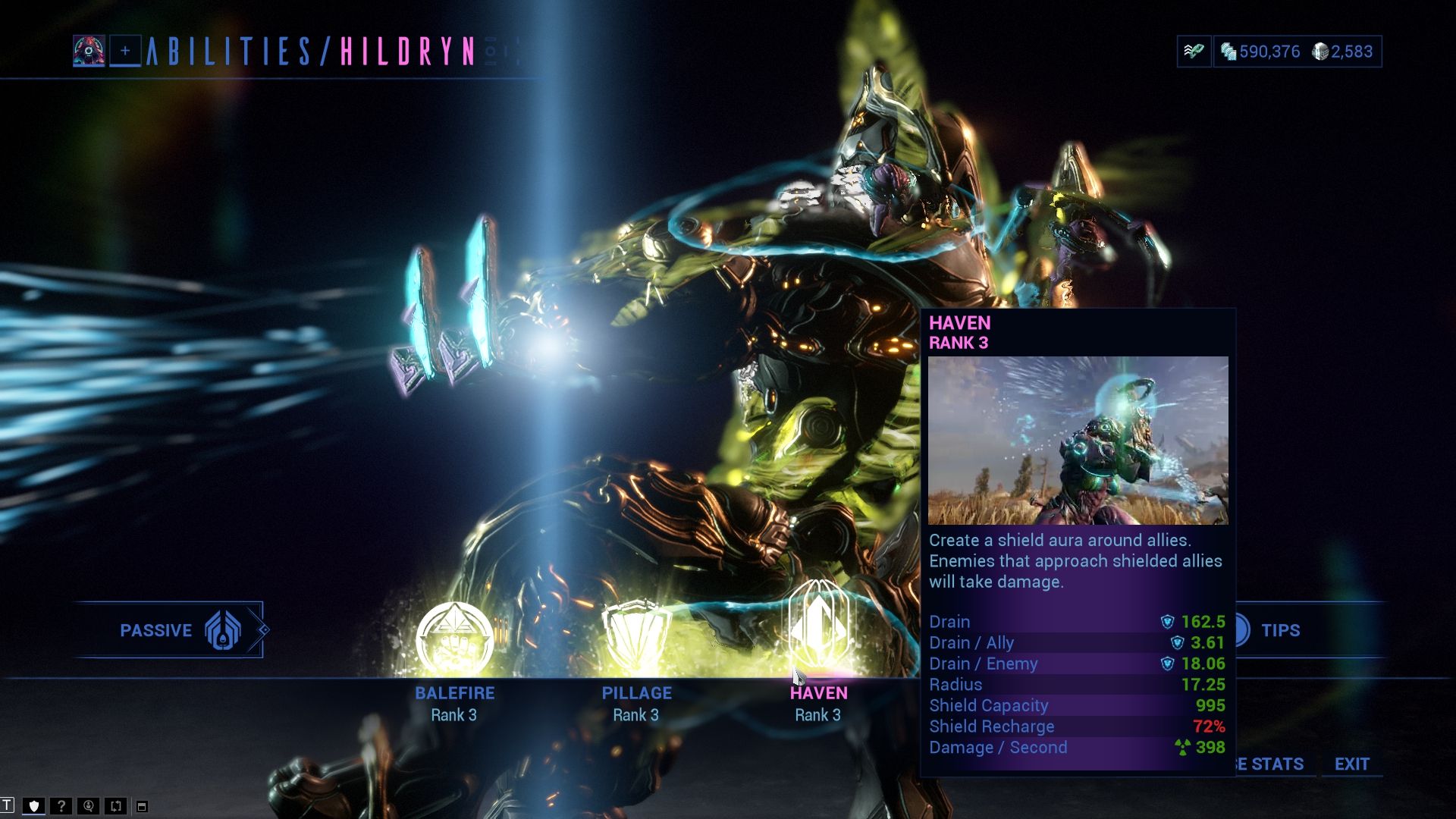 The next ability is Haven, a greatly supportive ability that will protect your linked allies with some extra buff on their Shields, as well as inflict damage to your linked enemies. As stated above and in the build section, when you combine this with the Augment Mod Blazing Pillage you can do a very serious amount of damage while recovering Shields. 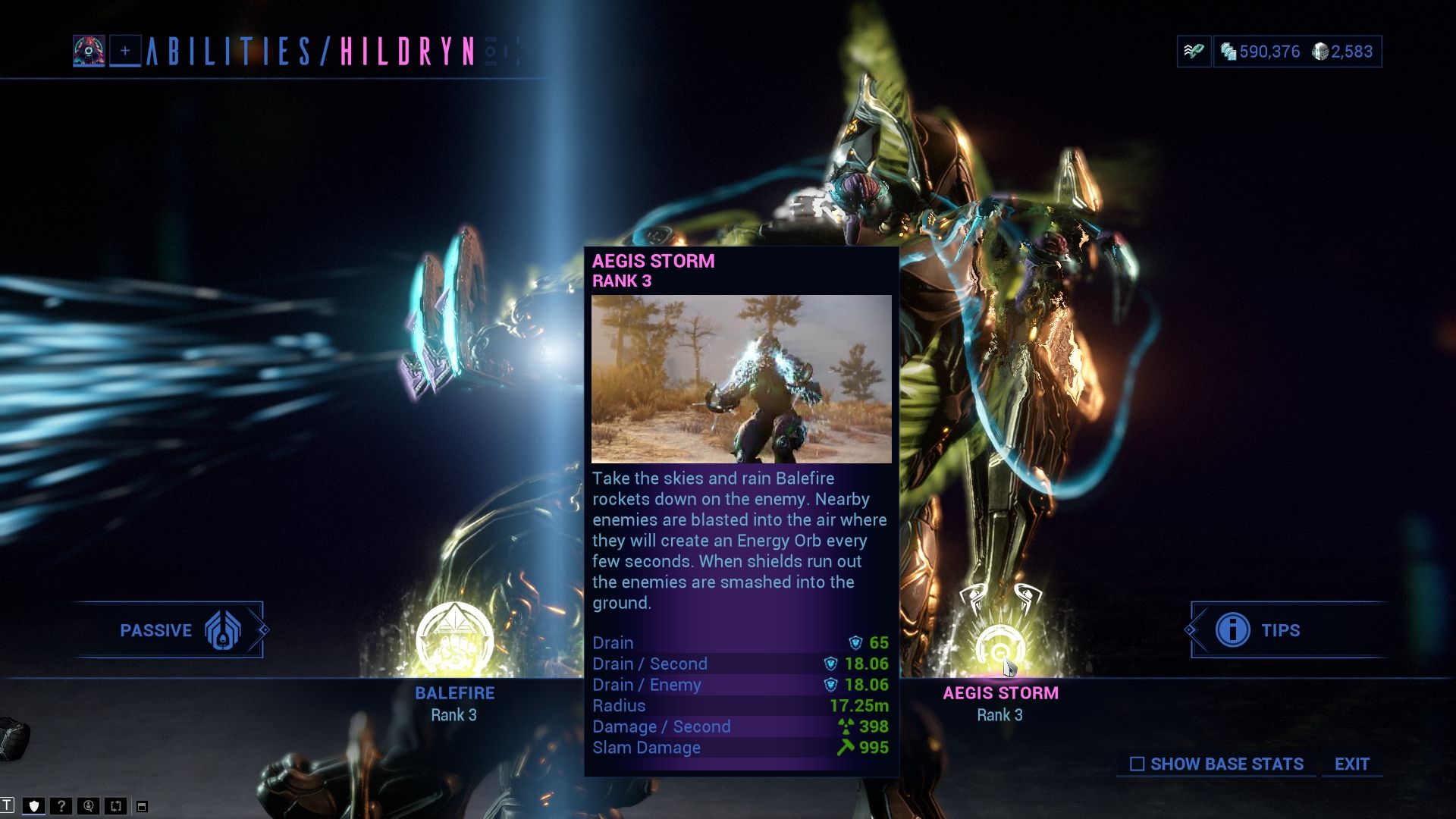 Last, Aegis Storm is an ability that, when it's activated, will give Hildryn the ability to fly up in the air, as well as lift any enemy unit around you, leaving them open to your attacks and making them drop Energy Orbs every few seconds. You instantly activate the Balefire Charger, gaining a second one to successfully obliterate your enemies as they reach your vicinity.

The idea behind this build is to allow Hildryn to use Pillage even against enemies without shields. To achieve that, the centerpiece will be the Augment Mod Blazing Pillage, which will inflict Fire damage to any enemy affected by Haven and recover extra Shields each time we use Pillage. This Mod, along with several others that reinforce her Shield Capacity, Resistances, Range, and Strength, will turn Hildryn into a weapon of mass destruction, basically killing everyone on sight whenever you use Pillage, while recovering massive amounts of shields, regardless of the faction they belong to.