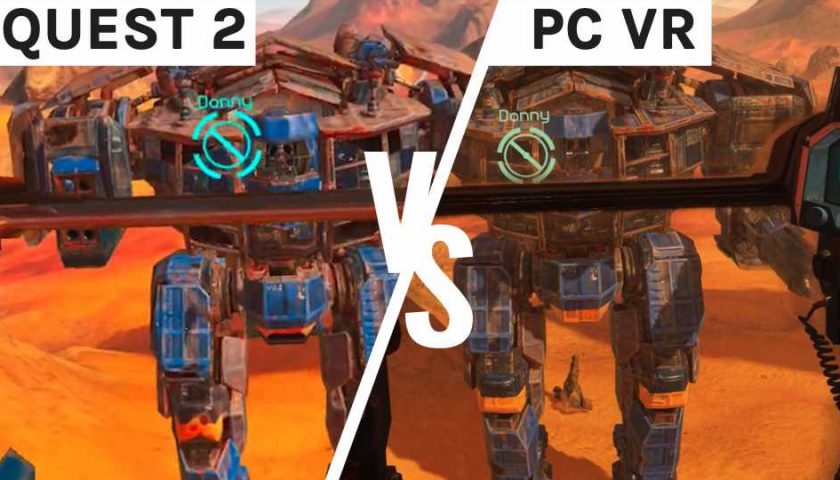 We’re back with a Vox Machinae graphics comparison, stacking up the game on PC VR and Quest 2.

And it’s a pretty great port at that.

Bringing Vox Machinae to standalone VR was surely no easy task. This is a game in which enormous machinery is detailed down to the slightest degree, set across sprawling landscapes with a dismemberment system and newly-added campaign characters and story sequences to boot.

And indeed, as detailed in a blog last month, Space Bullet went to enormous lengths to optimize the game for Quest 2. The end result definitely has some big changes. Inevitably, this version of the game isn’t as sharp as the still-impressive PC edition, with blurrier, simpler landscapes and mech models that appear meshed together in certain areas. You’ll also notice how different lighting effects and texture changes lead to harsher color contrasts, losing some of the PC version’s visual nuance.

But, those expected setbacks aside, we have to say this is a really impressive Quest 2 port that strives to retain a huge amount of visual detail, especially when it comes to the mechs. Check the cockpit controls and you’ll find the exact same setup, right down to tiny scratches and rust marks in the panels. All the outside eye-candy, from cranes swinging around to meet you to bases filled with smaller buildings, has been kept in there too.

Granted, this is a seated experience and thus there isn’t a massive benefit for wireless VR here. So, if you have the choice, we’d recommend picking up the PC VR version this time around. But if you just have a Quest 2, you’ll still be getting a really impressive experience with Vox Machinae.