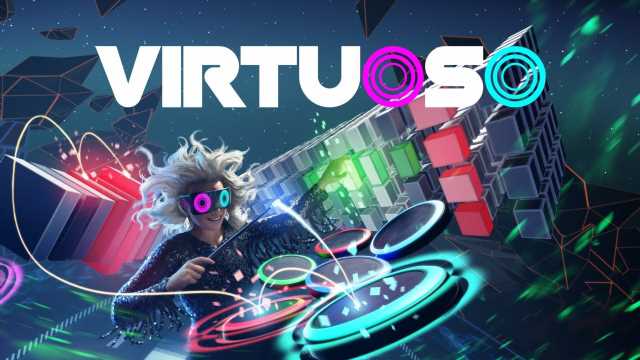 Virtuoso is available now for Meta Quest headsets, offering users the chance to play around with unique virtual instruments and basic looping software.

The app is essentially a creation tool and music sandbox built for VR, developed by Reality Interactive and published by Fast Travel Games. It started its life on SideQuest and App Lab, but today moves across to a full release on the Quest Store.

Reality Interactive aims to provide something for everyone with Virtuoso — whether you’re a complete beginner who has never played an instrument or a professional musician, there should be something for you here.

I’ve played around with the app throughout the week ahead of launch and found it was an engaging way to experiment with musical ideas in VR. Unlike apps like Survios’ Electronauts, which lets you remix and edit existing tracks, Virtuoso is all about creating your own music from the ground up. In some ways, it feels like a VR version of software like Garageband, with some key differences.

While something like Garageband focuses on recording and reproducing the sounds of real instruments, Virtuoso features instruments that are unique and built for VR, organised in a way that wouldn’t work in a 2D environment. There’s six made-for-VR instruments, each offering a different type of sound and technique.

The Oorgan instrument, for example, is a 3D grid of cubes that can be played on three different axes, separately or simultaneously. Different controller buttons will engage different notes and allow you to change notes across one axis while sustaining a different note on another just using one hand. It’s an instrument completely unique to VR, that wouldn’t work in any other format. For those that want to go deeper, you can adjust the tone and effects of the Oorgan (and many other of Virtuoso’s instruments) as well.

Once you get the hang of a few instruments, you can begin to build your own virtual studio with Virtuoso’s tools, arranging the instruments into any configuration you like in 3D space. This works particularly well with the empads, allowing you to arrange and create your own fully customizable drumkit with whatever parts and tons you see fit.

Once everything is in place, you can begin to build out a track with the looper function — essentially a loop pedal that lets you lay down loop tracks for each instrument. You can then group loops together in several groups and turn each on and off at will, either through the menu or with drum-like pads you can hit.

This is where you start to get into the real meat of what Virtuoso offers — you build up a beat, add some backing tracks, maybe some vocal harmonies using the microphone and then run wild with all the options available.

The tape recorder will let you record any music you’ve created, so the app starts to become a mini piece of music production software. Once you get loops built up, you can turn them on and off in sequence and start to create an entire song.

If you’re well acquainted with music theory and production, there’s a bit more depth to play around with — you can change the scales and available notes for each instrument, and play around with effects settings for each as well. But if you’re completely unfamiliar with musical scales, each instrument is set up with a default scale that should sound pretty good to mess around with, even with no knowledge. There’s even tempo sync options, that will ensure beginners can lay down tracks that stay on beat even if their timing is slightly off.

It’s a pretty fantastic concept and I enjoyed building up melodies and harmonies using my voice and the synthesizers, but it’s hard to tell the extent to which musicians will be able to push Virtuoso as an actual tool for music creation. While I’ve not spent a huge amount of time diving into everything on offer, on a surface level it does seem more like a fun app for a casual audience than something for serious creative projects.

It’s not that the tools don’t facilitate that — they seemingly do, to a certain level — but the focus on its VR-specific instruments restricts the type of music you can create. This isn’t a production tool to recreate or record tracks using existing instruments like guitar or piano — it works purely as a creation tool for Virtuoso’s instruments specifically, all of which fall into a broad but similar synthwave-sounding aesthetic.

That being said, it’s amusing to play around with and the tools for looping and recording instruments are surprisingly well thought out, both in terms of depth and intuitive VR design.

Virtuoso is available now for Meta Quest, Oculus Rift and SteamVR headsets for $19.99. We’re looking forward to seeing what everyone can create — let us know how you go in the comments.