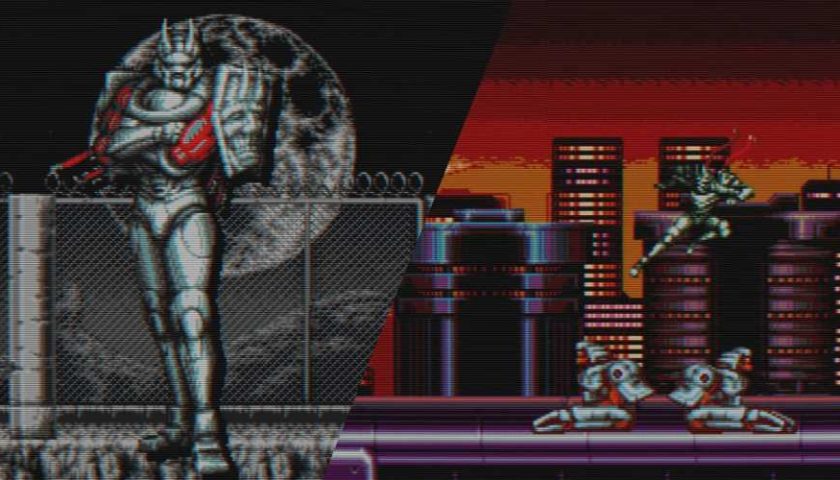 The sooner you get a handle on your controls, and come to grips with the way the levels have been designed, the sooner you will get the whole Vengeful Guardian experience. Allow us to give you a few pieces of advice to help get you pointed in the right direction!

Your Most Powerful Attack Is Your Dashing Strike 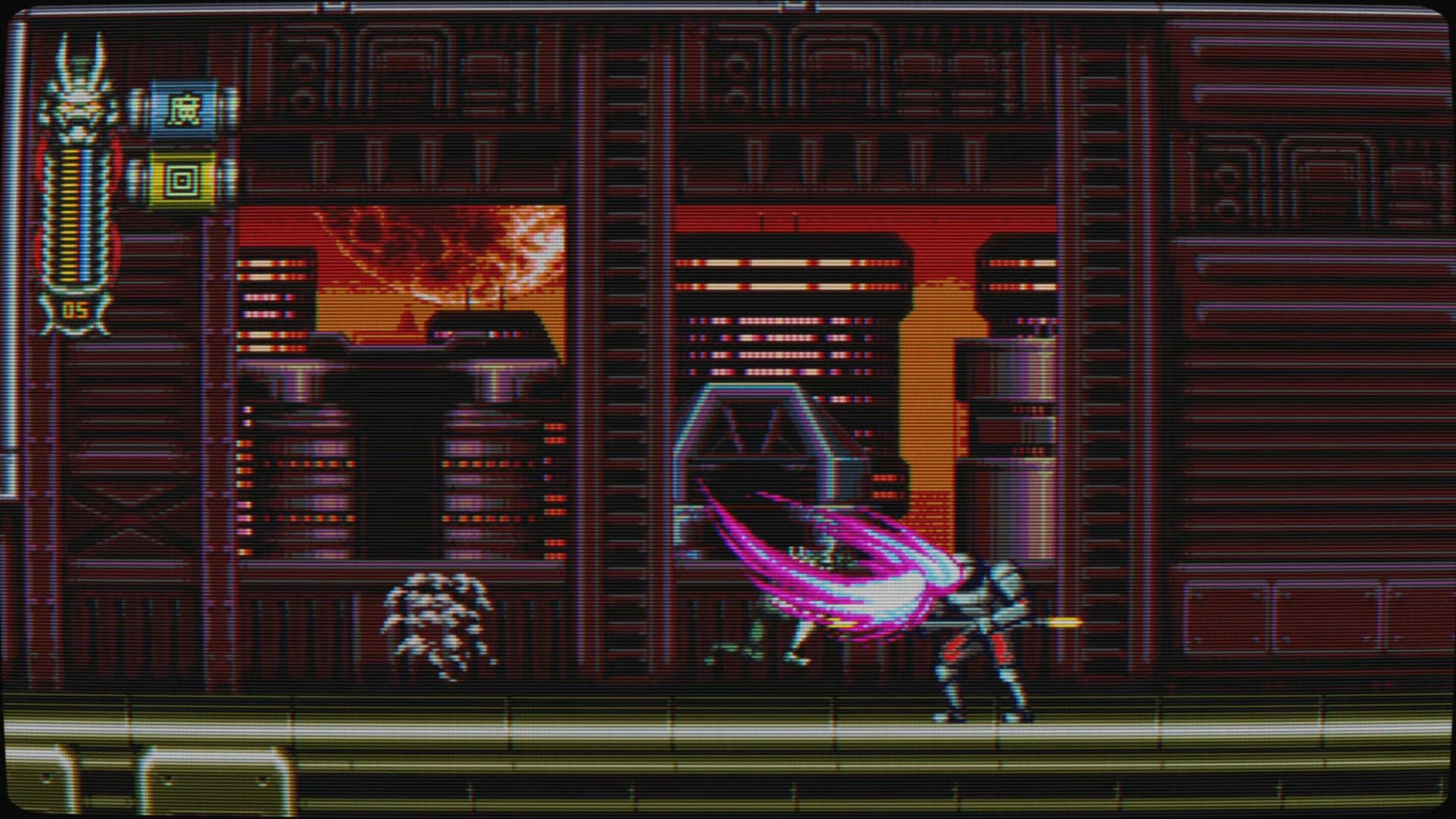 When it comes to dealing with the standard foe in Vengeful Guardian, this is often going to be your go-to move. One Dashing Attack is worth four regular slashes. FOUR! That is huge. However, while you are going to want to use this attack frequently, there are two substantial downsides to it that you will need to wrangle.

For starters, there is startup time and recovery time. So, that means you are going to need to be pretty quick with your execution and make sure you are on point with your spacing. Moreover, you are not invincible when you are using this attack, and it carries you forward. This means that if you perform this attack too close to an enemy, it can carry you into them and cause you to take damage. That being said, you are always going to be mid-dash in Vengeful Guardian, and it quite simply does too much damage to not use frequently.

When you perform your dashing slash, you are airborne during part of the animation. This does mean that you will be able to hop over some projectiles that travel along the ground using it. This is a pretty slick way to evade attacks while also landing a big one of your own.

The Dive Kick Is King 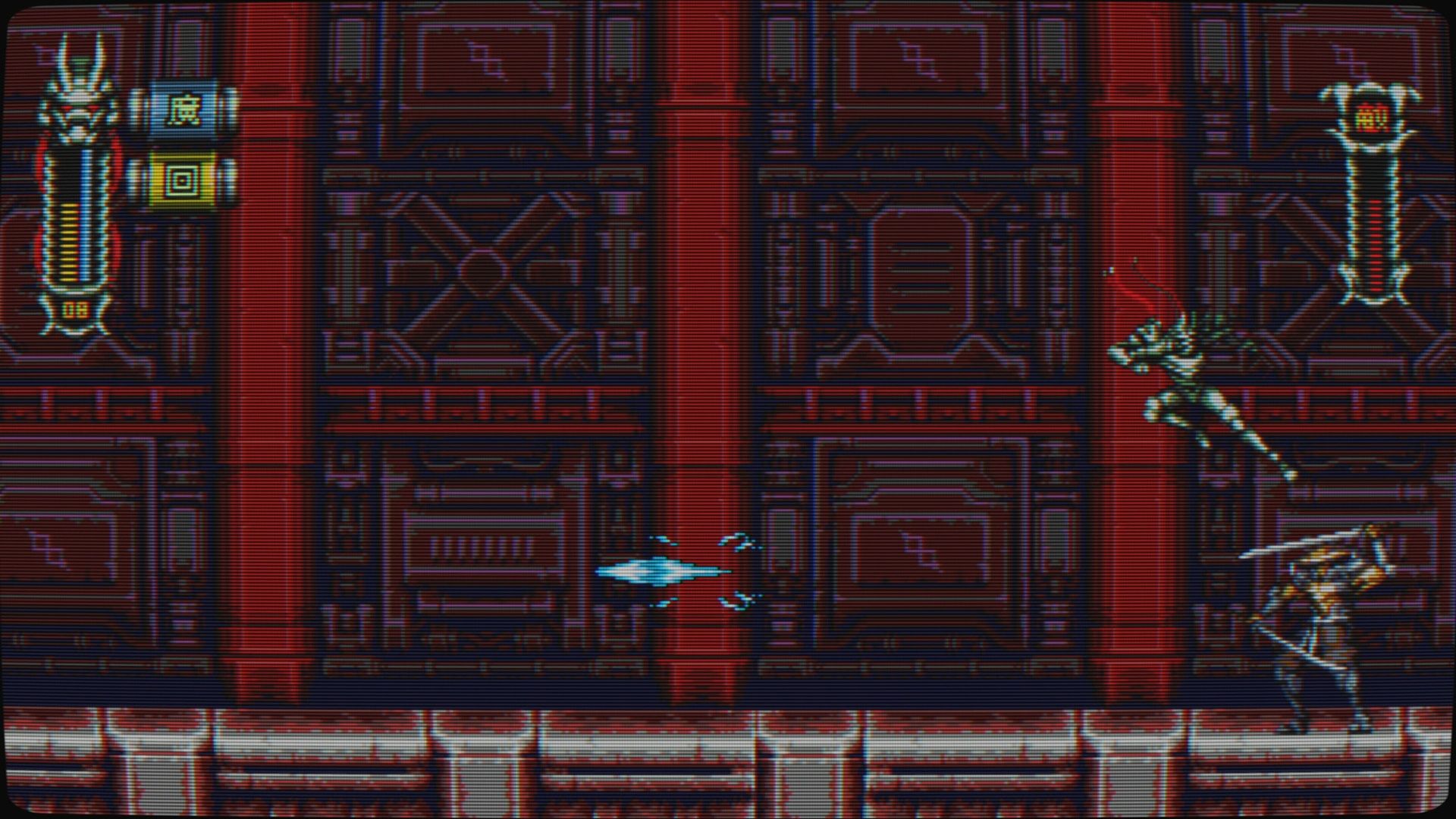 So, while your most powerful attack is your Dashing Strike, your most important attack is the Dive Kick. We can't emphasize this enough. It is slightly more powerful than your standard slash, but that isn't its primary appeal. What makes it great is how much mobility it provides and how it allows you to avoid your opponent's attacks.

You need to get a feel for this attack. The diagonal version (forward and attack in the air) has a more generous hitbox than the purely vertical version (down and attack), but you will want to use both. So make sure to get used to the spacing of both variations. Once you land a successful dive kick, you will always have the opportunity to follow up with another. This will keep you suspended in the air, which will allow you to avoid all grounded attacks. This move is pivotal for taking down a number of bosses in the game. Master this move, and you will be far better equipped to start racking up those S-Rankings! 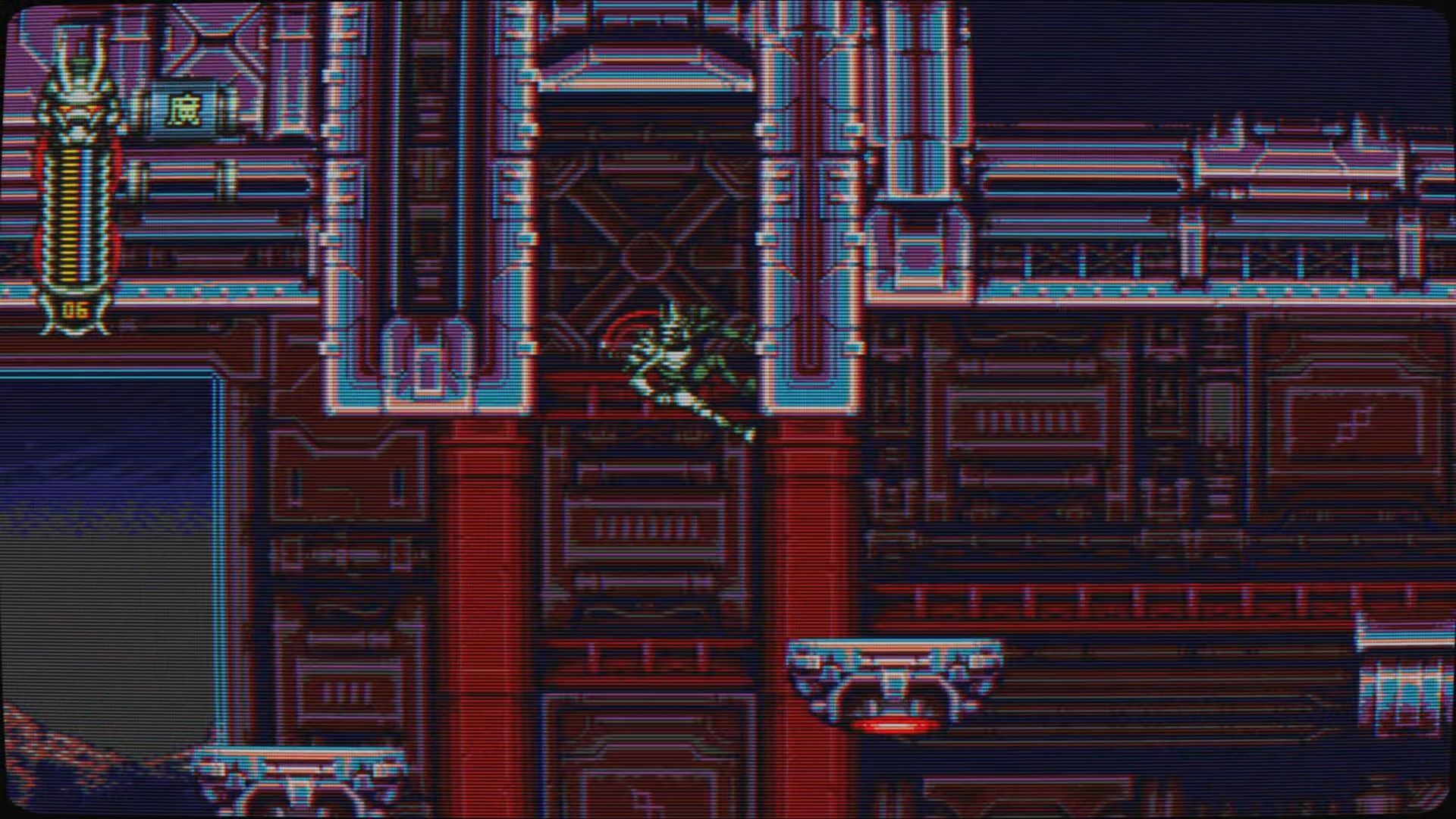 While combat is certainly the primary emphasis here, this is an action-platformer through and through, so you will be doing quite a bit of platforming as well. Of course, you're going to be using the aforementioned Dive Kick during the platforming, but you will also be clinging to walls pretty frequently and making precise jumps.

The wall cling will take some getting used to. Unlike in some other ninja-themed 2D platformers, you don't automatically cling to a wall once you make contact with it. Instead, you need to press the jump button a second time. Use this to get the trajectory just right for the follow-up jump. As for the precision jumping, just remember that the longer you hold down the button, the higher you will jump. This means that a quick tap will lead to a short hop. This hop is vital for narrow sections with hazards on the ceiling.

While there are many obstacles in Vengeful Guardian, the one thing you never have to worry about is instant kill stage obstacles. Even falling off the stage in the Asura's Fleet stage will just cause damage.

Speed Is Your Difficulty Modifier 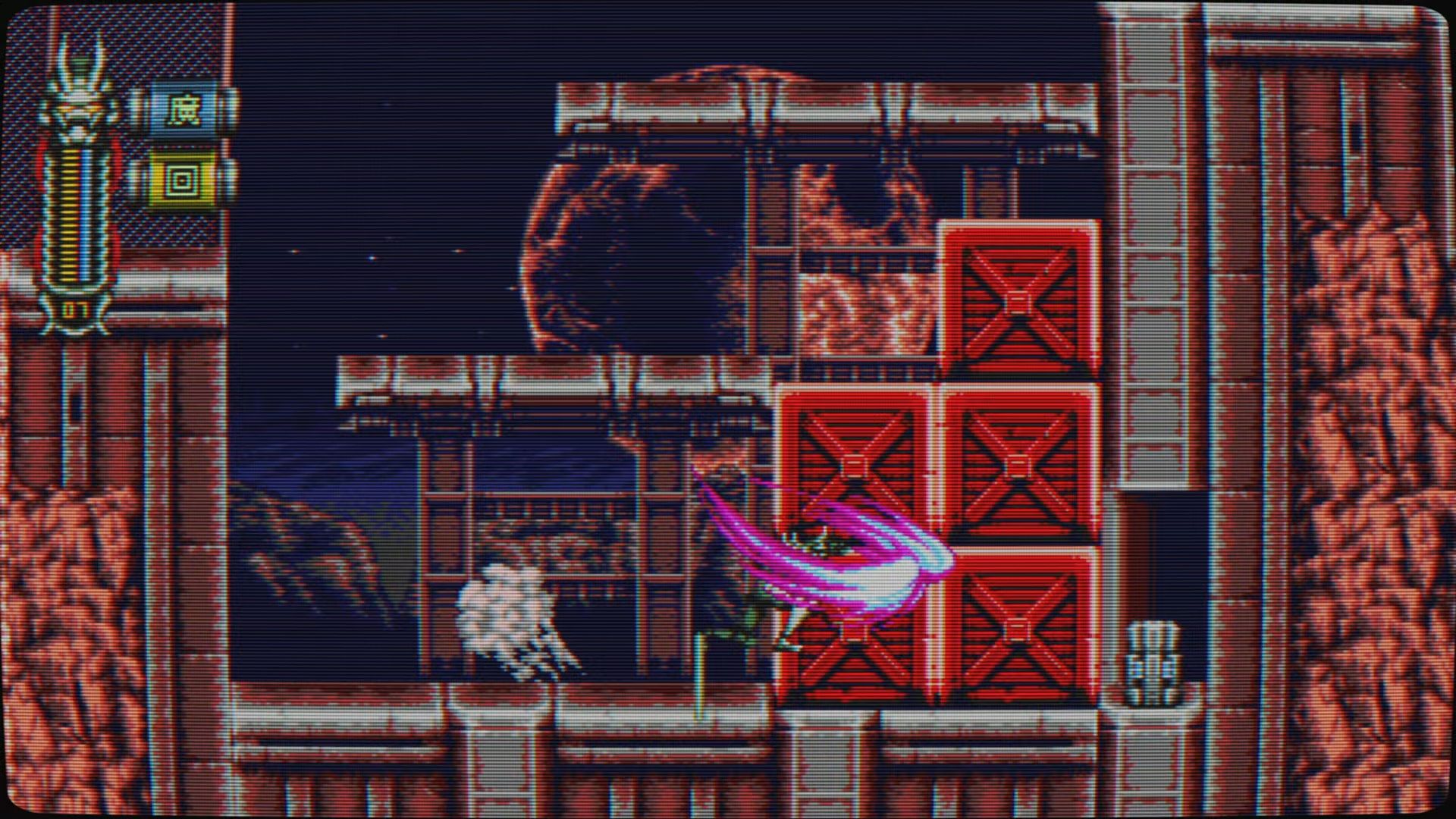 One of the unique balancing mechanisms is that Vengeful Guardian will actually provide you with a number of health-regenerating items. However, acquiring them will often require that you spend extra time traveling off the beaten path, or hammering away at blocks that are able to withstand multiple strikes from your sword.

So, if you are primarily concerned with completing the stage, and you aren't concerned with your end grade, travel down those divergent paths, and you will be rewarded with health recovery items, MP recovery items, and extra lives. Though, once again, this is going to destroy your chance at a high score. If you want a high score you are going to often have to forgo health recovery pickups.

If you are looking to make your time in Vengeful Guardian even smoother, intentionally get a game over. This will provide you with an armor upgrade that will make you substantially more resilient, though it will also cap your achievable score at a B.

If You Get Stuck, Come Back With A New Power 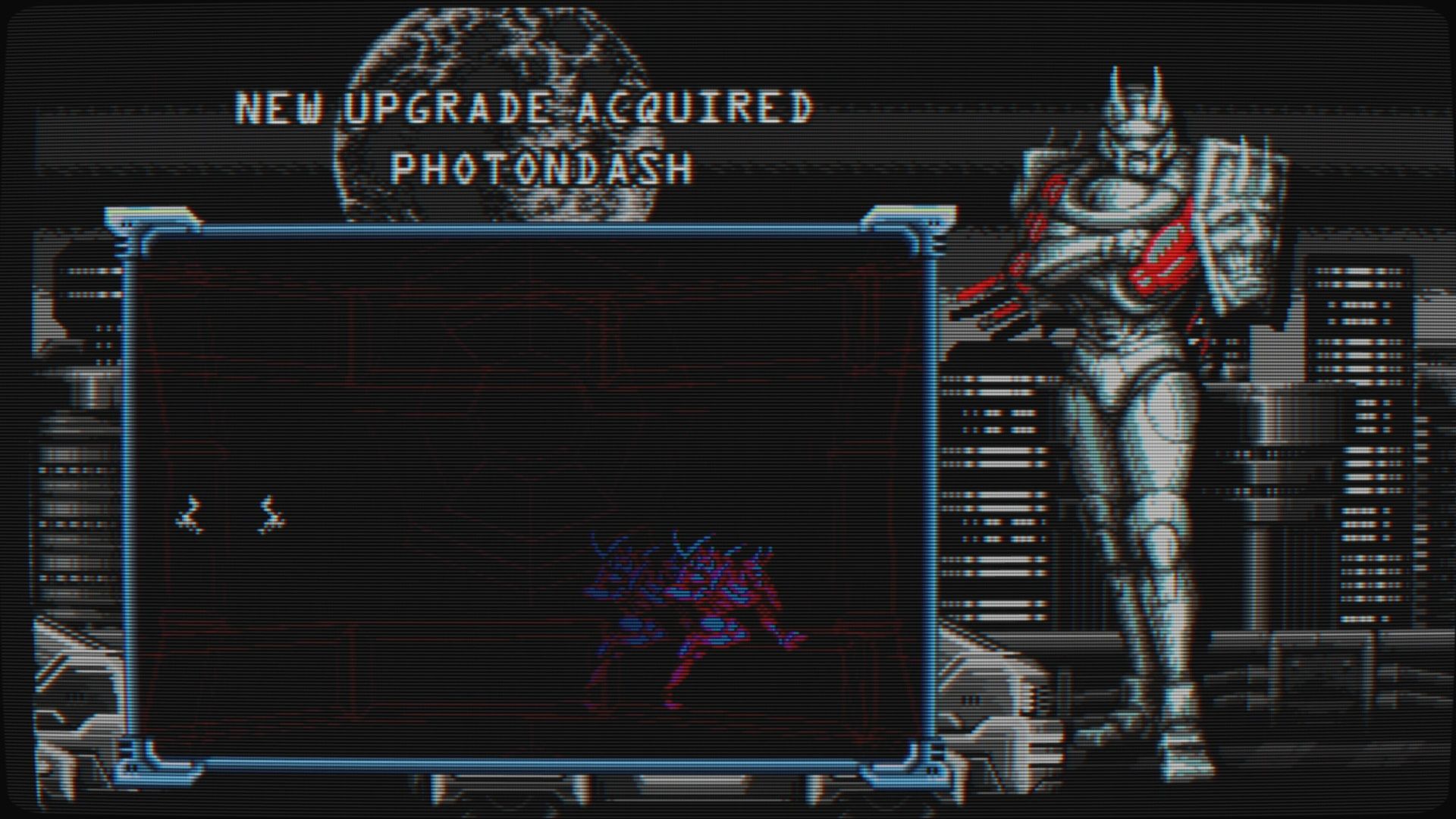 There are a lot of Mega Man-esque design elements in Vengeful Guardian. It isn't just the ability to freely select different stages. You will also be rewarded with new special abilities once you defeat a stage boss. Now, these weapons don't tend to absolutely decimate bosses like some Mega Man weapons do, but they add a lot of versatility to The Guardian's moveset. As an example, you get a special dash attack that can get you out of a number of fight attack patterns, while also damaging any enemy you move through.

So, if you are struggling with a particular boss, don't be afraid to back out and come back later when you are better equipped. Just keep an eye on the new powers you acquire when you complete other levels, and return when you have an ability that would help you overcome said boss' particular attack patterns. 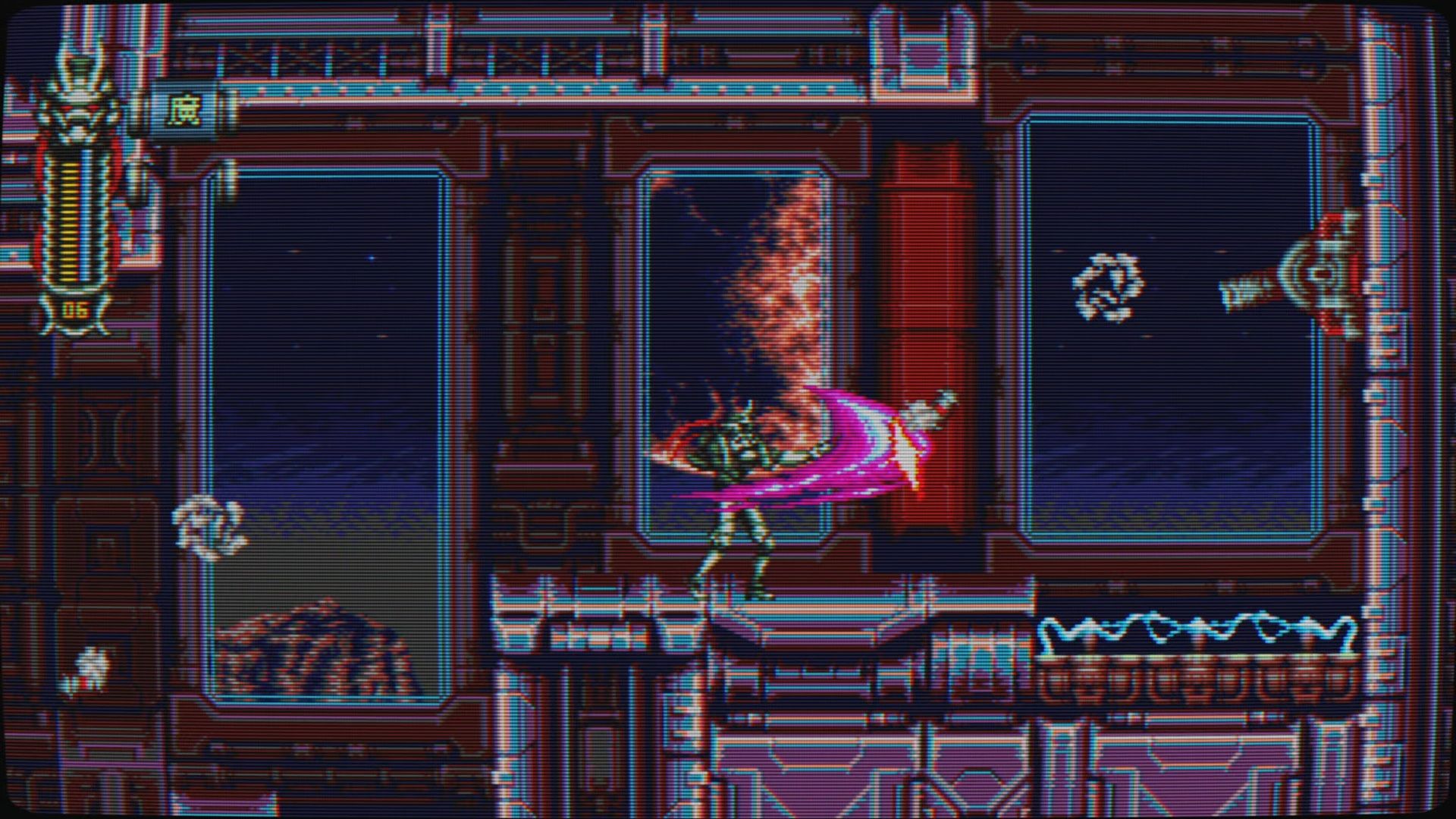 One of the many fun little nuances you will encounter in the game is the ability to nullify projectiles with well-timed sword swings. While more often than not, this is something you do to look cool, there are some pretty practical applications of this skill. Some of the projectiles, such as the grenade canisters, will actually be sent straight back at an enemy. This is easily the best way to deal with those Grenade-Launching Turrets.

The Grenade-Launching Turrets emit a beeping sound just before they fire their explosive canister at you. Use this sound to time your sword swipe.

However, there are a few things you need to keep in mind. First and foremost, the majority of boss projectiles cannot be deflected. Secondly, with the normal enemies, you will always deflect using your standing slashes. Even if the enemy is crouching when they fire. Your crouching slash will go under an enemy's crouching projectile.

You Only Need To Find Hidden Items Once 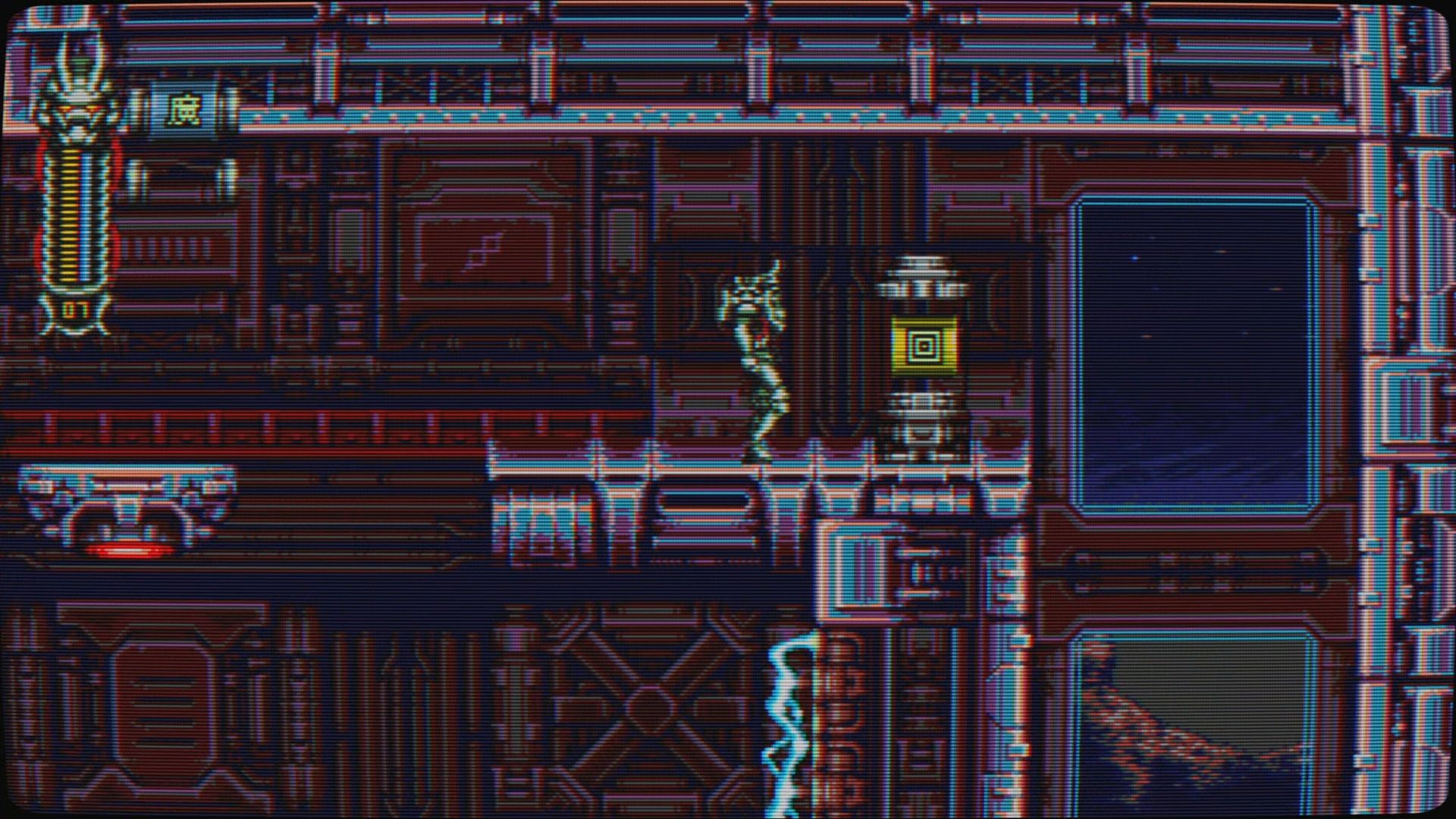 If you find that you are done with a certain stage, and you want to return later to approach it again, know that all the hidden upgrades you find are yours permanently the moment you acquire them, even if you decide to duck out early. So, you will only ever have to collect hidden items once.

Another benefit of this is that if you stumbled on an obstacle, ruining your run-time, you are free to restart the stage without consequence. This also means that you can slowly comb through levels you have already beaten looking for the items you missed and then, once you have found them, leave. In this respect, Vengeful Guardian: Moonrider respects your time far more than the majority of retro throwbacks.

It Is Okay To Skip Enemies 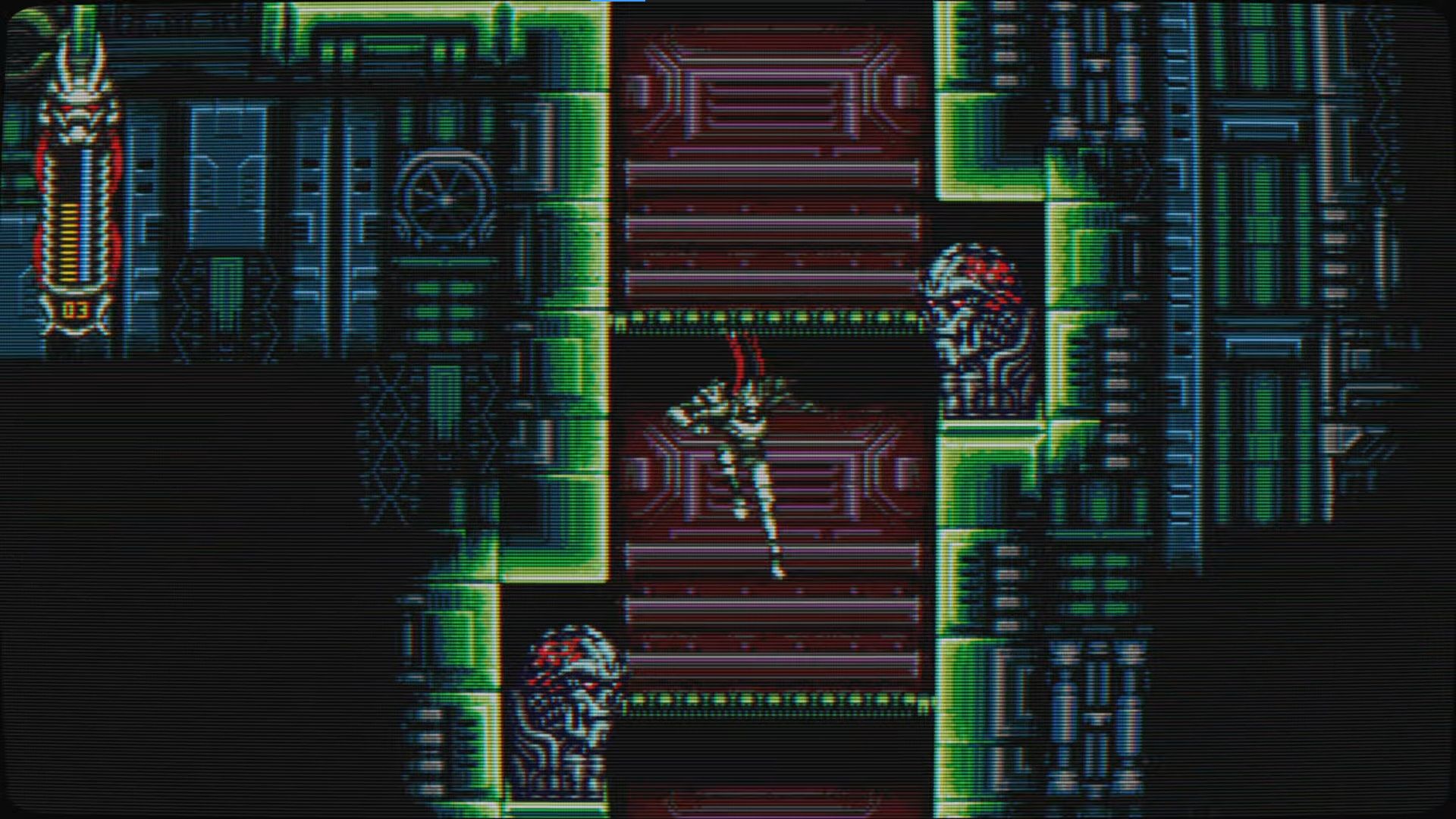 So, even if you are looking to get an S-Rank in any given stage, Vengeful Guardian: Moonrider is much more concerned with completion time than it is the score you racked up from taking out troops. There are a number of instances when taking out an enemy will simply take too much time to justify sticking around and taking out an enemy.

Some enemies, such as the Shielded Soldier, also force you to stick around and wait for them to become vulnerable. There is no shame in just hopping over them and peacing out. In fact, it is often the smart play. 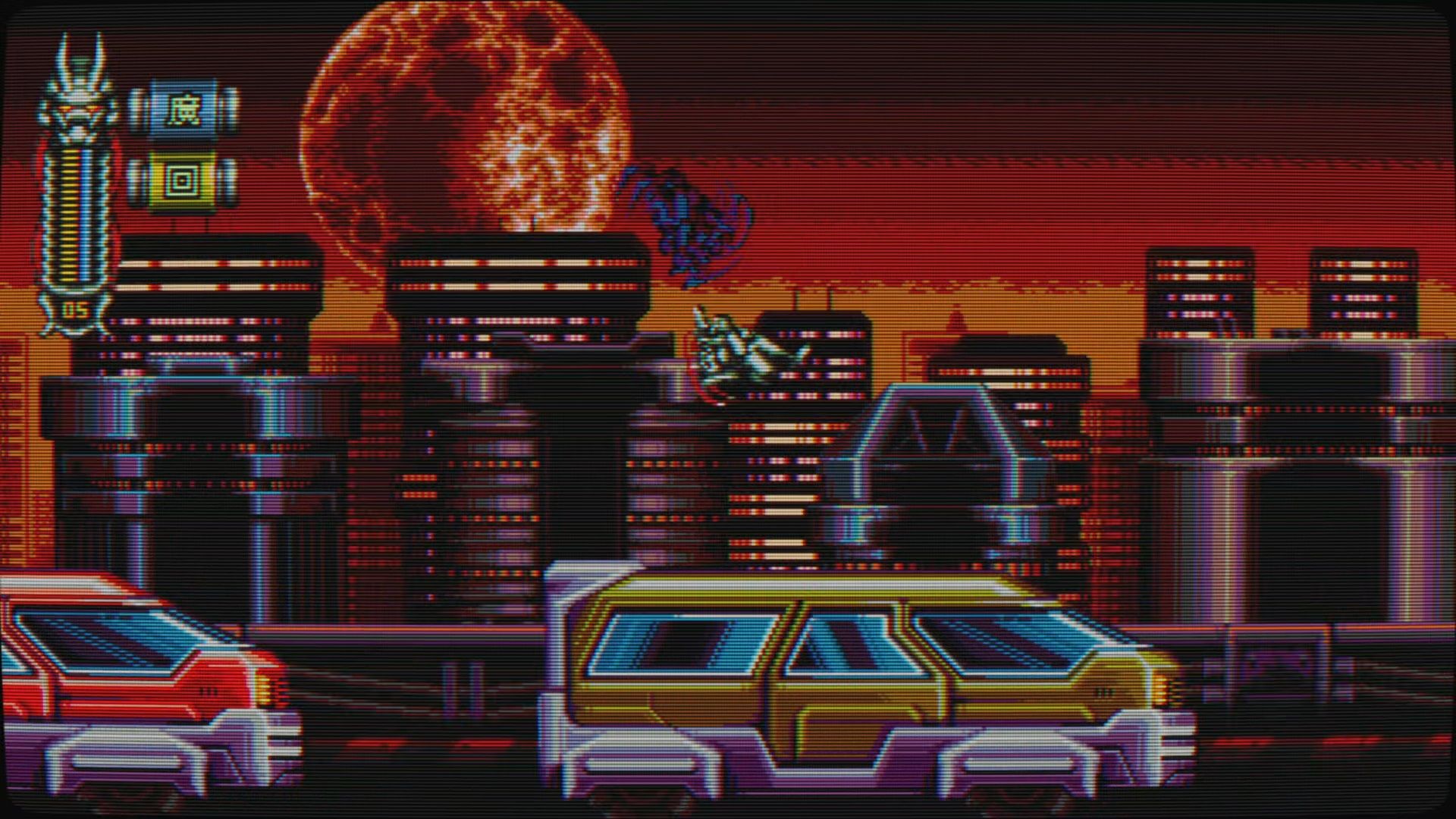 If you are looking to get a little more mobility, you will want to start with the Lost Ruins stage. The hidden power-up in the first section of this stage is a double jump! Destroying the boss of the Iwondonilo City will grant you the Photondash, which is an incredibly fast dash that will provide you with some invincibility.

Both of these tools, when added to your already excellent Dive Kick, only serve to further your ability to fly through each stage (literally). Getting both of these potent tools early will be a huge boon. 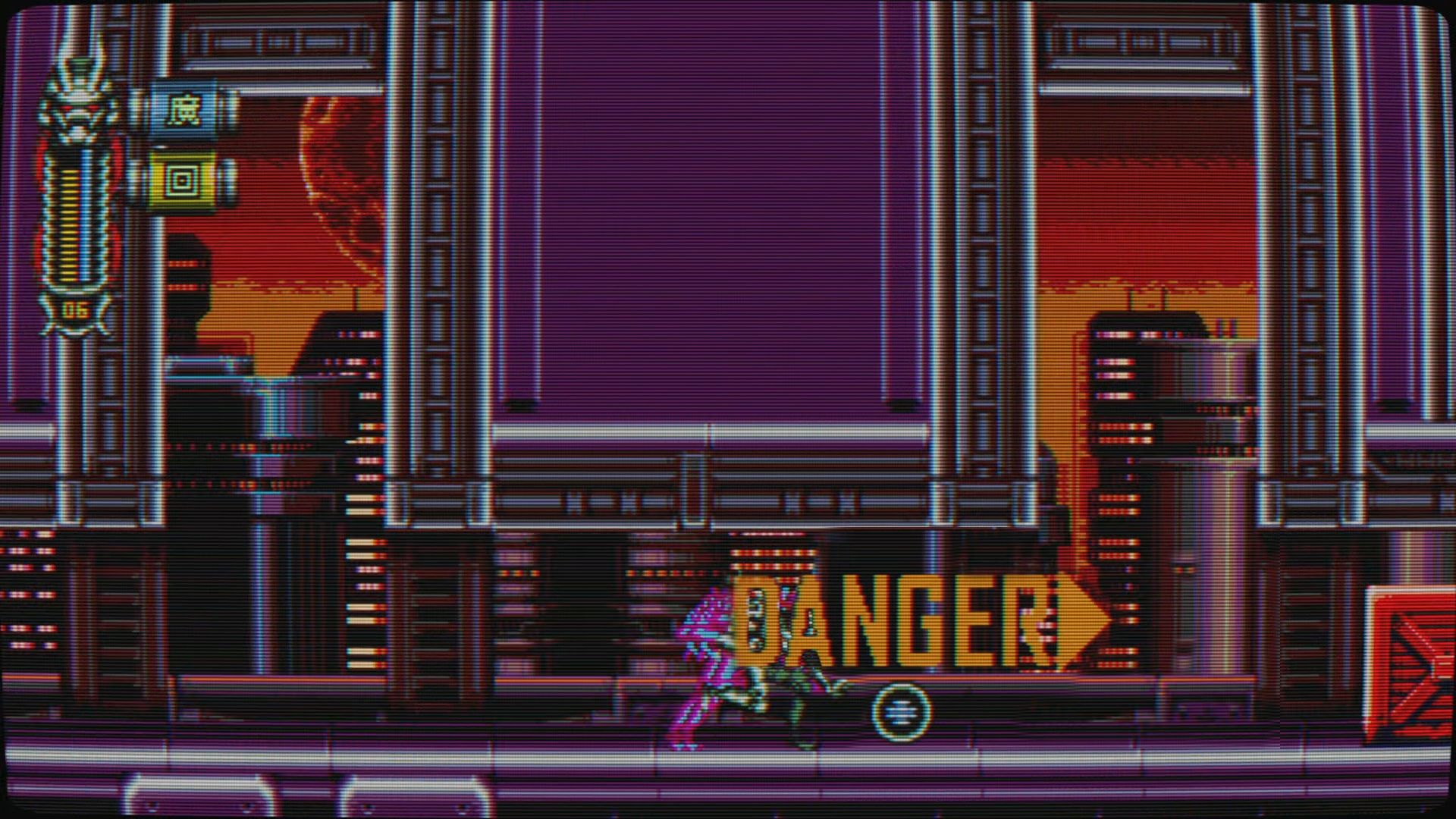 If you are looking to get the highest grade possible, damage boosting will be a huge help. For those not in the know, damage boosting is when you intentionally take damage so that you can bypass obstacles. Vengeful Guardian is not stingy with health recovery items. They tend to be sitting on the main path right after you overcome a series of stage hazards.

So, if you are at full health, it may not be a bad idea to intentionally get hit, and then take advantage of your temporary invincibility to whiz past an obstacle that would ordinarily force you to wait it out. You can save a ton of time and the game doesn't seem to penalize you for taking damage.