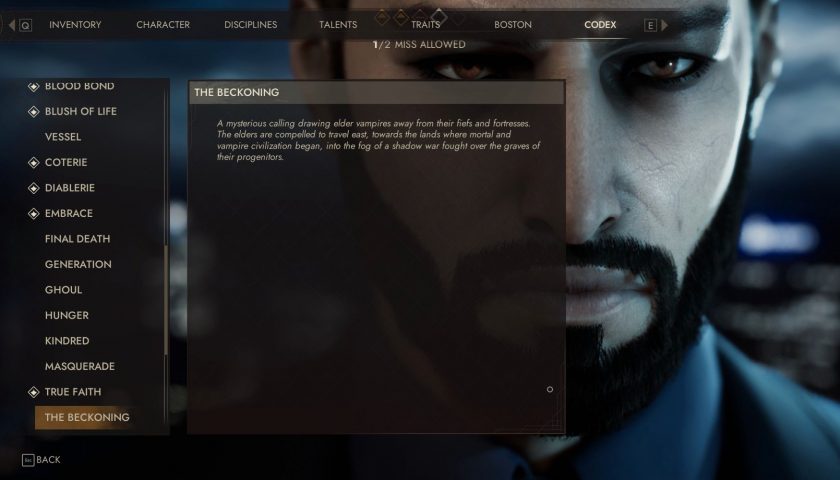 Vampire: The Masquerade – Swansong is a brilliant introduction to the World of Darkness for anyone who always wanted to take a trip, but was too afraid to ask. But, like any on-ramp to a new universe, Swansong can be a bit of a baptism by fire.

As the game begins, you see brief glimpses of a variety of characters before you’re thrown into a conversation between two, Emem Louis and Journey Atkins, without introduction. As Emem, you attempt to calm Journey, who is worried because they have been called to a meeting with all of Boston's vampires to discuss the Prince's declaration that they are under a Code Red. During this preliminary conversation, you will have to make choices and attempt to win small confrontations. You don't know anything about these characters or what they stand to gain from this. As the mission plays out, you swap between three characters, Emem, Galeb, and Leysha, each with their own web of relationships and personal history. Because this is a vampire game, that history often stretches back several centuries. It's a lot to take in.

Thankfully, Vampire: The Masquerade – Swansong has one of the best codexes I've seen in years. Separated into two tabs — Boston and Codex — it's a wealth of information on the world and characters of this game, for one, but also the broader World of Darkness. Even after I finish the game, I'm contemplating keeping Swansong installed on my PC for the next time I get the urge to replay Vampire: The Masquerade – Bloodlines. It's a handy reference for the game I'm playing right now, but it would also enrich my experience with an all-time classic that I already love. 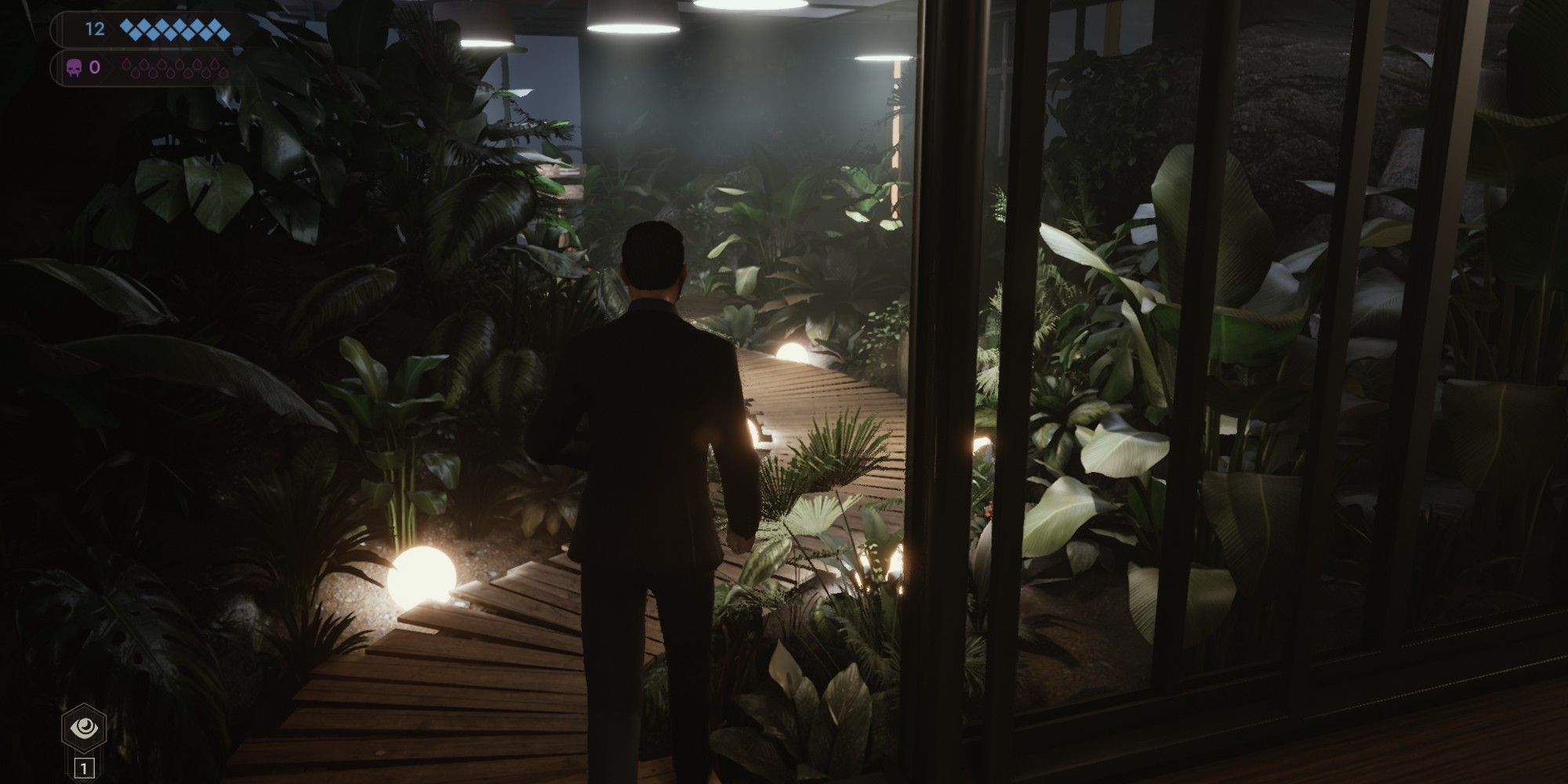 The Boston tab contains information on the three protagonists and most of the other characters you meet. Meanwhile, the Codex section defines the important terms of the game and outlines the characteristics of the vampire factions. For example, the Boston section tells you that playable character Galeb Bazory is the sire of Berel Underwood, or that protagonist Emem Louis is the childe of Hilda MacAndrews. You might be able to infer what those words mean from the context, but if you want to know for sure, you can tab over to the Codex section and find the entry for childe — "A vampire created through the Embrace, the childe is the progeny of their sire. The term is often used derogatorily, indicating inexperience." This not only gives you a definition of the term, but it fills in information on the tone with which it might be used. It also gives you another intriguing term, Embrace, to look up.

Swansong doles this information out at a smart pace. Characters are added to the Boston section as you meet them, and terms are added to the Codex tab when they're mentioned in conversation. When something is added to the codex, a notification will appear on screen, and you can tab over to it then and there. It's not as fully integrated as something like Pyre's reference system — which lets you hover the cursor over an underlined term to view its definition — but I actually prefer this. If I want to learn something, I can. If I want to continue playing, I can ignore the prompt. 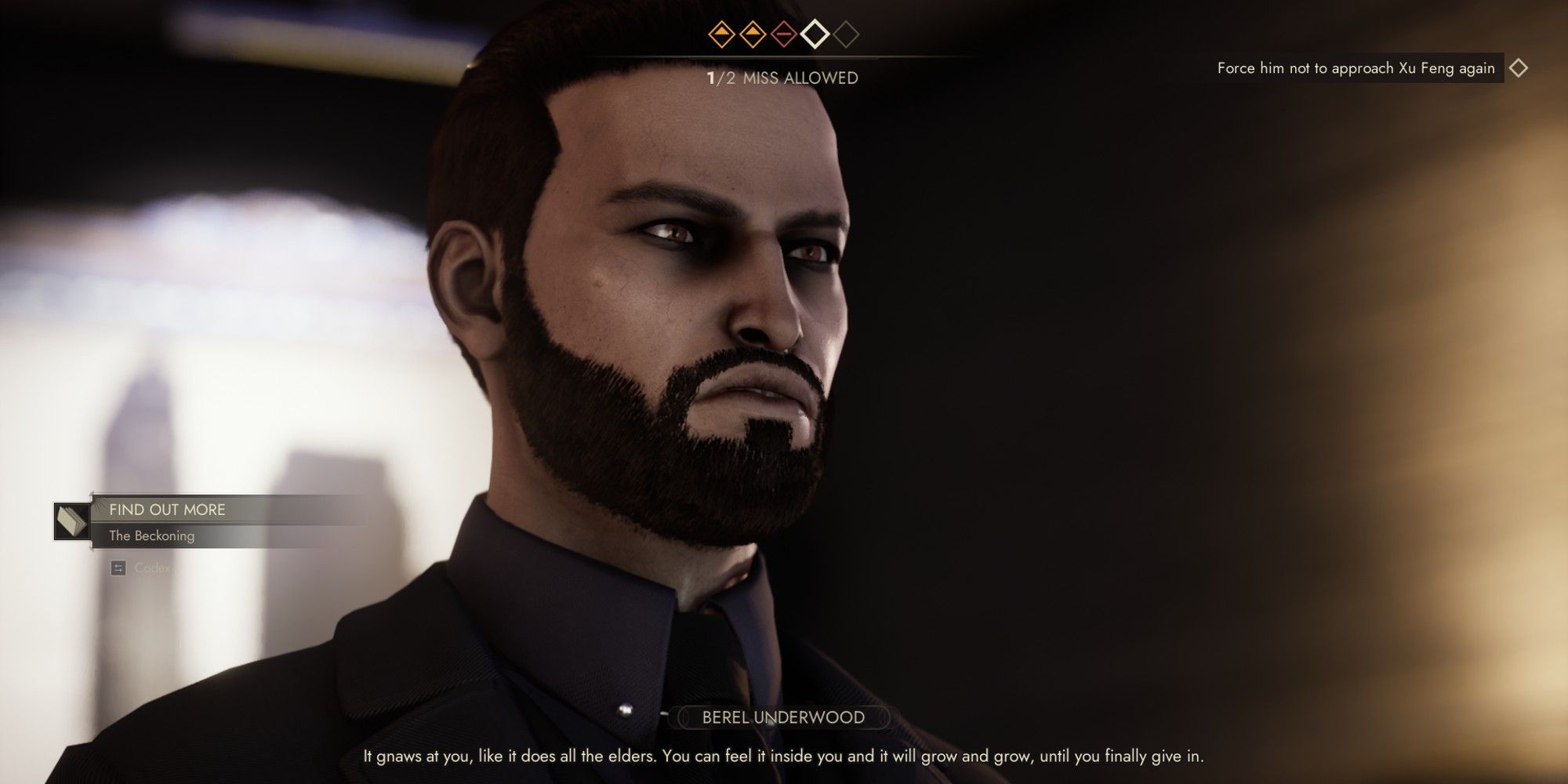 This is what I want from an RPG. I love the genre for a host of reasons. Roleplaying a character is satisfying and, as a writer, I enjoy the opportunity to come up with a backstory and get into a character's head enough to make the decisions I think they would make. I enjoy combat, whether it's turn-based, tactical, or action-packed. But, maybe most of all, I enjoy exploring a world that feels wholly realized. Vampire: The Masquerade – Swansong's basis in a long-running tabletop RPG ensures that the contours of its world are well-established. That history means that, if you have a question, someone has likely asked and answered that question before. Vampire: The Masquerade – Swansong understands that reading a well-made codex is an act of exploration in itself.