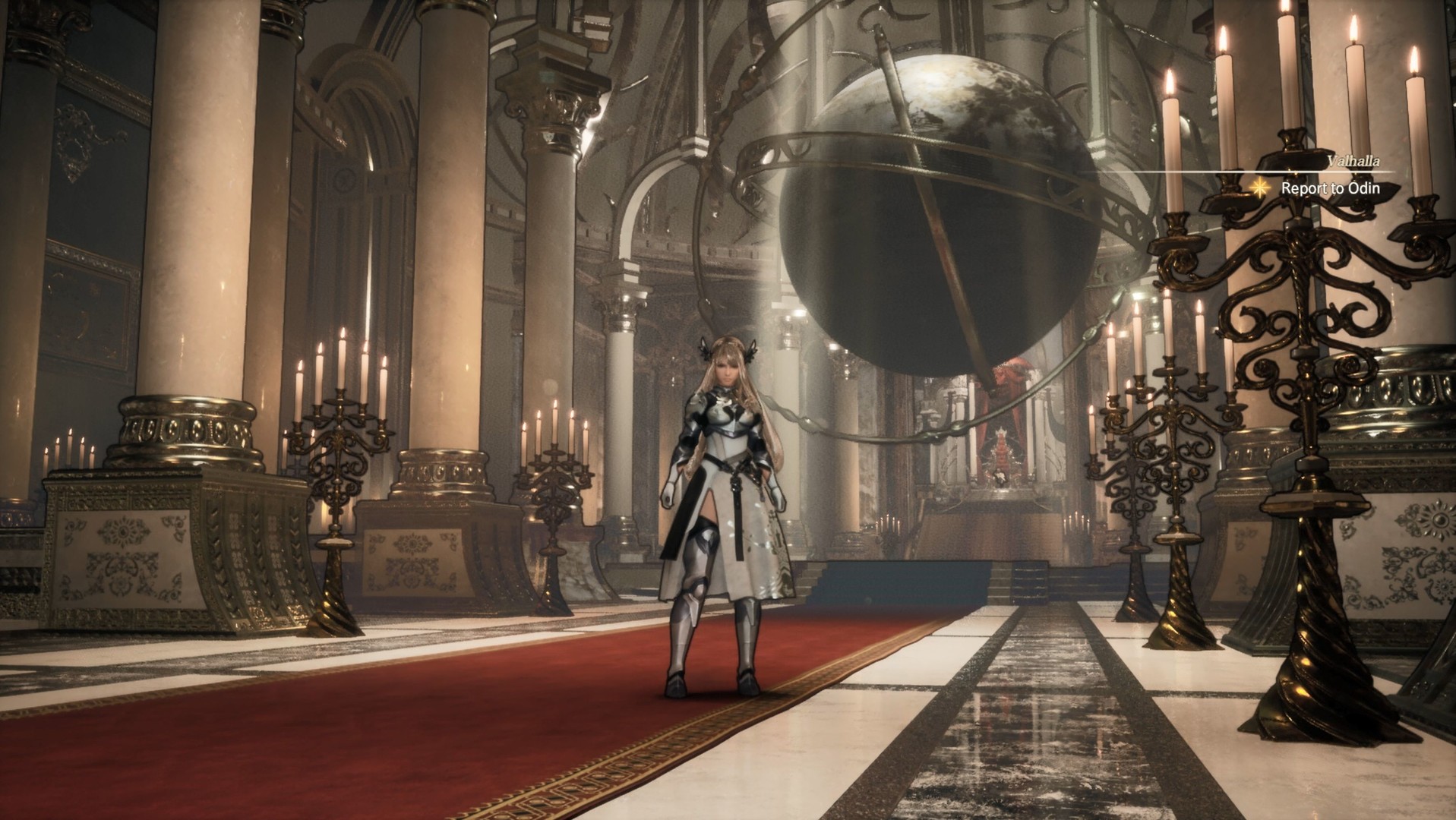 Classic PlayStation role-player Valkyrie Profile returns with a new action orientated sequel set during the twilight of the Norse gods.

Even the most dedicated followers of Japanese role-players may struggle to place the latest instalment of Square Enix’s Valkyrie franchise in a historical context. Its first entry, Valkyrie Profile, arrived as long ago as 1999, and was notable for combining role-playing sensibilities and gameplay with an element of platforming, in a 2D side-scrolling, turn-based setting.

It was a minor hit on the original PlayStation, but subsequent sequels failed to make any impact and the announcement of a fourth console entry was something of a surprise. Valkyrie Elysium is an almost entirely different beast though, a modern action role-player rendered in fairly winsome 3D, with its combat enacted purely in real-time.

It retains a narrative thread from its predecessors, however, remaining thoroughly rooted in Norse mythology (despite Elysium being a concept of the afterlife from Ancient Greece). However, whereas previous Valkyrie games examined the burgeoning war between gods and men, Valkyrie Elysium plunges you into a world devastated by war: Asgard, Midgard, and Niflheim are now ruined and all but empty of inhabitants.

In Asgard, Odin has managed to survive the war but is in a very bad way, so he uses what strength he retains to create you, a semi-divine Valkyrie whose mission is to purify the tainted souls that haunt Midgard (manifesting in true Japanese role-playing style as demon-like enemies and bosses). As you do that, Odin slowly regains his strength and powers, and sets about restoring the land to its pre-war state. It’s a classic premise: the salvation of the entire world depends on you.

In practice, Valkyrie Elysium plays like a typical modern, melee-focused role-player: you’re rewarded for stringing combos together (aided by a grapple-like move, called a soul chain, which pulls you close to enemies), which adds a welcome hint of games like Bayonetta and Devil May Cry. As you progress, you acquire a band of einherjar, spectral warriors with different skills you can summon to help you.

The einherjar were an important element from Valkyrie Profile and Elysium also tries to maintain gameplay continuity with the original by having a modicum of platforming, in which you can use your einherjar to solve traversal puzzles by, for example, generating ice platforms or smashing rocks blocking your way.

Valkyrie Elysium keeps its role-playing elements commendably simple, with just three skill trees – Attack, Defend, and Support – the currency for which is the array of differently-coloured crystals you earn by defeating enemies, and find in chests.

You also acquire powerful magic attacks, known as divine arts; you can equip four of them at a time, although you quickly accumulate many more. Much of Valkyrie Elysium’s tactical depth derives from picking the correct divine arts for the moment, especially during its challenging, and usually very satisfying, boss battles.

Every enemy you encounter has an elemental weakness, so if you hit them repeatedly with a divine art which exploits that weakness, you will reduce them to a staggered state, at which point you can send in your einherjar, pile in yourself, and wreak a vast amount of damage. Each einherjar also has an elemental affiliation, rendering them most effective against particular types of enemies.

It may sound complicated but in practice it isn’t, and that’s one of Valkyrie Elysium’s strengths: even though it’s recognisably a Japanese role-player, you never find yourself scratching your head trying to work out what you need to do to defeat a seemingly unassailable boss. In general, its combat system is very good, again because it has a simplicity and intuitiveness to it.

Valkyrie Elysium also contains plenty of the quirkiness – often leaning towards downright weirdness — reminiscent of much older Square Enix titles. Your character can, for example, glean little snippets about the lives of Midgard’s inhabitants by picking flowers, while she also comes across ghostly trees composed of dead souls which she must purify before any nearby monsters can destroy them.

There are side missions, too, which cleverly reuse previously visited levels, although they are somewhat few and far between. Luckily, you never really need to level grind, which is refreshing for the genre. Instead, there’s just about enough variety among the missions you perform to keep proceedings from becoming repetitive, but it’s a fairly close run thing.

There is a more glaring problem than the repetition and that’s that while you get plenty of back story about what happened to render Asgard so bleak and empty of humanity, the actual ongoing storyline, delivered in cut scenes, is very drab. Your character is a complete cipher, bordering on religious zealot, and while her einherjar, and other recurring characters such as Hilde the evil Valkyrie, strive to inject a modicum of levity into proceedings, the dialogue never rises above the wooden.

Valkyrie Elysium is impressively playable: it’s responsive, has surprisingly decent graphics, and there’s an interesting tactical edge. Plus, it adds replayability via a number of potential story endings, any one of which takes around 30 hours to see.

That said, there‘s a curious emptiness at the game’s heart; you spend a lot of time in its earlier stages wandering around huge, open levels which have whole areas that are completely devoid of humanity and simply throw mindless enemies at you. It leaves you wishing that your character had some sort of internal dialogue to generate a bit of narrative interaction, as otherwise the game can feel very clinical and unengaging.

Valkyrie Elysium certainly won’t go down as a classic, but it still has something to offer those who love Japanese role-players. Its simplicity also makes it a decent entry point for those who usually shy away from the genre, although they should bear in mind that it doesn’t deliver the narrative richness that we have now come to expect from other examples of the genre.

It’s good to see the Valkyrie franchise return, with the ending hinting at yet another sequel to come. With Elysium it has just about dragged itself into the 21st century but we can only hope that Square Enix pays more attention to the storyline and characterisation next time around.

In Short: An occasionally inspired attempt to reinvent the Valkyrie Profile series, but a weak narrative and a dispiritingly empty game world drain the enjoyment from what could’ve been a fun action role-player.

Cons: Unimpressive and unengaging narrative, with wooden dialogue. Too few side missions and too little variety in general, with not enough to do beyond just fighting.