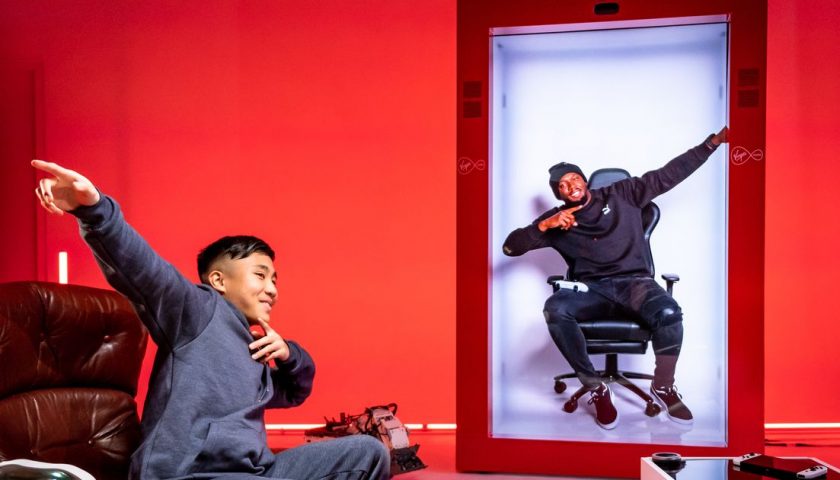 Usain Bolt surprised a mega fan by turning up to play computer games with him in real time – as a 4K hologram projection.

The iconic eight-time Olympic gold medallist was beamed in from a top-secret location to “meet” 16-year-old superfan Alex Jianroran.

Not only did Alex get to talk to the world’s fastest man, but the London local ended up challenging him to a couple of hotly contested football matches on a games console.

And the former sprinter, who holds the world record times for the fastest 100m and 200m races, even hailed victory with his trademark “the Bolt” celebration.

It took place at an event showcasing the “living room of the future”, which was created by Virgin Media O2 to launch its gigabit broadband service, now available to 15.5 million homes across the UK.

The space-age living room was kitted out with a host of tech, including laser TVs and remote-controlled pop-out drawers – all connected by gigabit broadband.

It was developed with the aim of showing how videogaming online with others will be more interactive and sociable in the future – rather than simply talking using a headset.

Usain Bolt said: “I had a great time virtually meeting and gaming with my superfan, Alex, and it’s exciting to see how gigabit-broadband makes futuristic tech like holograms possible.”

The life-long supporter of the Hampshire-based side got to enjoy an online football gaming contest against her heroes.

The hologram-featuring gaming sessions follow research of 2,000 gamers, which identified which celeb they’d most like to play against.

Manchester United star Cristiano Ronaldo topped the list with a third of the vote, while David Beckham (30 percent) came in a close second, and Lionel Messi (28 percent) in third.

Amusingly, nearly a fifth (18 percent) fancied their chances taking on current Prime Minister Boris Johnson – with the same number keen to thrash it out with Donald Trump.

Carried out via OnePoll, the study found a fifth of those polled play videogames at least four days a week – racking up an average of 11 hours a week.

And six in ten said playing games online with pals is their favoured way of socialising – while 40 percent admitted they’d prefer to game against friends via hologram than in person.

Jeanie York, of Virgin Media O2, said: “This incredible hologram technology, brought to life by the world’s fastest man Usain Bolt and Southampton FC players, shows just how far we have come in how we can engage, communicate and socialise in a virtual world.”