What would you risk to acquire a PS5? If you said your position as a high ranking soldier at the United States Space Force, then let this story be a word of warning to you. As spotted on the Facebook page “Air Force amn/nco/snco,” one soldier of the USSF was demoted for arriving 30 minutes late to fitness training because his search for a PS5 took priority.

The unnamed soldier was contacted by his superior officer to appear for training and the soldier responded with, “Yolo, PS5 > letters of discipline.” It seems he did eventually show up, where he was likely demoted on sight. In the letter posted to the Facebook page, the citation reads, “You were late to work and insinuated to your supervisor that buying a PlayStation was more important to you than the disciplinary consequences of your actions.” Sounds about right.

Now, there’s a chance this letter is a complete fabrication. That’s where the website Task & Purpose comes in. After spotting the humorous story online, the publication reached out to Space Delta 8 to see if they could verify the authenticity of the letter. A spokesperson could not confirm if the letter was real, but did note that it matches the official formatting for Space Force. 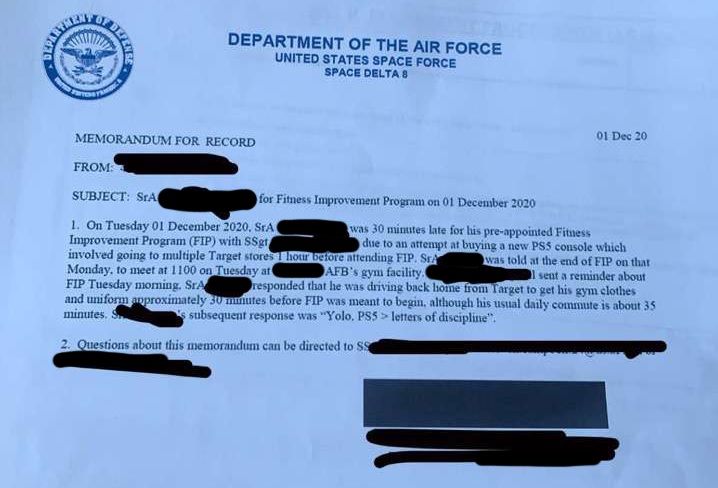 “Members who fail to adhere to the Space Force’s expectations,” Space Force representative Meaghan Dorroh stated, “and standards are held accountable by their respective leadership with the goals of reforming behavior and maintaining good order and discipline.” That’s maybe not a direct confirmation, but it is starting to sound more and more likely that this story is accurate.

Considering the USSF does have a history of competing professionally in Call of Duty, maybe this one soldier thought it was his duty to acquire a PS5 and get to practicing. Just a day before this letter surfaced, the USSF won the second annual Call of Duty Endowment Bowl against other branches of the US armed forces. All of the pieces are falling into place.

I can’t say that I’d risk anything to acquire a console, especially since stock will stabilize in a few months once silicon production is able to ramp up again. I suppose you’ve gotta do what you’ve gotta do, though.