Uber is launching its monthly Uber Pass subscription service across the U.S., following an extended test period in a handful of cities.

The ride-hailing giant first debuted a service called Ride Pass back in 2018, allowing riders to pay $15 per month to lock in a set price for any ride they take. This was initially available in Los Angeles, Miami, Denver, Austin, and Orlando and Uber has since played around with versions of the subscription in different markets. This culminated last year in the all-encompassing Uber Pass that offers discounts on rides, food delivery, and micromobility (bikes and scooters).

During its test phase, Uber Pass was available in 10 U.S. cities, and today it’s rolling out to more than 200, including New York City, Seattle, Portland, St. Louis, Honolulu, Madison, Milwaukee, and Nashville.

Uber Pass is not available in California, which may reflect the company’s escalating spat with local authorities over how it classifies drivers as independent contractors. Assembly Bill 5 (AB5) is a new California state law that requires a company to classify workers as employees if it exerts control over how they do their jobs or the work constitutes part of the person’s normal business. The ongoing dispute is currently reaching the final stages of the appeals process, and Uber has threatened to shutter its ride-hailing business in California if the court’s previous ruling is enforced.

Uber has also settled on a final iteration of its monthly subscription. For $25 per month, customers get 10% off UberX, XL, and Comfort rides and 15% off Black, SUV, and Premier rides. They also get 5% off Uber Eats orders over $15 and free delivery.

Uber has also been expanding deeper into grocery deliveries via its acquisition of Latin American startup Cornershop, though this is still in the very early stages of rolling out in the U.S. But an Uber Pass will get subscribers free delivery on grocery orders over $40. 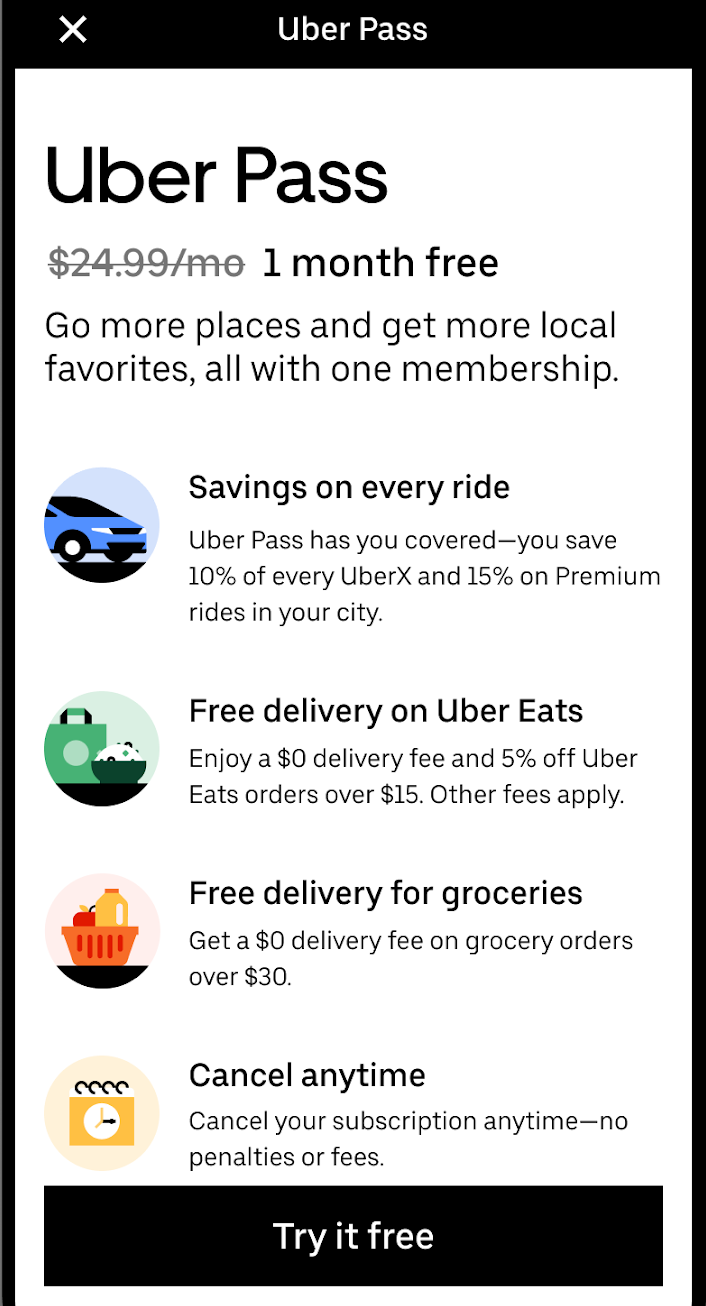 Uber appears to have removed Uber Pool from the monthly plan, and it no longer offers free Jump bikes and scooters rides of up to 30 minutes a day. Given that ride-sharing is not currently advised due to social distancing measures and Uber transferred ownership of Jump to Lime back in May, it probably makes sense that these are no longer part of the Uber Pass plan.

A monthly subscription is designed to encourage customer loyalty, and both Uber and Lyft have dabbled with various plans in the past. The best way to keep someone from straying to a rival service is to get them to pay a fee upfront with the promise of saving money overall. This should also encourage people to use services more frequently, which is particularly important for Uber as it tries to recover from the impact of COVID-19.

Uber also announced today that it’s rolling out its redesigned app, which houses all its services under one roof, to millions more people over the coming weeks, after several months of testing.