Twitch Partner Jenna is under fire after leaked Discord logs show a pattern of racist, sexist, homophobic, and anti-semitic slurs being written by the streamer.

Jenna is making headlines around the world, although it’s for all the wrong reasons. The Twitch Partner is coming under intense scrutiny for leaked Discord chat logs that appeared on Reddit, and they’re full of horrific language that you wouldn’t expect to hear from a sanctioned Twitch streamer.

The post appeared on Reddit yesterday and revealed a pattern of homophobic, racist, sexist, and anti-semitic comments from Jenna. Some of it gets so bad you’d think you had accidentally stumbled into an 8chan (now 8kun) message board. 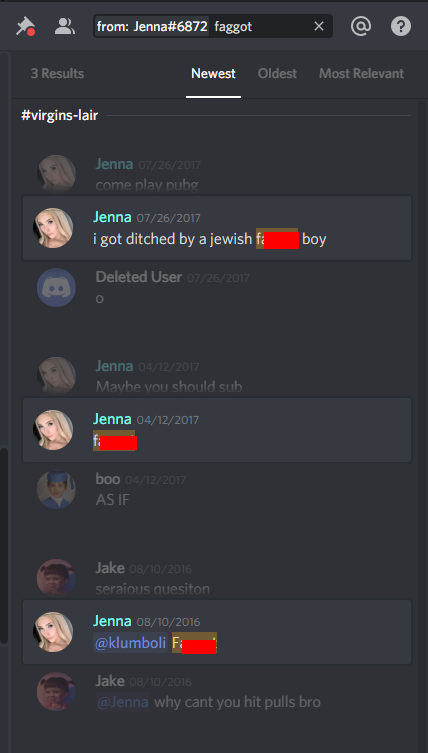 Liberal use of the homophobic slurs can be seen throughout the log, while any criticism of her language is often met with accusations of being a “snowflake.” At one point, she engages in an exchange where she seems to complain about the fact “all her stalkers are brown.” Later, she responds to criticism with: “I don’t give a s#!% about it being racist.”

At times, discussions seem to border on white supremacy.

Luckily for us, Jenna was actually streaming when the Reddit post went live and we get to see her panicked reaction as she realizes that the racist cat is out of the bag. After a few moments of shaking she then feigns amnesia saying, “Honestly, I don’t remember any of this.”

A later clip shows Jennea repeating herself, but then admits that if she loses her Twitch partnership, “I deserve it.”

And she would. Various Twitch personalities have received bans for much less.

This isn’t the first time Jenna has come under fire. A Reddit post from earlier this month revealed a streamed admission of sexually assaulting another man when she was 17. After initially being rejected, she threatened to roast him on her Twitch channel for not kissing her. He then relented, with Jenna saying that she “got my way.”

Twitch has yet to comment on the growing fiasco, but various Redditors are calling for her Twitch channel to be taken down. We wouldn’t be surprised to see her channel and Discord servers banned in the coming days.