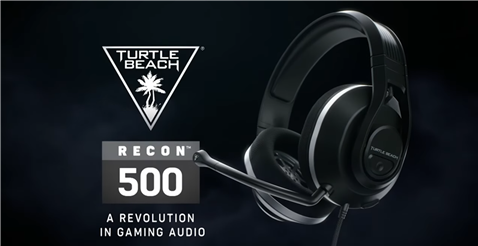 Turtle Beach needs no introduction – anyone who played console shooters growing up probably got a pair or two as a gift. That niche of good quality at a small-to-medium price is what Turtle Beach is known for, and it lives in that market comfortably. Its Roccat brand targets higher end PC headsets so that Turtle Beach can stay in the console lane. And stay firmly in that lane it does with the Recon 500.

We’ve gotten so used to reading that playing it safe is a bad or boring thing (especially in the gaming industry), but in the Recon 500’s case it works. As a no-frills wired headset, it works with Xbox One, Xbox Series X|S, PS4, PS5, Nintendo Switch, and even PC if you really want it to. The microphone is detachable, and the frame has only two features: a knob for output volume and a button on the left earcup for muting the mic.

The design is nothing innovative, but that also means it’s as reasonably comfortable and functional as previous Turtle Beach headsets. The mesh earcups fit well enough and keep decently cool. They also come with that whole “glasses friendly” design that I’ve been seeing more of, and appreciate, on gaming headsets. I was surprised to find that they were much better at noise cancellation than I was expecting.

The Recon 500 also surprises in delivering very full sound. It uses 60mm dual drivers, which is uncommon of gaming headsets at this price. The drivers work to give a thorough bass sound, though, without any cracking or static when I fiddled with the volume. It misses some of the details of more costly sets, but that’s to be expected. This headset works where it matters – it produces the rumbling explosions of shooters and evoking orchestral sweeps of story-driven games.

On a very minor note, I personally enjoy the two options chosen for colors. There’s basic black and Arctic Camo, which is what I got. Not only does it stand out among the row of black headsets on my desk, but it takes me back to the Xbox 360 days, before every peripheral tried to incorporate RGB.

At a surprising $80, the Turtle Beach Recon 500 offers booming bass in a nostalgic design. Or maybe it’s less referential and more that Turtle Beach’s form factor has been constant for a long time. As the saying goes, if it ain’t broke, don’t fix it.

A Recon 500 was provided for this review. It’s available now from most major electronics retailers and Turtle Beach’s website.