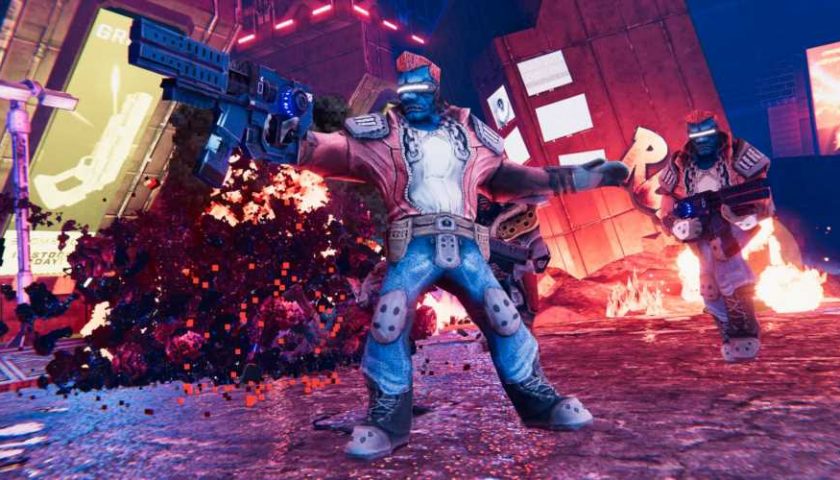 There’s something about Turbo Overkill that makes it so easy to slip into a flow state and just lose yourself to the carnage. The way you effortlessly slide across the wet pavement, chainsaw leg extended, tearing through throngs of cyberdemons, feels like flying. From an outsider’s perspective, I can only imagine that it all looks like frantic chaos, but when you’re in the driver’s seat, running and gunning feels as natural as moving your own body. Ironic, considering your own body is pulled apart and put back together with all kinds of new ways to maim and dismember all throughout Turbo Overkill.

We can’t talk about Turbo Overkill without first talking about Doom 2016 and Doom Eternal. The triple-A reimagining of the Doom series revitalized the entire ‘boomer shooter’ genre, and it’s thanks to the success of those games that players have such an appetite for the sort of high-octane, bloody mayhem in Turbo Overkill. It’s easy, and necessary, to compare these two modern takes on classic shooters, but relying on New Doom to be a yardstick with which to measure Turbo Overkill risks doing a disservice to both games. Rather, it’s more useful to view them as branching paths in the genre. Doom 2016 and Doom Eternal represent an evolution towards complex, puzzle-like combat, while Turbo Overkill refines the core gameplay of Doom and, perhaps to a greater extent, Quake, to offer the fastest, smoothest, best-controlling version of any game like it. It is brilliant in its simplicity and perfect execution.

If learning to work Doom Eternal’s multitude of weapons and abilities is cognitive overload for you, Turbo Overkill should be a refreshing change of pace. You’ve got guns and you get to shoot bad guys. You can jump, you can dash, and you can run on walls. It doesn’t really get much more complicated than that, but luckily that’s plenty to work with. As you progress, you’ll earn a couple of new abilities and the opportunity to buy augments for your body and alternate fire modes for your guns, but there is such a gradual progression and so few mechanics that it never becomes overwhelming. Most of your mental energy is spent mapping the giant levels in your mind so that you can find your way back to a secret chest when you finally get the key. Combat itself is pure instinct, and it feels incredible.

The aforementioned chainsaw leg is your best friend. Sliding accelerates you forward at a ludicrous speed and allows you to charge right through waves of enemies to give yourself space. Eventually you can upgrade the chainsaw to give you health and armor too, so a valid (and entertaining) strategy is to simply slide back and barrage through a crowd until there’s nothing but red smears left on the floor. Your arsenal of shotguns, SMGs, rocket launchers, and miniguns are just as effective and even more satisfying to unload into Turbo Overkill’s bestiary of freaky cyber-monsters.

The cyberpunk setting is definitely the flavor of the week, but Turbo Overkill makes it its own through imaginative character design, fascinating art direction, and vertical levels that often transform in unexpectedly surreal ways. One second you’re looking at pink neon strewn across rain-soaked rooftops and the next you're blasting your way through a synthwave dreamscape. The low-resolution assets contrast with dynamic lighting to create an otherworldly aesthetic. This is exactly how you take a popular style and stretch it until it becomes something new and cool that others will want to imitate.

My only real criticism of Turbo Overkill is how much secret hunting disrupts the action. You’ll miss out on upgrades if you don’t find the secret box and key on each level, and sometimes they’re both incredibly well hidden. As thrilling as it is to rush through each level obliterating everything that stands in your way, things take a turn for the frustrating as soon as you're re-exploring empty stretches in search of missing secrets. As much as it might bother some people, I’d recommend ignoring secrets on your first run just to get the most out of the experience, then replaying the levels to hunt for missing keys. This is the same problem I have with the modern Doom games, for what it’s worth.

Turbo Overkill just launched in Early Access so the story is incomplete, but it’s pretty polished and bug-free, other than the occasional enemy that stops moving before it’s dead. That won’t bother you much, since they don’t tend to live long anyway. Normally I would play a few hours of an Early Access game then set it aside until the full launch, but I just can’t get enough of Turbo Overkill, even when it’s kicking my ass. There’s a free demo available on Steam if you prefer to try before you buy, but trust me: as soon as that chainsaw pops out of your leg and you deliver a flying kick to a dude that look like one of Sid from Toy Story’s cursed action figures, you won’t want to put it down either.