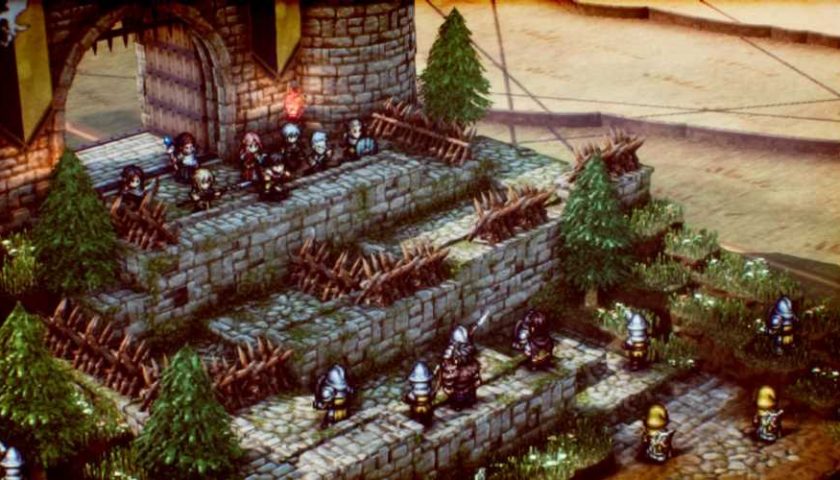 This is the chapter of Triangle Strategy you get if you decide not to agree to Silvio Telliore's proposal in the previous part. Rejecting him, you'll soon uncover Silvio's true colors and be forced to defend Castle Wolffort against a band of Glenbrook Soldiers, including a very tough and renowned opponent.

As always with this game, there are decisions to be made, a battle to be fought, and items to be collected. To make sure that you don't miss a thing, we have the perfect chapter guide!

The bandits from the first chapter of the game, Travis and Trish, discuss the bounty that Aesfrost has put on Roland's head.

Telliore's intentions are revealed, and his army are knocking at Castle Wolffort's gates. Among his soldiers is Rufus "Herosbane" – a name to run away from very quickly to be sure. 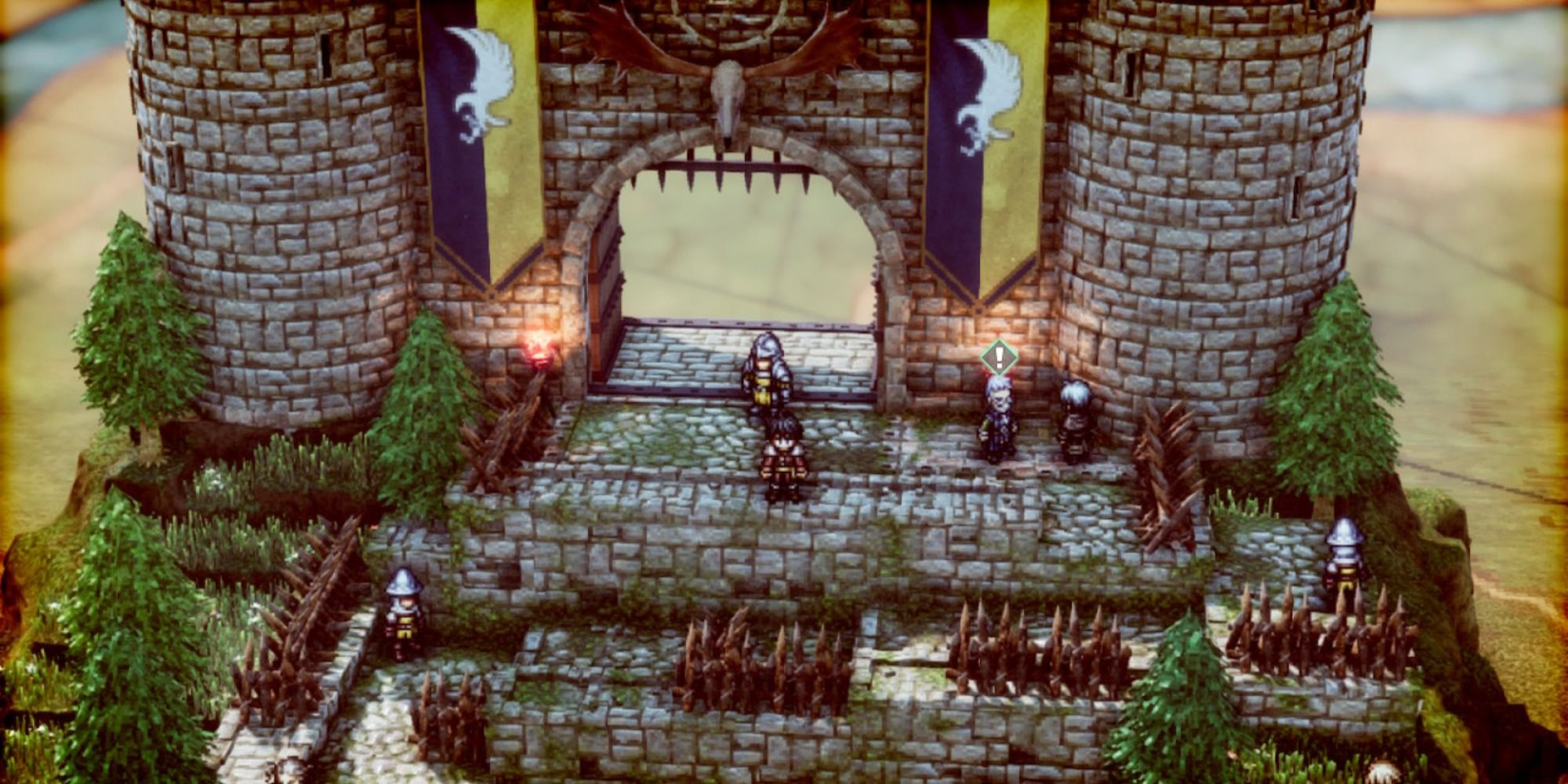 With tensions rising and an army on the way, we have a new map to explore. Here we are at the Wolffort Gates, filled with barricades ready for the encroaching army. As usual, there are things to be picked up and conversations to be had.

Once you have concluded your exploration, there is nothing to do but wait for Telliore to make their move. Prepare for a fight!

Landroi hears of both Telliore's betrayal and the advancing army led by Avlora. It's not a very good day for Lord Landroi. 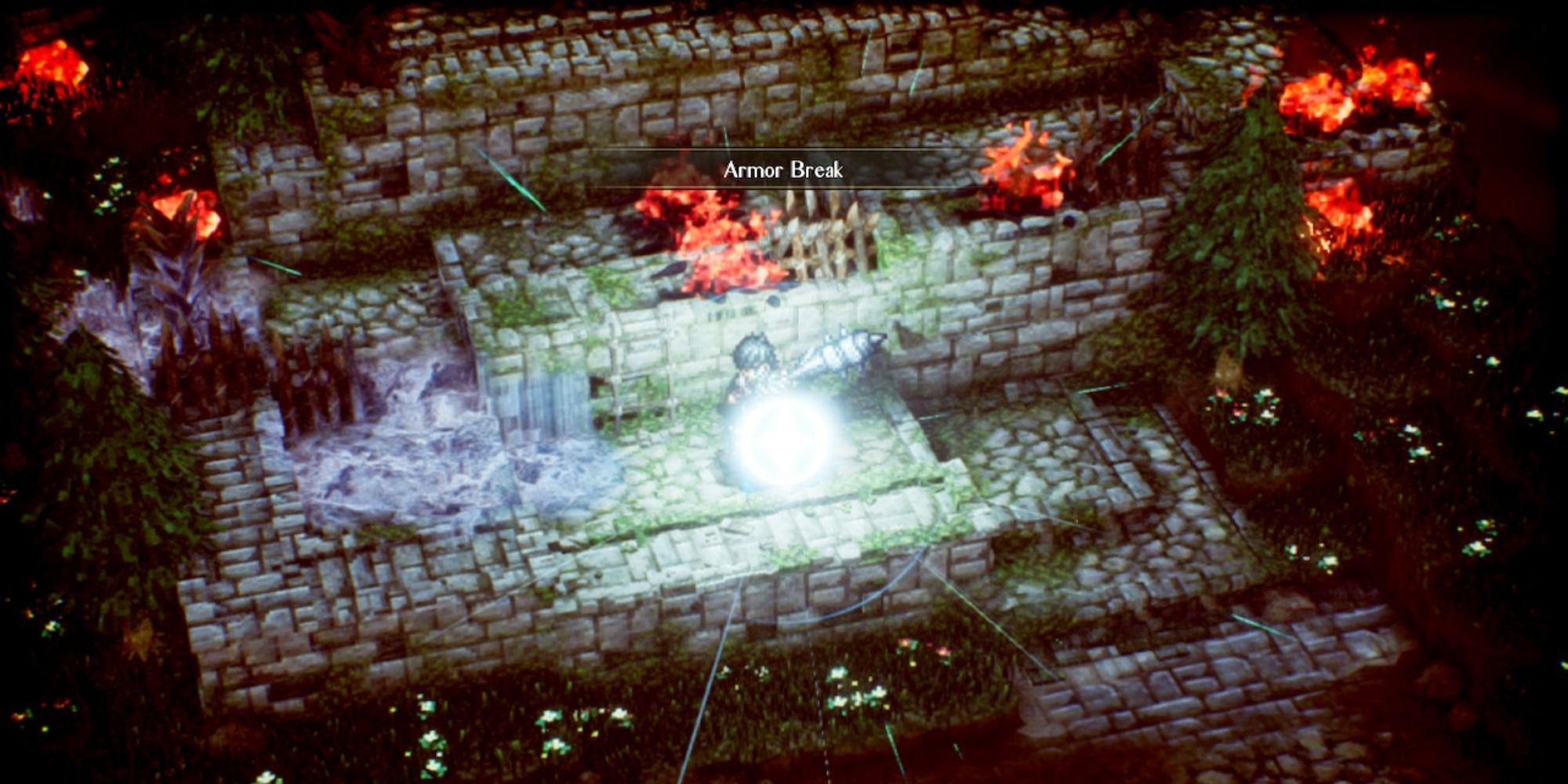 Silvio states that our lofty convictions will not change reality, but he's quite wrong about that. It's time to ward off his forces and cut his treachery down to size. Of course, Silvio himself is too cowardly to fight, but Rufus is a worthy opponent.

As you can imagine, having the height advantage means that your archers will have a fantastic time here. This is a great opportunity for some Kudos farming if you have the patience! 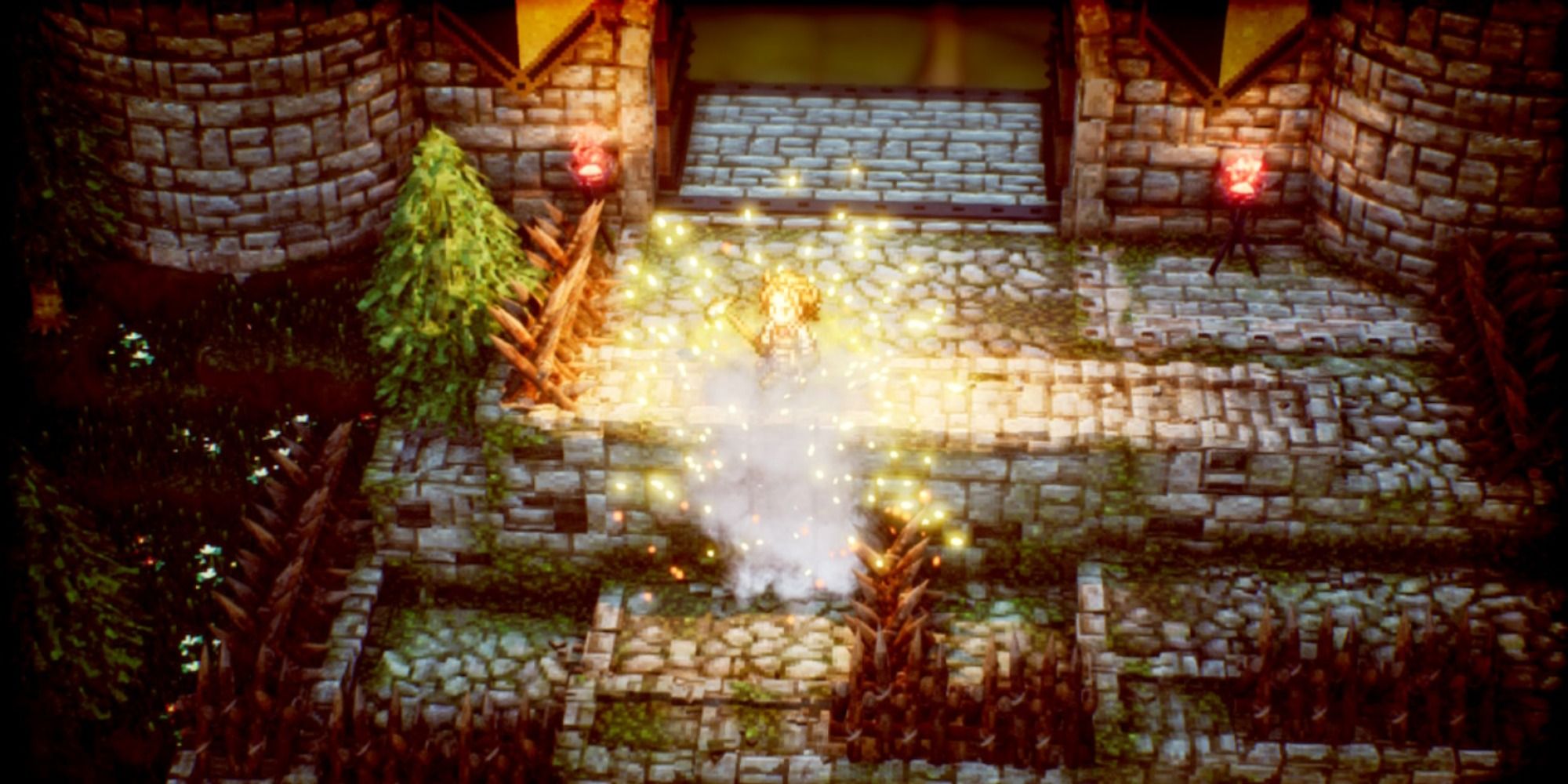 While you start this battle with a fantastic height advantage, this doesn't really mean much for your melee-aligned units.

To expedite their trips down the winding stone staircase, deploy Jens if you have him. His ability to construct ladders wherever you want them will come in very handy. Equip him with a Vanguard Scarf to get a headstart on this strategy.

Be aware that if you try to build a second ladder, the first ladder will disappear. Don't let your units get stuck! 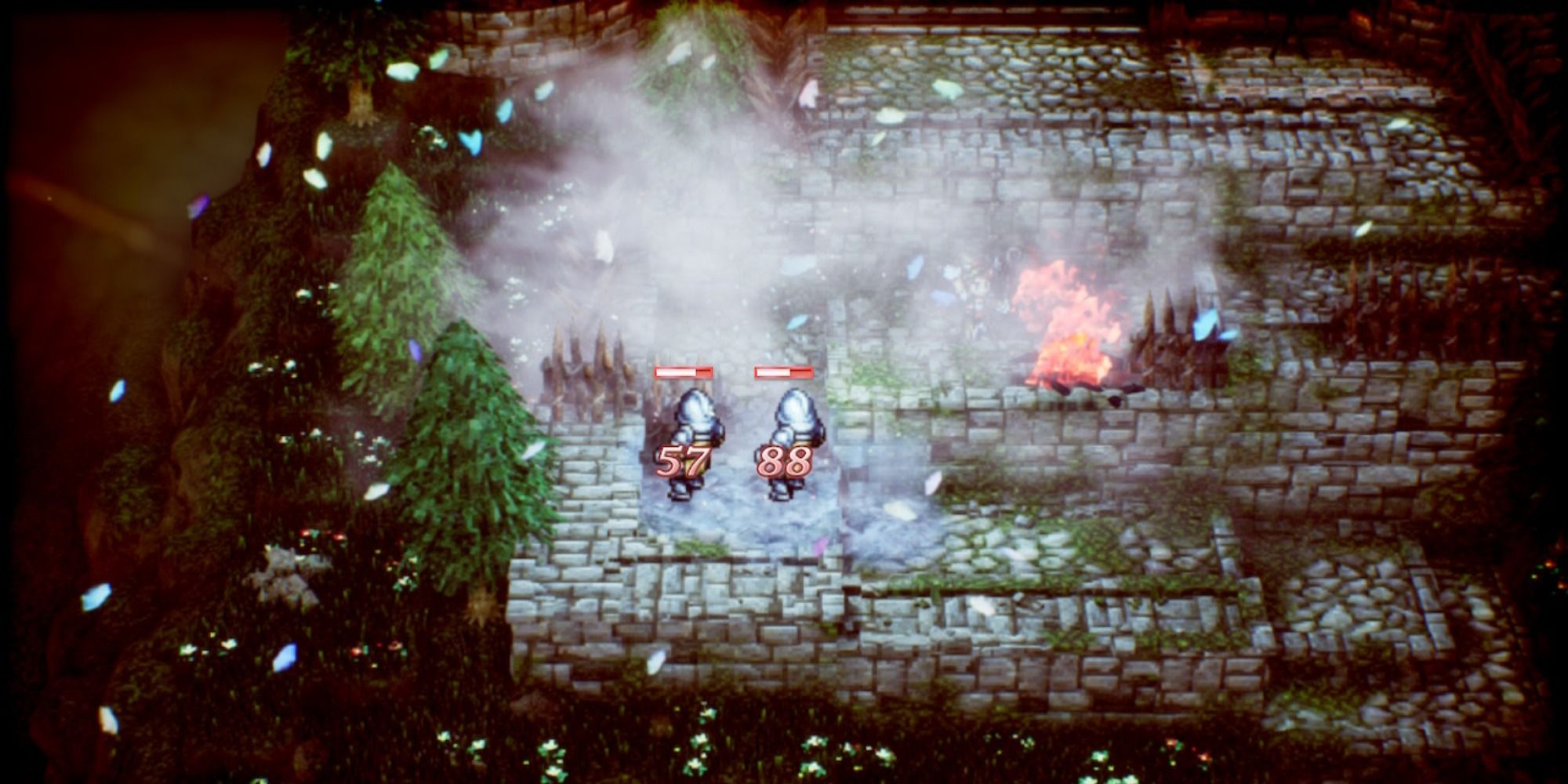 If you have Narve recruited, his Icy Breath spell can be used to great advantage. It'll place icy patches that slow the advance of your foes and deal a ton of damage to the various enemies that are conspicuously weak to the ice element.

In a similar fashion, beware of the Glenbrook Battlemages. They will use Scorch to destroy the wooden barricades instantly and set down dangerous patches of fire. If you can use wind attacks to your advantage, though, this could be their comeuppance. 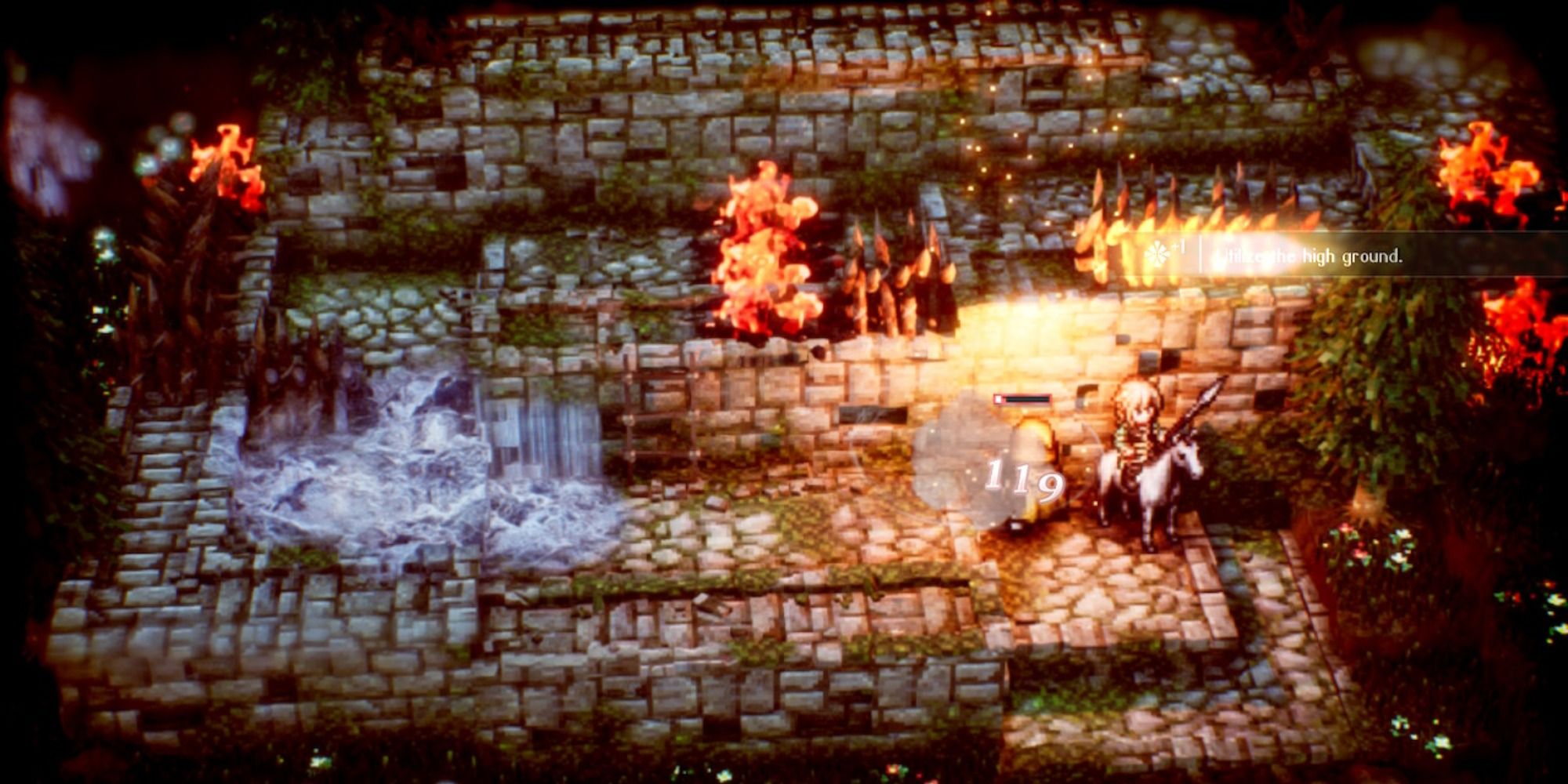 Your main targets in the first rounds of this fight will likely be the Battlemages, Healer, and Bowmen. It's far easier to control the movement of the physical attackers, so deal with the ranged attackers asap.

The Healer is especially important to kill. You don't want him healing Rufus when you've almost managed to finish the brute off. 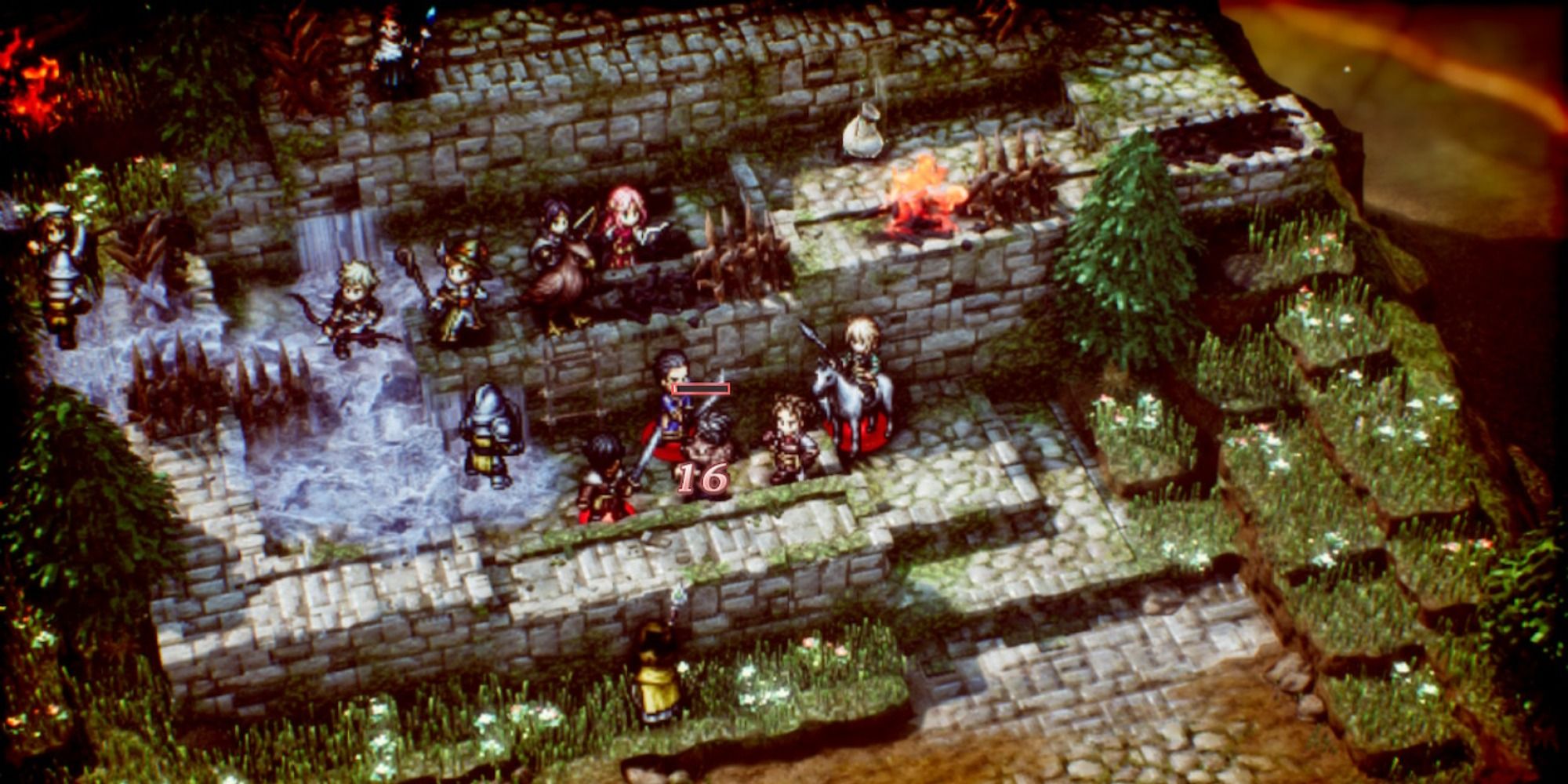 Rufus is a pretty tough customer to deal with and provides a large portion of this battle's difficulty. He has a very high physical damage output and can even use Bolster to give himself some extra TP while increasing his physical attributes. His Armor Break attack is his nastiest tool, though, as it easily deals over 70 damage even to your bulkier units. Take him on with care and caution, and heal up your units whenever necessary.

He has a pretty glaring weakness to magic damage, so Frederica, Narve, and any other magic damage dealers you may have will make themselves useful in taking him down.

One great way to destroy Rufus is to inflict Immobilize on him with Hughette's Shadowstitching Arrow attack. It won't always stick, but if it does, you've secured yourself a significant amount of breathing room to take on other units without fear of his might.

Once you have him down, the battle is over.

With the battle over, Silvio flees with Rufus in pursuit. This ends Part Two of Chapter Eight, Parting Ways. But this is not the end of the chapter. 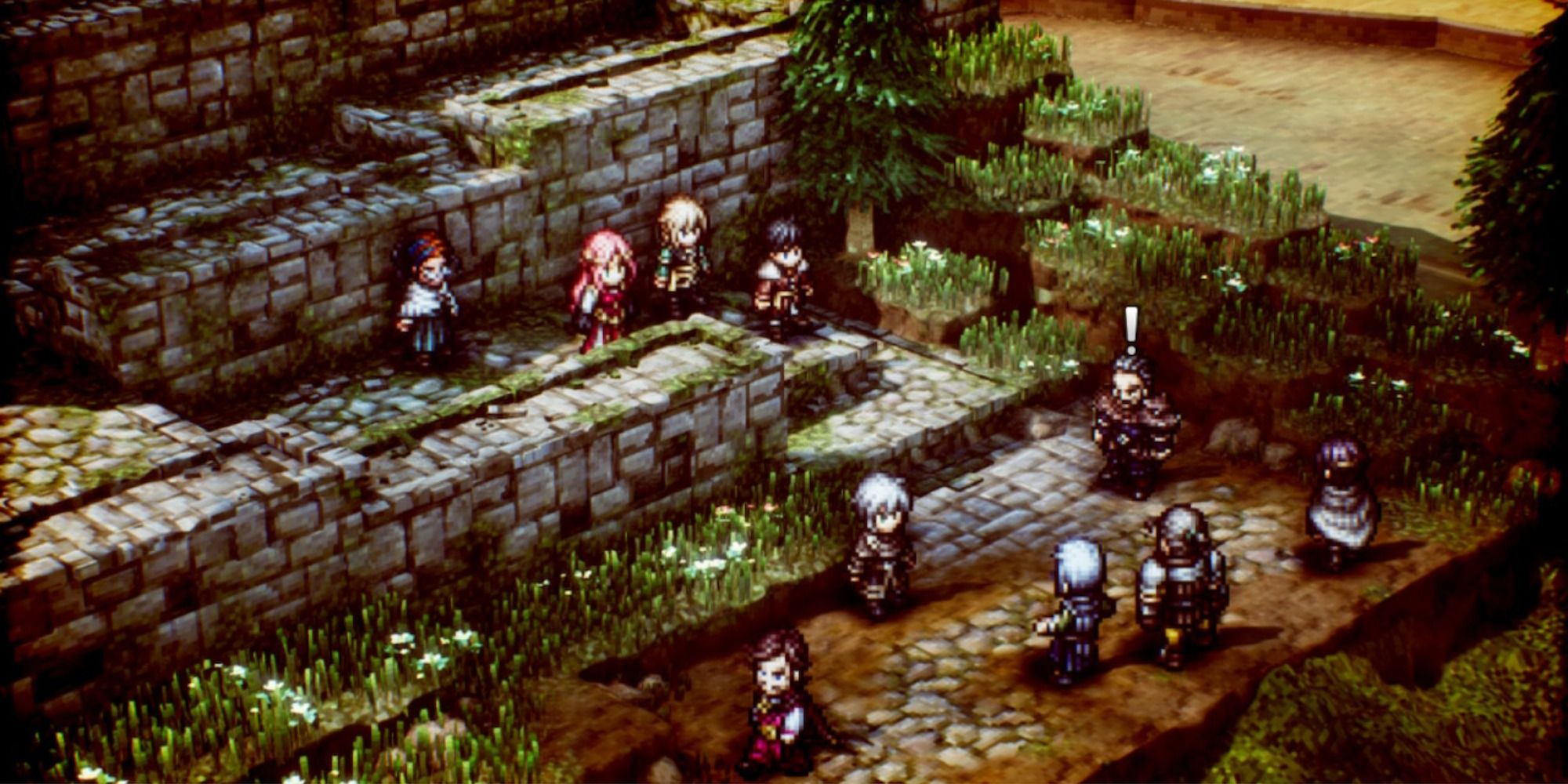 With the spoils of the last battle, now would be a good time to promote one of your favorite units with the Medal of Bravery. In addition, you can upgrade one of your archers' weapons with the Spider Silk. We recommend Hughette, as she's a main character and has amazing versatility thanks to flight.

Side Story: Norzelian Mountains: Base

Desperately trying to flee, Silvio gets caught up to by Rufus. He's already claimed the Herosbane moniker, will he claim Ratsbane, too?

Avlora faces off against Landroi, a man who she respects but finds herself opposing on the field of battle.

Gustadolph congratulates Avlora on her victory – finally – and then plans his next move.

Roland gets Benedict to go along with a plan that will shake up the political state of the country.

Travis and Trish come across an unlikely discovery, with Roland's plan falling directly into place.