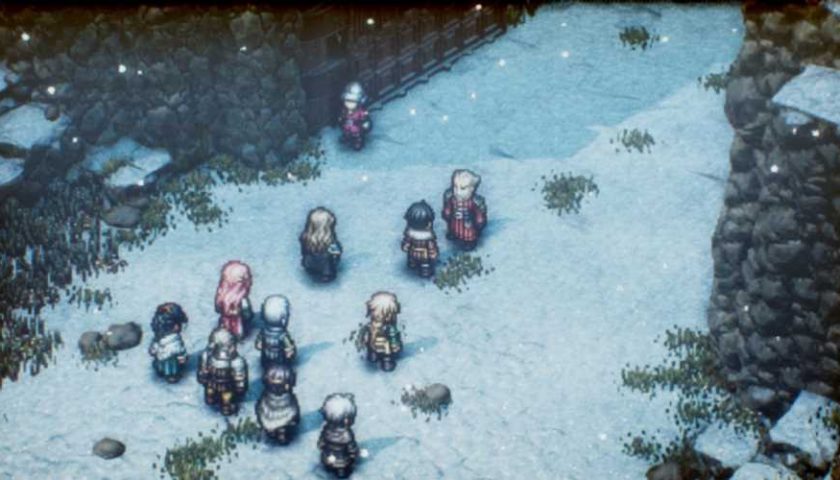 After taking part in your first momentous vote in Triangle Strategy, you will be taken to either the Grand Duchy of Aesfrost or the Holy State of Hyzante. With the former route, Serenoa and co. get to see the chilly north for the first time in the game and meet Archduke Gustadolph.

With a large exploration event and a pretty difficult battle to contend with, this route can be a challenge. Luckily, it also comes with a nice reward – the ex-salt smuggler Rudolph, who makes for a fine addition to the team.

Cordelia and Prince Frani discuss where Roland has got to.

This scene has Serenoa and co. finally reaching Aesfrost and meeting Archduke Gustadolph, who will ask him a question in short order.

After the political discussion that follows, you will be treated to an introduction to the seedy underbelly on Aesfrost's salt-smuggling scene. It's here that we meet the next recruitable character. 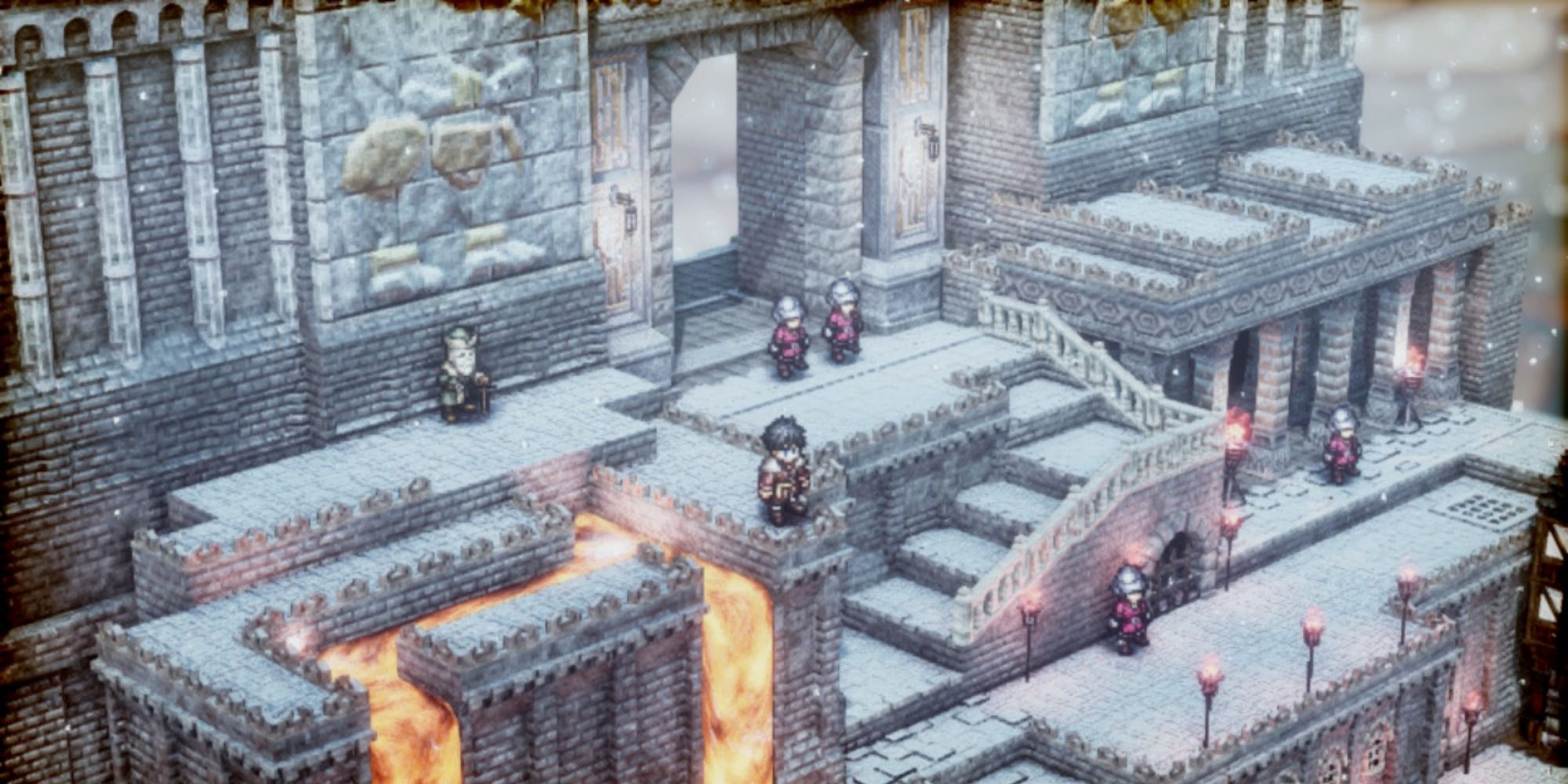 Having agreed to help Sycras with the sting operation, you now have all of Central Aesfrost to explore. As always, there are items and tidbits of info to pick up, and a few conversations that lead to Conviction boosts – the NPCs that give these have exclamation marks above them.

This is also the first exploration event that you'll experience that features a merchant. These offer time-limited shops that may sometimes offer exclusive items. If you want something and do not currently have the Coins for it, you can partake in Mental Mock Battles in the Encampment to earn some. This can be done even during an exploration event.

To get inside the Aesfrosti Archives, speak to the guard in purple standing outside them.

Of these items, it may be worth grabbing a Thunderstone or two for the upcoming battle. Upgrade materials are always worth getting too since they can be frustrating to farm.

Once you've finished your exploration, end the event and get ready for this chapter's battle. 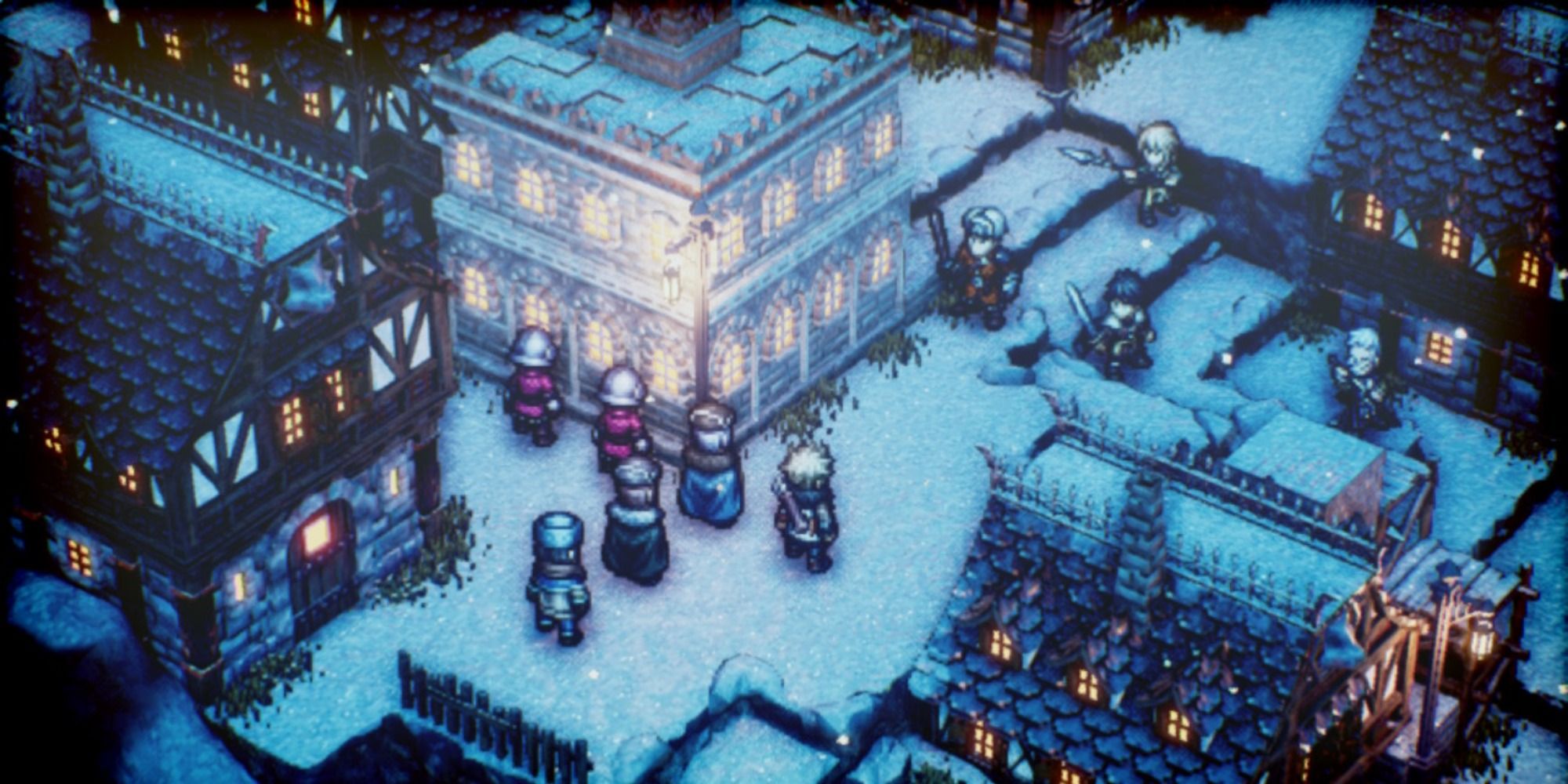 As you could have imagined, the operation doesn't exactly go as initially planned. Your foes are some traitorous Aesfrosti soldiers and you have some new allies for the fight.

This is the first mandatory battle wherein you will have Recommended units. These units are considered particularly useful by the game for the current battle. Including all of them in your battle party will not only give you an edge but will net you some Utility points. Conversely, if you use none of them, you'll get some Liberty points.

With an enemy force of 12 units, you sure have your work cut out for you. To balance the scales, you'll also have Rudolph and Sycrus on your side. Rudolph is an archer like Hughette, but prefers to get closer to his targets. Sycrus is a beefy Staffwielder with the Cheer ability, which grants them TP and buffs their strength for a few turns.

You will be able to control Rudolph's actions, but Sycrus will be controlled by the AI. 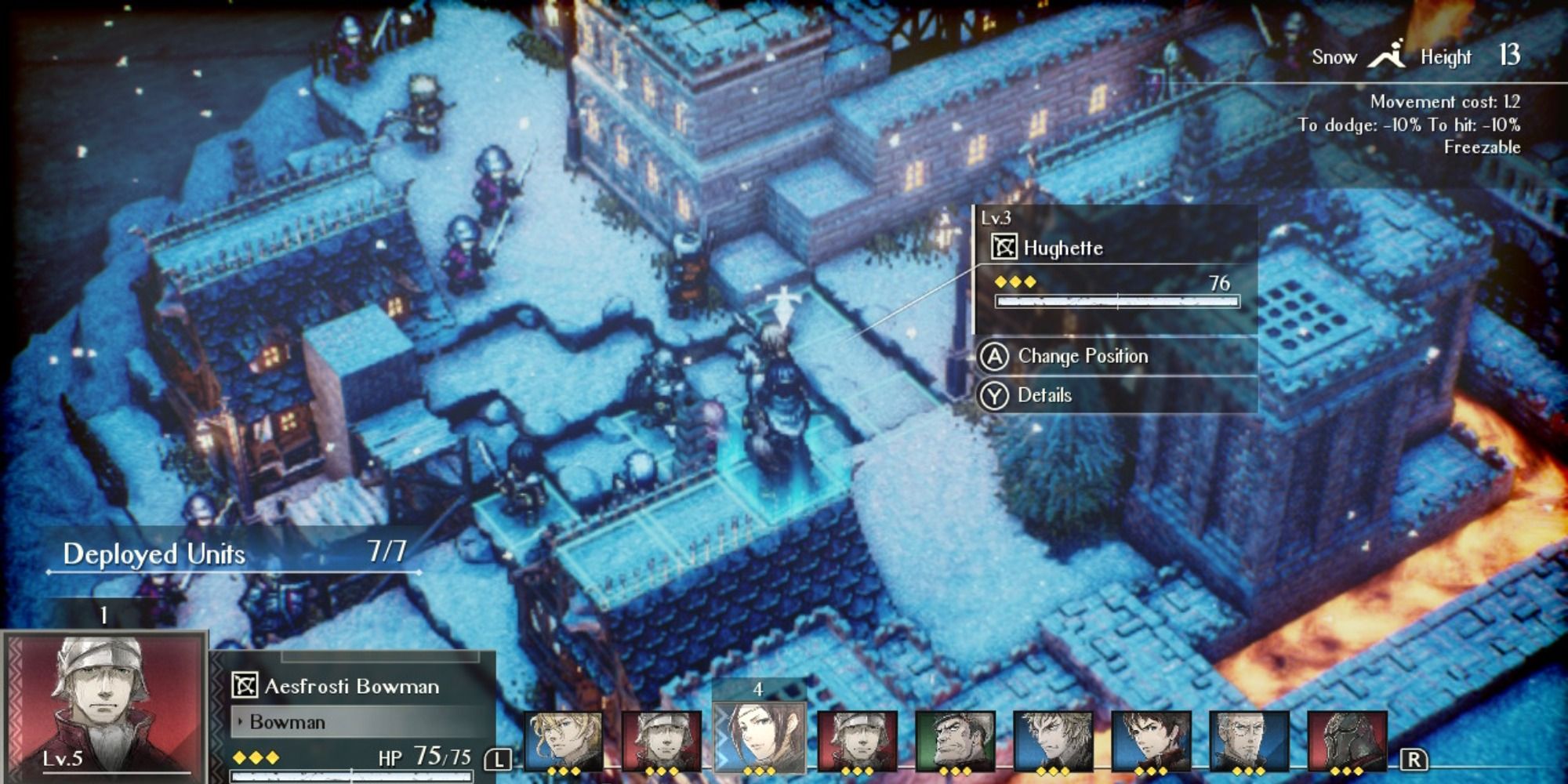 At this point in the game, you will have eight units. With only seven deployment slots, you have to decide who gets left out of the battle. If you're insistent on having all three Recommended units on the field, Anna might be the best choice to keep on the benches. If not, Benedict doesn't contribute all that much and is a decent unit to leave.

As far as placement goes, put Erador on the tile closest to Rudolph so he can quickly go take the heat from the surrounding soldiers with Provoke, and get Hughette up on the roof of the nearby building. Her arrows will deal extra damage from this vantage point. 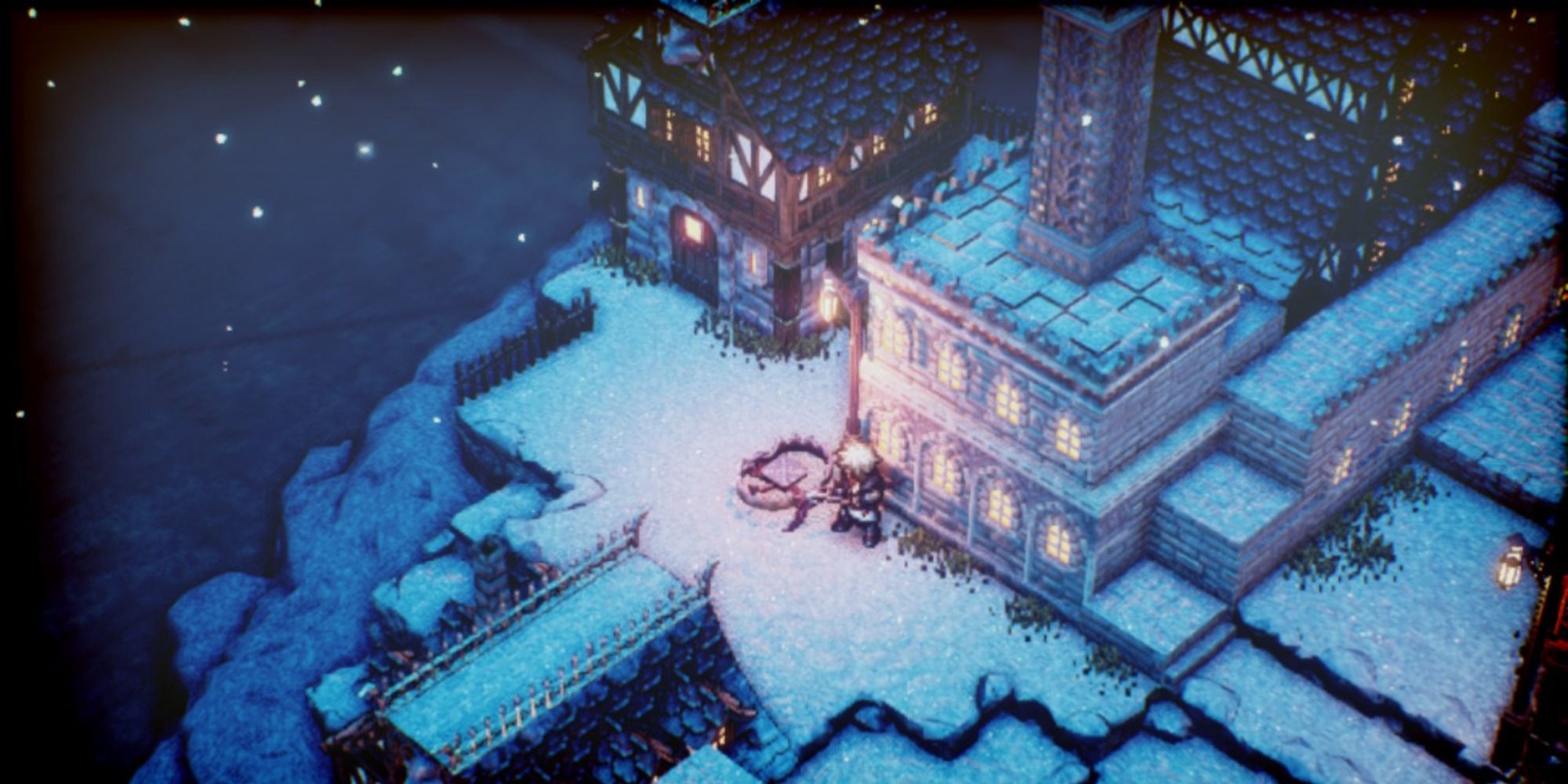 Rudolph is a pretty great asset to have in this battle, and a good unit overall. You'll want to be using his Straight Shot skill to make large dents in healthy enemies, and picking off weakened enemies with normal attacks.

He can also set Steel Traps which will trigger as soon as an enemy walks over it, dealing damage and wasting their turn. Use this more to interrupt enemy turns more than to deal damage – you want all the momentum you can get in battles where you are outnumbered. 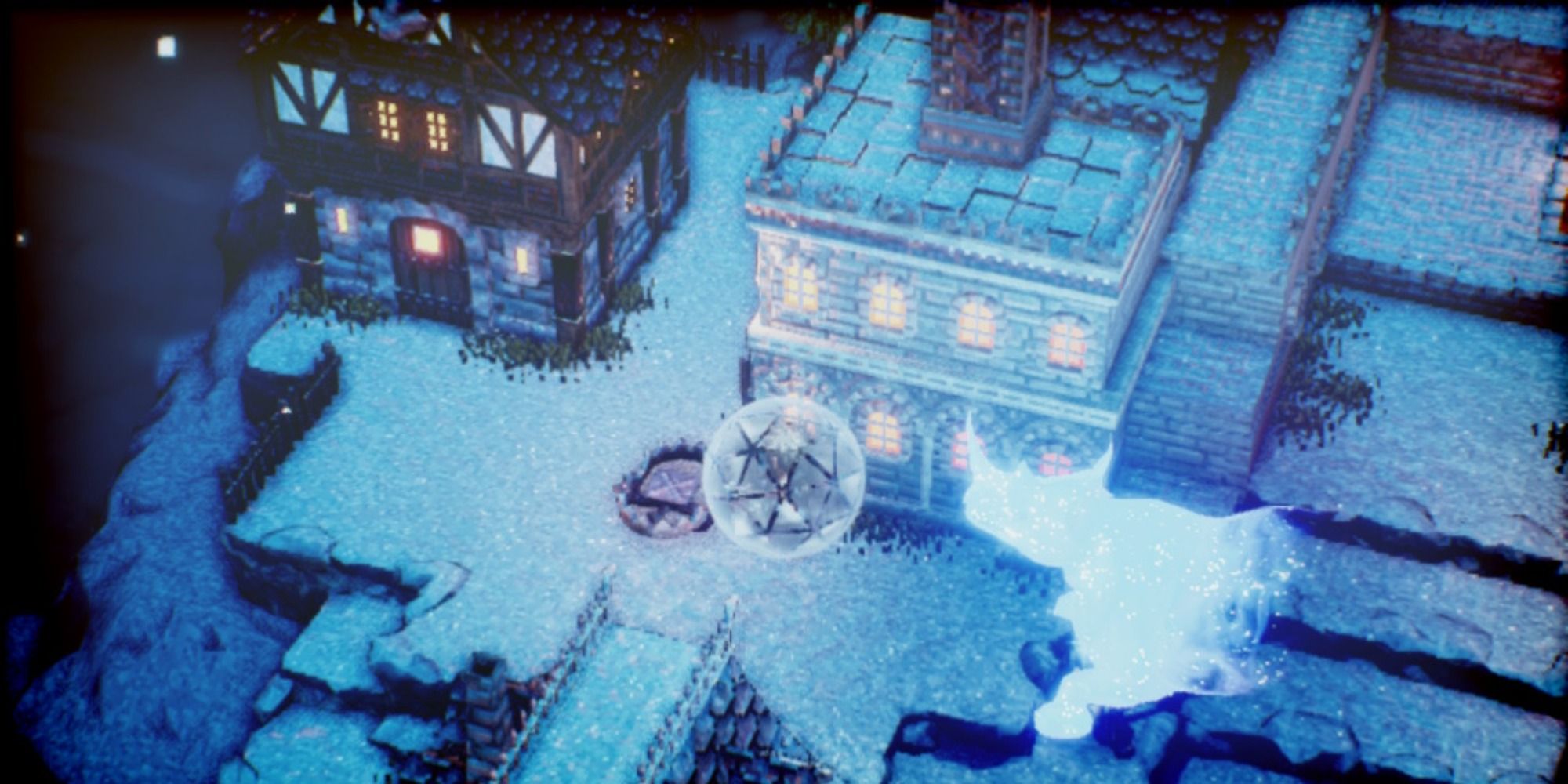 Benedict's Bulwark skill is the best tool he has in this fight. It's a defense buff that lasts three turns and only costs one TP. Keep this up on your best units at all times, Rudolph, Frederica, and Erador. Cycle between them to keep the buff up as long as you can. 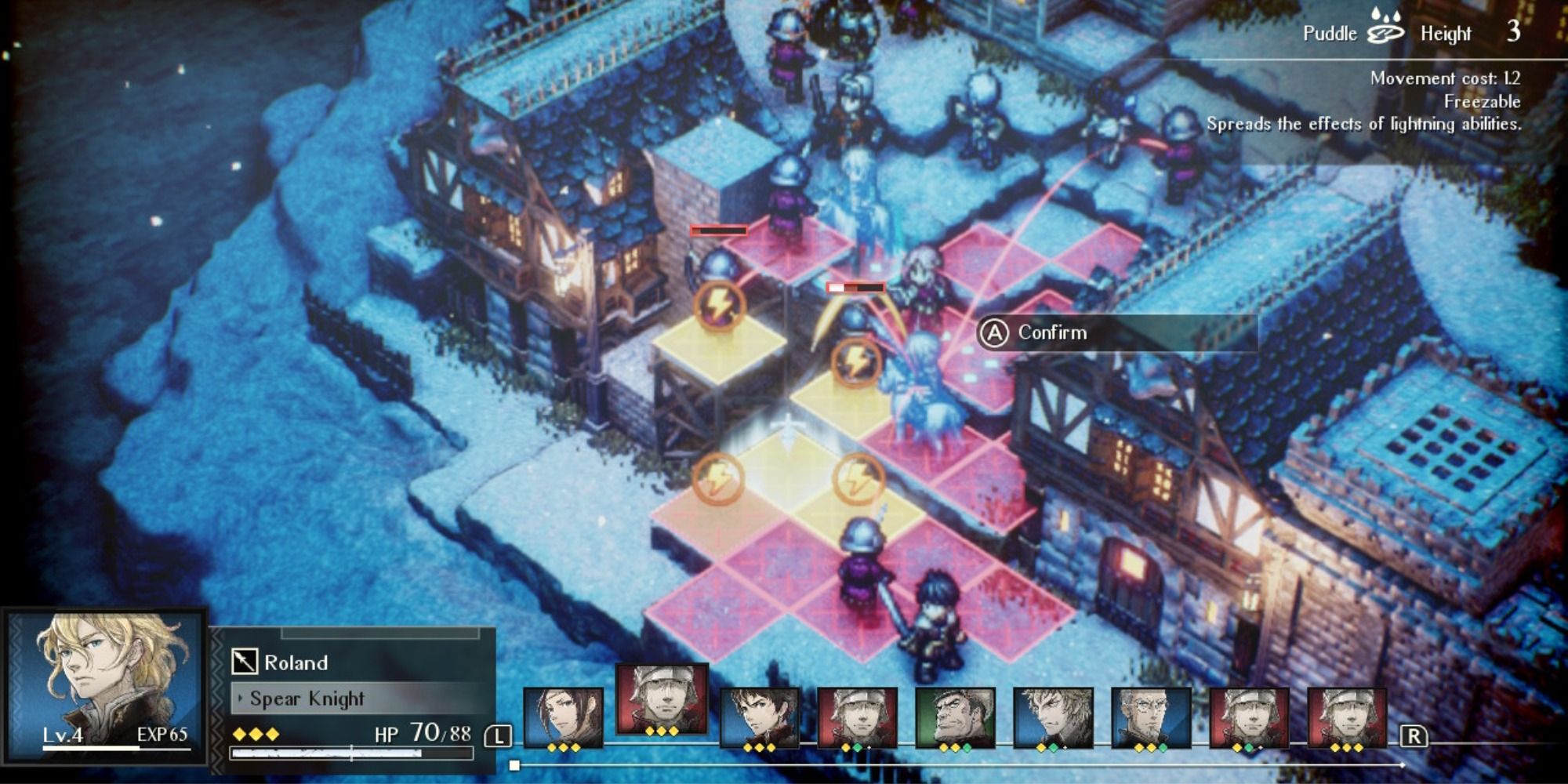 If you purchased some Thunderstones as we recommended earlier, you can employ a pretty devious strategy in this battle. Since the ground is covered in snow, Frederica's Scorch ability will create puddles of water on every tile it targets.

If you use a lightning attack on a water puddle, the damage will spread to every puddle tile it's connected to. You can use this to perform multiple area of effect attacks on the same group of enemies in quick succession, with some forward planning. 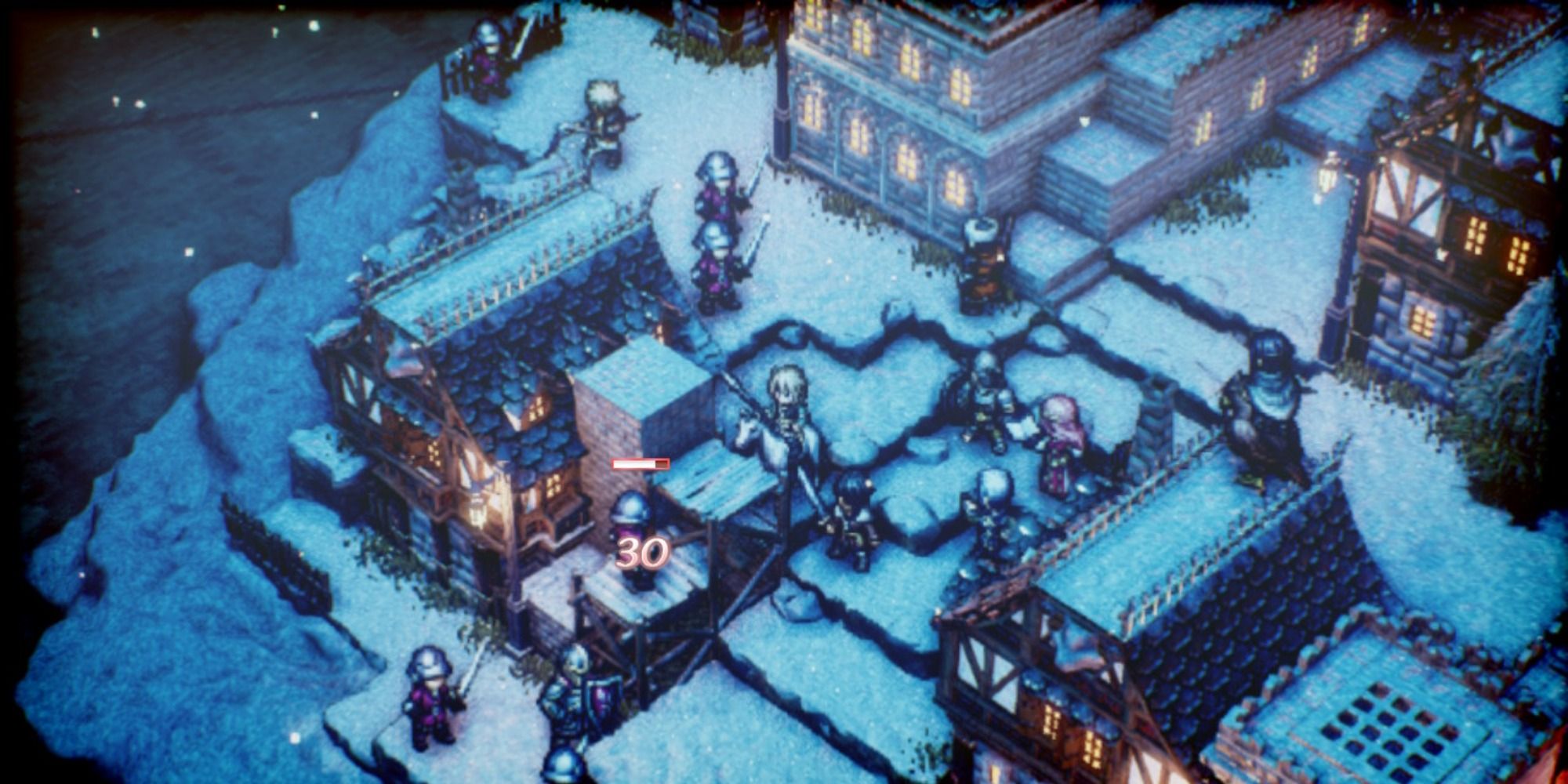 Of the enemies you're up against, high-value targets are the Bowman who will spend the battle sniping your units from a rooftop, and the Shieldbearers, who can mess up your planning with attacks that push your units about. Just keep up the offense and make use of all your healing options to come out on top.

Once you have won the battle, you'll get to learn a little bit more about Rudolph's story and end up recruiting him into your party permanently. Unfortunately, you don't get to keep Sycrus and his overpowered buff skill.

This scene features Archduke Gustadolph and the Mean Twins talking about Lord Dragan and the political situation.

With the diplomatic mission and chapter three over, farewells are spoken and it's time to head back to Glenbrook.