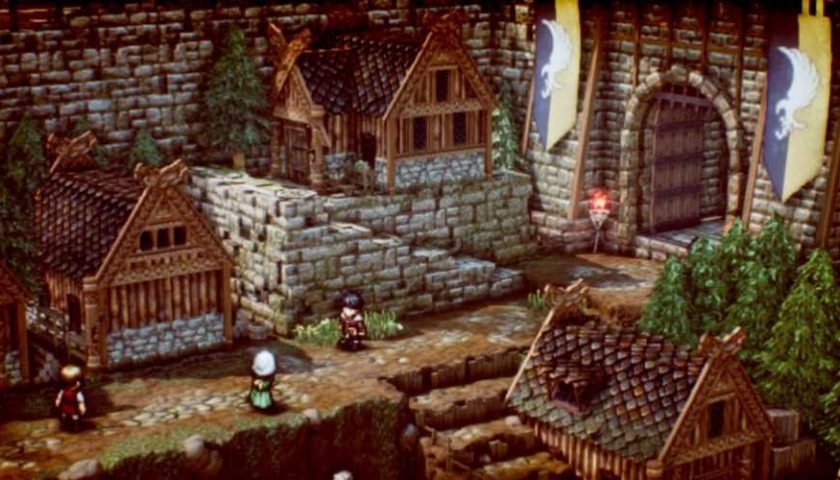 Triangle Strategy is a huge, sprawling RPG with a ton of content. While it starts off on the easier side, the difficulty ramps up quickly and you're forced to think hard about what kind of strategies you want to employ in battle.

Thankfully, the introductory chapter is great at easing you into the game's flow. You'll meet quite a few of the principal characters, get to take part in your first bout of combat, and get acquainted with the game's complicated Conviction system. 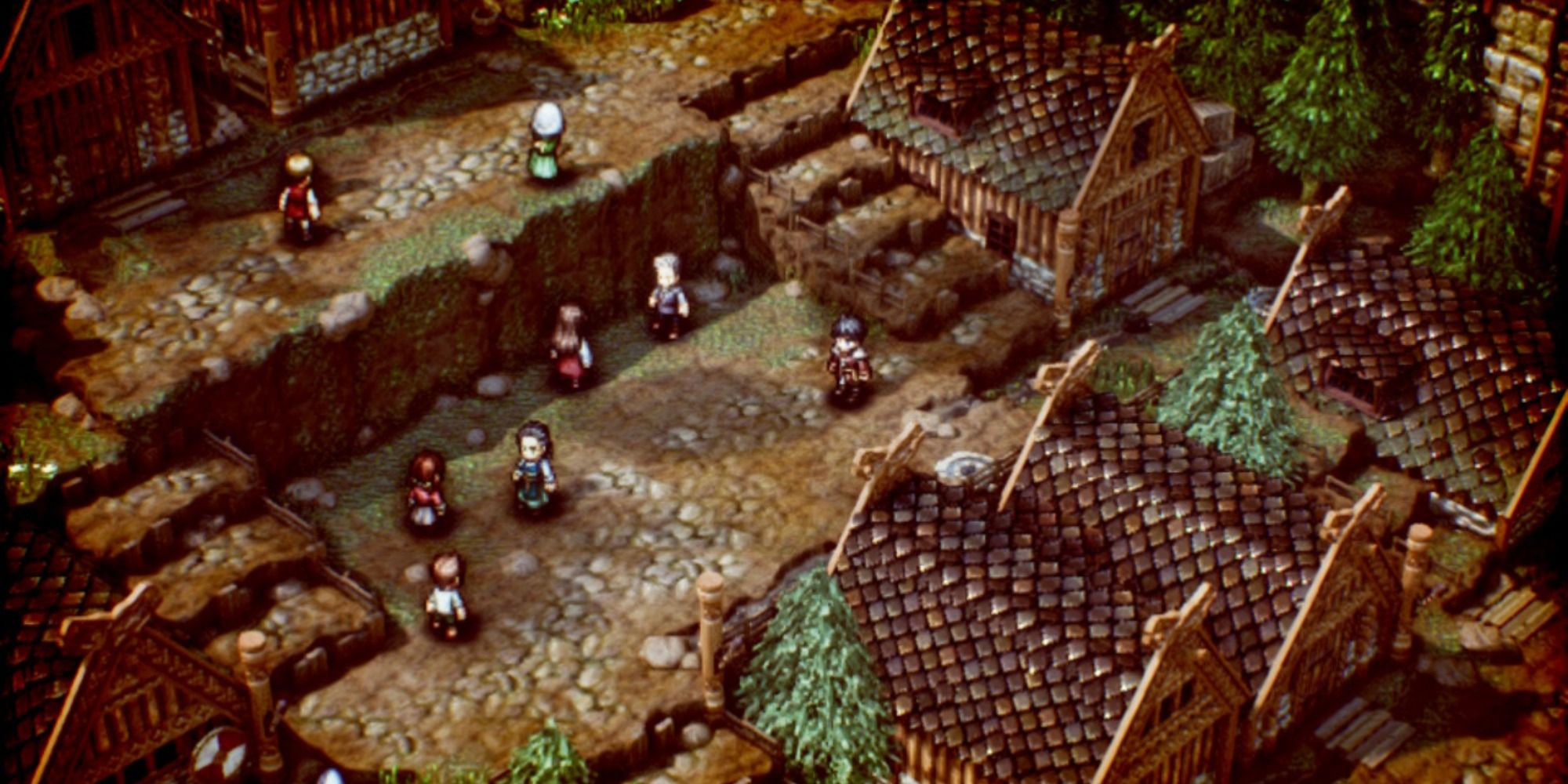 After the introductory scenes of the game, you will be brought to the World Map. Here, you'll select the story that you want to view. The majority of the time, this will just be the next Main Story event, but sometimes you'll be able to witness Side Stories.

Side Stories are optional and serve to provide you with more detail and lore about the characters, history, politics, and lore of Norzelia.

At the beginning of the game, you will have access to only a few options in the main menu:

You can tell what type of event lies behind an icon by the symbol next to it.

To continue, select the Main Story icon over Wolffort Harbor.

In this event, you will meet Frederica and Geela as they arrive in Glenbrook for the first time. 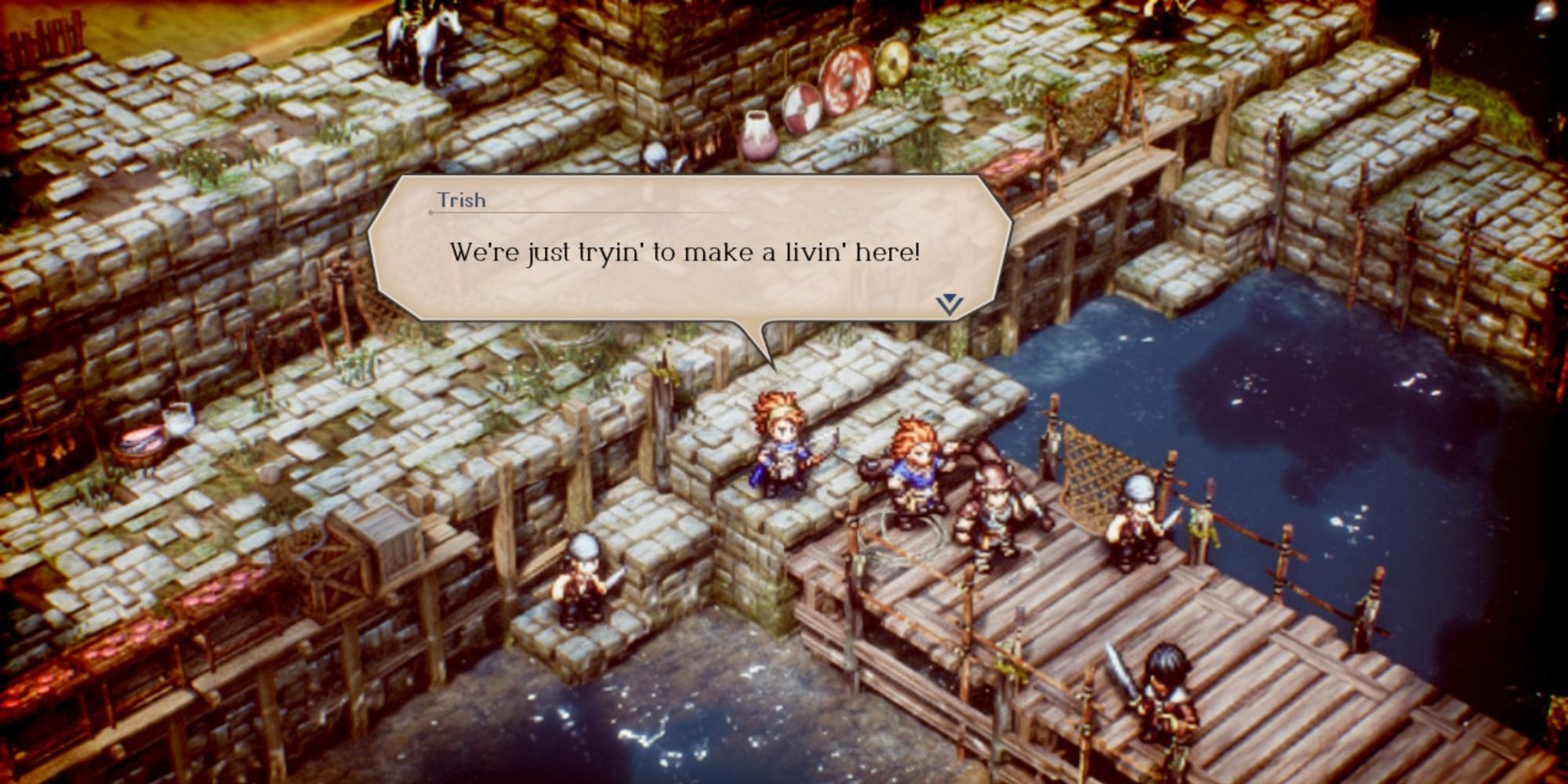 During the short cutscene, you will be given a prompt and you have three choices for how to answer. This is part of the game's Conviction system. As you play the game, Serenoa will develop his Convictions for three different philosophies: Utility, Morality, and Liberty.

At many points in the game, you will be required to answer a question in a way that develops one of these Convictions. Your Conviction levels will affect the characters you can recruit and how easy it will be to convince characters to go along with your choices – which is very important at certain points.

In this walkthrough, Conviction choices will be presented in a table with the answers arranged as they are in the game. We will also tell you which Conviction each answer relates to, though you will not be able to see this information in the game itself until much later.

Once you've made your choice, it's not long before the battle starts.

As the first battle of the game, the battle in Wolffort Harbor is really easy. It serves as an effective tutorial for the game's combat system, though, so read those pop-ups thoroughly to familiarize yourself with the concepts. Even if you're an SRPG veteran, Triangle Strategy has its own quirks such as elemental puddles and its TP system for skills. 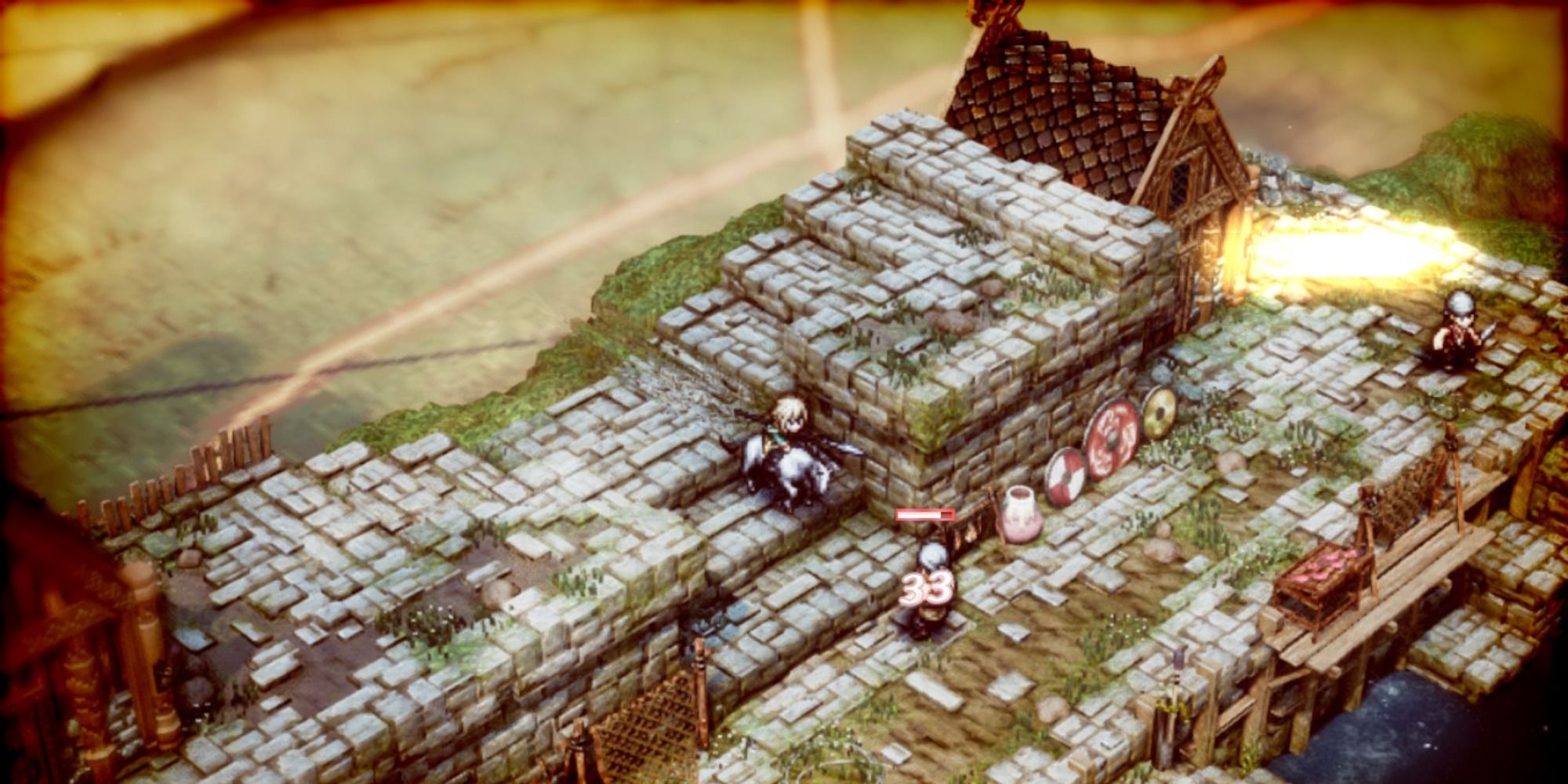 This battle introduces some simple concepts that you should be trying to take advantage of at all times. One is that you will get a boost to your damage if you can attack from a higher level. The Blond, Blue-Eyed Man starts off on the stairs at the back of the stage and is in a perfect position to try this out.

Serenoa and the Blond, Blue-Eyed Man are your strongest units here, so make sure they're kept at the front lines. They can take a beating quite well, and you have Geela for healing. She should be using Cure Wounds every turn she gets.

You'll notice that some actions, such as attacking from a height or performing a follow-up attack, will grant you Kudos. This is a special currency used for purchasing incredibly useful special abilities later in the game. Try to accrue Kudos whenever you can. 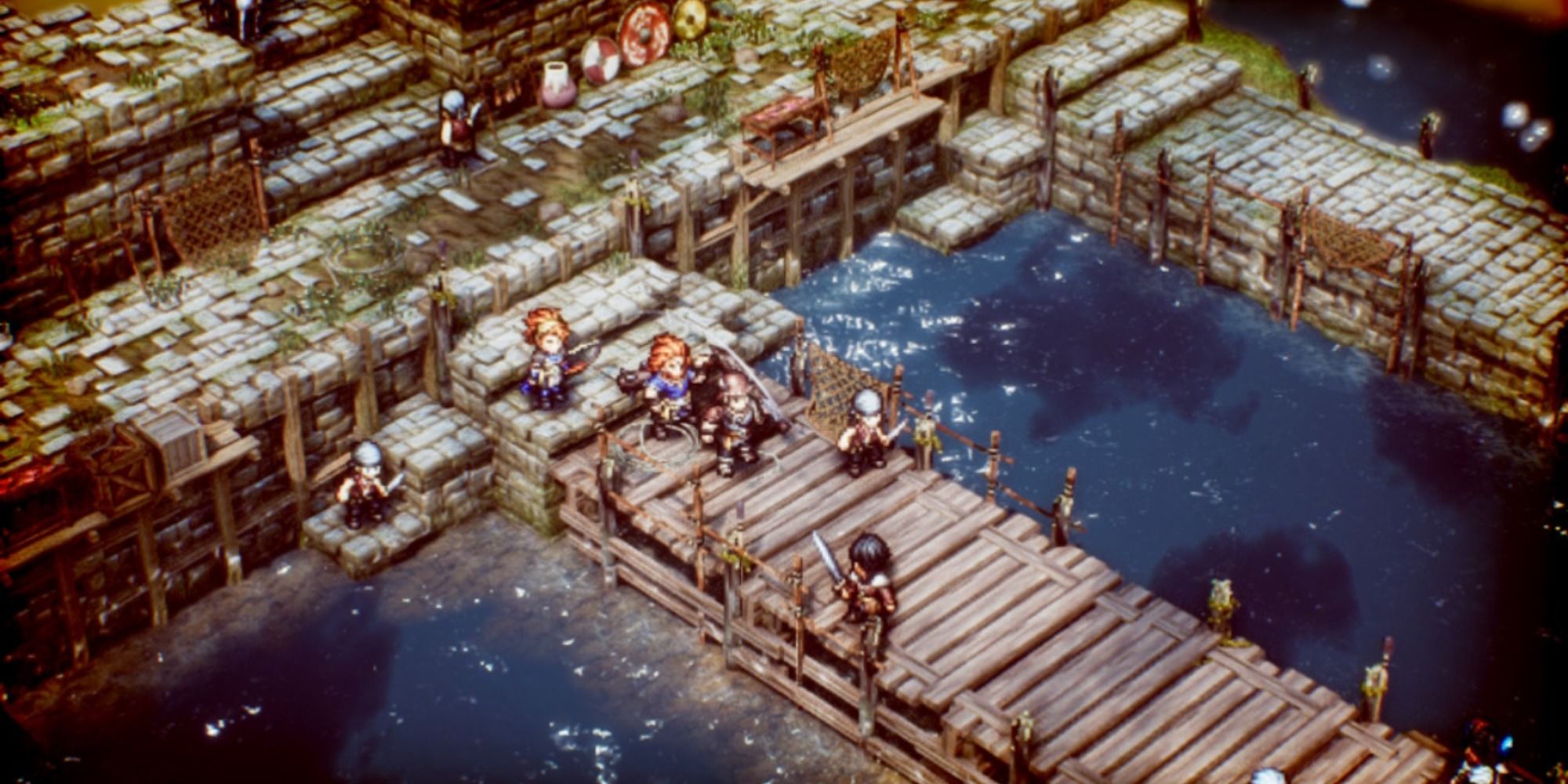 As bosses, Travis and Trish aren't all that threatening. Travis can disrupt your positioning with Backward Toss, but that's just more likely to leave him open for follow-up attacks with the space created. Trish is an archer, but her attacks will glance off you more often than not.

Once you have dealt with the generic bandits, it's very easy to surround the leaders and get them multiple times with back attacks and follow-up attacks. They should go down pretty quickly. 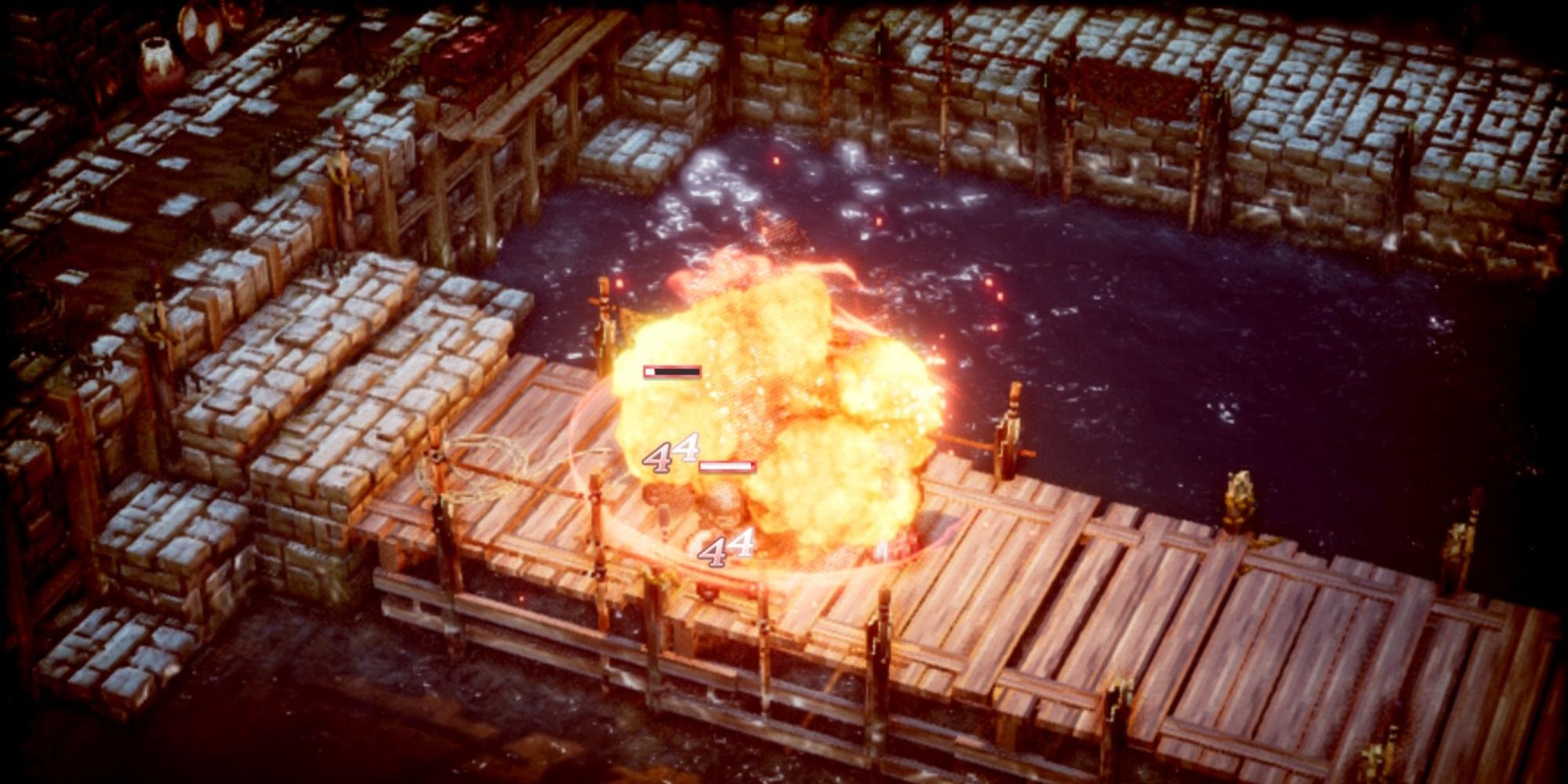 An important thing to learn early on is that your area of effect skills will not harm allies. This means that you can freely target Frederica's Scorch spell wherever you want – it won't harm your allies.

Once you have won the battle, a small scene will play in which the mysterious stranger will reveal himself to be Prince Roland. You will also be confronted with another Conviction choice.

After this, Frederica and Geela will officially join your forces and you will return to the World Map.

The Encampment menu will now be available to you. This is where you'll do most of your shopping, and all of your weapon upgrading and such.

This event introduces Prince Frani, Roland's older brother, and a whole host of other significant characters from the three factions of the game. You will also meet Hughette, a future party member who wields a bow and rides a hawk.

In this scene, you will meet Anna and Erador. This will quickly join your forces.

This event introduces the current Lord Wolffort, Serenoa's father, Symon. Once this has finished, you will have finished the first chapter of Triangle Strategy!