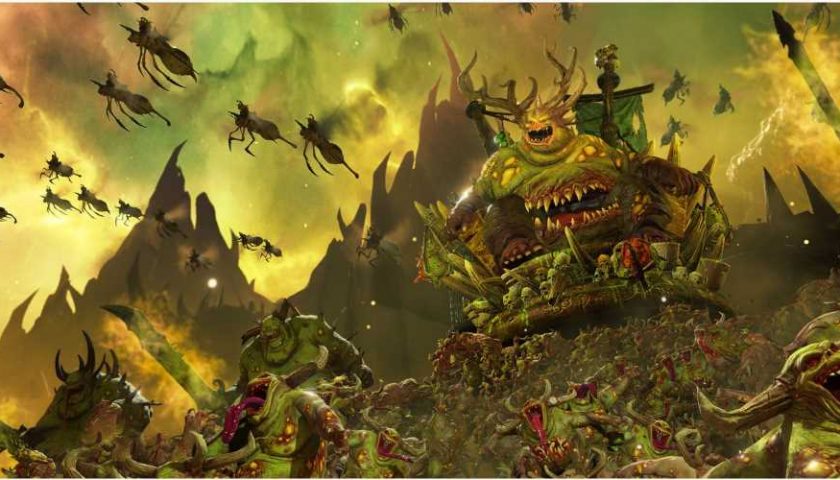 The Lord of Pestilence, Nurgle is the Chaos God of disease, decay, death, and rebirth. In comparison to his rivals, he brings a slower, more strategic style of play to Total War: Warhammer III, and can be a difficult faction to master.

This beginner's guide will describe the best way to utilize Nurgle's strengths, including army and campaign advice, unique mechanics, Legendary Lord, and how to play the first ten turns. 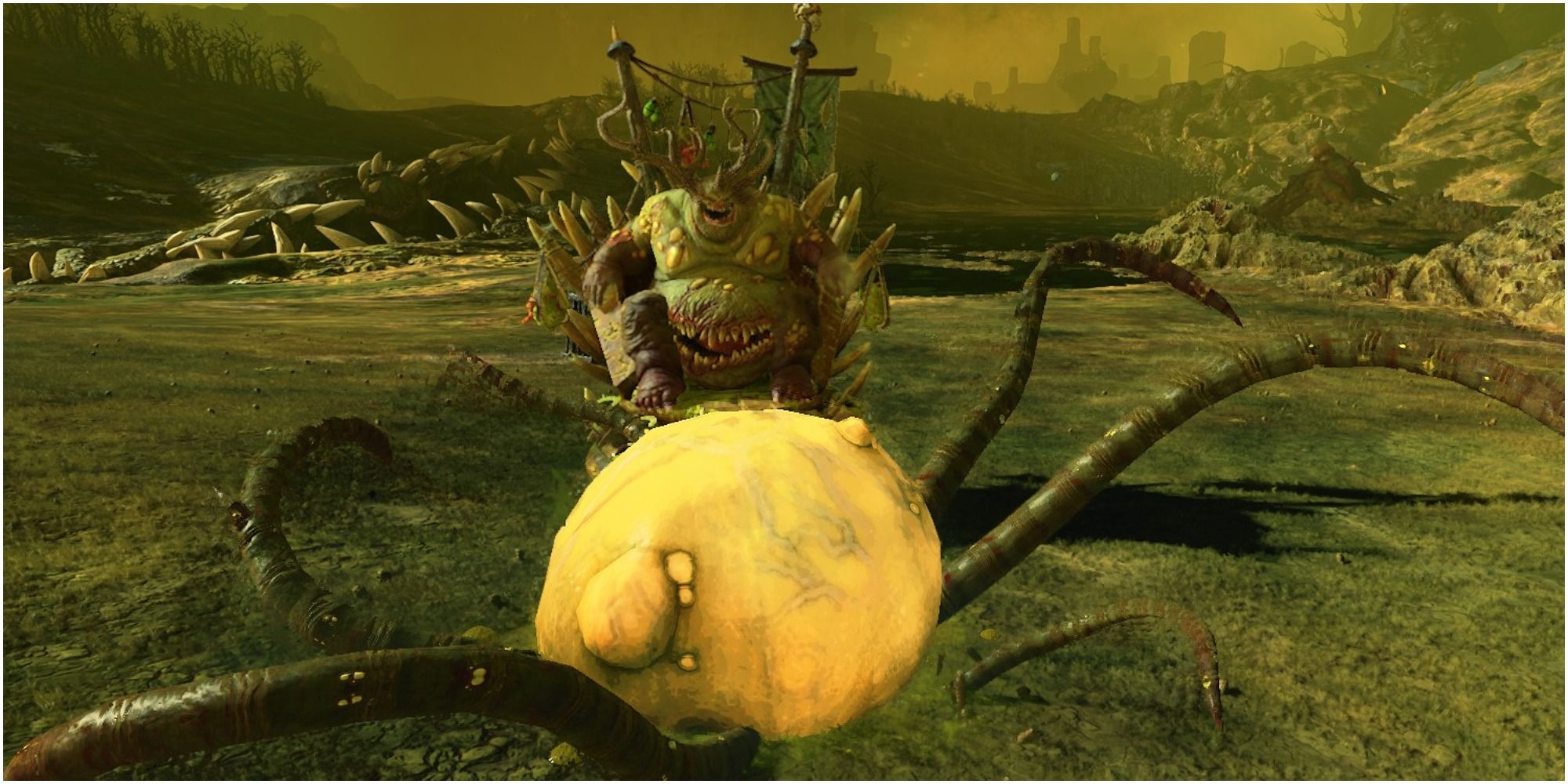 Best Matchup: Khorne – He may excel in melee, but you fare equally well in absorbing melee damage. You can hold his lines while using magic to turn the tide of the battle.

Worst Matchup: Tzeentch – There could not be a harder counter to you, as his high damage ranged units will gun down your army while you struggle to catch him or beat his cavalry options.

Nurgle's primary strengths are his unit durability, ability to inflict plagues, and instant unit recruitment. This makes you challenging to attack on the campaign map, as even the strongest enemy army will struggle when afflicted by your deadly diseases. Your general playstyle is a slow one, relying on slowly expanding your territory and Corruption while buffing your armies with the nefarious concoctions out of your Plague Cauldron.

However, you come with some major weaknesses, and Nurgle is not a recommended faction for beginners, as he can seriously struggle if played incorrectly.

Your economy is, in a word, trash… The life cycling of your buildings can be nice for unit recruitment, but can seriously hinder your income, and you are not able to operate well at a deficit like more aggressive factions such as Khorne.

Having multiple armies running around raiding and sacking is not the Nurgle way, and you need to think carefully about how cost-effective your units are, to retain military strength as well as sufficient income. 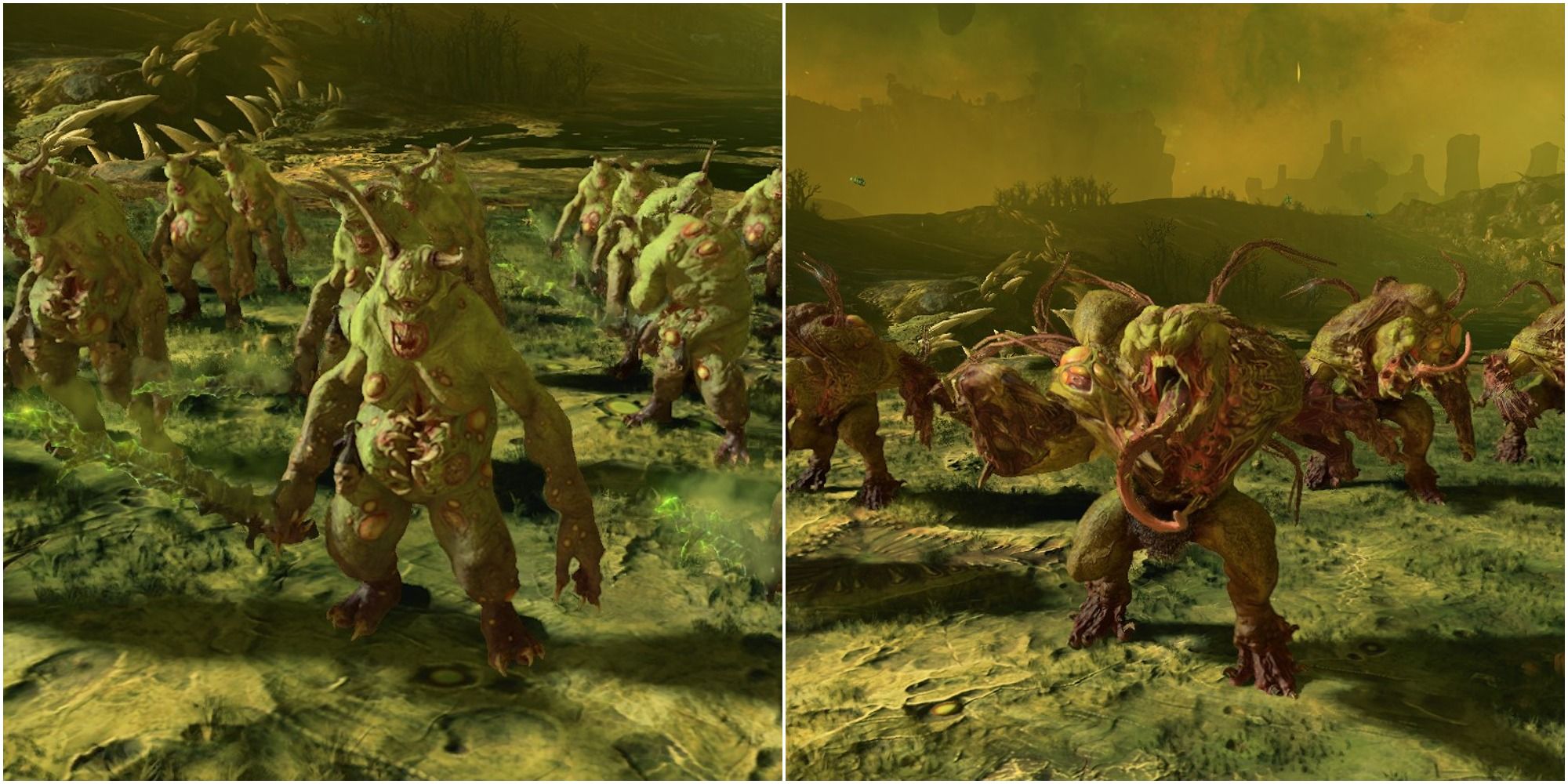 When it comes to the battles, Nurgle has a slow, yet durable roster at his disposal. Units that provide either speed or ranged capabilities are vital for you, as your slow, low damage Infantry are going to struggle to bring down your enemies in a timely fashion.

What they will do, however, is to hold. Much like playing the Dwarves, Nurgle relies on a frontline that will not crumble under pressure and can tank for an extremely long time. High health values on units such as Plaguebearers of Nurgle means you can reliably defend the line, while you focus on micromanaging either a spell caster or flanking cavalry.

The Lore of Nurgle also has some strong spells. A well-placed Blight Boil is going to inflict huge damage to blobbed enemies, and Fleshy Abundance is a great healing spell that further strengthens your unit's ability to endure.

With your ability to grind out a fight, you can slowly overcome more powerful factions, as long as you are fully aware of their key threats. Tzeentch in particular will obliterate your units, tanky as they are, and you will need to be proactive in getting your flanking units on top of his ranged as quickly as possible. 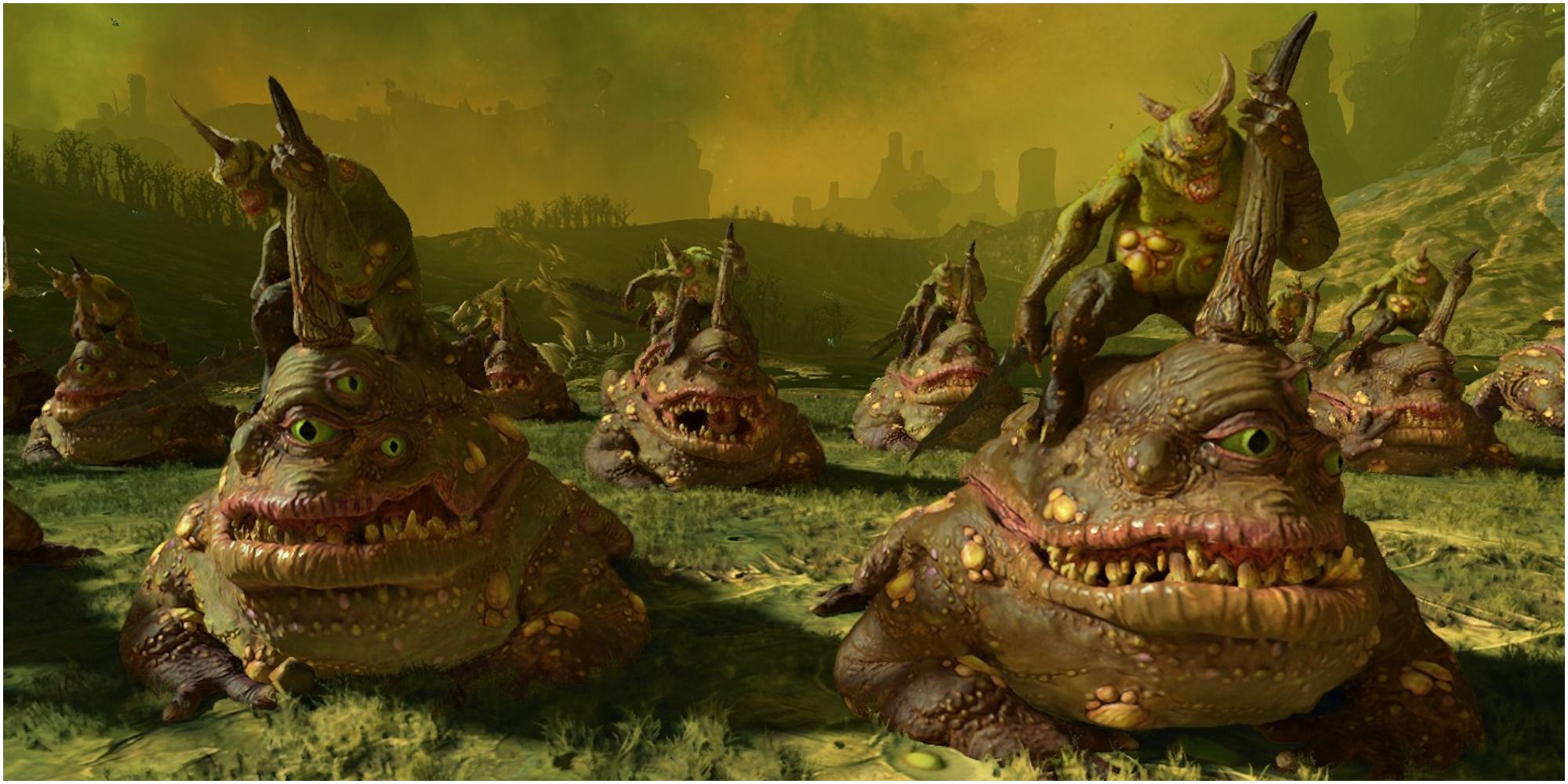 On the campaign map, Nurgle can also struggle to impose himself, and you need to be cautious in overextending in the early game. Taking safe battles and slowly building up your economy is the best way to achieve success. Nurgle is a growth monster, but without the Weeping Creepers Infrastructure building you are going to struggle with your casualty replenishment rate, and you will not have the early game income to create multiple strong armies.

The key to understanding Nurgle's campaign playstyle lies within the Plague Cauldron. Making use of his various maladies can start to get the ball rolling for you, and you can effectively cripple stronger enemy armies with the right Plague. However, for this, you will need to acquire Infections and to do that, you will need to win battles.

Keeping a Pox up right from the start of the game can help greatly, as it will strengthen your Nurgle Corruption in your starting province, and provide you with a small amount of much-needed growth.

Unfortunately, Nurgle's playstyle is quite weak in the Total War Warhammer III base campaign, which relies on quickly acquiring Daemon Souls by entering various Chaos Rifts. The slower, more methodical way Nurgle likes to play is at odds with this style, and factions who can establish a strong early game force that can quickly enter and exit a rift will do much better. Your late game is very strong, as you will have enough income to instantly create multiple full stacks, but it will take a long time to get there.

Investing heavily in your starting army is recommended, and you may need to rely on your Plagues and instant recruitment to defend your lands whilst you are away in a Rift. 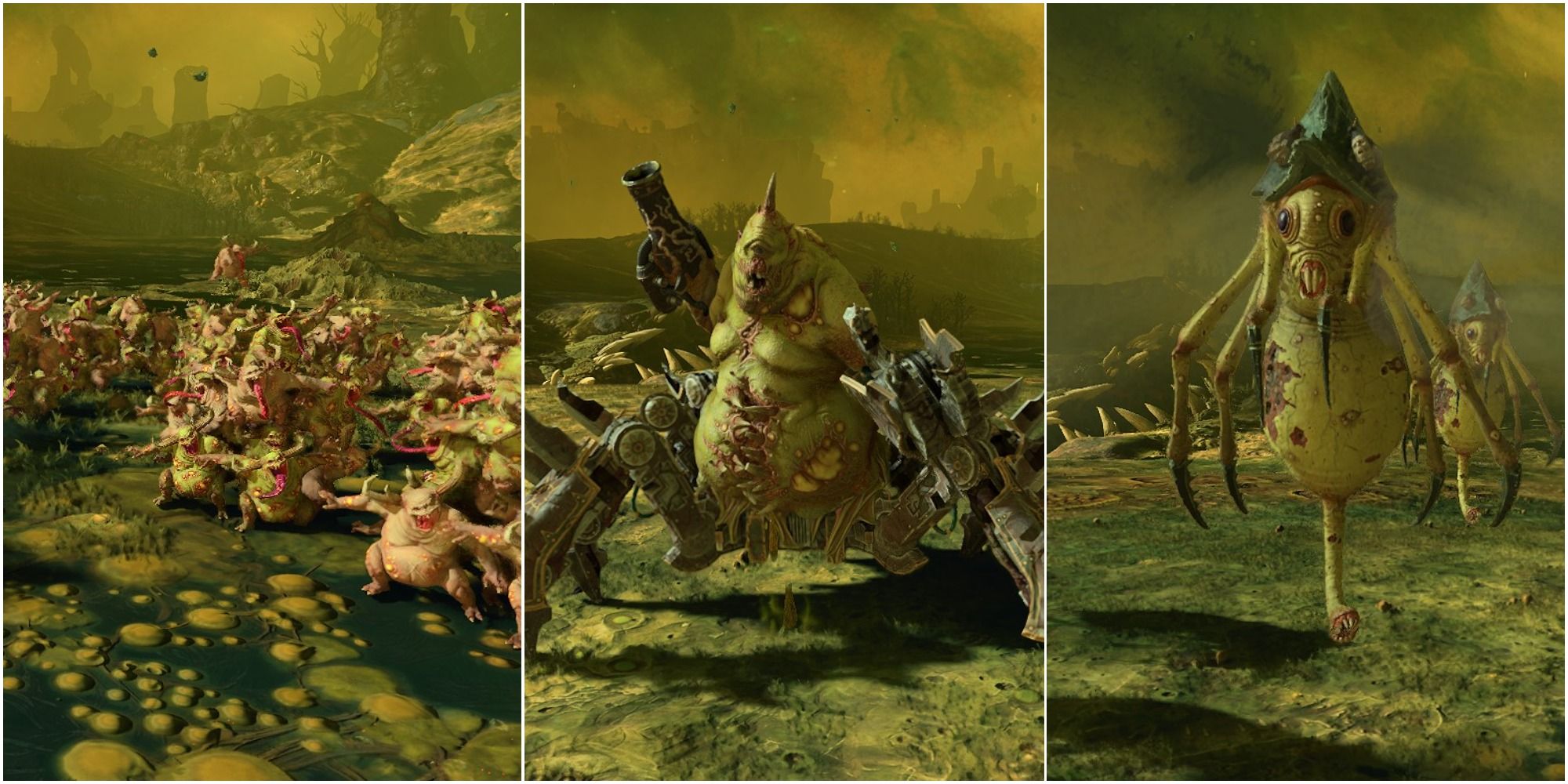 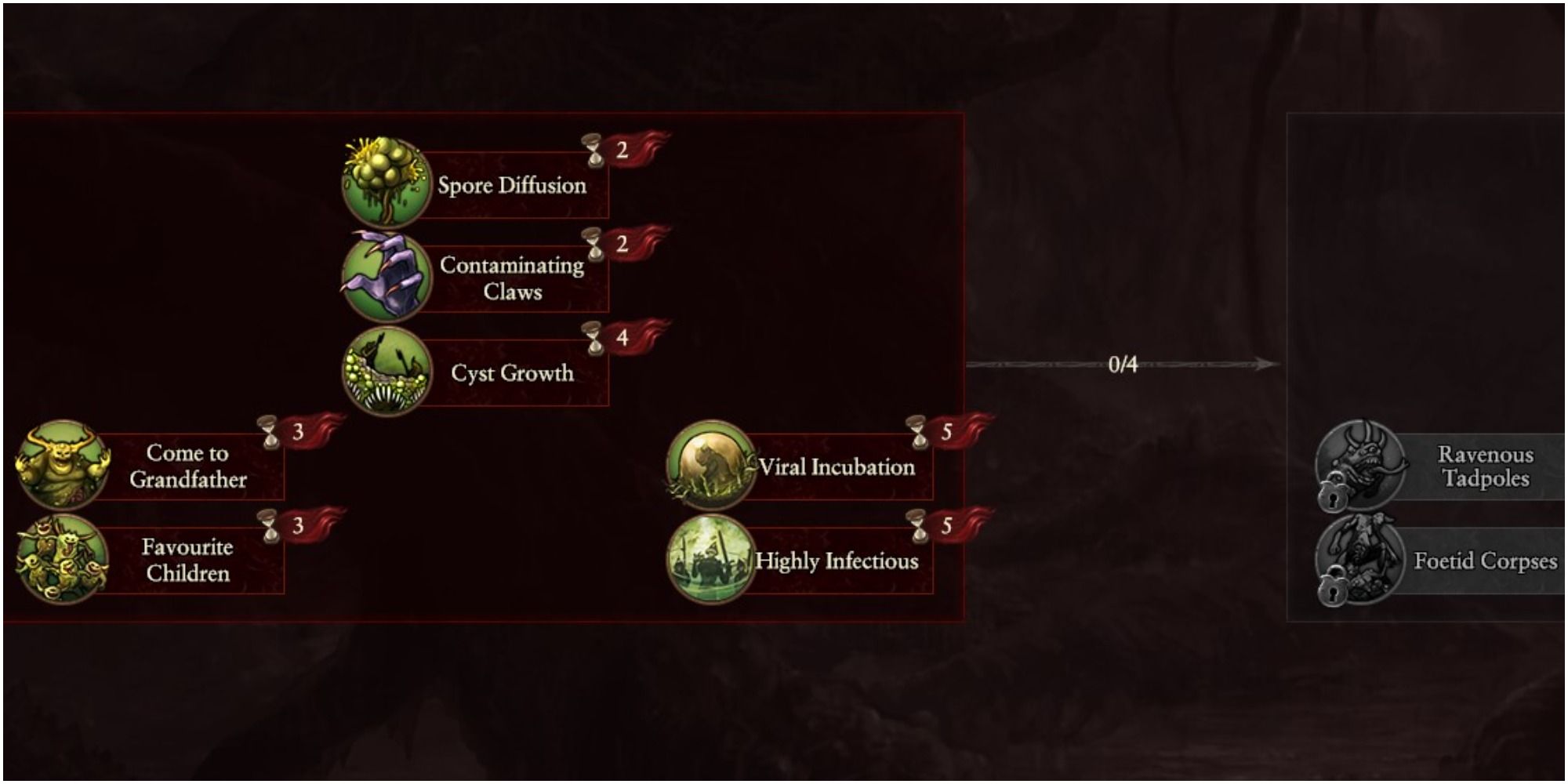 Infections are your bread and butter currency, used for creating Plagues and summoning the Plague Cultist Hero, they can be acquired via battles, sacking settlements, spreading Plagues, or especially from your cultist buildings, and Nurgle is probably the faction most reliant on creating multiple cultist settlements across the map. 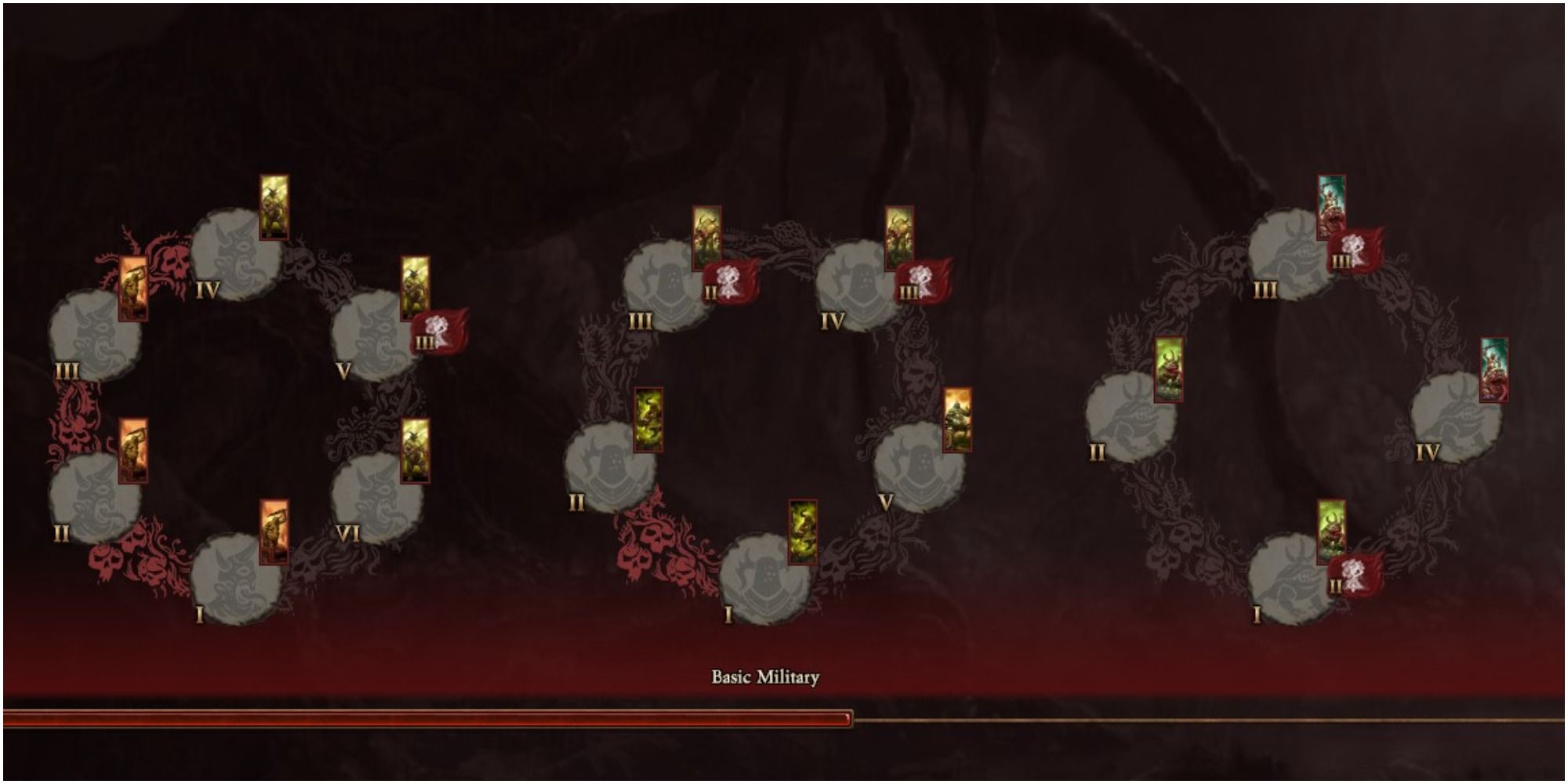 Nurgle's settlements buildings are one of a kind. Instead of upgrading them with income, as with standard factions, Nurgle's buildings will grow over time, supplying units to your recruitment tab, and strengthening their effects. After reaching the maximum tier, they will 'die' and shrink back down to their base tier, ready to begin the cycle all over again.

This mechanic synergizes nicely with your instant unit recruitment, as you can build up a good supply of certain units, and have them ready to go at a moment's notice. However, it can mess with your income, and your settlement output is going to fluctuate greatly.

Findings ways to shorten the growth cycles are very powerful, as they allow you to quickly build up unit supplies. Indeed, Infrastructure buildings are fantastic, as they will regularly supply you with large amounts of Nurglings, a cheap and expendable unit. Gathering income is crucial for you, as you will need it to strengthen your starting army.

This mechanic propels Nurgle's late game into the stratosphere, as you will be churning out endless amounts of high-tier units thanks to your multiple settlements. The only problem is getting there… 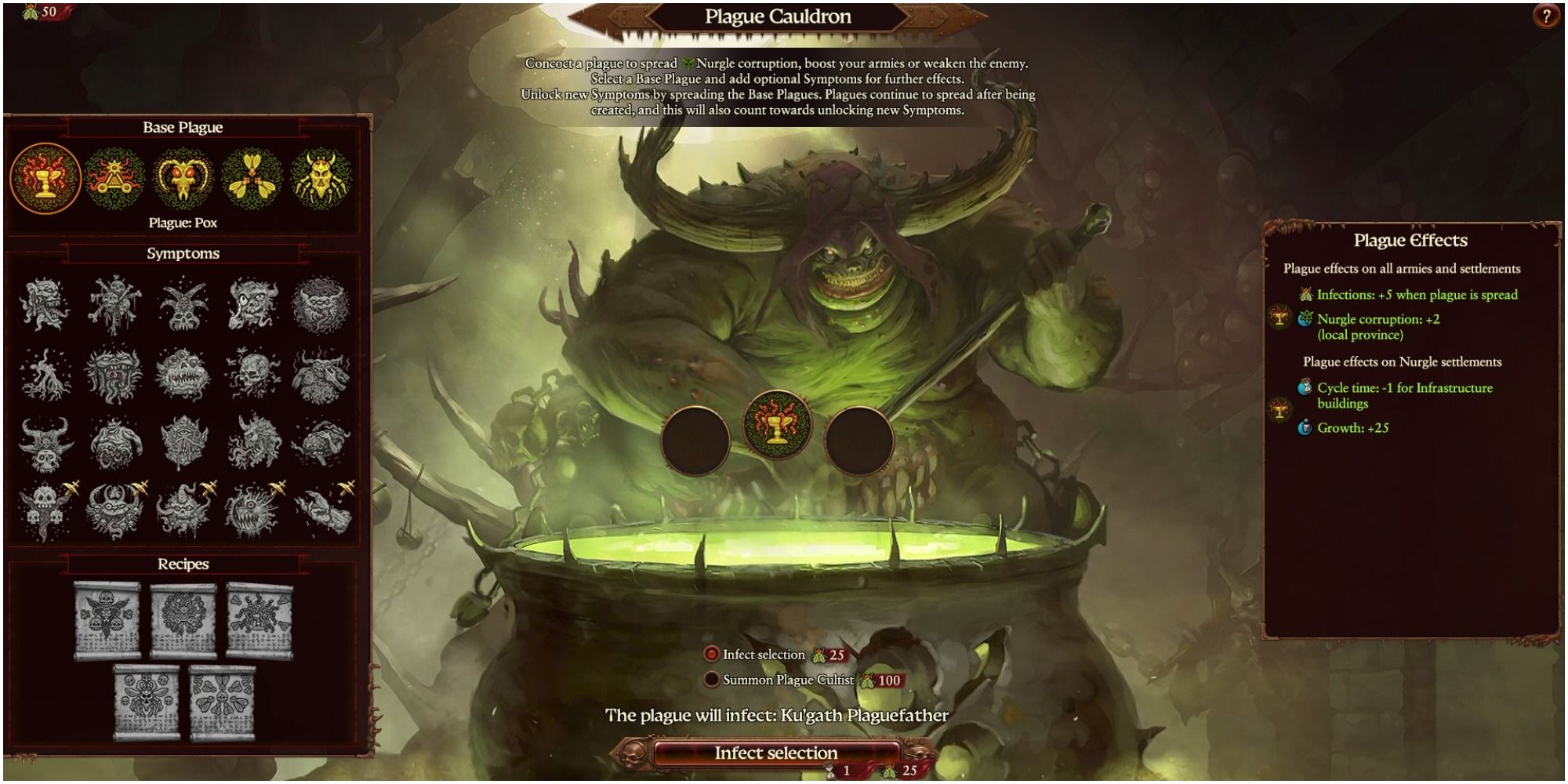 Styled after Grom The Paunch's Cauldron mechanic, the Plague Cauldron is where you will be role-playing as an evil twisted chef, mixing and matching various ailments to your liking. There are many Symptoms to unlock via the Technology Tree, or by spreading a certain Plague several times.

Nurgle's most powerful Recipes lie at the bottom of the Cauldron and must be unlocked by previously unlocking each component. These Plagues are truly devastating, and structuring your Plague spreading around unlocking these is a great way to optimize your unlock pathways. 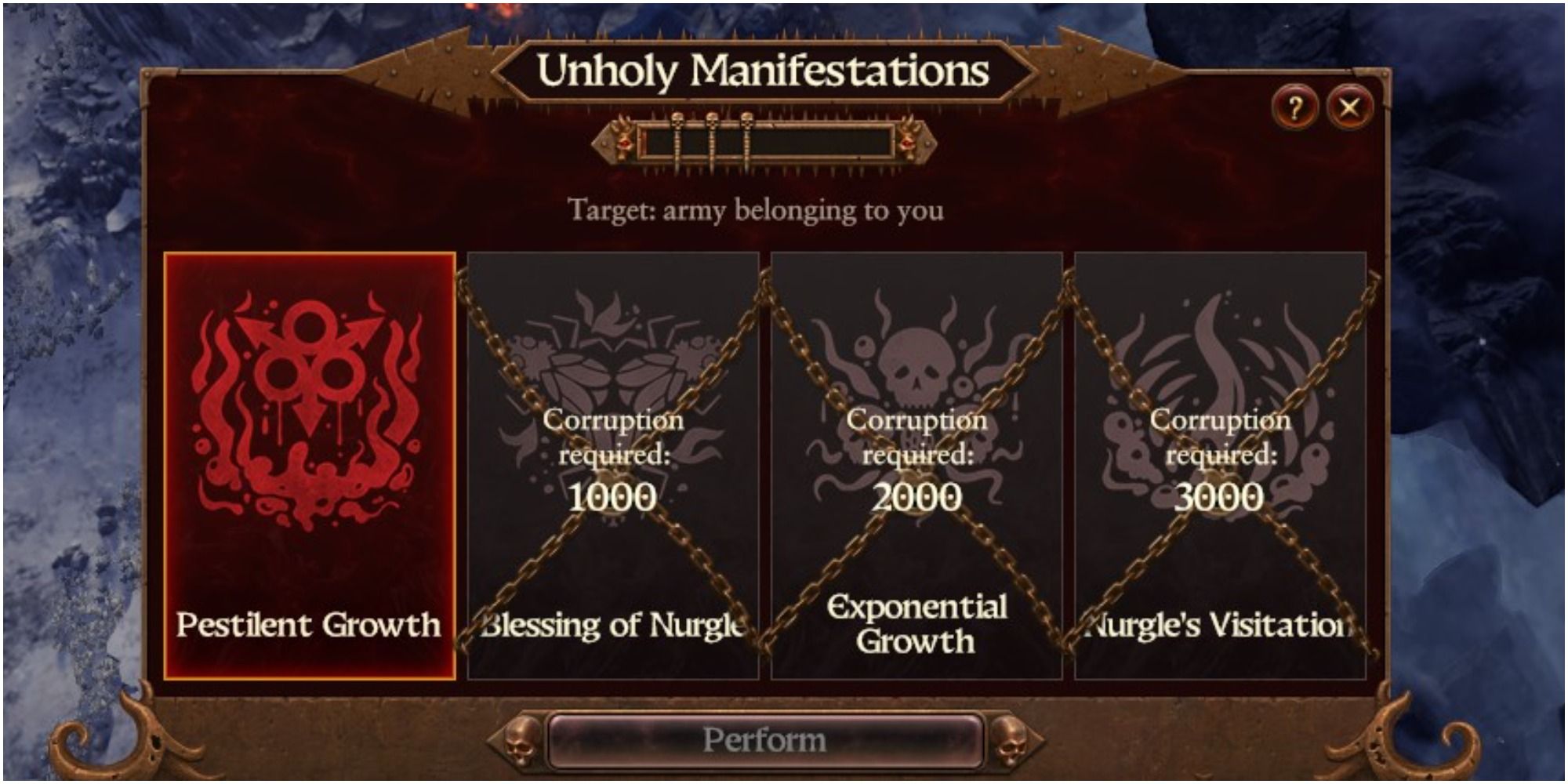 As with all Chaos Daemon factions, Nurgle possesses four Unholy Manifestations. Similar to Rites in previous titles, these can be used to deliver powerful effects, and later Manifestations can be unlocked when you have accumulated enough of your Corruption. Your Manifestations will become empowered when you are the Ascendant in The Great Game. 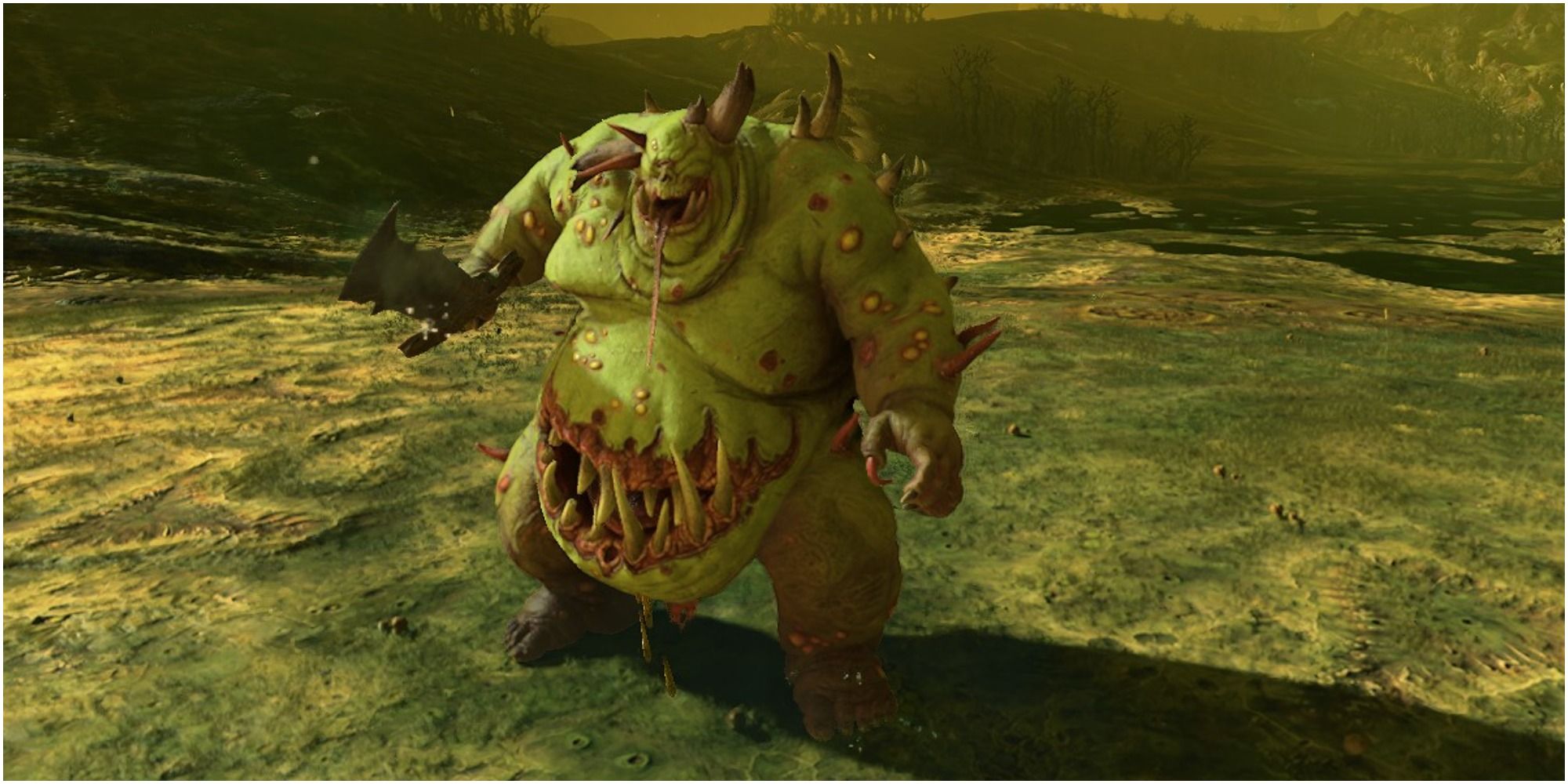 While not normally an impactful mechanic, Nurgle's cultist buildings are a very strong way of generating Infections. Spamming multiple Plagues is important for Nurgle, and so Cults should not be overlooked. The go-to building will be the Shelter, but if the region possesses enough growth, then the Refuge will be better to build. 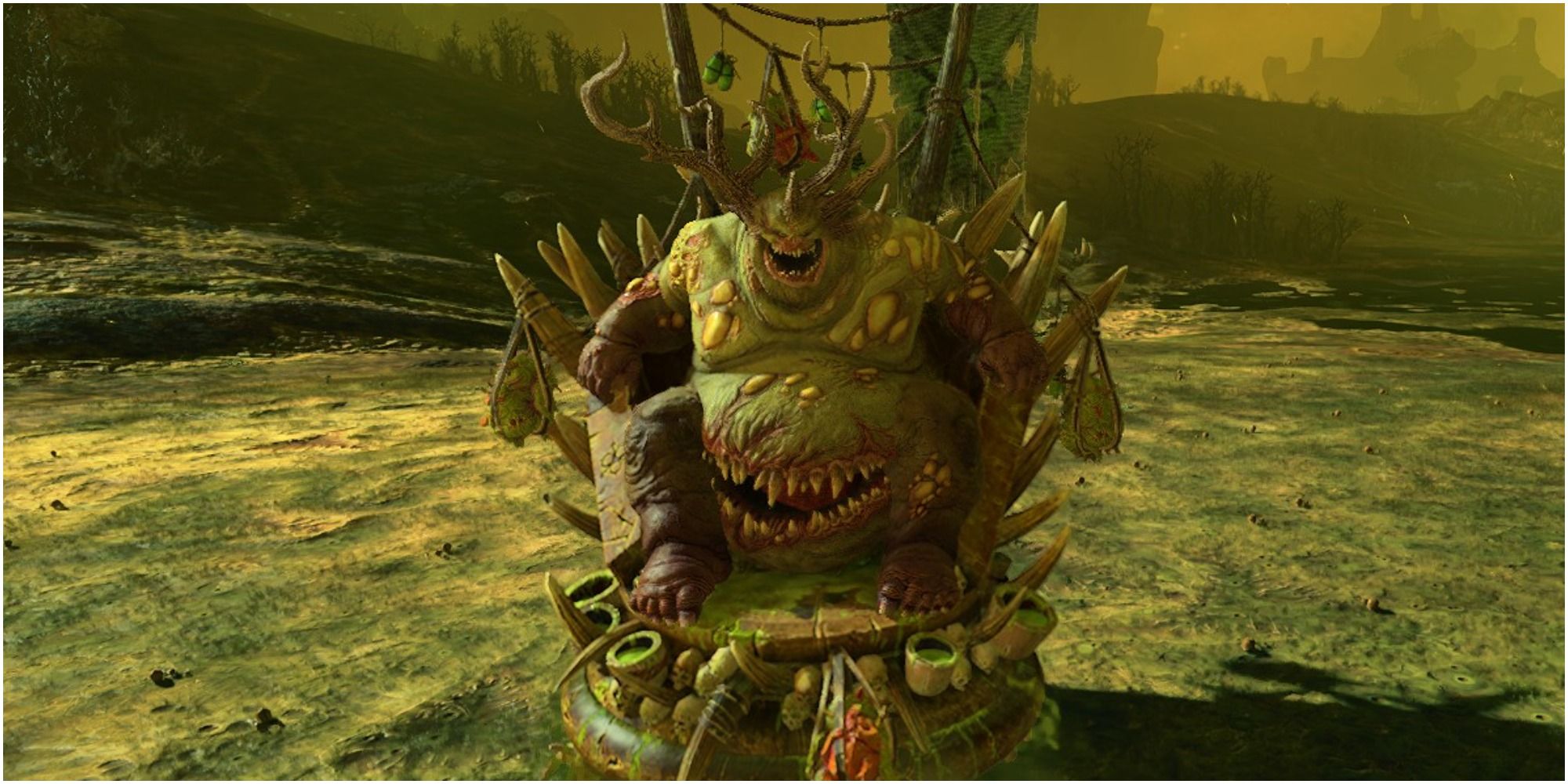 Nurgle's Legendary lord is Ku'gath Plaguefather. Officially the tankiest Legendary Lord in any Total War: Warhammer title, Ku'gath is a defensive behemoth, absorbing huge amounts of damage while fighting back with powerful spells and lord skills.

His Lord effects are:

Ku'gaths Lord effects are pretty mediocre, all of them synergize with the way you will be playing, but it takes him leveling up a lot of his skills before he can begin to shine.

Important skills to level on Ku'gath include:

Ku'gath has a wide variety of good skills, and pumping his health via Scarred Veteran is very high value, thanks to his massive base health pool. 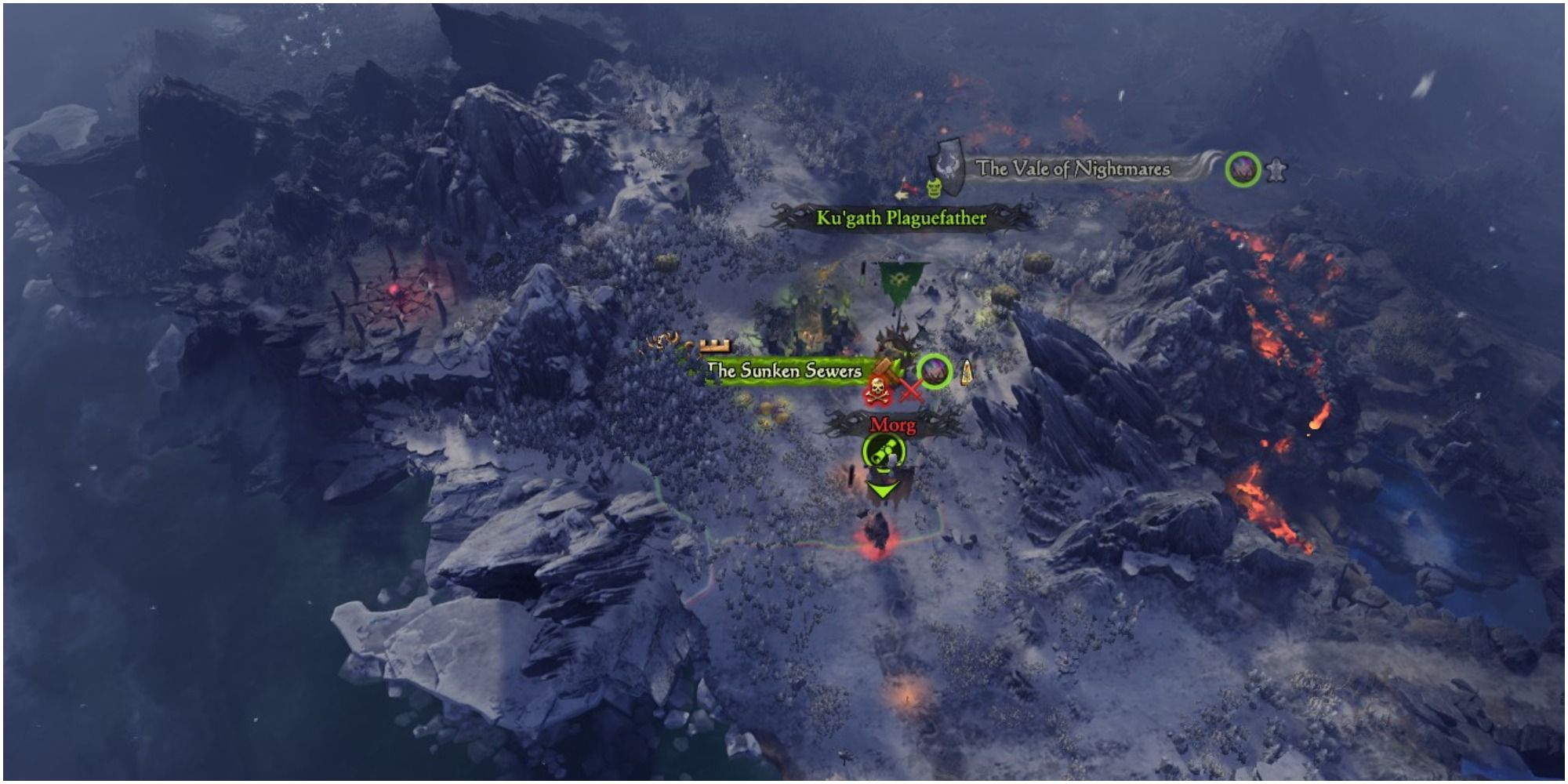 When playing as Ku'gath Plaguefather, you will bring your campaign in The Cliffs of Death province, holder of the Sunken Sewers settlement.