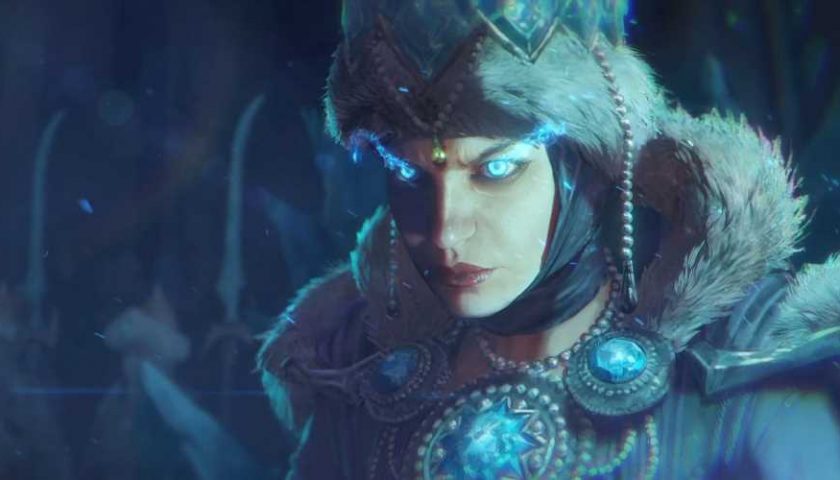 Kislev is one of the main factions available in Total War: Warhammer 3. They're a special treat for longtime Warhammer fans, as apart from a few mentions in the lore and a handful of models for the tabletop game years ago, this is the first time the Tzardom of Ice has been playable in any capacity. As the northernmost of the human kingdoms, Kislev is the first line of defense against the forces of Chaos – a distinction that has made them as hard and cold as the winter itself.

While Kislev is among the most straightforward of the new factions introduced in the game, their internal politics mean you'll have to watch out from threats inside your empire as well as invading armies. Here's everything you need to know about how Kislev works, as well as a guide to getting started on the right foot as Tzarina Katarin. 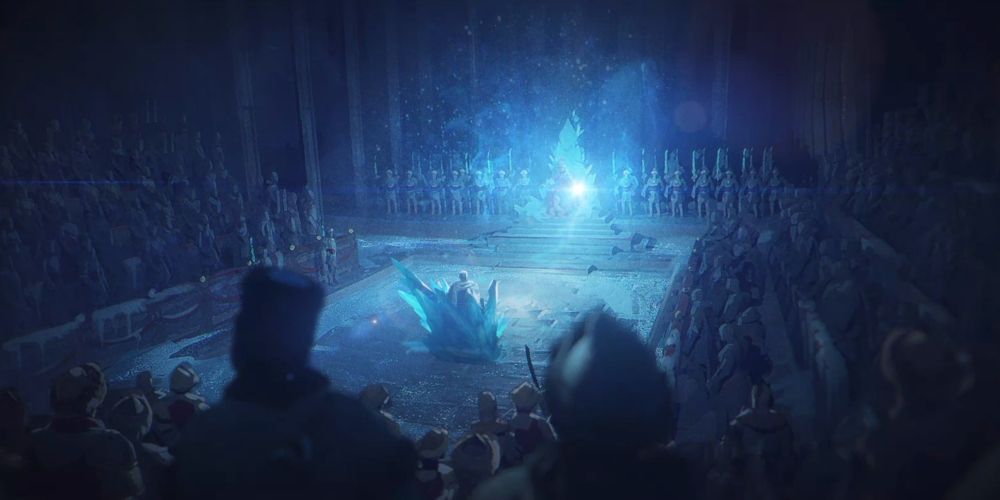 In addition to fending off the Chaos invasion and seeking to revive their god, Kislev's storyline focuses on the tension between the crown, represented by the Ice Court, and the church, represented by the Great Orthodoxy. Depending on which Lord you choose, you'll have to ensure that the nobility and populace of Kislev are on your side if you hope to unite the Tzardom against the forces of evil.

Whenever you defeat a Chaos army, you will gain Devotion – more if you sacrifice captured Chaos soldiers to the Kislevite gods. A small amount is also generated by constructing and maintaining religious buildings. The higher your Devotion, the less likely it is that Chaos armies will spawn in your territory. Hoarding Devotion won't do you as much good as spending it, though. By spending Devotion, you can invoke one of the four gods of Kislev and gain a benefit from their blessing for ten turns:

As the game progresses, your faction within the church will gain or lose Supporters. Katarin leads the Ice Court, while Kostaltyn leads the Great Orthodoxy. Reaching a threshold of Supporters will earn you powerful bonuses, and with enough Supporters, you can even overthrow your rival and seize complete control of Kislev's faith.

Atamans are a Lord type only available to Kislev that focuses on leadership and governance. Every two provinces completely under your control allow you to recruit and maintain one Ataman. Rather than gaining Skill Points, Atamans receive unique events that allow them to unlock traits based on the decisions they make.

Before you can recruit an Ice Witch – Kislev's spellcaster Lords and Heroes – they must go through a period of training at the Ice Court. When you decide to train a new Ice Witch, whether she is a Lord or a Hero, you will have input as to how her traits will develop until she is ready to be recruited. Kislev has powerful magic at its disposal, so be sure to have at least one Ice Witch in all your armies if you can.

Kislev has four tech trees. One can be researched at any time, but the other three are each tied to one of Kislev's great cities; Praag, Erengrad, and Kislev itself. You can only research a city's tech tree if you control that city. 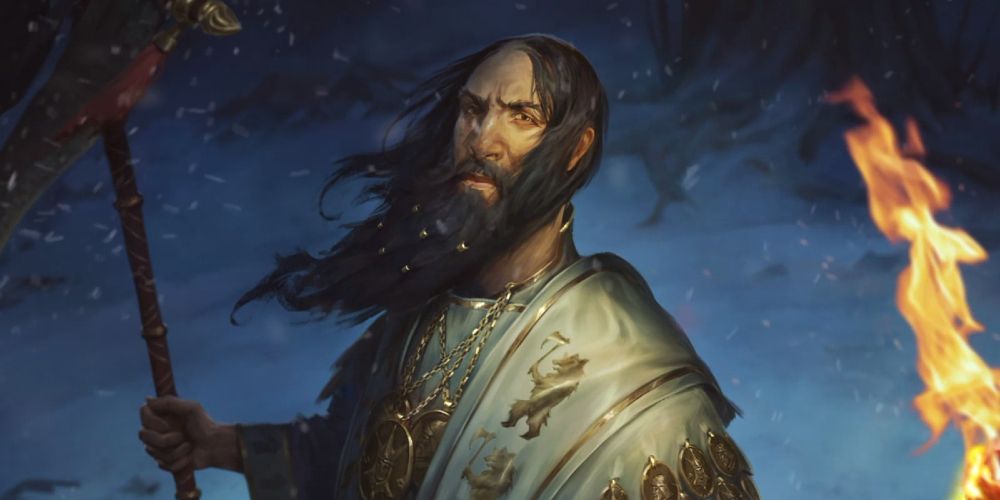 First-time players have the choice of leading Kislev as either the reigning monarch Tzarina Katarin or the fanatical Grand Patriarch Kostaltyn. Since she starts with control of the capital, a retinue of elite troops, and a more forgiving starting situation, we recommend playing as Katarin on your first Kislev campaign and this guide will focus on the early stages of her storyline. Kostaltyn excels with massed infantry, but his starting position is more tenuous – if you're new to Total War, leave him on the bench for the time being. 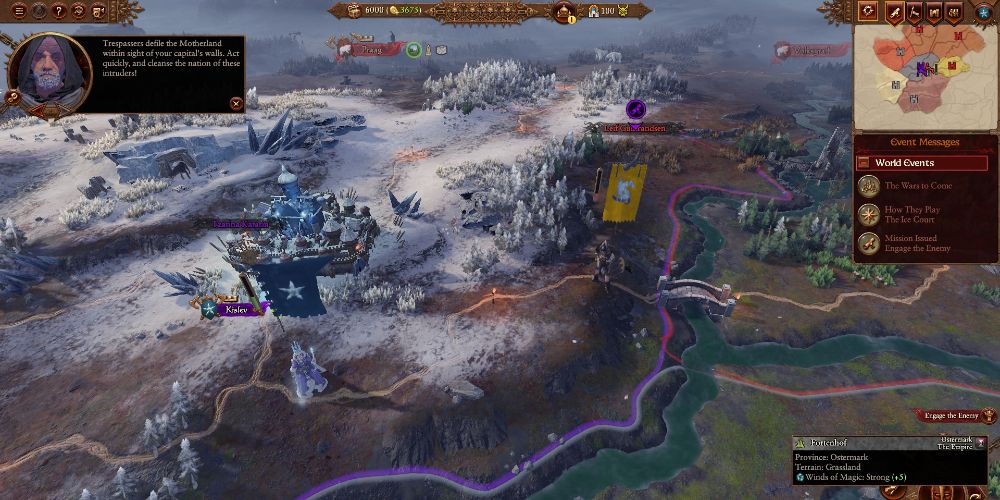 The first thing you do should be to destroy the Vanaheimling army east of your capital. Not only will this earn your starting army valuable experience, but it will also resolve your first Quest, earning you extra gold and a new Hero. You should be able to auto-resolve the battle and still win decisively, but if it's your first time playing Kislev this is a great opportunity to learn the capabilities of your forces without much risk.

The enemy force consists of a Marauder Chieftain, two units of Marauders, one unit of Marauder Hunters, and one unit of Warhounds. Deploy your Armoured Kossars and Winged Lancers on the flank opposite the Warhounds and have the rest of your infantry face off against the main enemy force with your Lord in the middle. We recommend having your Ice Guard in front, marching side-by-side, with your Greataxe Kossars behind, and your Snow Leopard on the flank.

Meanwhile, your main force will engage the Marauders. Have the Ice Guard charge once they're in range, each unit taking one Marauder unit. If possible, have the Snow Leopard move around the battle line to threaten the Marauder Hunters. Have one Greataxe Kossar unit assist the Snow Leopard while another supports your Lord in defeating the Chieftain.

Remember that most of your units carry pistols and wield magic attacks, so they'll need to be switched to Melee Mode before you can order a charge. This is toggled by clicking the crossed swords button under the unit bar.

When the enemy is broken and victory is yours, take the extra few minutes to run down the fleeing foe. Killing the entire army will prevent them from coming back to haunt you later. Don't worry about honor – these are Chaos Marauders, and they'd do the same to you.

Keep an eye on your Snow Leopard – if it gets into a one-on-one fight with the enemy Chieftain it's likely to die. Send troops to support it or have it pull back – on four legs it's more than capable of outrunning the Marauder.

After you've driven off the enemy army, you can set about preparing for the long, hard campaign. There's a lot to do, and ensuring you complete all these tasks will give you a stronger start:

Your early units will consist largely of Kossars, so researching Hooked Axe Blades immediately will give you an edge in combat until it's time to recruit higher-tier units. After that technology is finished, follow it up with Ice Court Indoctrination to unlock an Ice Witch training slot. As soon as it's finished start training a new Ice Witch Lord to lead a second army.

Use your two recruitment slots to train two units of Kossars. They'll provide a little more all-around punch than Spearmen, who are better used when facing cavalry or large creatures like trolls. Be sure to use local recruitment (the bottom row) rather than global recruitment to save money. Once the Chataz is completed (see below) you can start recruiting Armoured Kossars exclusively unless you need to save money.

Defeating the Vanaheimlings will also earn you a new Hero who spawns next to your capital. Send them to join your Lord's army to complete another Quest and get a free 500 gold. When she earns her first Skill Point, give her Scouting to increase your chances of finding magical weapons after a battle.

Build Up Your Capital

There are two building slots available at Kislev; upgrading your economy early will give you more to work with in the long run, so we recommend filling these slots with a Stall (which provides direct income) and a Hunting Camp (which produces furs for you to trade with your southern neighbors and reduces recruitment costs for Kossars). You can also upgrade your Kossar Hut to a Chataz, allowing you to recruit Armoured Kossars once it's finished.

While you're ordering construction, be sure to Commandment at your capital using the button in the lower-left corner of the screen. We recommend Relief Columns, as this reduces the recruitment cost of units. It won't affect the units you recruited this turn, as Commandments take effect the turn after they are chosen, but it will streamline the expansion of your army.

You should be able to establish a Trade Agreement with at least one of the Empire provinces to the south, such as Ostermark. If not, check back every few turns to see if they've changed their mind. You can also establish trade and possibly military access with the nearby Kislevite boyars, with an eye toward eventually absorbing them. If a potential trade partner wants gold in exchange for the agreement, wait until around Turn 4 when you'll receive a Quest to negotiate new Trade. Completing the Quest will offset the cost of sealing the deal and earn you a War Banner to boot.

Chances are your Lord will have gained a Rank in the starting battle. Inspiring Presence is a good starting pick as it's useful in almost every situation and unlocks useful unit buffs like Firing Drills.

Before ending your first turn, you'll also need to choose one of the Kislevite gods to invoke. Since you're building out your capital, Dazh is a good choice. The god of fire and the sun will boost your income and bring Supporters to your cause whenever a building is finished. 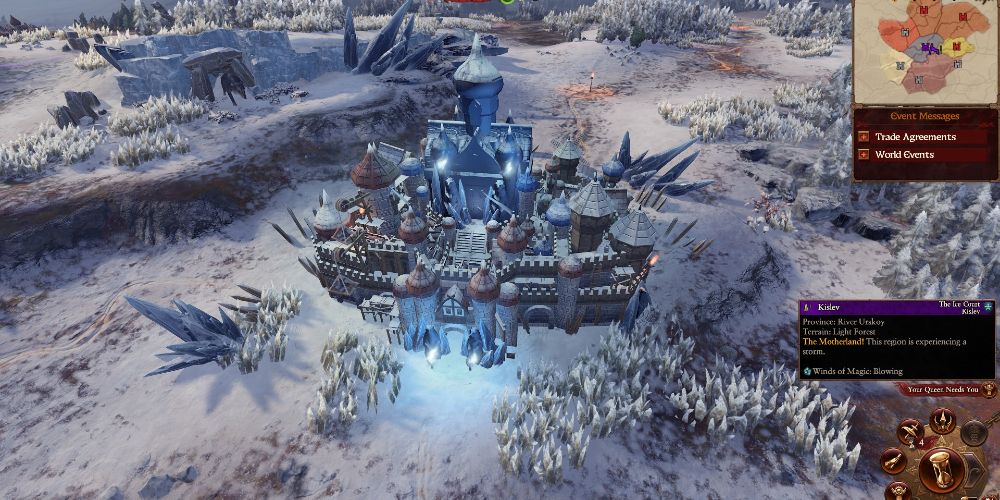 The turn after defeating the Vanaheimling army, you'll receive a Quest to take the eastern town of Gerslev back from the invaders. March east and lay siege to the settlement. While you're waiting for your enemy to starve out you can continue developing your relations with your neighbors, expanding your capital, and building a hefty treasury. If a Chaos army spawns while you're sieging Gerslev, don't panic; once Gerslev's forces are reduced by about half you can assault the settlement then backtrack to fight off the invaders.

You'll eventually need to defeat Kostaltyn and the Ropsmenn Clan to secure your position as supreme ruler of Kislev. Defeat the Ropsmenn Clan with military might; once Gerslev is taken, take nearby Igerov and Volksgrad, then finally Praag to gain total control of the Eastern Oblast.

If the Orthodoxy gets aggressive you can fight them in border skirmishes, but it's more efficient to try and annex them through Supporters. Once you can support a second army (ideally led by an Ice Witch), keep one at home to keep your settlements secure and send the other forth to do battle with Chaos, keeping an eye on your Devotion and Invocations until you have enough Supporters to force Kostaltyn into submission. From there, diplomatically annex the last of the boyars to finish uniting the Motherland, then begin your quest to reach the Forge of Souls.