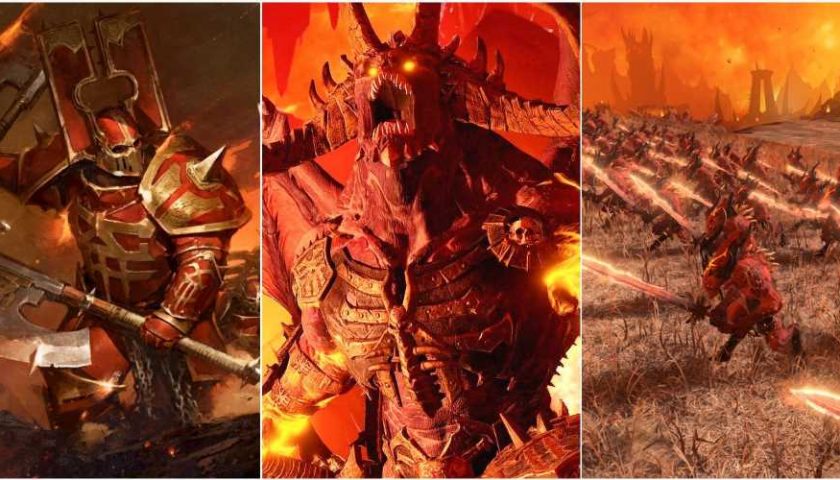 Are you looking for the best and most cost-effective units for your Total War Warhammer 3 Khorne campaign? Then look no further than this list! After thoroughly analyzing all 18 Khorne units in both campaign and custom battles and various difficulties, they were compiled into this tier list.

From the S-Tier (superb) to the C-Tier (not recommended), you can use this as a guide when building the perfect army to defeat any stragglers that your plagues haven't already dealt with. And if you do end up in a serious battle, your troops will outlast the enemy and come out on top – if you follow these guidelines, that is. 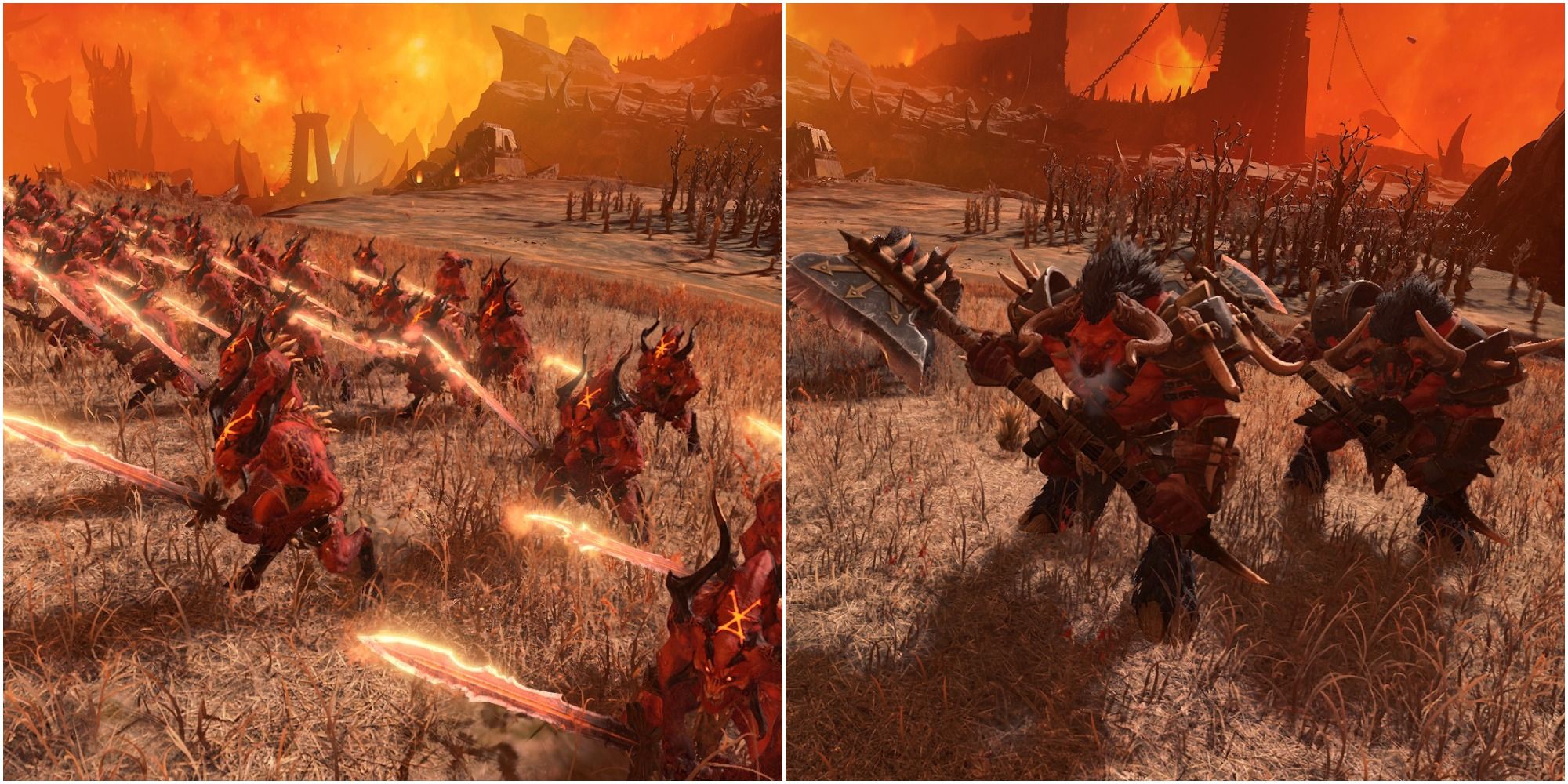 These Bloodletters are very good for a tier 2 unit, and you can obtain them from the start of the campaign. Thanks to their anti-infantry bonus and armor-piercing attacks, they can defeat most tier 2 and even tier 3 infantry units. Their magical attacks let them bypass physical resistance. Bolster your frontline with these Bloodletters, or use them as a flanking force.

While the default Bloodletters are already very good, the Exalted Bloodletters of Khorne may just be the best infantry unit in Warhammer 3. They will come out on top whether you pit them against the Celestial Dragon Guard, Tzar Guard, or Exalted Daemonettes. In a way, this makes sense, as Khorne's army is lacking in both ranged and missile units, and is supposed to be the strongest army in terms of its melee capabilities.

Almost every unit in Khorne's army is very effective against infantry, so you will have no trouble obliterating masses of enemy infantry. What might trouble you though, are enemy large units, such as the Terracotta Sentinel, or the Great Unclean One. This is where Minotaurs with Great Weapons are the perfect solution. So, you should strive to always have a few of these in your army. 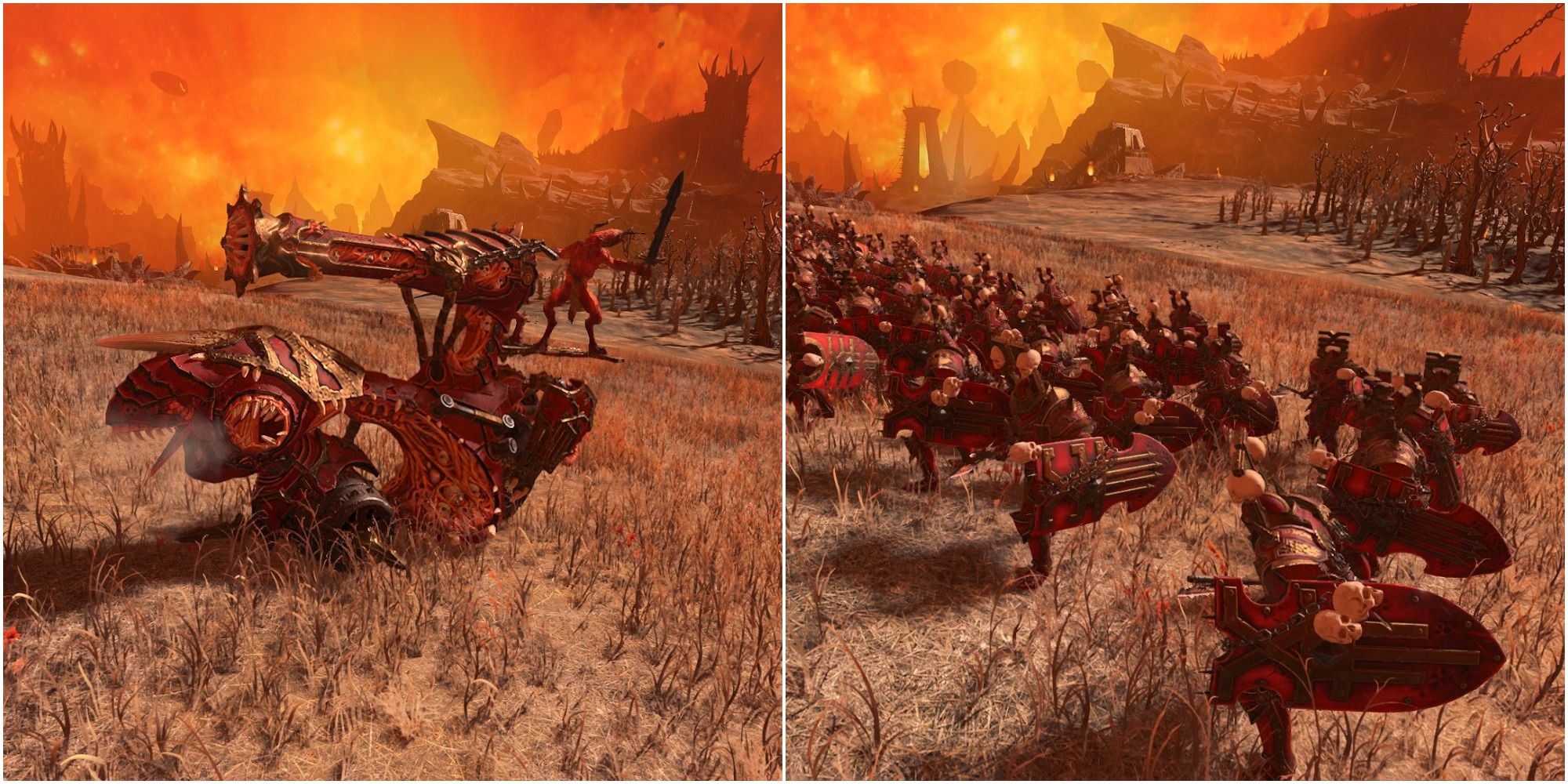 This war machine is a hybrid unit, like Kislev's Little Grom, that works well at both ranged and melee. Once you run out of ammunition (skulls) for this gun, it can replenish its ammunition in melee combat, which of course means collecting skulls. The Skullcannon also comes with the Gorefeast ability, which lets nearby units regenerate health. The downside of the Skullcannon, and the reason that it barely misses being an S-Tier unit, is that it is very micro-intensive.

This is the only infantry unit in Khorne's roster with shields. For its price, it's great and will last you a long time as a frontline unit. Eventually, you will want to replace them though, with units such as the Exalted Bloodletters and Minotaurs with Great Weapons.

Besides the Chaos Furies, who are rather fragile, this is your only flying unit as Khorne. Since you are also lacking in the ranged department, you want to avoid being particularly vulnerable to armies featuring a lot of (ranged) flying units. Therefore, your Bloodthirsters carry a lot of responsibility. While it is somewhat disappointing versus large units, it would be quite the risk not to have Bloodthirsters, and they are still more than good enough versus flying, missile, or artillery units to justify their cost.

This unit works somewhat similar to the Minotaurs with Great Weapons, but you can get them sooner. Khorne is lacking somewhat in the anti-large department. So, if you cannot field Minotaurs yet, these Chaos Warriors with Halberds are a solid choice to deal with large units or to protect your flanks from cavalry. Their charge bonus is mediocre, and they have a charge reflect ability, so they work better defensively, rather than offensively.

This Gorebeast is the only chariot in Khorne's army. It is heavy and mainly good to charge into ranks of infantry. Their role can also be fulfilled by (Exalted) Bloodletters or cavalry, but if you are a fan of chariots, you cannot go wrong with this one.

These warbeasts are quite a bit stronger than the Chaos Warhounds. They also come with high spell resistance and are thus very good against spell casters. You can also use these to harass enemy missile units or for hammer and anvil tactics.

This is the strongest cavalry unit in Khorne's roster. It has very high armor and is a great shock cavalry unit, which you typically won't use until the end of the campaign. While Bloodcrushers do have their uses, in most cases you are better off using Skullcrushers instead.

This mobile altar has a high mass and can be almost as good as Khorne himself to move through enemy ranks as if they are not there. It also has a high speed, empowers your units and boosts their morale, and is a pretty decent melee combatant in its own right. 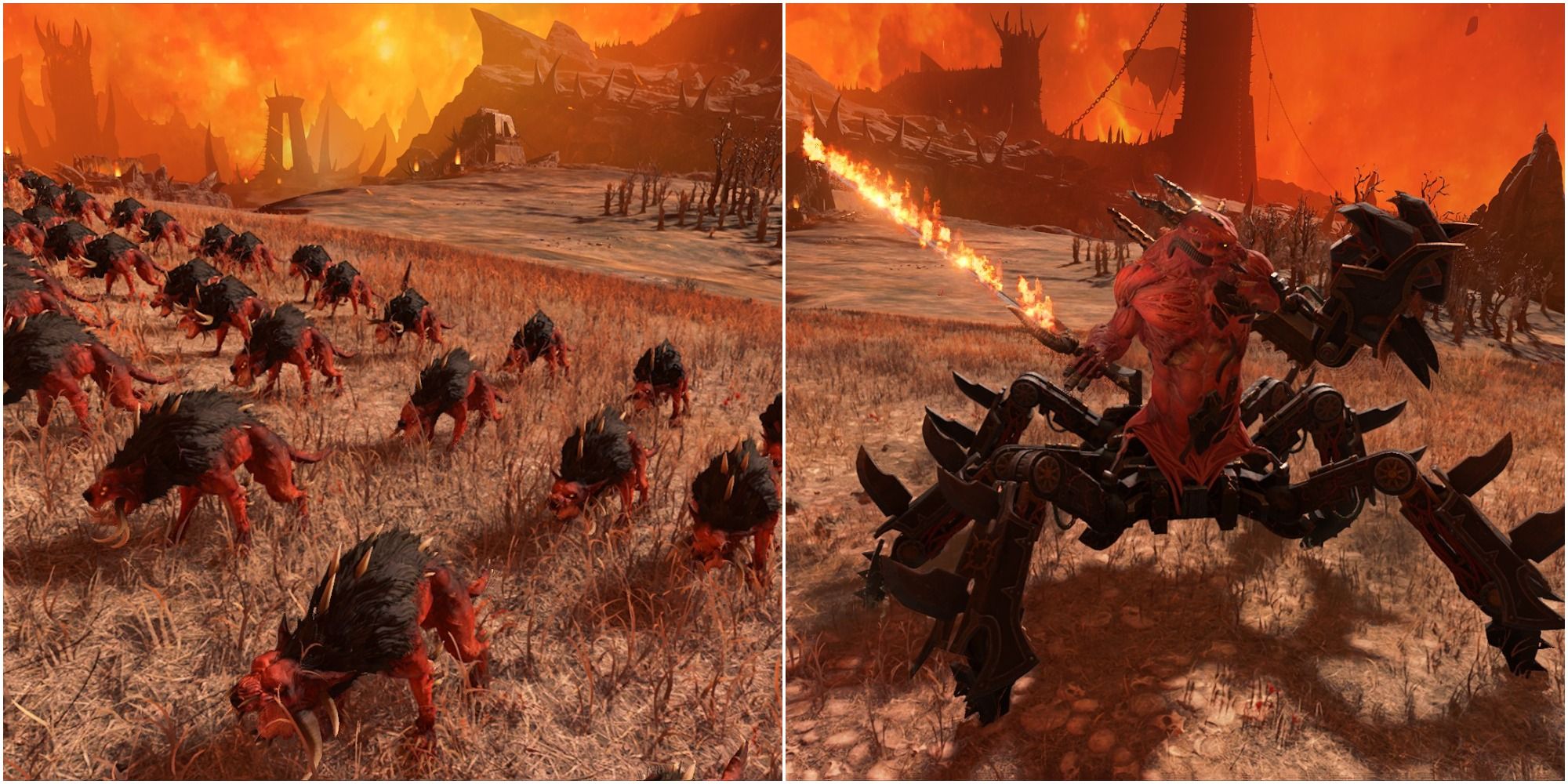 Much like the Spawn of Nurgle, this is an unbreakable monster unit with high health. It can be a good addition to boost your frontline and help it hold, no matter the odds. It fits Nurgle's playstyle a bit better and is less needed in Khorne's army.

The Chaos Warhounds are rather fragile but, like all fast units, are good to harass enemy ranged units. Flesh Hounds of Khorne fulfill a similar role though and are much better at it, so that pushes these Warhounds to B-Tier.

The Chaos Furies fulfill a similar role as the Chaos Warhounds. They have the additional benefit in that they are one of only two flying units for Khorne. So, together with the Bloodthirster – or until you can get the Bloodthirster – these can be a useful addition to your army. Ultimately though, they are too weak to deserve a spot in your mid-to-late game

You start the campaign with some Bloodcrushers, and they will certainly help you in many of the early battles. However, this cavalry unit is outmatched by the Skullcrushers, so you will want to replace them eventually. Note that Bloodcrushers are unable to rout and have magical attacks, which does set them apart somewhat from the Skullcrushers.

These Minotaurs of Khorne are a good unit, but there is no reason to take them over Chaos Warriors or Bloodletters. If you are going to recruit minotaurs, the Minotaurs with Great Weapons are a much better choice.

Khorne does not have any units that belong in the C-Tier.