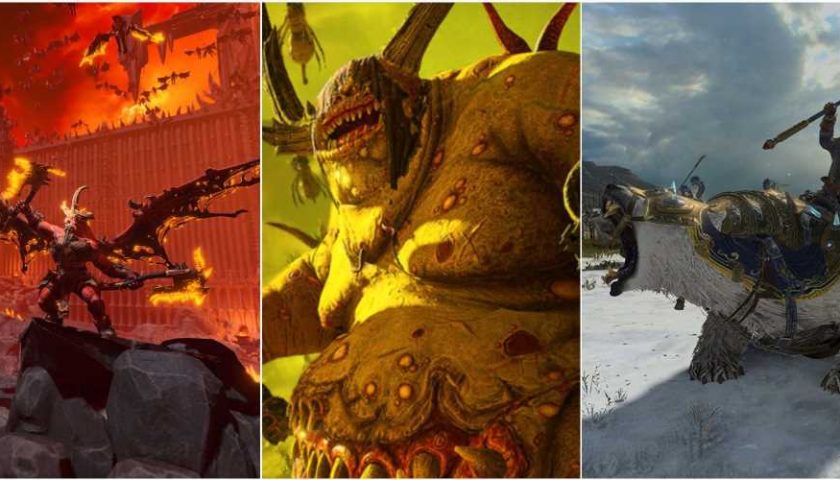 Total War: Warhammer 3 launched with eight playable factions to choose from. Kislev and Daemons of Chaos are recommended by the developers for a first campaign, which may not be the best choice, but more on that later. In this list, all factions are ranked based on how strong their units are in the single-player campaign, although comments are also added to explain how beginner-friendly these factions are.

So, forget about economy or diplomacy. These are the factions with the best army rosters that you can use to dominate your enemies and, as they say in Warhammer terms, paint the map with. The order is from the weakest to the strongest. 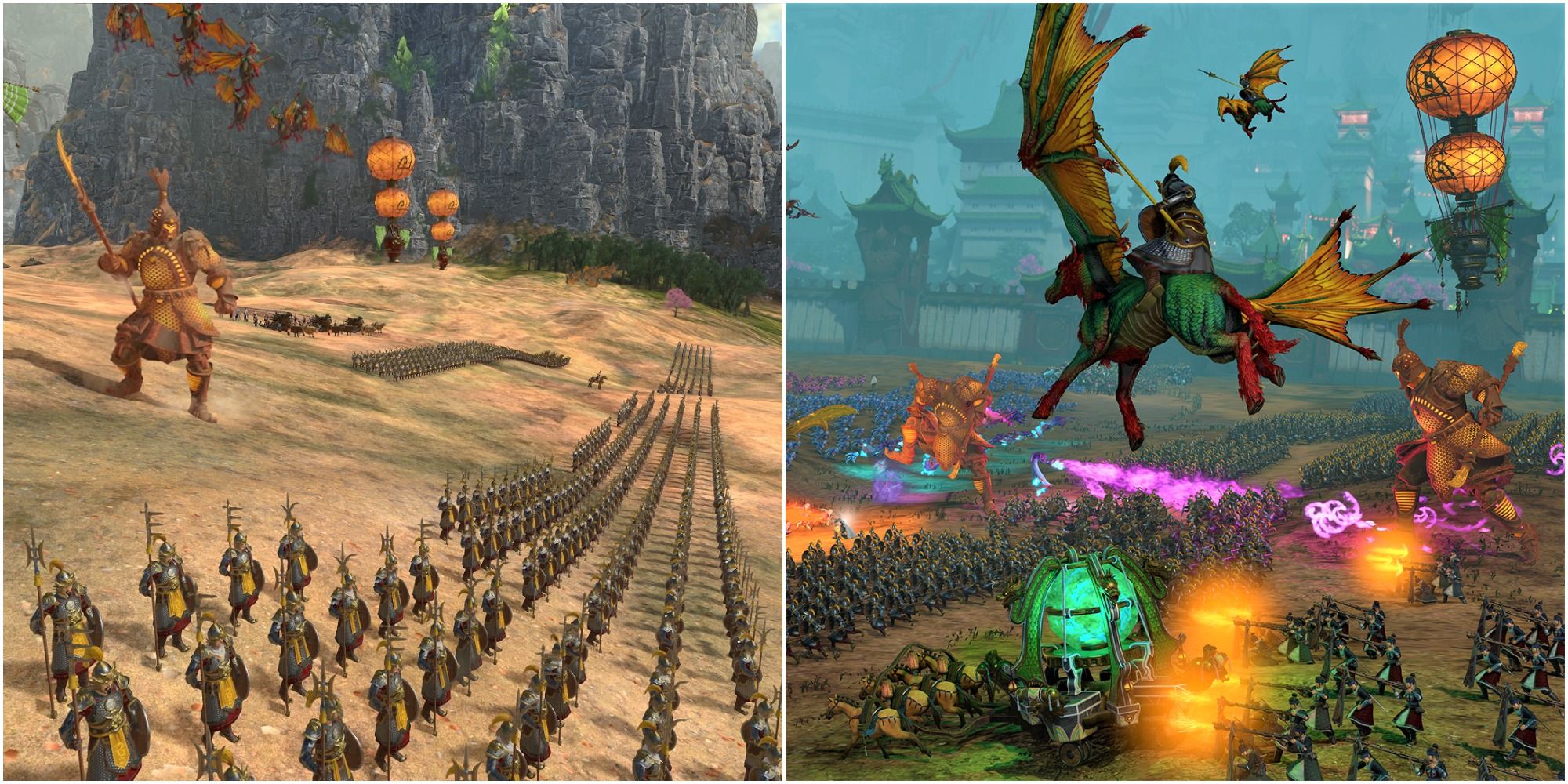 While Grand Cathay has the weakest army roster, their campaign should have been recommended for a beginner to Total War. This is mainly due to the Great Bastion – Total War's version of the Great Wall – and your strategic goals. After taking out some rebels, the Great Bastion becomes a fantastic choke point. This makes Cathay's campaign easier than Kislev's, where you will be surrounded and harassed from all sides.

Despite this, Cathay gets the last spot on this list because their army is the most underwhelming. Even your basic units, such as peasant archers and peasant horsemen, pale in comparison to their Kislev or Old World counterparts. Your entire army also depends on a Yin-Yang harmony to work properly, which means staying in formation. If your formation gets broken apart, it can all come crumbling down. While it is not difficult to play as Cathay and Jade Warriors can certainly get you very far, do not expect anything exceptional here. 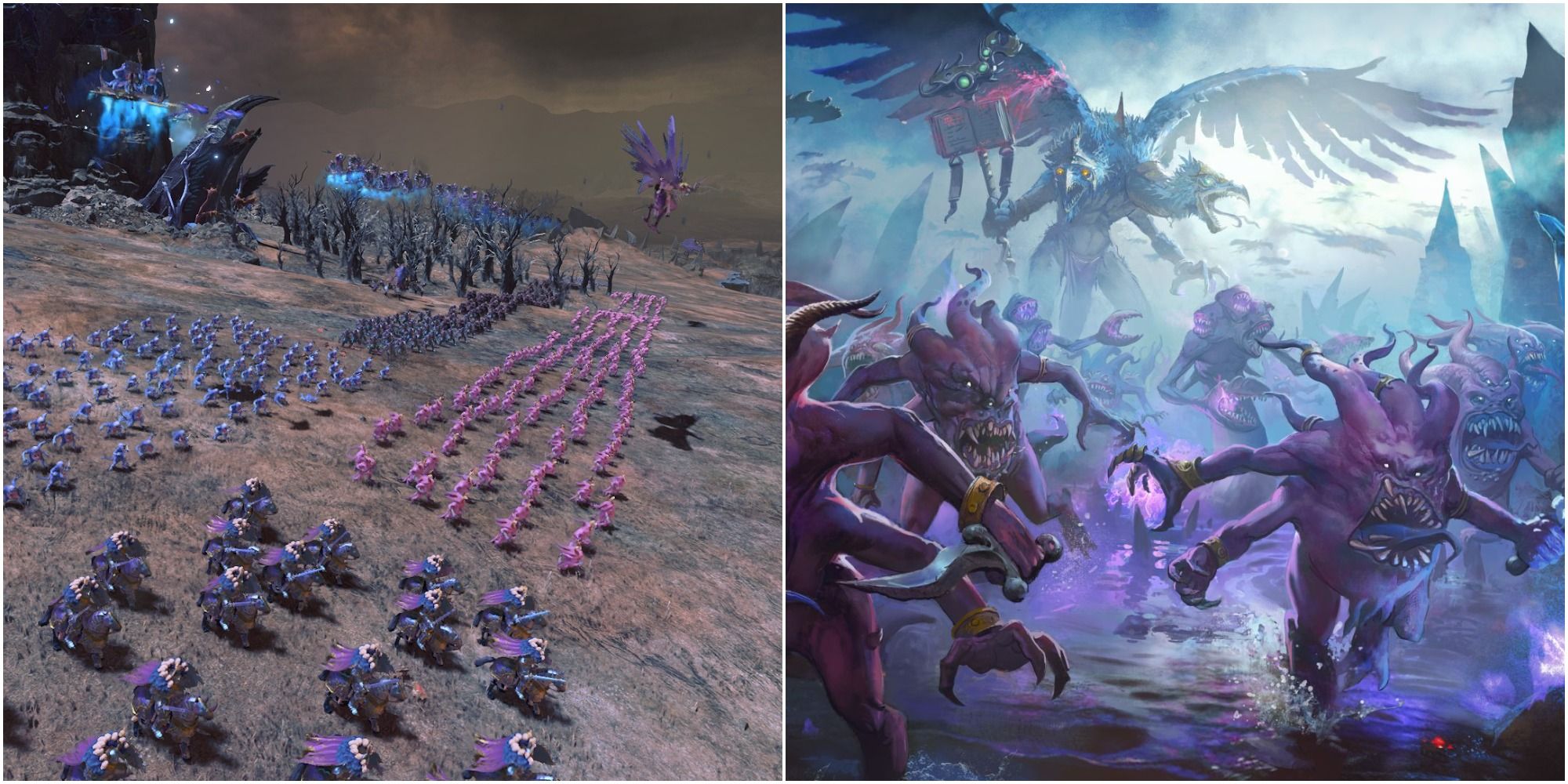 Tzeentch is a fun lord with a unique playing style. He is a bit like Littlefinger from Game of Thrones, always scheming and plotting, but with magic and a lot more craziness. Tzeentch's main abilities in the campaign are that he can alter the strength of the Winds of Magic in a province, and eventually teleport his armies.

In battle, Tzeentch's army relies heavily on magic, as well as hit-and-run tactics. Most of his units are glass cannons: fragile, but capable of dealing a lot of damage. This means that a lot of intensive micromanagement will be needed to properly employ Tzeentch's army in battle. If you are a veteran Total War player, this may be one of the strongest factions, but for the average player, it can be a struggle to compete against the other factions. 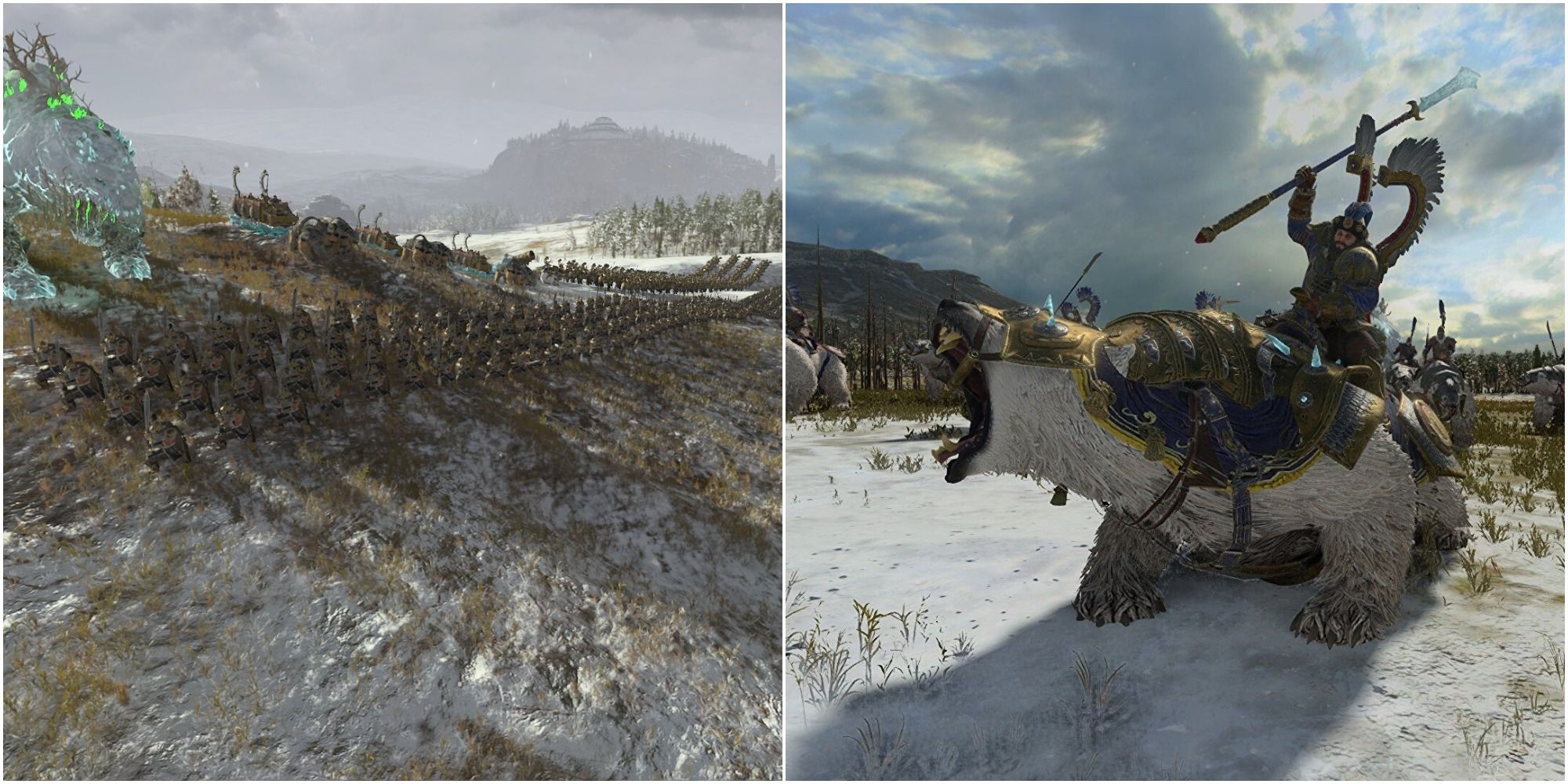 Kislev, despite being recommended for new players, can be an unforgiving and hard campaign. Your lands are stretched out wide and your enemies will be coming from all sides. It also takes a while before you can recruit the best units, such as the War Bear Riders, Streltski, and Little Grom. Then there is the Elemental Bear, who only shines when you have unlocked Boris Ursus.

In battle, it looks a lot better for Kislev. Their main advantage is that they have a lot of hybrid units. While you normally need to be careful with your artillery and missile units, as Kislev, they are capable of surviving in a protracted melee. This makes Kislev's army quite beginner-friendly and allows you to make mistakes. Even in the heat of battle, Kislev often has a way to come out on top. On the other hand, they lack any units that are truly the best in their respective fields, so there is nothing extraordinary here either. 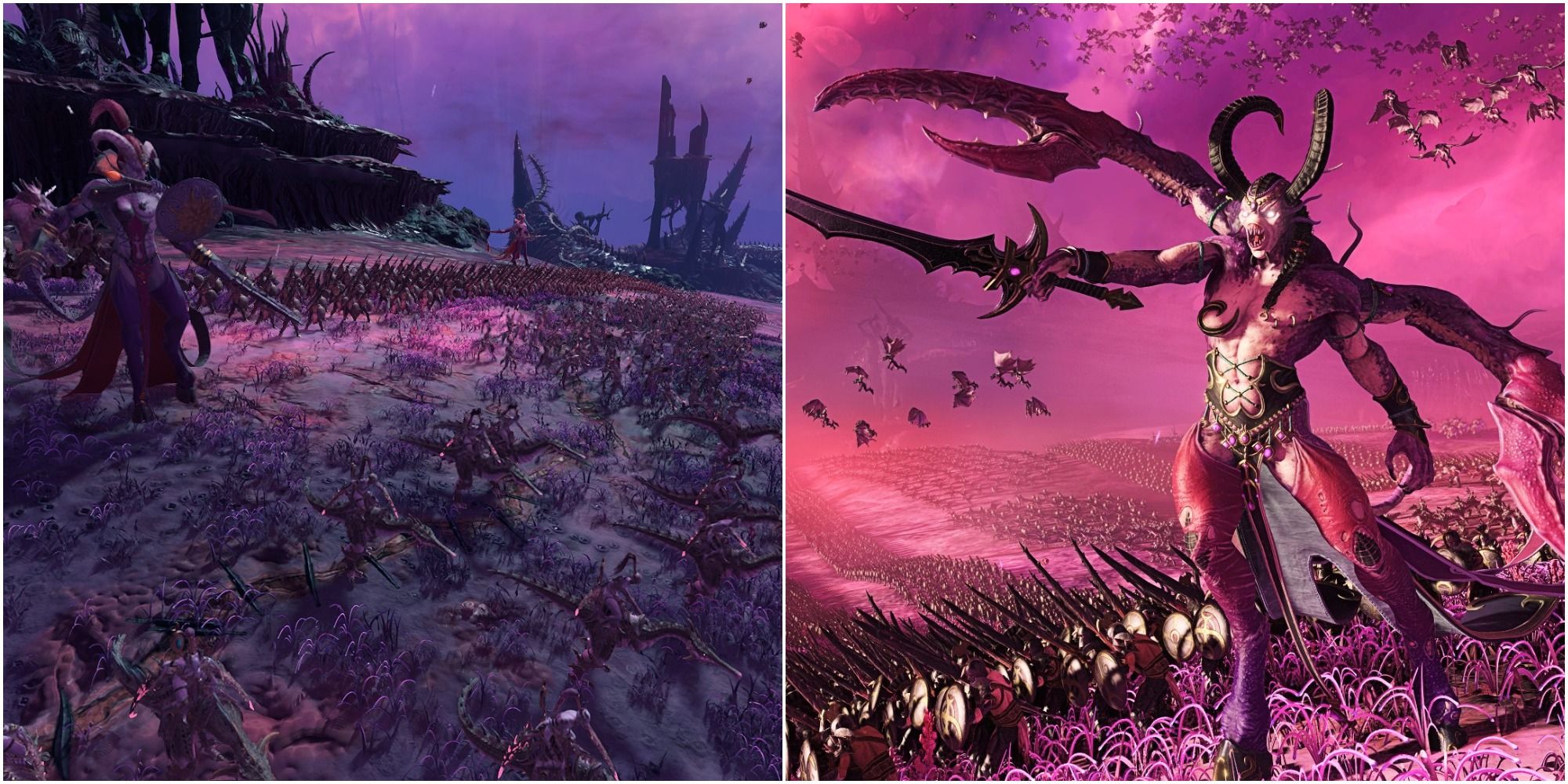 Slaanesh's army is comparable to Tzeentch. It relies heavily on maneuvering, speed, and hit-and-run tactics. A key difference is that Slaanesh utilizes melee combat a lot more, rather than magic. Slaanesh features seven different cavalry and chariot units, whereas Tzeentch only has three. Slaanesh also lacks any missile units whatsoever, even their chariots and monsters do not have a ranged attack.

Even more so than Tzeentch, Slaanesh's roster is the very definition of a glass cannon army. This is advantageous because you can truly focus all of your attention on delivering surgical strikes and flanking maneuvers. The lack of missile units and limited focus on magic makes micromanagement a lot easier. In the hands of an average player, Slaanesh's army will likely be stronger than Tzeentch's. 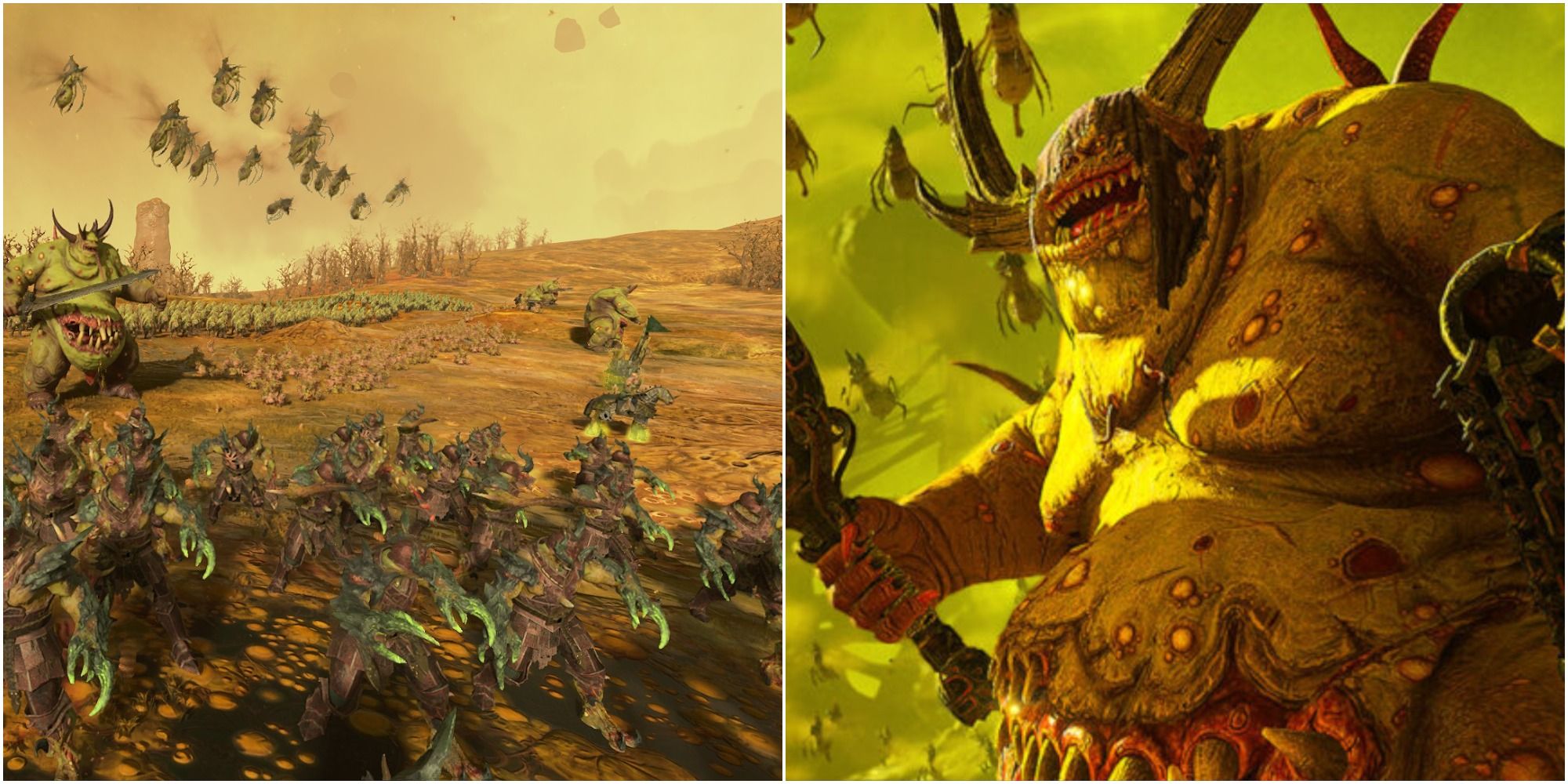 Nurgle the Plague God is one of the most popular factions from Warhammer fantasy, and rightfully so. Their units are even crazier than the Skaven and are all linked to various plagues and other diseases. Gameplay-wise, Nurgle is closer to the Dwarves though. If you like to play defensively, you should consider playing as Nurgle. All their units are both slow and sturdy and prefer to win their battles through attrition.

As Nurgle, you win your battles by enduring whatever the enemy can throw at you, and coming out on top in the end. Nurgle has only two missile units and no cavalry, although it does employ eight different types of (flying) monsters. Your main weakness is getting overwhelmed or flanked by missile and cavalry units. So, keep some war beasts and flying units on reserve to deal with surprise threats. Though, against mixed armies, Nurgle will dominate the battlefield. 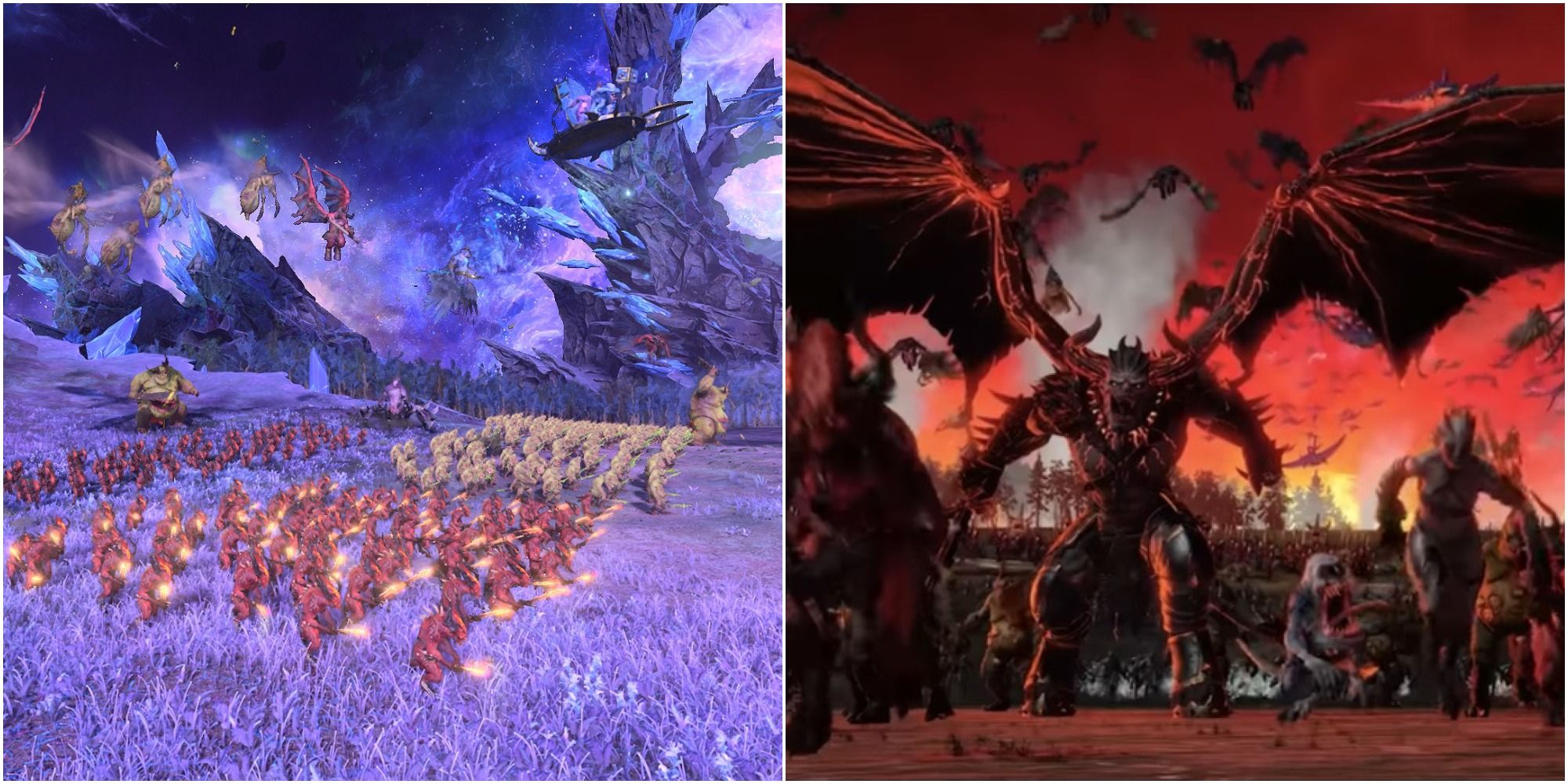 Daemons of Chaos is recommended for beginners by the developers, but this was a mistake. While their army is strong, hence the third spot on this list, the campaign can be very difficult. This is mainly due to their starting position. There are a lot of enemies nearby that will come looking for you, and it is easy to get overwhelmed. Some players may like this challenge though, as well as the fact that your Daemon is fully customizable and becomes increasingly stronger throughout the campaign.

As for their army, Daemons of Chaos feature a roster that combines all the other Chaos units. So, that means every unit from Nurgle, Slaanesh, Khorne, and Tzeentch can be recruited in your army. Suffice to say, this gives them the most diverse army roster of all factions. Why do they not get the first position on this list, then? Well, apart from the hard campaign, there is also the unfortunate downside that it takes a lot of time to unlock their best units, so you will not be able to field them until late in the campaign. 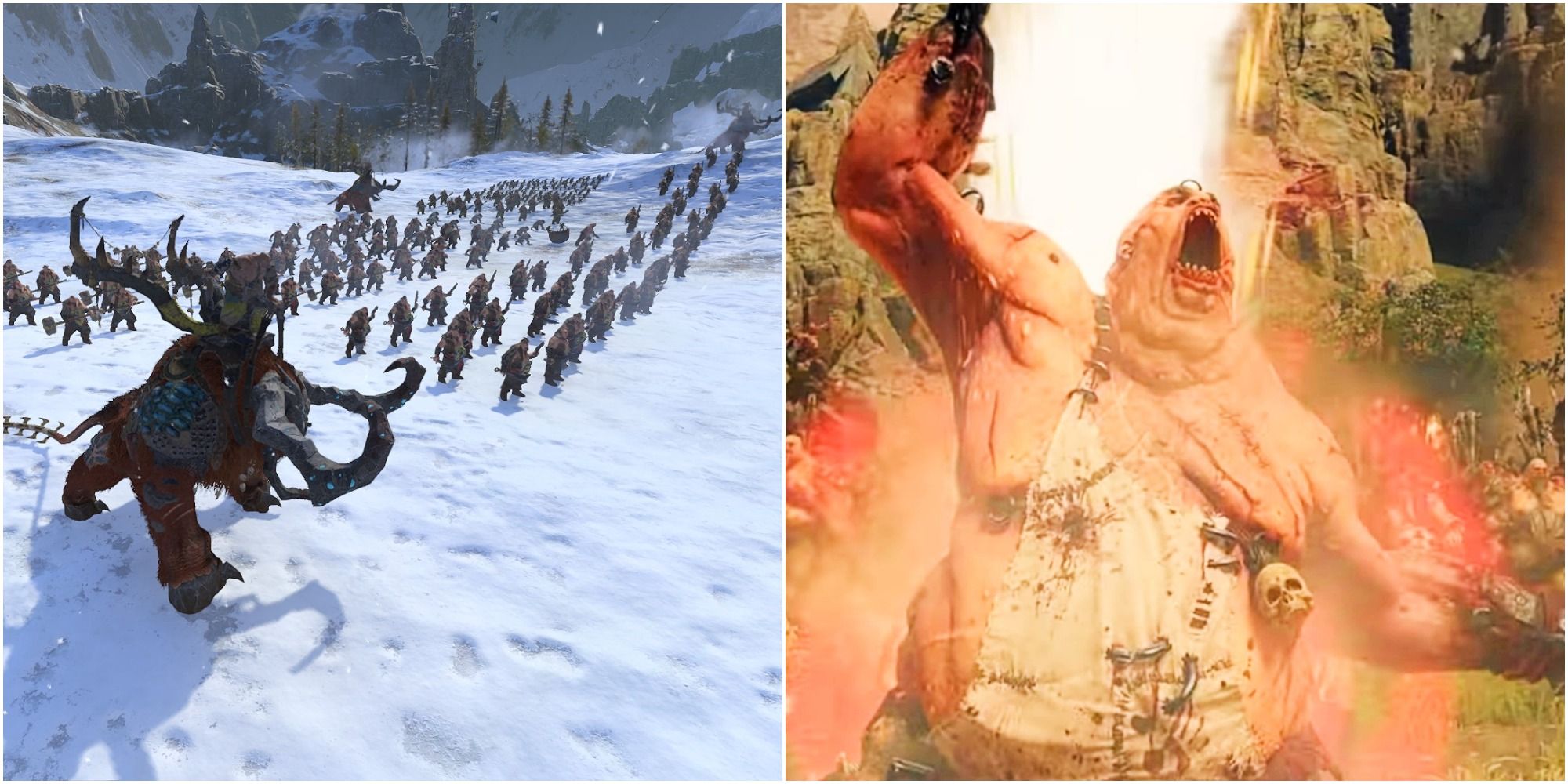 The Ogre Kingdoms were already teased in Total War: Warhammer 2, but now they are a full-fledged faction with two legendary lords. Their strength in the campaign depends on whom you pick as your lord. If you opt for Skrag the Slaughterer, you will have one of the easiest and most dominating campaigns in Warhammer 3. Not only do you start in the corner of the map, so you have few threats to deal with, but you also gain lots of bonuses to your Gorgers units, who can become very powerful.

The Ogre Kingdoms also field one of the most powerful artillery units in the game, the Ironblaster, with tremendous range and capable of dealing extremely high damage. This artillery gun allows you to dictate the terms of the field of battle and then your powerful monsters and cavalry can decide when and where to strike. 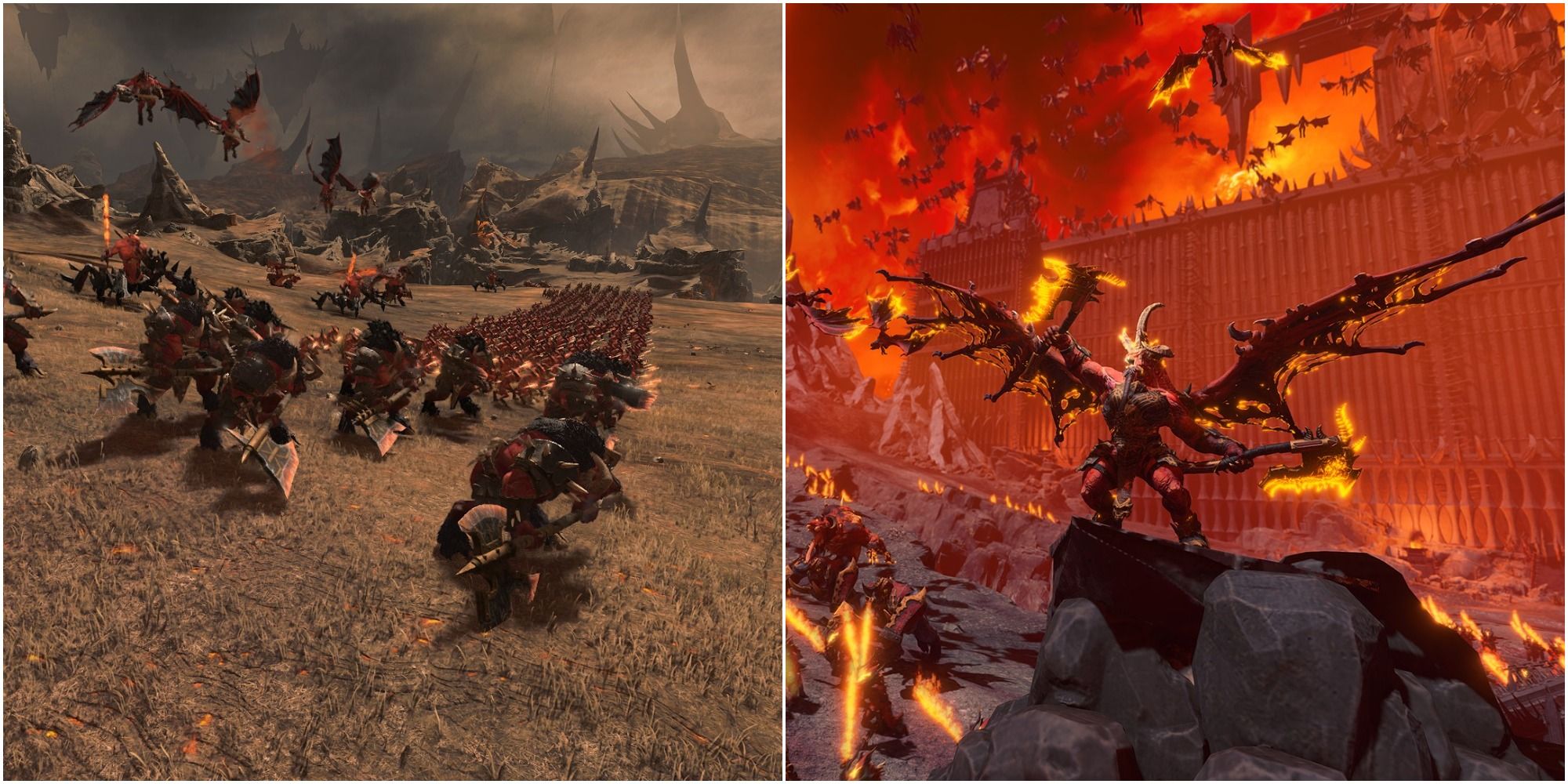 Khorne should have been the second recommended faction for beginners, rather than Daemons of Chaos. A simple reason for this is the leader himself: Skarbrand the Exiled. He quickly becomes a supremely powerful melee fighter, who can almost win your battles for you. Think Tyrion with the Sword of Khaine. You will never get tired of watching Skarbrand rage through enemy ranks.

Khorne also features the best melee infantry in the game: the Exalted Bloodletters of Khorne. These Bloodletters can defeat any other infantry unit in a direct duel. Thus, while lacking missile infantry (but who needs those?), Khorne can employ the strongest line of infantry, backed by decent artillery, while also having lots of powerful cavalry, monsters, and flying units to choose from. If you want to revel in chaos, Khorne is the clear winner in Warhammer 3.