The concluding season of Game of Thrones is now behind us. And if you watched, you’re sure to have an opinion about how it all turned out. Dire Wolf Digital’s recent release of Game of Thrones: Oathbreaker gives you the chance to see it all play out again, almost certainly with a new ending, but with your gathered friends cast in the roles of the conniving lords and ladies of Westeros, along with all the lying, backstabbing, and trickery you’d expect.

Oathbreaker is a social deduction game built to be played by five to eight players. The high player count means that it’s best suited for a larger get-together, perhaps as the main course in a board game night of other fun but lighter party games. An individual round plays out in around 45 minutes (presuming you don’t get too bogged down in discussions about who is a traitor), but I suspect many play groups will recognize the potential inherent to multiple playthroughs in succession, letting the winners of one session dictate the power structure of the subsequent attempt to control the fate of Westeros. 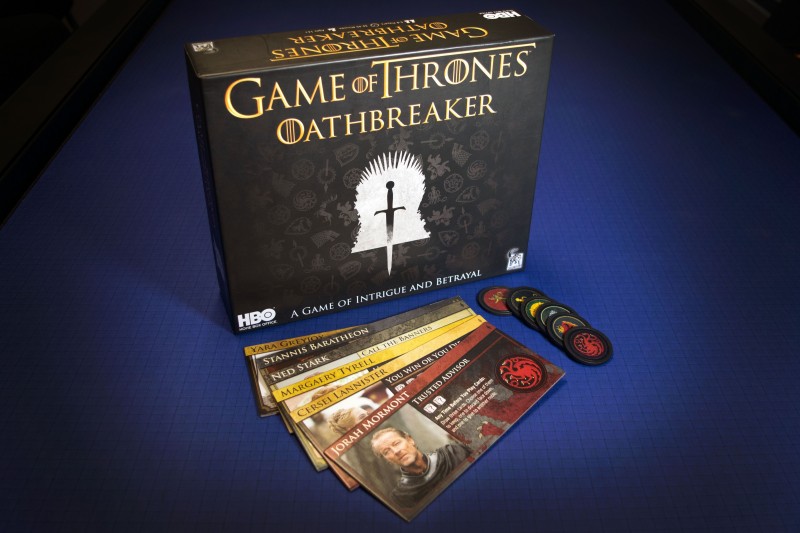 While the game’s focus on deception and deduction are welcoming to any player, it should come as no surprise that being fans of the show (or, at the very least, the books) makes the experience far more rewarding. In addition, be conscious that the game demands lying, underhanded statements, and trickery from almost all the players; that won’t be the right fit for every gaming group, so bear that dynamic in mind when you consider ideal play groups.

Bluffing games are a familiar fixture of the party game scene. Fun releases like The Werewolves of Miller’s Hollow and Avalon can offer many hours of laughter and lying. Oathbreaker distinguishes itself through the asymmetric nature of the player roles. A single player always takes on the role of the king or queen of the kingdom, while everyone else adopts the role of recognizable nobles from the Game of Thrones universe. Some of those nobles will be designated to remain loyal to the sovereign. But in every game session some of those nobles will secretly be conspirators working to sow chaos in opposition to the king or queen’s rule. Figuring out who is who is key to winning the game. 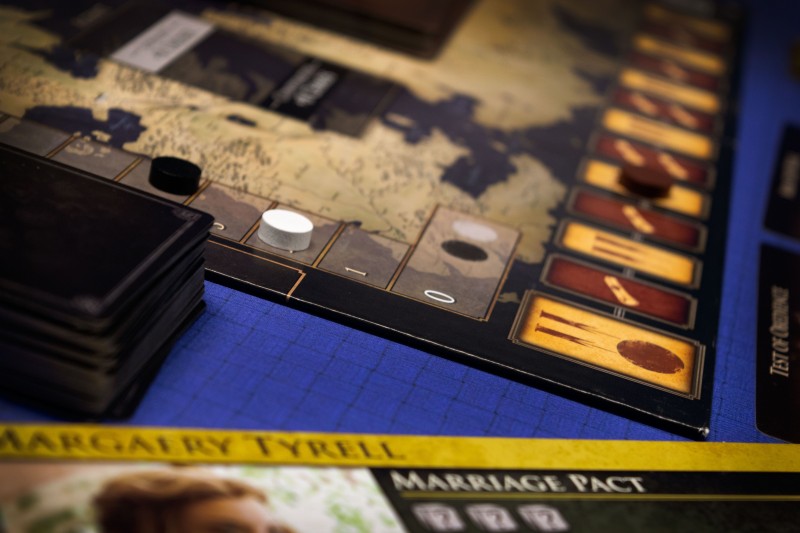 The game unfolds through a series of missions, which usually reflect recognizable moments and events from across the Game of Thrones fiction. Perhaps the Battle of the Bay unfolds in one round, while in another there’s an effort to hire the Faceless Men. Each noble carries a hand of cards that can be played onto missions, and each card exhibits various icons. No matter the situation, each mission can only be completed if the correct type of influence icons are played onto the mission (represented abstractly by Crowns, Ravens, and Swords). A completed mission means greater order in the land, and a step toward success for the sovereign and their loyalists.

Meanwhile, Sabotage icons counter that influence, helping the conspirators undermine the king or queen, and ensuring the failure of the mission. Whether you play helpful influence or unhelpful sabotage, it’s all done in secret. Cards are played face down. When those cards are revealed, that’s when the real discussions begin, as everyone begins to charge each other with treachery. Is Arya a traitor to the crown because she didn’t help out more in the attempt to rout the Wildlings? Did Tyrion manage to trick the conspirators from playing cards to a mission by adding all those helpful cards to the mission, or was he just trying to regain the queen’s trust after the blatant sabotage he committed in the previous round?

Over time, the king or queen is given their own opportunity to sway events with decrees, especially ones that bestow favor or suspicion onto a given noble. Do you dare to help Ned Stark in a subsequent round after the king has marked him as duplicitous the round before, or are you dooming your house to fall as well? 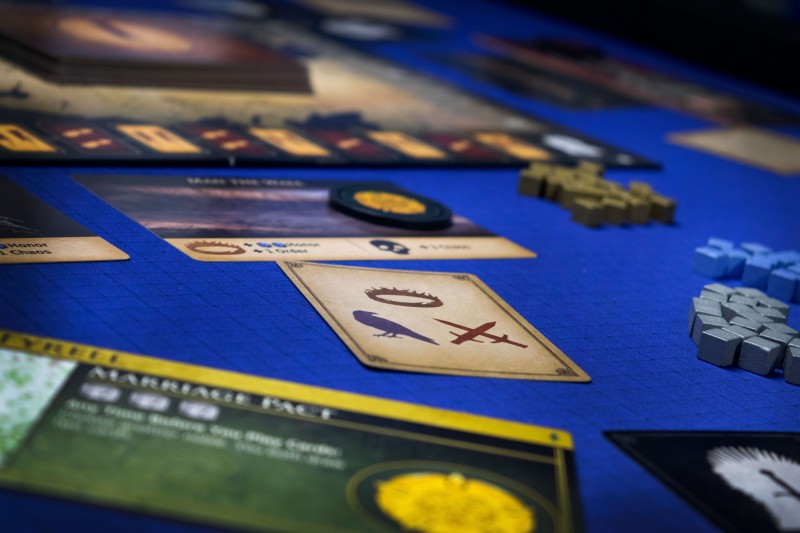 At the end of the game, the success or failure of various missions helps determine whether chaos or order reigns, but the ruling player also gets to make guesses about who was and wasn’t loyal, which can further adjust the scoring. In addition, favors and suspicions played on each player can add order or chaos to the track.

And in one final twist, every noble has also been harboring a secret ambition. Even if your side (loyalist or conspirator) has come out ahead, you only personally win if you also fulfill your ambition, represented by a secret card you receive as the game begins. Perhaps you have been gathering honor to be like Jon Snow, or you are power-hungry like Cersei Lannister. The various missions you’ve been involved in net you these resources, like coin and power, so it’s yet another variable that must be factored in if you want to be one of the winners.

Taken together, Game of Thrones: Oathbreaker offers a deeper bluffing gameplay loop than many similar games, with far more factors to monitor. The king or queen must juggle constantly shifting alliances and actions by every player at the table. Each noble must be judicious in their use of cards. Loyalists must find ways to really prove their fealty, especially because the conspirators are actively trying to shade their every action. Meanwhile, conspirators must simultaneously sabotage enough missions to bring down the king or queen, but still find ways to gather the resources they personally need to win at the end of the game. There’s a fascinating interplay between these competing goals, especially since almost everyone at the table has different paths to a win. 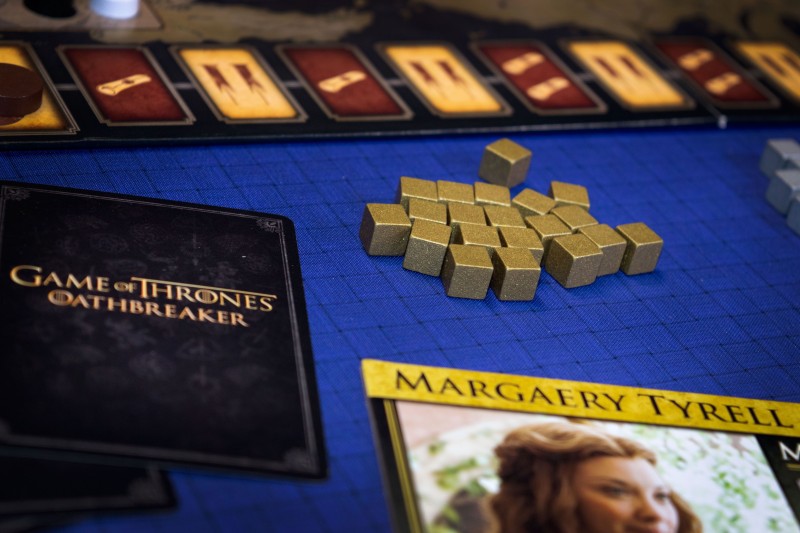 Oathbreaker includes some excellent optional rules to customize play. An 8-player variant includes both a king and queen, working together to maintain order, and a smart system for how that works – making it far more doable to manage the large number of players sitting at the table. Among other options, I also really like the “Order in the Court” option, which expressly forbids nobles from speaking unless it’s their own turn, thereby limiting the cross-talk or conspiring that often unfolds among experienced bluffing game players, and consequently speeding up play.

Licensed projects connected to movies and TV shows sometimes get a bad reputation, cashing in on popular properties with simplistic gameplay models or low-quality components. That’s not the case with Oathbreaker. This is a rich and nuanced social party game, and a great pick for play groups who have tired of more straightforward options in the genre. Two separate double-sided game boards (each for a different player count) offer a beautiful map of Westeros and a way to track missions and rounds as they pass. The card and component art is mostly photography from the show, but that imagery does a great job of recapturing the personalities that so many of us followed for the many years that Game of Thrones was unfolding. This is a satisfying and well-produced release that you’ll be happy to see laid out on the table.

If you feel like your gaming group is ready for a rewarding trip into the world of Ice and Fire, Oathbreaker does an excellent job of capturing the vibe of deceit and underhanded dealings. It’s also one of the most innovative twists on the bluffing game concept to release in recent years, and well worth a look for the many fans of that playstyle.

If you just can’t stomach lying to your best buds over a Saturday evening’s entertainment, worry not. There are plenty more great tabletop recommendations waiting for you over at our Top of the Table hub. Click on the banner below to explore those options, or drop me an email if you’d like some personalized recommendations; I’m always eager to help you find the right game for your friends or family game night.