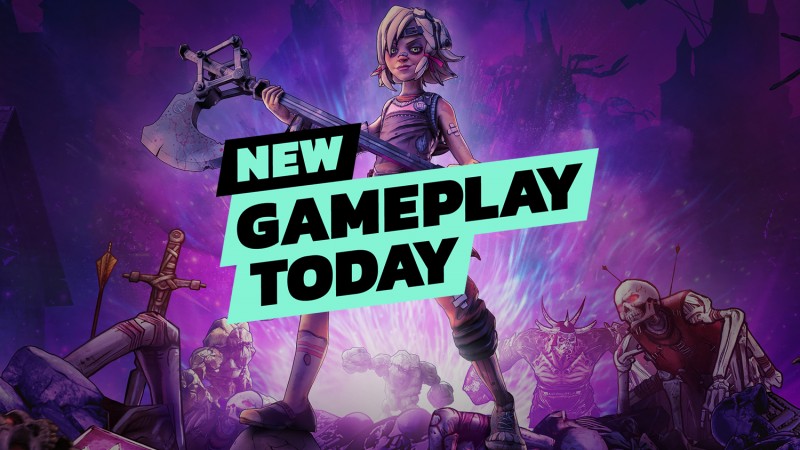 The Borderlands series has made a name for itself with excellent gunplay, zany stories, and more, popularizing the looter-shooter genre over the last decade-plus. But with three mainline games and a plethora of spinoffs, many have wondered where the Gearbox Software posterchild would go next. The answer is Tiny Tina’s Wonderlands, and we’re showing off some brand new gameplay in today’s video!

Join your hosts Alex Stadnik and Wes LeBlanc as they wallop their way through this truly bananas new game world. Instead of taking place in the sci-fi world of Pandora, our titular hero, voiced by Ashly Burch, is leading her star-studded party (including Andy Samberg and Wanda Sykes) through a game reminiscent of Dungeons and Dragons, but with all the loot and Borderlands humor you’ve come to expect from the series.

In this fresh episode of New Gameplay Today, the boys are showing off the new weapons and powers players will get their hands on when the game launches on March 25. Because it takes place in a high fantasy setting, the familiar weapons are replaced with something a bit more magical (though still feeling right at home for anyone who’s played the series).

We also show off the game’s replacement for grenades in spells. These magical attacks feel tremendous and offer great buffs and explosive powers that make each encounter with the enemy goblins feel exciting. Speaking of goblins, we also dive into an entirely optional portion of the game, where you help the character Jar on a quest to help liberate her fellow green monsters and attain their freedom.

Enjoyed this look at Tiny Tina’s Wonderlands? We’ll have more coverage of the game ahead of its release on PlayStation 5, Xbox Series X/S, PlayStation 4, Xbox One, and PC, including a chat on this week’s episode of The Game Informer Show. For more New Gameplay Todays, be sure to subscribe to our YouTube channel to stay up to date on some of the hottest games of the year and beyond, including looks at Elden Ring, Gran Turismo 7, and GhostWire: Tokyo in 4K!