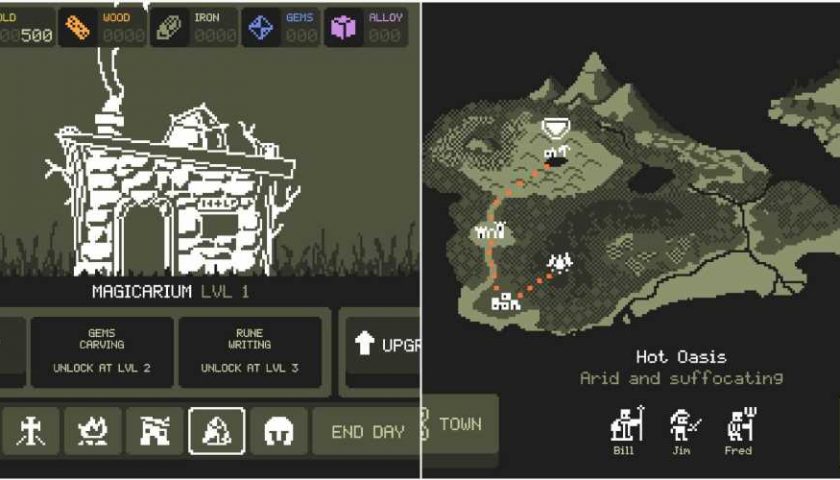 Difficult, turn-based RPGs with a focus on positioning and line management have slowly become all the rage since the meteoric success of Red Hook Studio's Darkest Dungeon. Fast-paced combat mixed with a dash of town management and satisfying progression just so happened to tickle everyone's fancy. Tinyfolks takes that basic concept and asks and answers a simple question: “what if this came out on Gameboy?”

Surely such a ludicrous idea would hold no weight in the grand scheme, yet here we are. Tinyfolks is very much inspired by games that came before but comes with a gorgeous retro art style and score that hits you right in the nostalgia. Not only that, but the game is a blast to play and makes just enough changes to stand out from the crowd mechanically. It ain’t easy though.

How To Attack Effectively 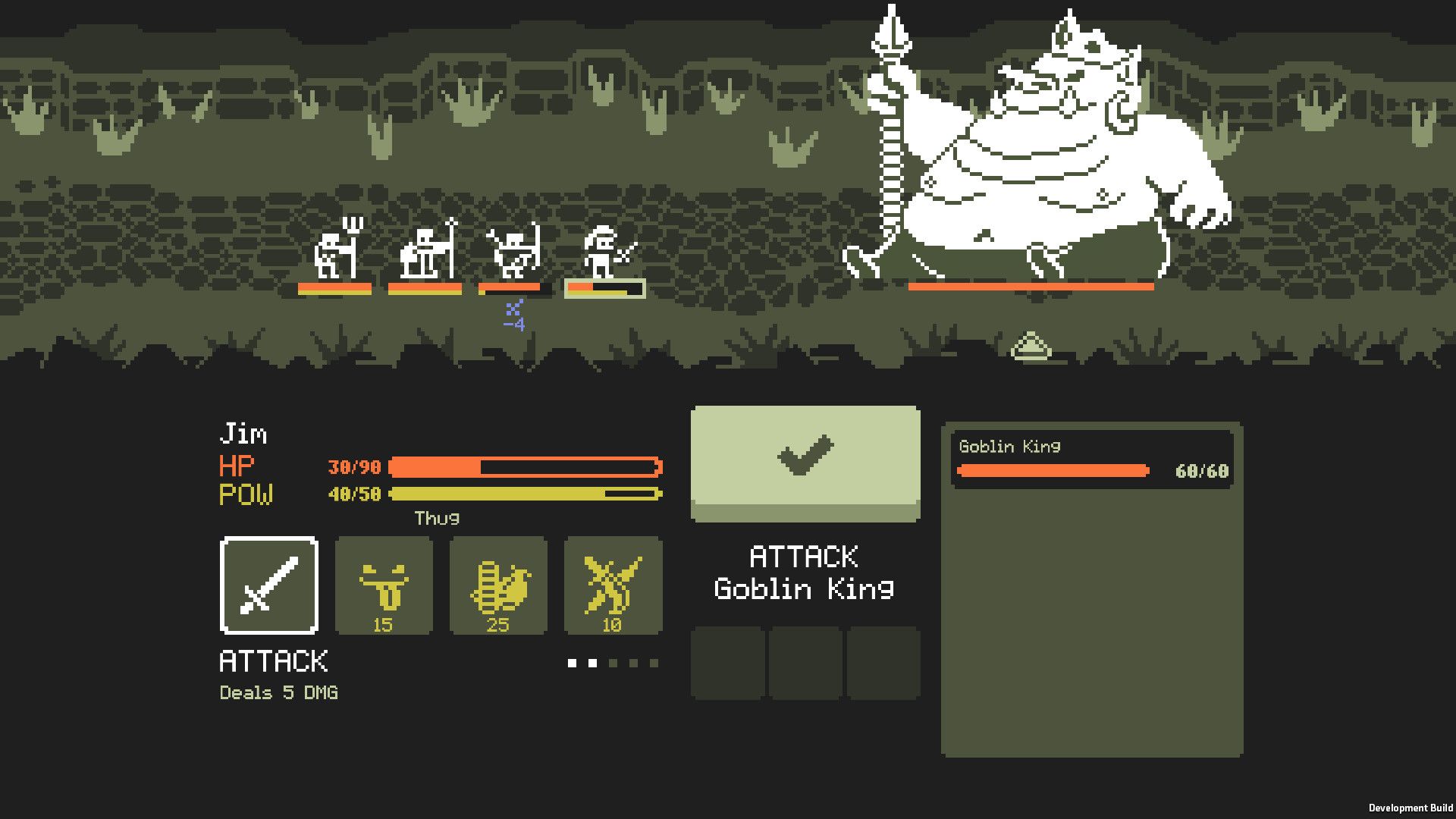 Combat is where you are going to spend a lot of time in Tinyfolk. The “dungeons” you explore may be small, but they are 100 percent action, 100 percent of the time. Combat is turn-based, with each side getting to attack with one of their marching order-specific characters/units. The positioning of your character has no bearing on who they can attack, however, the attack they use does impact who they can target.

For example, a basic attack from most classes can only hit the front row of the enemy formation, whereas a special attack could hit anyone on any row, everyone in a formation, or simply a few guys in a specific place. It sounds more complicated than it actually is, and the game does a great job in highlighting what attacks attack where thanks to a small chart at the bottom of the screen.

Be Wary Of The Timer 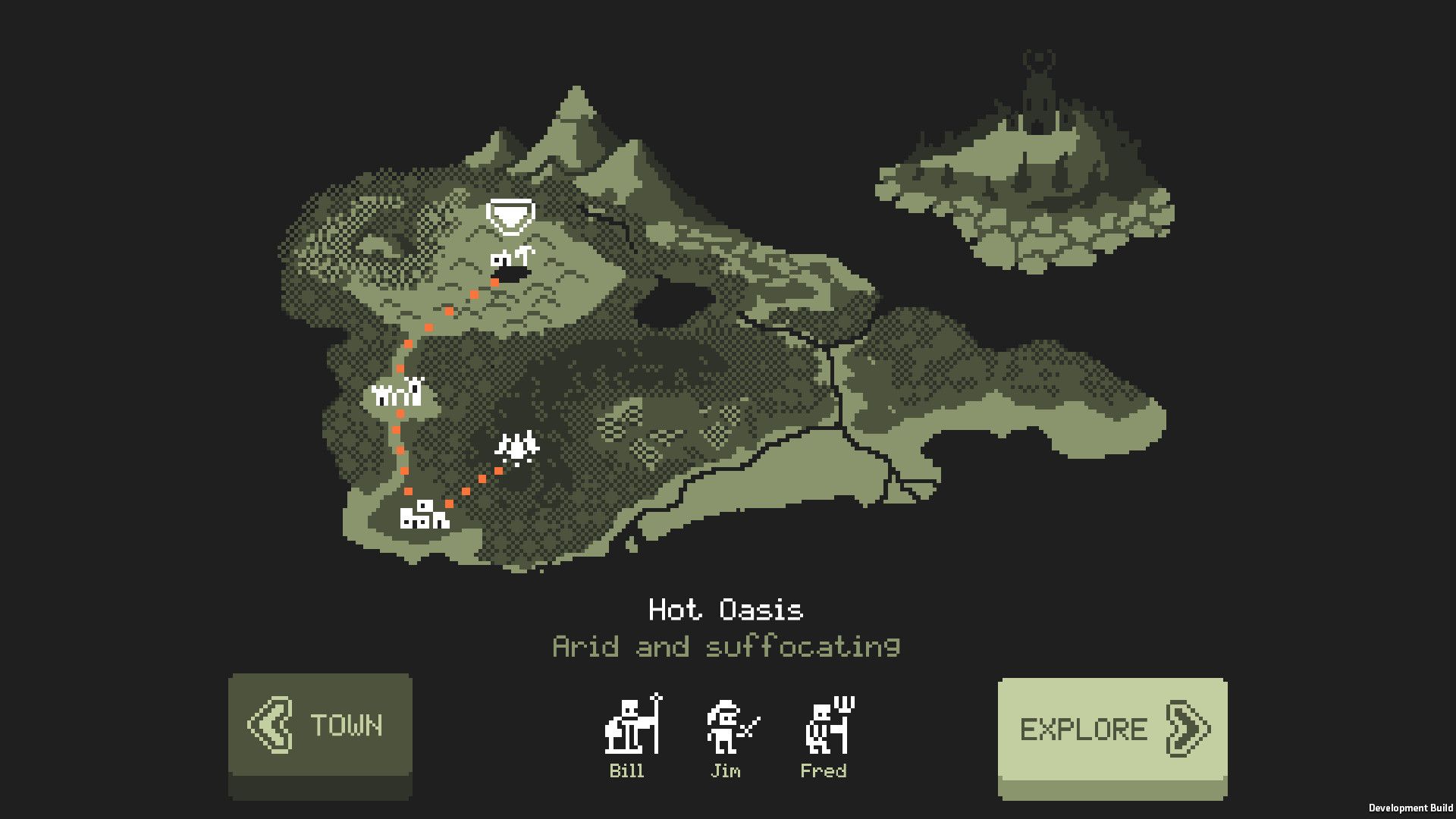 Tinyfolk is much shorter than your standard game in this genre. Instead of lasting tens of hours, a run of Tinyfolk could only last you a couple. This is in part thanks to the streamlined design, however, the biggest contributor is the time limit. A standard run of Tinyfolk must be completed in under 45 days.

This time limit is a constant reminder not to dilly-dally around, but it does still offer plenty of wiggle room for the occasional mistake. If you want to make it more difficult, you can crank the challenge to Hard, and this will in turn decrease the number of days you have to win to a nerve-wracking 30. Alternatively, you can remove the timer entirely by dialling it back to Easy. 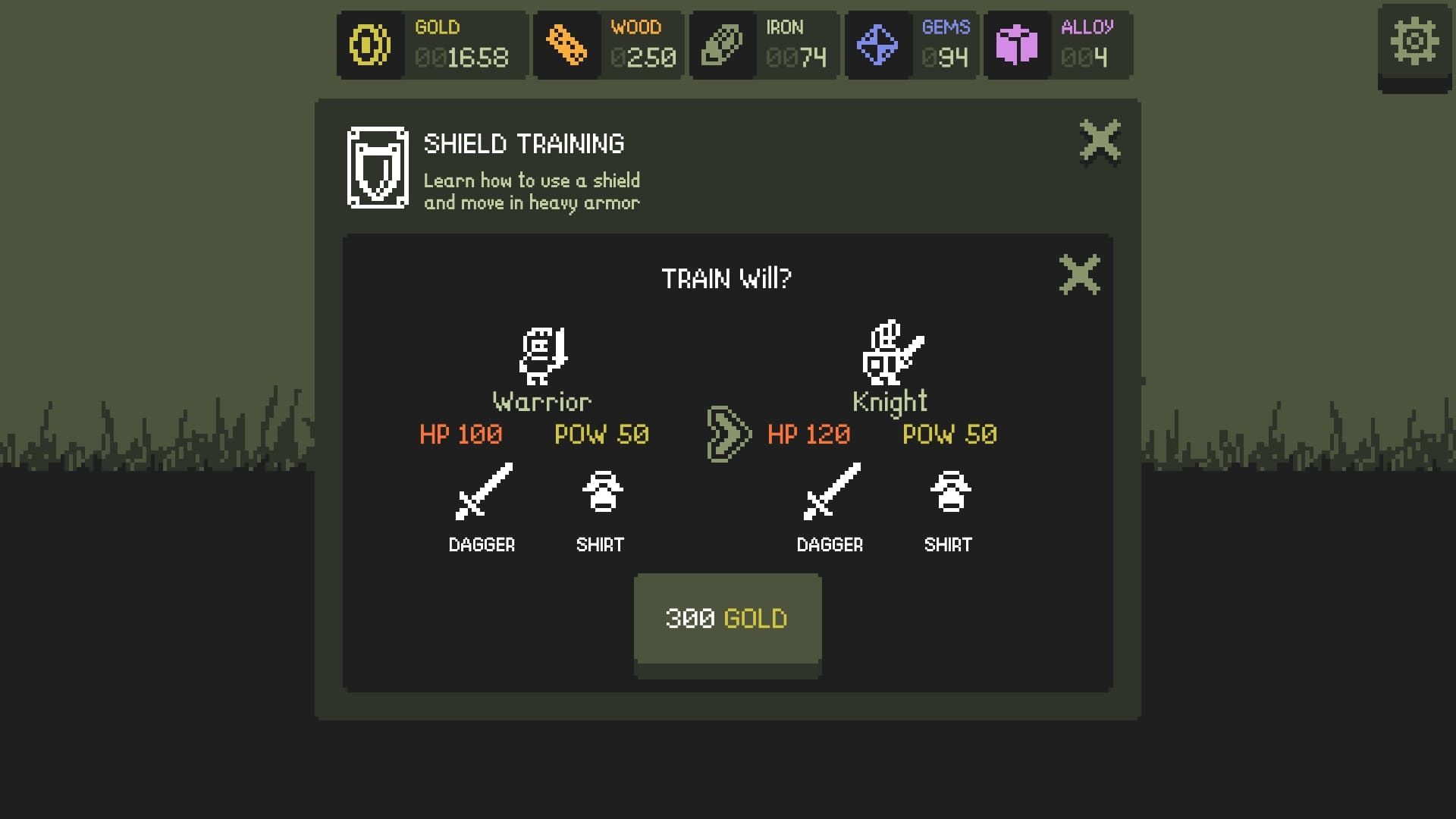 Tinyfolk has a lot of classes to play around with, but unlocking them is not as straightforward as checking the Inn. In Tinyfolk, combining different classes with different constructible buildings will result in a character gaining a new class. At first, you only have access to Folk and Warriors, but as you progress, this number expands quite significantly.

Experimentation is key here, and messing around with different combinations can lead to some stellar results. For example, combining your humble Warrior with the Blacksmith will train a Berserker. Take a Folk and plonk him into the Temple and you get a Priest. Use this Priest in the Blacksmith to make a Monk. These are just small examples of what you can do with a bit of messing around.

Don’t Be Afraid To Sleep 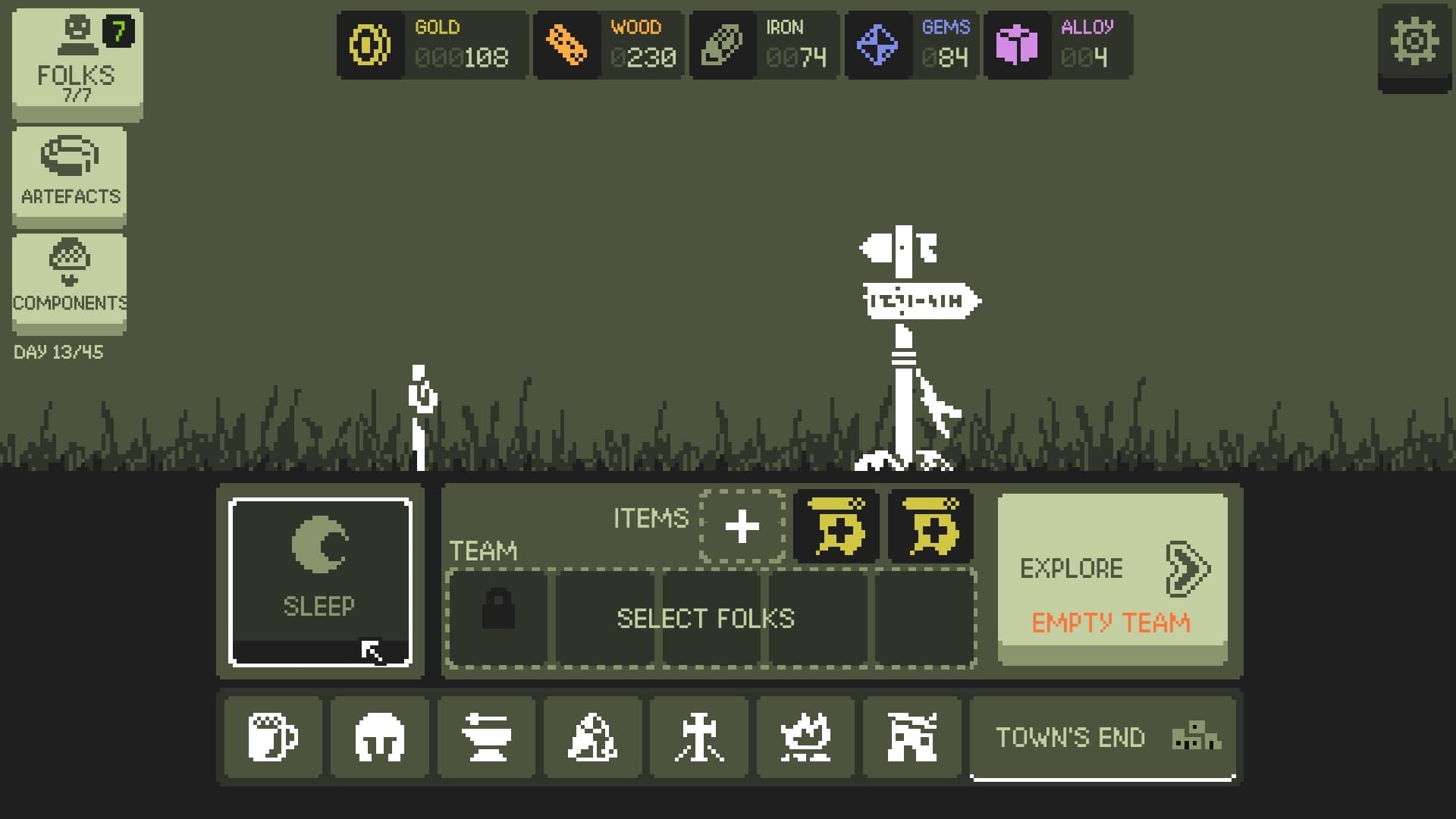 The goal of the game is to, well, win. To do this, you need to progress through the game and win before time runs out. This doesn’t mean you have to push your roster to the limit at all times. Sometimes it’s better to just not do anything at all that day. We know, this sounds like blasphemy in a game with a timer.

Sometimes you need to wait for a character to be trained, or for a building to be constructed. Rushing out and tackling the game ineffectively is much more damaging than taking your time, and preparing a bit longer before a difficult challenge.

How To Increase Your Population 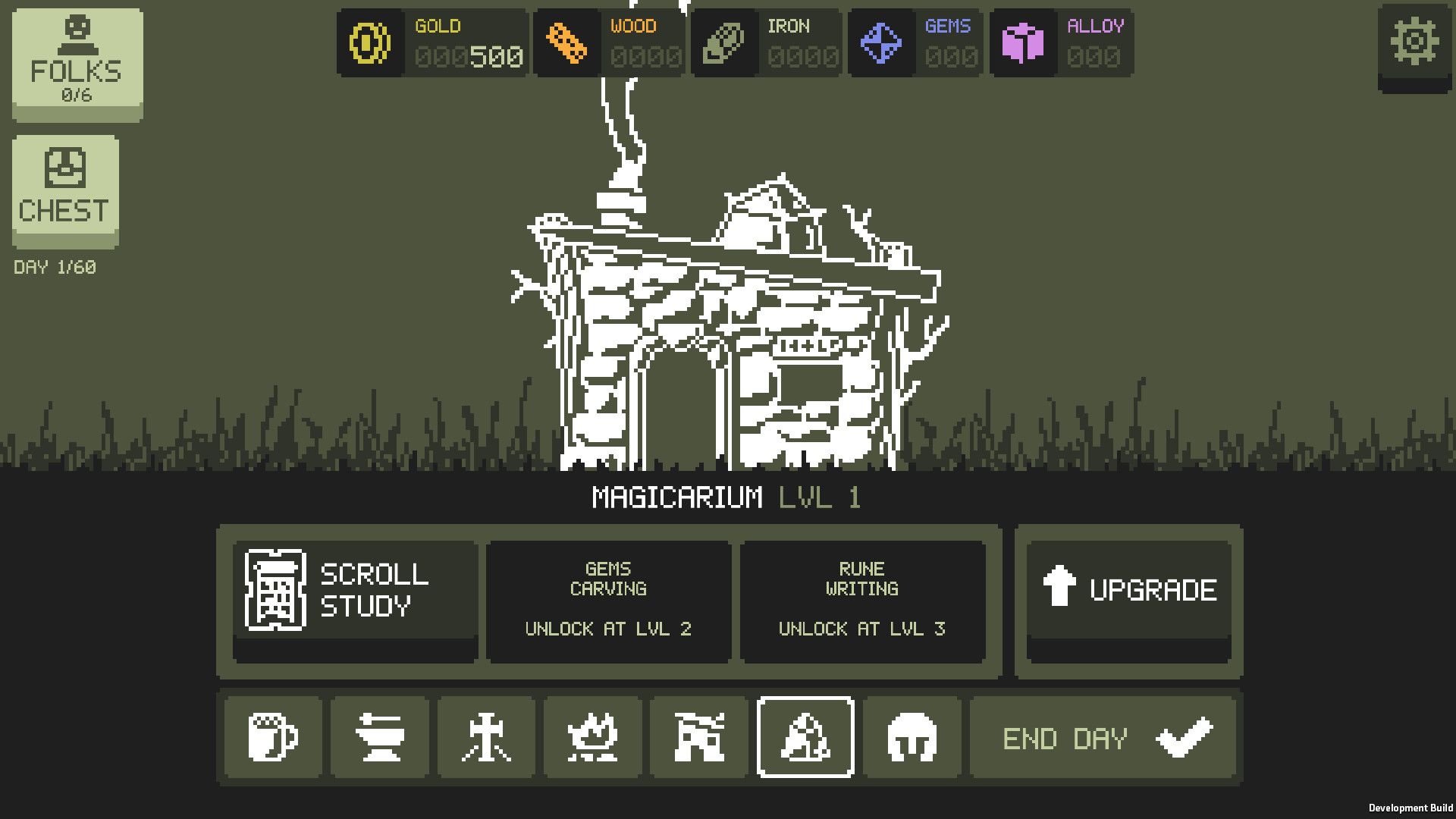 A lot of Tinyfolks mechanics are locked behind population size. The number of Folks you can recruit or the number of characters you can take with you on missions is all determined by your population. Thankfully, population is pretty easy to increase.

All you need to do is build more buildings. You start with a simple Inn and Blacksmith, but constructing just about anything else will push that cap a bit further. Sometimes upgrading buildings will have the same effect, so keep an eye out. 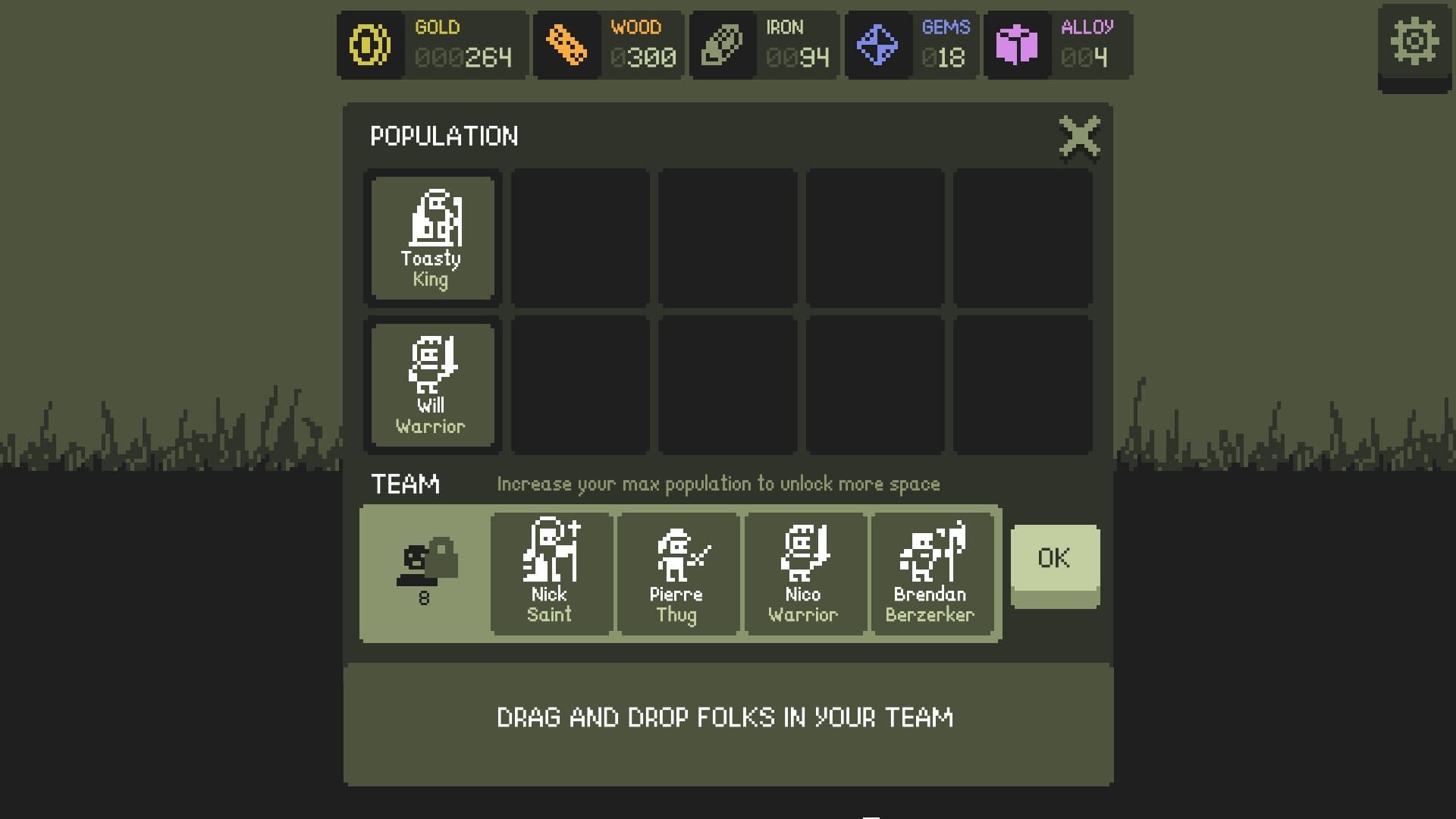 After characters come back from a mission, they will be battered. This essentially translates to an extended period of downtime before you can bring them out again. In the early game, this means you are going to have to wait so your team is at full strength, whilst in the mid and late game, this just means you have to take different party members with you.

You can speed up recovery in a number of ways. Firstly, you can just not take damage during a mission. This is easier said than done, but in general, the less damage you take, the less time you need to recover. Another option is to upgrade your Inn and have a Comfy Night. This lets you recover significantly faster than normal, therefore allowing you to use your characters more often. 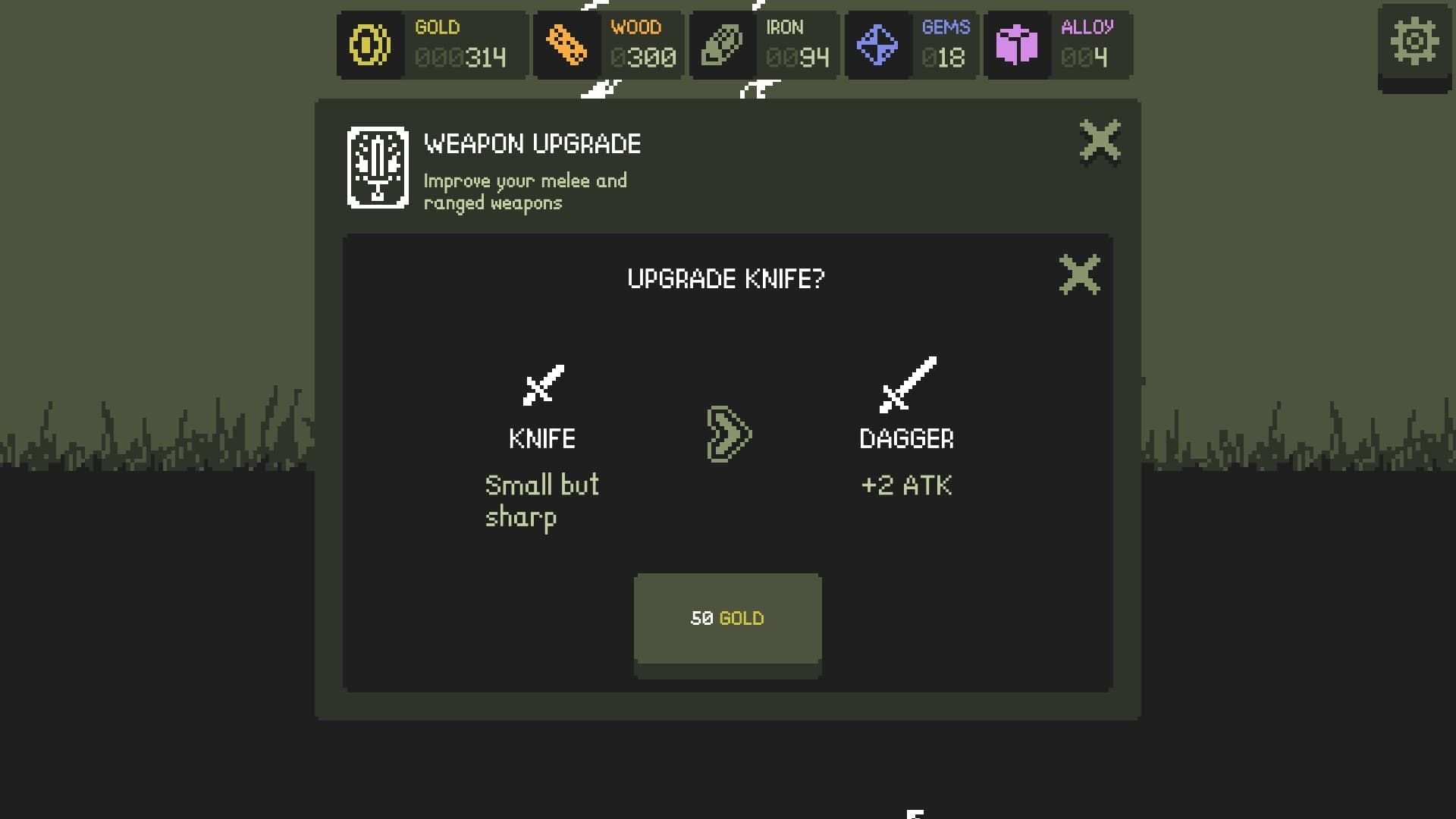 There are plenty of upgrades in Tinyfolk, and they are all worth considering. Not only can buildings be upgraded to unlock new and improved abilities, but so can your characters. Using the Blacksmith, you can enhance the damage of your units. Spending money at the Temple can increase your entire unit's stats, etc.

It’s all well and good creating new classes and messing around, but enemies will start to get stronger, and your classes, without help, will start to fall behind. These upgrades are necessary for victory, so don’t be tempted to neglect them.

Check Out The Shop 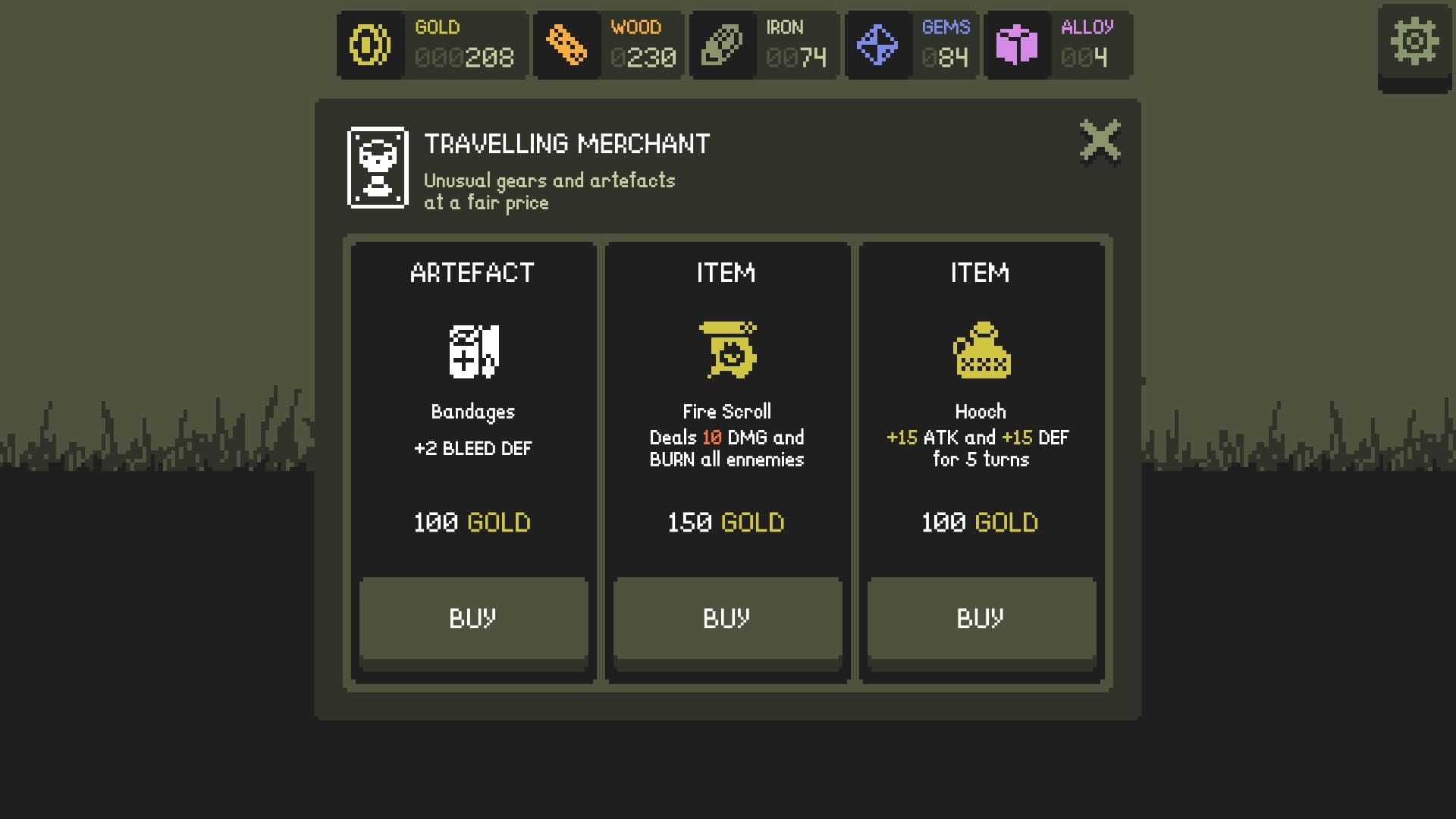 You will eventually unlock the shop whilst you play, and the shop is very useful. You can visit the shop before you head off on an adventure, and from here, you can buy useful consumables and artefacts.

These are nearly always well priced, so won’t break the bank, and provide incredibly powerful benefits. You can grab scrolls that heal your entire party, potions that increase the effectiveness of your units, or maybe even just a Tomahawk to yeet at an enemy for massive damage. These can turn the tide of a difficult battle instantly. Always check the shop for killer deals.

How To Increase Combat Speed 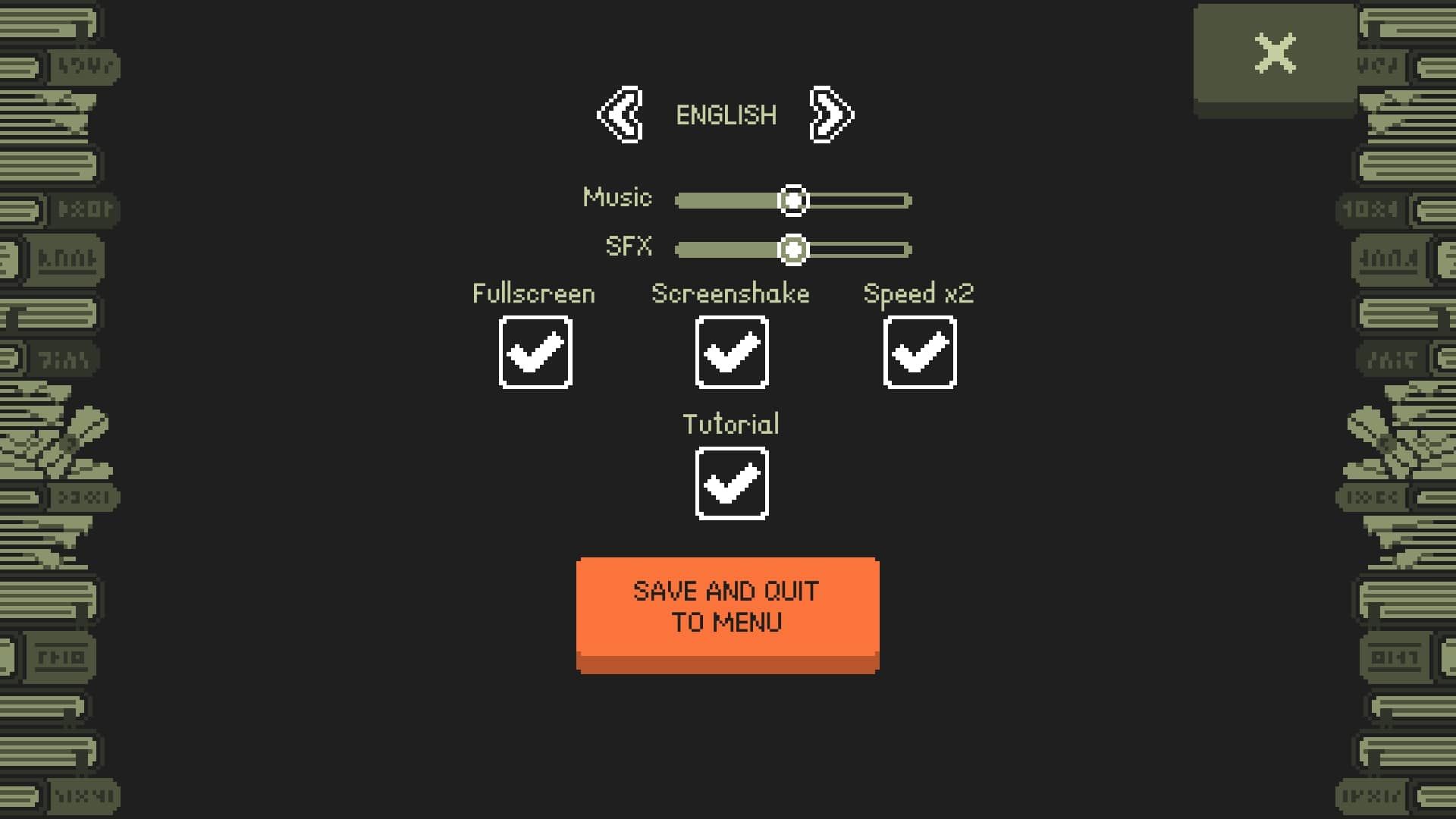 The fights in Tinyfolk are pretty quick, but since there are a lot of characters on screen, and they all have to do animations, it can get bogged down slightly. If you want to bypass all of that, then you can increase the speed by 100 percent.

To do this, all you have to do is click the cog icon at the top of the screen (right) and tick the “Speed x2” box. Once that’s done, you are ready to go. Combat animations will fly by at super-speed, and you can burn through combats much quicker as a result.