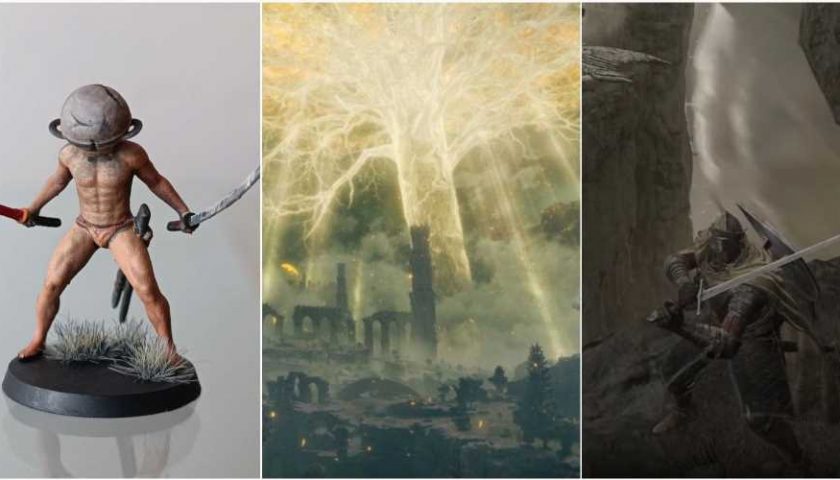 This week's Elden Ring roundup is dedicated to the heroes and scholars who stood tall amidst the horrors and nightmares of The Lands Between. These true demigods have shown their virtue via in-game acts, be they beating it in the least possible time, helping others in heroic manner, or learning forbidden knowledge via the arcane art of datamining. Let us honour them and their deeds.

You've surely heard the legend of Distortion2, the hero who trudged through The Lands Between and its many horrors in under seven minutes. The nimble speedrunner made multiple journeys across the land, each shorter than the last. It seems now that their deeds have inspired another.

Distortion2's speedrunning record was broken within four days by seeker TV. The light-footed Tarnished walked the same path as their predecessor – using the zip glitch – and attained a time of 6:46, a whole 15 seconds faster. We will be watching seeker TV's progress with bated breath, as they attempt to still shorten this time.

Let Me Solo Her Becomes A Community Legend

Heroes always appear when all hope seems lost and you're ready to give up. Redditor sazed813 was in such a position when Malenia's blade proved to be too much for them. But at the jaws of defeat, sazed813 spotted a glint of hope – a summoning sign for a Tarnished called 'let me solo her', who donned naught but a jar on their head and two katanas.

True to their name, this benevolent hero bid sazed813 to remain in safety and faced Malenia by themselves. The Blade of Miquella couldn't even touch the Tarnished, as they moved as if they were one with the Grace. Ultimately, Malenia stood no chance, and fell without even touching 'let me solo her'. These brave deeds were spread far and wide over the internet, resulting in praise, respect, and even effigies of the brave protector.

A New Hero Is Soloing Mohg

Heroism in turn brings out heroism. And that is precisely what the legend of 'let me solo her' has brought forth. Tarnished struggling with Mohg may look for the summoning sign of Let Me Solo Him – aptly named in honour of their predecessor. This Tarnished does not have the same combat prowess Malenia's slayer is known for, but chooses to use magic instead.

Let Me Solo Him appears to be using the Comet Azure sorcery and Cerulean Hidden Tear in their Flask of Wondrous Physik to allow them to cast the spell continuously and one-shot Mohg. It seems the age of heroes is truly upon us.

While heroism and bravery have their place in The Lands Between, they are not the only virtues to be strived for. These scholars have unearthed secrets that even the most learned of the Raya Lucaria Academy know nothing of.

Zullie the Witch has expanded upon their knowledge of The Lands Between and uncovered that the mighty Erdtree stands 5,048 meters or 16,562 feet tall, higher than even the Alps. Meanwhile, king_bore_haha has unearthed proof that Caelid is harder than any other area in the land, with a level scaling between 10 and 13. Illusory Wall's study into the demigods of The Lands Between has revealed exactly how much of a buff bosses receive when you use player summons. And finally, Lance McDonald has discovered a sidequest featuring a strong alcoholic beverage, but was eventually removed from the game.