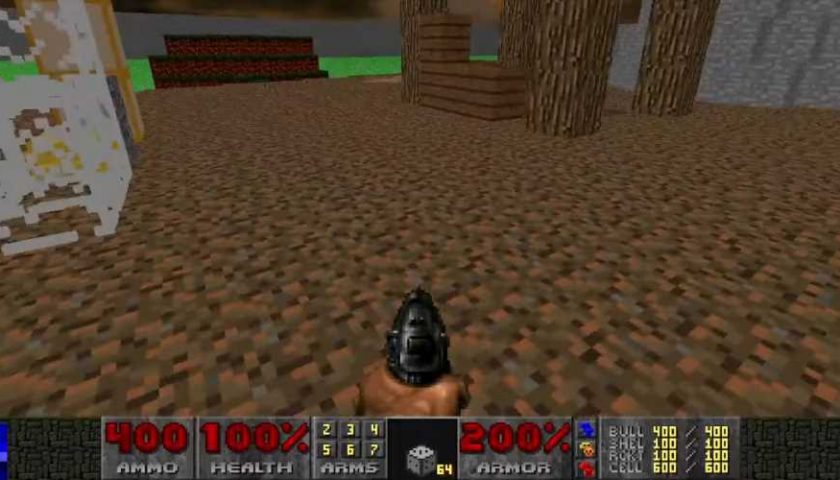 You know what the classic '90s shooter was missing all along? Minecraft blocks. You're in a Doom deathmatch with your friends, running for cover, firing off rounds, and you can't just plop down a dirt block – ludicrous. But now you can with Voxel Violence.

Think of it like Fortnite building but with Minecraft blocks in the original Doom 2. You have your weapons, the usual HUD, and an open grass field. But there's an added part of the UX – your block counter. You can place them down and build your own cover or, if you want to put the guns aside and be pacifists, you can get to work on making something creative.

It's not just a visual overhaul for Doom that makes it look more like Minecraft, it adds Minecraft's functionality to the game, even though it's over a decade older. You can see in the trailer below that modder QwertyKing builds staircases and forts to hide out in, getting the high ground on their enemies. You see a hollow yellow frame indicating where it's going to be placed, letting you plop down whatever you want.

It's entirely free, too. All you need is Doom 2, a mod loader, and the download file. With those three ingredients, you can jump right in and make yourself a little dirt shack in a whole new game.

The mod description says that the save file will have all the blocks you need and that you can build up your very own Doom maps by using these blocks, essentially creating a new way of making maps in this old '90s classic. And QwertyKing encourages players to get creative and share their maps with the community, using their mod as a platform to bring something entirely new to Doom 2.

We've seen plenty of mods for Minecraft that add Doom-like functionality whether it's guns, arenas, enemies, remade maps, and more, but this is one rare occasion where someone has done the opposite.