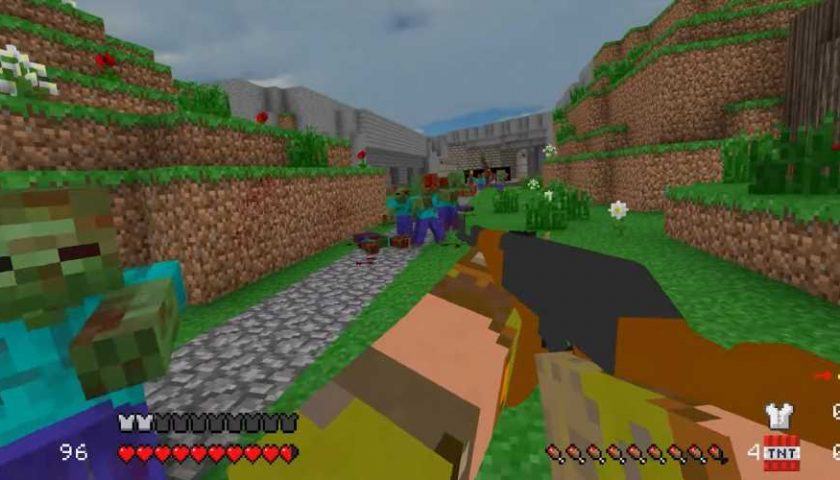 Minecraft and Doom have a long history of modding crossovers. People have added functioning block-building to Doom, and put Doom into Minecraft, complete with weapons, replica levels, and even its enemies. But now someone has gone the extra mile and completely converted Minecraft into a fully-functioning FPS in Doom's engine, letting you rip 'n tear through four-legged Lovecraftian Creepers with pixelated shotguns as zombies and spiders scurry after you.

It's the most polished looking crossover mod to date, with new animations given to Minecraft mobs that make them move fluidly despite their pixelated blocky legs (thanks, PCGamesN). And every environment, including interactables such as levers and buttons, are swapped out for Minecraft textures, complete with sounds and new models for weapons to make them fit the aesthetic better. Then there's the keycards and doors which have all been given a Minecraft facelift, while enemies have unique death animations and new states of deteriation – the more you shoot at a zombie, the bloodier it gets.

It's billed as "BRUTAL MINECRAFT", making it clear from the get-go that this is a Doom mod that aims to make Minecraft play like Doom, not vice-versa. Given how Minecraft is dabbling in different genres for its spin-offs, with Diabo-like dungeon crawling in the fittingly named Dungeons and RTS in the upcoming Legends, an FPS isn't all that far-fetched. Though, one this gory is.

It comes with over 25 weapons, and not all of those are guns. You can use rocket launchers, snipers, and flamethrowers, none of which feature in Minecraft (though they, oddly enough, fit right in), but also Minecraft's signature swords. There are also a handful of Minecraft-themed bosses, but the main enemy is zombies, so you won't be fighting the denizens of Hell (or I suppose the Nether), but undead hordes ravaging Minecraft's nondescript kingdom.

The name and even the look and feel of it could easily fool you into thinking this is a Doom Eternal mod, but it runs entirely on Doom 2's engine. Despite that, it's fully 3D and expands on enemies to let them dodge your shots and use special attacks. Some of those enemies even come with guns, like the machine gun-wielding zombies, so you won't just have ghasts and skeletons to contend with when it comes to ranged combat.

As for the levels, you'll be fighting through Cave, Crypt, City, Mansion, Infernal dungeon, Bridge of Souls, Main Portal, and Infected City. The Nether is as gloomy as it is in Minecraft, but it's chock-full of potions which is handy.