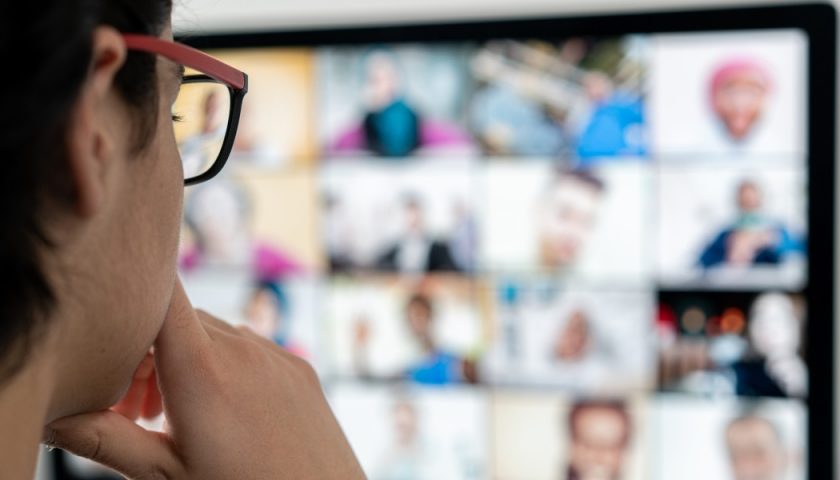 Theta Lake, which offers a security and compliance solution for popular collaboration applications, has closed a $50 million series B funding round as the company seeks to help more customers uncover risks across their digital communications.

The solution is deeply integrated with major collaboration platforms such as Zoom, Microsoft Teams, Slack and Cisco Webex, and offers a number of first-to-market capabilities, including around detection of risks in video and voice communications, CEO Devin Redmond told VentureBeat.

Theta Lake’s product offers both archiving of content from the use of collaboration apps, as well as security and data protection features for communications on those platforms. Security features include detection of sensitive information that has been shared onscreen in a video meeting, or verbally during an online meeting.

“What we do that is very different is that we’re designed to ingest or consume any type of content and analyze it,” Redmond said, noting that the company holds the first patent for detection of risk inside of visual content.

“Nobody’s seen anything like it before,” he said. “But once they see it, they understand how it solves real problems that they know they have in their environment.”

Now, as the company foresees a sizable growth opportunity ahead, Theta Lake has raised its series B funding to accelerate its commercial expansion — and the round includes investments from many of the collaboration app makers themselves.

Battery Ventures led the round, while collaboration platform vendors that participated were Cisco Investments, RingCentral Ventures, Zoom and Salesforce Ventures (Slack is owned by Salesforce). Other backers in the round were Neotribe Ventures, Lightspeed Venture Partners and the Wells Fargo Startup Accelerator. The company has now raised $71 million in funding since its launch in 2017.

Ultimately, Theta Lake wants to establish itself as the go-to player for providing security and compliance for modern digital collaboration, according to Redmond. “We look at this as the next evolution of what needs to happen for the communication compliance and security stack,” he said.

Theta Lake has been seeking to be a pioneer in the area: Along with being able to ingest any type of digital content, the company’s solution aims to stand out by using machine learning (ML), deep learning and natural language processing (NLP) to analyze the content and detect risks.

For instance, if personally identifiable information (PII) such as a Social Security number is shared on a screen during a video meeting, Theta Lake’s solution will catch that, Redmond said. “We are the first, and still only, vendor doing something on that front,” he said.

But other security and compliance tools have struggled with even more basic issues, such as capturing emojis and “likes” in a text-based chat conversation, or arranging chats over a period of time into a logical order, Redmond said. Theta Lake can do all of that, which makes it far easier for compliance teams to understand the full context of communications and easily find information later on, he said.

“We help reviewers navigate what they would normally have to do very manually, using keyword search, in a legacy tool,” Redmond said. “They’re able to move from being reactive to being proactive in what they do.”

For example, if there is an abusive conversation, or confidential data is shared, or a chat poses a regulatory risk, Theta Lake is “able to flag that very quickly for the people who need to know,” he said — as opposed to archiving it and then requiring a person to search for the item later.

Importantly, as business communications have moved to collaboration platforms, expectations from regulators have changed, as well, Redmond said. For the last three years in a row, fines for not being proactive around such issues have more than doubled year-over-year, each year, he said.

“There is an expectation of being more proactive in knowing what you’re capturing, and taking action on it effectively,” Redmond said.

Many companies may still need to get caught up in this regard, given all of the changes of the past two years, he acknowledged. Many companies are “now just starting to reconcile it,” Redmond said, “which has driven some pretty substantial growth for us.”

Apart from the detection capabilities, Theta Lake is also differentiated with its ability to serve as a centralized platform for managing security and compliance risk across collaboration and unified communications (UC) platforms, he said. In addition to Zoom, Microsoft Teams, Slack and Cisco Webex, Theta Lake also integrates with RingCentral, Avaya Cloud Office, Symphony and many others.

The solution has more than 40 integrations in all with collaboration and UC platforms.

“That’s one of the big benefits for these organizations — they have this heterogenous environment, and this gives them a unified way to look across that and identify risk,” Redmond said.

Looking ahead, Theta Lake plans to develop new ways to derive insights about how users are interacting and sharing data, using input from multiple collaboration platforms, he said. That will mean that customers can uncover risks that sit “not just within one interaction on Zoom, but across many interactions over Zoom, Teams, Slack, Webex etc.,” Redmond said.

Theta Lake reports that it now has more than 50 customers. About 75% are in financial services, though other strong verticals for the company include government, healthcare, tech and manufacturing.

While highly regulated financial firms have an obvious need for keeping tabs on risk and compliance for digital communications, “everybody’s having the same types of pain,” Redmond said. “What data is being shared over these channels? How are people behaving with each other? How are they behaving with external parties, like our clients, in that environment?”

Dharmesh Thakker, a general partner at Battery Ventures who is now joining Theta Lake’s board, said that the fact that hybrid and remote work is here to stay that means that businesses can expect “more security and compliance risks from all the collaborative tech tools we’re using.”

“It’s not an email world anymore, and Theta Lake is helping to address that reality for customers,” Thakker said in an email.

With its growth momentum and new funding, Theta Lake aims to triple its customer count and revenue over the next 12 to 18 months, Redmond said.

Santa Barbara, Calif.-based Theta Lake has 64 employees, and expects to finish the year with more than 100 on staff.

From its beginnings, Theta Lake — cofounded by Redmond and CTO Rich Sutton — knew that the company would likely take some time to establish itself, given the newness of this solution area.

For starters, Theta Lake set out to “build really deep, trusting relationships” with the major collaboration platforms, Redmond said. Only by doing that, he said, could the solution hope to achieve a high level of quality of service.

“If you were trying to decrypt a Zoom conversation and get inside of that [to do analytics], that would negatively impact that user experience, and people would want to use different tools,” Redmond said.

Theta Lake has thus worked to build its capabilities into the fabric of the major collaboration platforms, by leveraging their APIs, and even working with the platforms on their APIs to evolve them, he said — all so that “we could be the compliance and security infrastructure for them.”

The collaboration platforms, meanwhile, have welcomed the partnership because they have found that many businesses have disabled some functionality by default for their employees, out of concerns about security, risk and compliance issues, Redmond said. For businesses that use Theta Lake, much of that functionality can be turned back on, he said.

In many ways, the company is much further ahead than it expected to be at this point, pre-pandemic.

“We built this company and this technology with a vision that this would come to the forefront — these [communications] channels would become prevalent and dominant in many ways — by 2025,” Redmond said. “We didn’t anticipate the pandemic jumping into the middle of it, and driving the adoption wave very, very quickly.”

Businesses are now waking up to the fact that in this digital workplace, “there are all these same risks that we used to have in all these other channels,” he said. “And so they’re asking, ‘What are we doing about them?’ And that’s the question that I think most folks haven’t answered.”