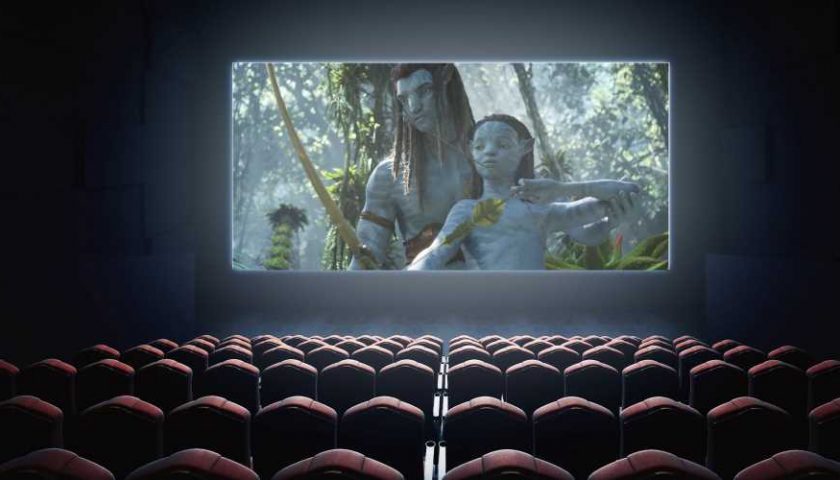 When the pandemic started in 2019 I went home, put on my pajamas, downloaded Uber Eats, sat down in my gaming chair, and stayed there until this Monday when I went to see Avatar: The Way of Water. Things have changed since I went into a semi-permanent goblin mode. Gas costs twice as much, the McRib is canceled, and there’s too many types of goddamn movie screens.

This phenomenon didn’t start during the pandemic, but I’m going to go out on a limb and guess there’s a lot of people out there who are paying attention to movie theaters for the first time in a long time thanks to Avatar. I’ve seen it and I can tell you first-hand that there’s no bad way to watch Avatar, but when Jim Cameron says “go see it on the biggest screen you can find,” he’s not just blowing smoke. The Way of Water is the cinematic event of the year, maybe the decade, and certainly since the start of the pandemic. There hasn’t been a gigantic, ridiculously expensive movie like this since Avengers: Endgame, and a lot of people, myself included, want to celebrate the occasion by seeing it on the best screen possible.

Back in the day (I think it was a Tuesday) that meant one thing: IMAX. Considered for decades to be the gold standard movie theater experience, IMAX has a lot of loyal fans, and I consider myself to be one of them. But IMAX has a lot of competition these days, so I’ve made the painstaking effort of researching and testing all of them to give you a better sense of your options. Though this is an all-purpose list of cinema formats, it's prioritized by two Avatar-specific qualities: High Frame Rate and 3D. You can see Avatar in any format, but not every screen will show you Avatar as it was meant to be seen.

This is a plain-old movie screen. Sizes vary, as do seating arrangements and amenities. Standard or Digital screens may offer RealD 3D (the worst kind of 3D) or non-3D. This should be your option of last resort.

I'll keep this brief since this format just started rolling out exclusively in California this year. This is a non-premium upgrade to standard screens with a brighter, clearer display. Laser will eventually replace digital as the standard.

A lot of people seem to want their movies to feel like Universal Studios rides. Both 4DX and MX4D add things like fog, smells, and water effects, while D-Box is just a moving seat. I personally think these are a terrible way to watch an entire movie, but to each their own.

RPX is Regal's premium large format. Screens are 40×60… and that's about it. They use digital projectors, sometimes have Dolby Atmos audio, but not always, and 3D is presented in RealD 3D. The recliners are a nice upgrade from standard Regal seats, but overall RPX is just the slightest upgrade over standard digital.

These are holdovers from when AMC bought Carmike theaters and there's only 30 of them left in the US. They've got big plushy seats (but not recliners), floor-to-ceiling screens that are larger than standard, and upgraded sound. If you’ve got one of these, you’ve probably got one of the better AMC options too.

Prime was AMC's original premium format, which has largely been phased out and replaced by Dolby screens over the past few years. Prime screens are basically smaller versions of Dolby screens. They have the same recliners with built in subwoofers, most have Dolby Atmos audio, and many have dual digital projectors. The biggest downside is that they use the outdated RealD 3D.

If you live near a Cinemark, this is the premium format. Cinemark XD are the only THX-certified premium screens, which feature 11.1 channel surround sound. Some have recliners, some just have standard theater seats.

This 270 degree panoramic screen looks like three gaming monitors pushed together. This is a popular format around the world, with over 349 screens available. As a huge ultrawide fan I'm intrigued, but I probably wouldn't recommend it for a first viewing. Some films are shot in ScreenX format, Avatar: The Way of Water is not.

Here’s where we finally get to the real good stuff. It's important to remember that not all IMAX are created equal. Real IMAX screens have a 1.90:1 aspect ratio, which is extra tall compared to other screens, and come in at a whopping 59×79 feet. There are smaller versions (unaffectionally called LieMAX), and these days IMAX screens don’t all have the same features either.

For Avatar, you’re looking specifically for IMAX with Laser 3D. This will give you the most advanced laser projection with IMAX’s improved 3D. If you really want to make sure you’re getting the best experience possible, check if your local IMAX screen is single laser or dual laser. Avatar uses a high frame rate (48fps) for action scenes, but the dual laser IMAX can only display it at 2K. The single laser setup will give you the best possible viewing experience.

Many swear by IMAX, but if you want the highest quality and most consistent experience, you want Dolby Cinema 3D. Dolby screens all feature Dolby Vision and Dolby Atmos, widely considered the new standard for premium image and audio. For Avatar, you’ll get to see the film exactly as it was intended: 3D, 4K, HFR, and HDR (the latter of which IMAX can’t do). Dolby 3D is brighter and clearer than IMAX 3D as well, and considering Dolby is partnered with James Cameron’s production company Lightstorm Entertainment, it’s a safe bet that Dolby Cinema 3D is going to give you the most accurate experience to the director’s vision.

Dolby Cinema is only available at AMC, and not every Dolby screen is equipped for Dolby 3D. There are 250 Dolby Cinemas worldwide, compared to 1,500 IMAX screens, so if you live in proximity to one, consider yourself lucky. For Avatar: The Way of Water, this is the best cinematic experience you can get.