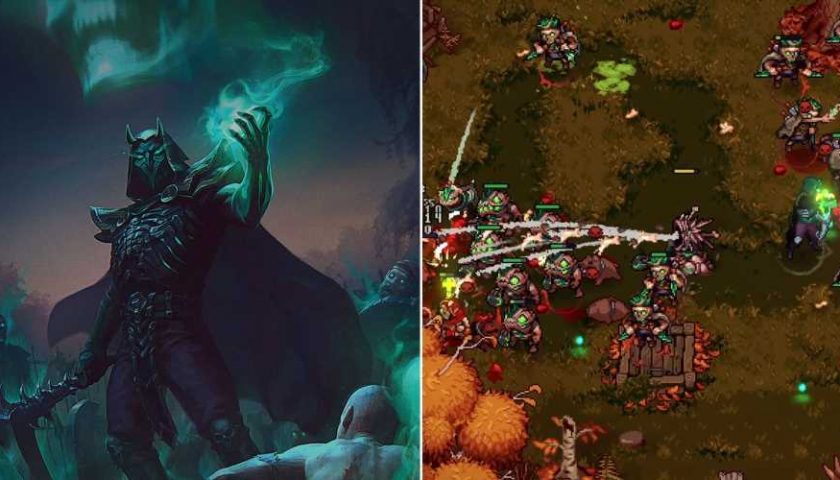 In the Roguelike world of The Unliving, you play as The Necromancer who can convert the enemy's corpse into an undead. The goal is to make an army out of the undead for the final battle of each area, and there are a few spells and sacrificial runes that help you in this endeavor.

You can follow optional paths during the raid to get an altar that contains an Essence, gold chest, or Lifespark potion. Bone Essence is one of the possible things to get here, and they'll give you three choices but you can only pick one. These rewards can include both spells and sacrificial runes. 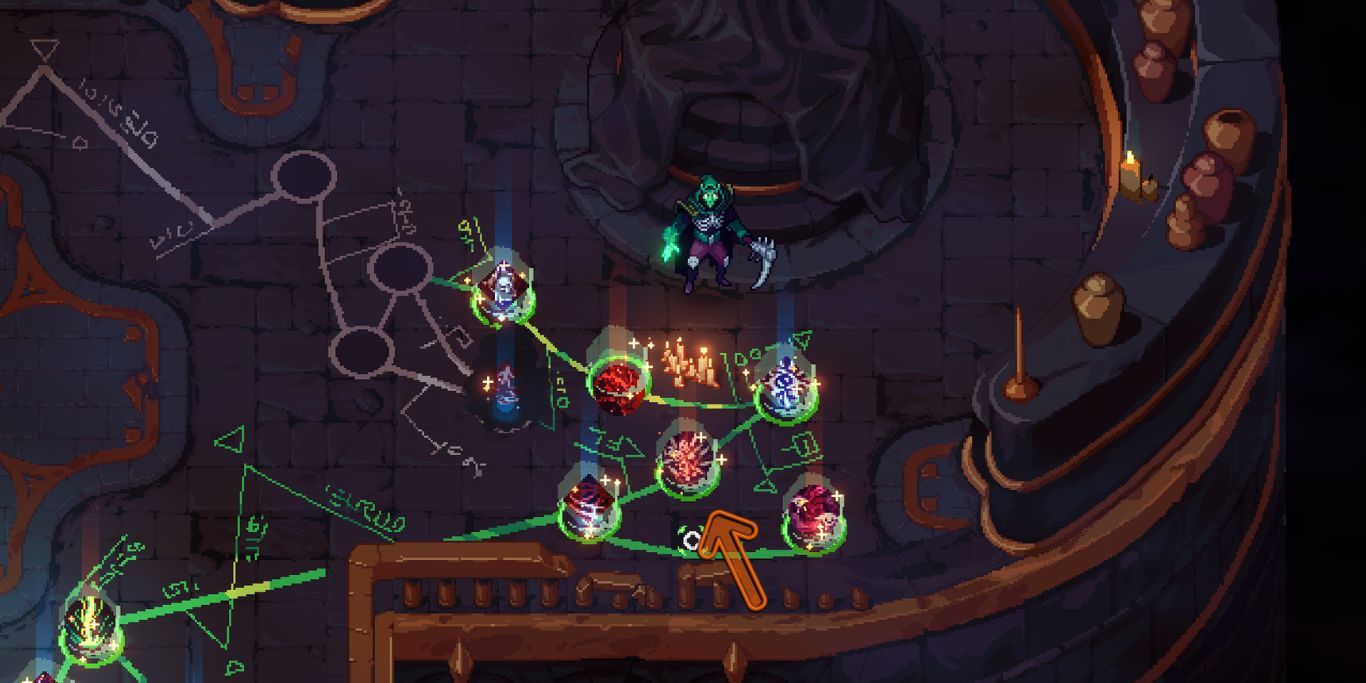 When you reach Edge of Immortality for the first time, you'll see multiple groups of white circles. All of these are spells and sacrificial runes that can be upgraded in a specific order. You have to get all the circles in a certain group to head to the next one through the white line.

These upgrades start just above The Lieutenant and slowly go all the way to the right side. You have to clear a total of seven groups before starting with the one that has Bone Wall in it, and there are ten upgrades in each. Bone Wall can be your second or third upgrade in this group.

Upon activating this ability, The Necromancer uses the bones lying around and creates a barricade around him, pushing away all the living enemies. While these barricades protect you from their attacks, they can also be used to create a small explosion by pressing the sacrifice button. 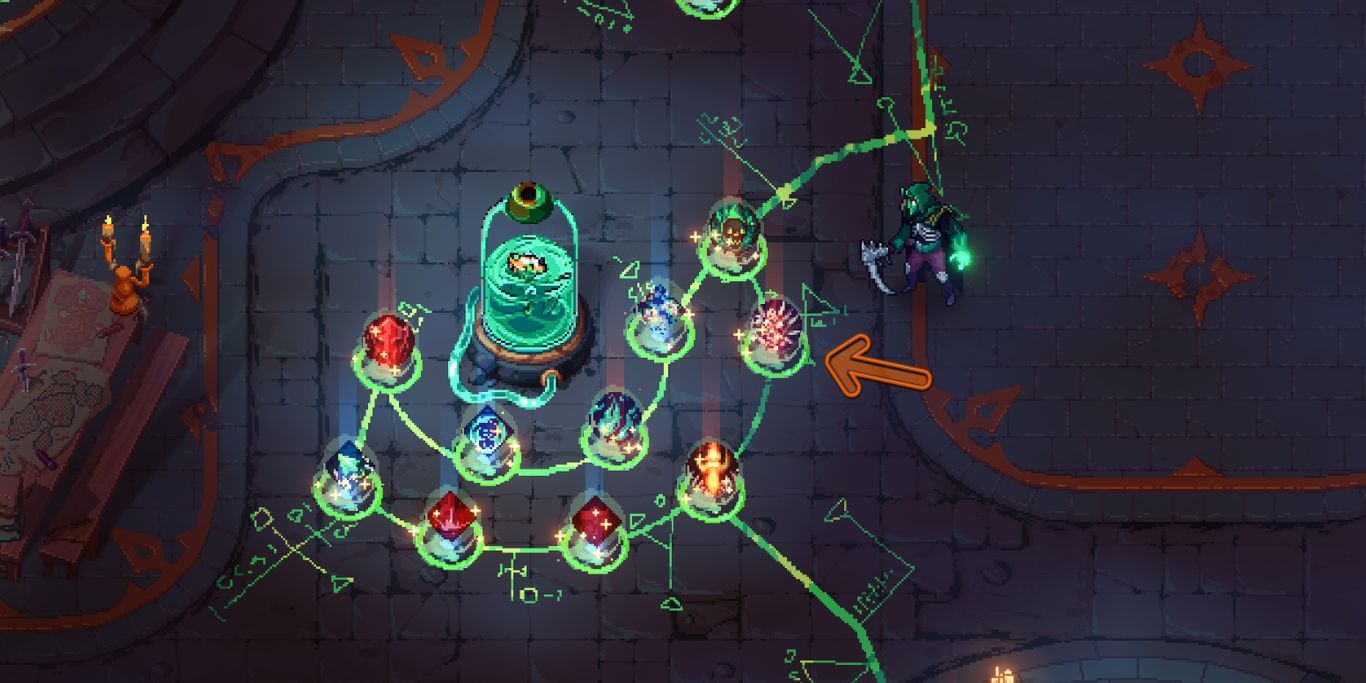 A spell that is easier to unlock, Bone Wave can be found in the third group of Arkhe upgrades. You'll be able to get it as the second upgrade in the group as well. As the name suggests, it uses the bones to create a wave that goes for a small distance in the direction of your cursor.

This wave will push away the enemies it hits, and damage them. While this is not the most potent spell in the game, it can be used quite frequently. It's also perfect if you're having trouble staying away from the enemies because you have an aggressive play style.

The only problem is the inability to deal damage at a longer range. The waves created by this ability form a triangle that has a total of three rows in it, and it wouldn't have any effect unless you're at a distance where the enemies can also attack you easily. 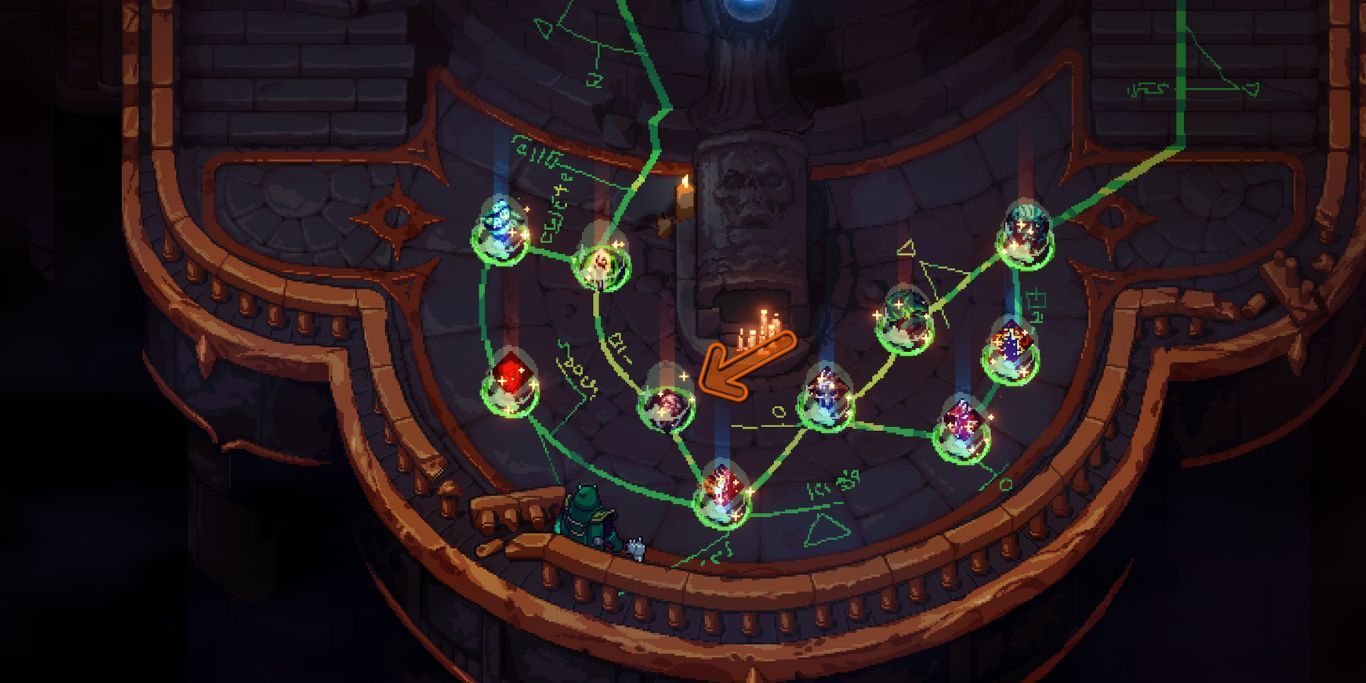 This amazing spell is located in the fifth group of Arkhe upgrades, but it can get quite tricky to upgrade them. If you manage to get the Bone Shard from Apotheosis at Burial Isle before you reach here, you'll most likely be spending your Arkhe to upgrade the circles near the portal at the top.

When you activate The Lord of Mad Bones, The Necromancer will create a chimera at the position of your cursor that will use bones to create projectiles. These projectiles move around in a certain area, constantly dealing damage to the enemies inside. Although, it has quite a long cooldown.

Another thing to note with this spell is that it doesn't deal a lot of damage to the enemies. It's perfect for scenarios where a giant group has emerged from a hatch behind your army and you're getting overwhelmed, but it won't do much against single targets. 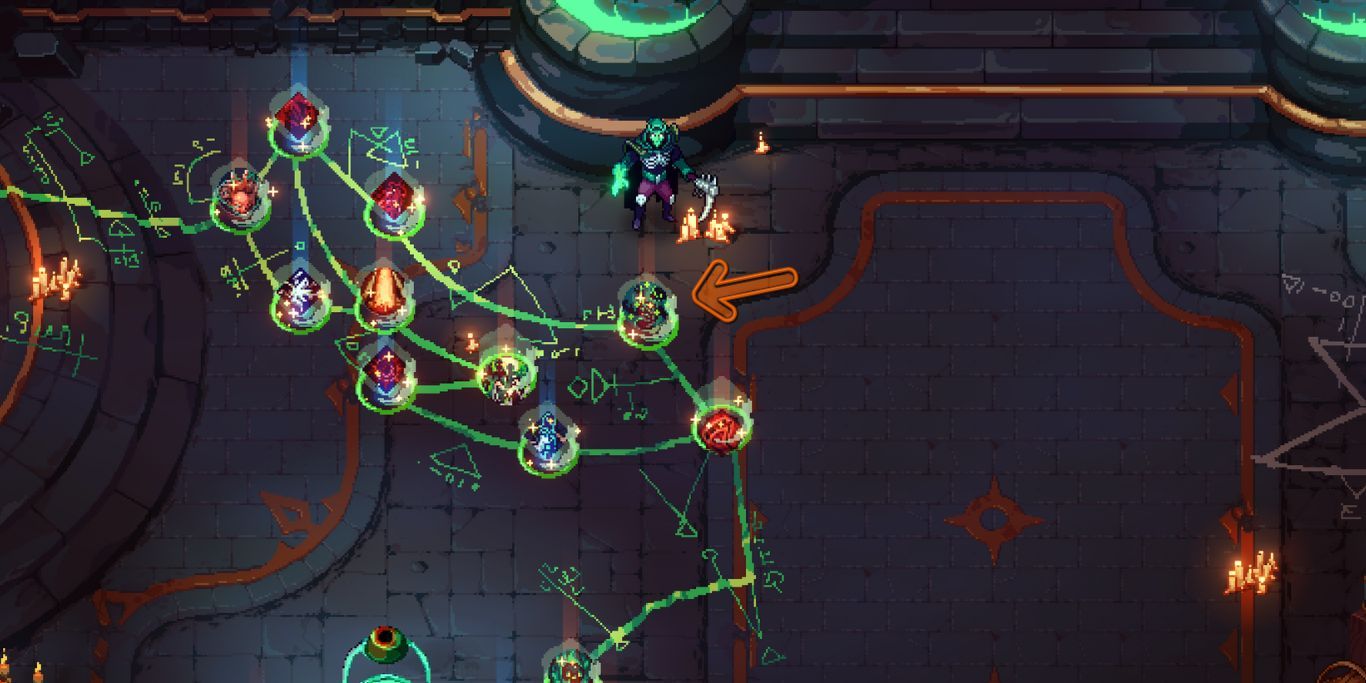 Another spell that is easy to unlock, Bone Implanting can be found towards the end of the second group of Arkhe upgrades in Edge of Immortality. When your army is dealing with a wave of enemies, it can be quite hard to use Cleric's ability to prevent them from dying.

Furthermore, there's a limited number of Clerics you can have in your army, and they get sacrificed permanently if you try to heal your army with them. To avoid this, Bone Implanting can be quite a game-changing spell for a lot of players out there.

Placing this ability doesn't require any bones itself, but you'll need bones around if you want to get value out of it. When this ability is used, it allows the undead in an area around your cursor to self-heal with the surrounding bones. It's great against a big group of enemies or singular enemies that deal a lot of damage. 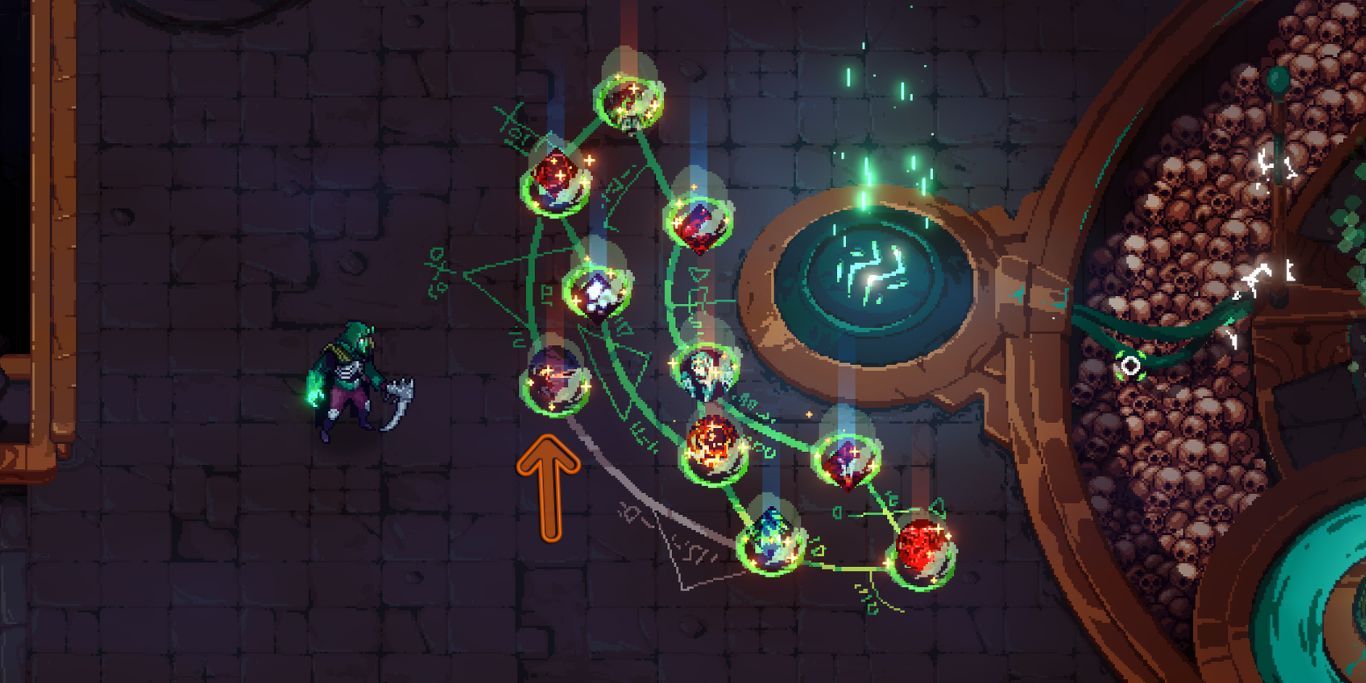 Bonethrower is one of the few good spells that are unlocked at the start of the game. It's located at the top beside the portal you'll be using to head into your next raid. Similar to The Lord of Mad Bones, this spell also creates a static chimera at the location of your cursor.

The difference between the two is that you'll need bones to place the chimera in the first place when it comes to Bonethrower. Once it's placed, it will constantly attack the enemies in a large area with bones. It doesn't consume extra bones after being placed.

Bonethrower is great for almost every scenario because it can get rid of multiple enemies quickly, and it can also delete the health of a tanky enemy. Along with its short cooldown, this spell is one of the best for extra damage in the game.

One of the best uses for this spell is against a Commander in Caredhwaithian Mires, the second area of The Unliving. His special ability has a huge AoE, and it also has a shield that you need to deplete. One Bonethrower can get rid of the Commander within seconds, avoiding the loss of your undead army.