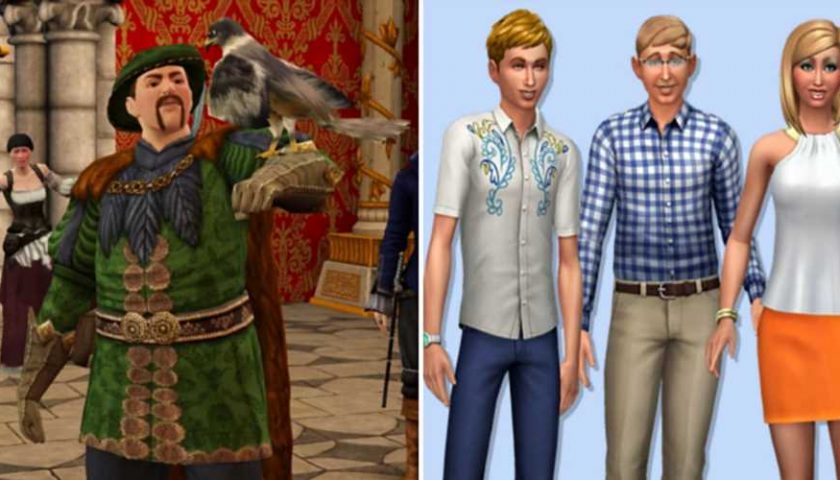 If you’re looking for the most prolific family name in Sims history, look no further than the Landgraabs. Not only do mentions of the family go back to the original game for PC, but the Landgraab family has been around even long before that, dating all the way back to SimCity 3000, released in January 1999.

But while their wealth and status has remained the same throughout the years, the Landgraab family itself changes with each installment in the series. The canonical timeline is rather jumbled, but we wanted to look back and see exactly where this mega-rich, illustrious family has come from. 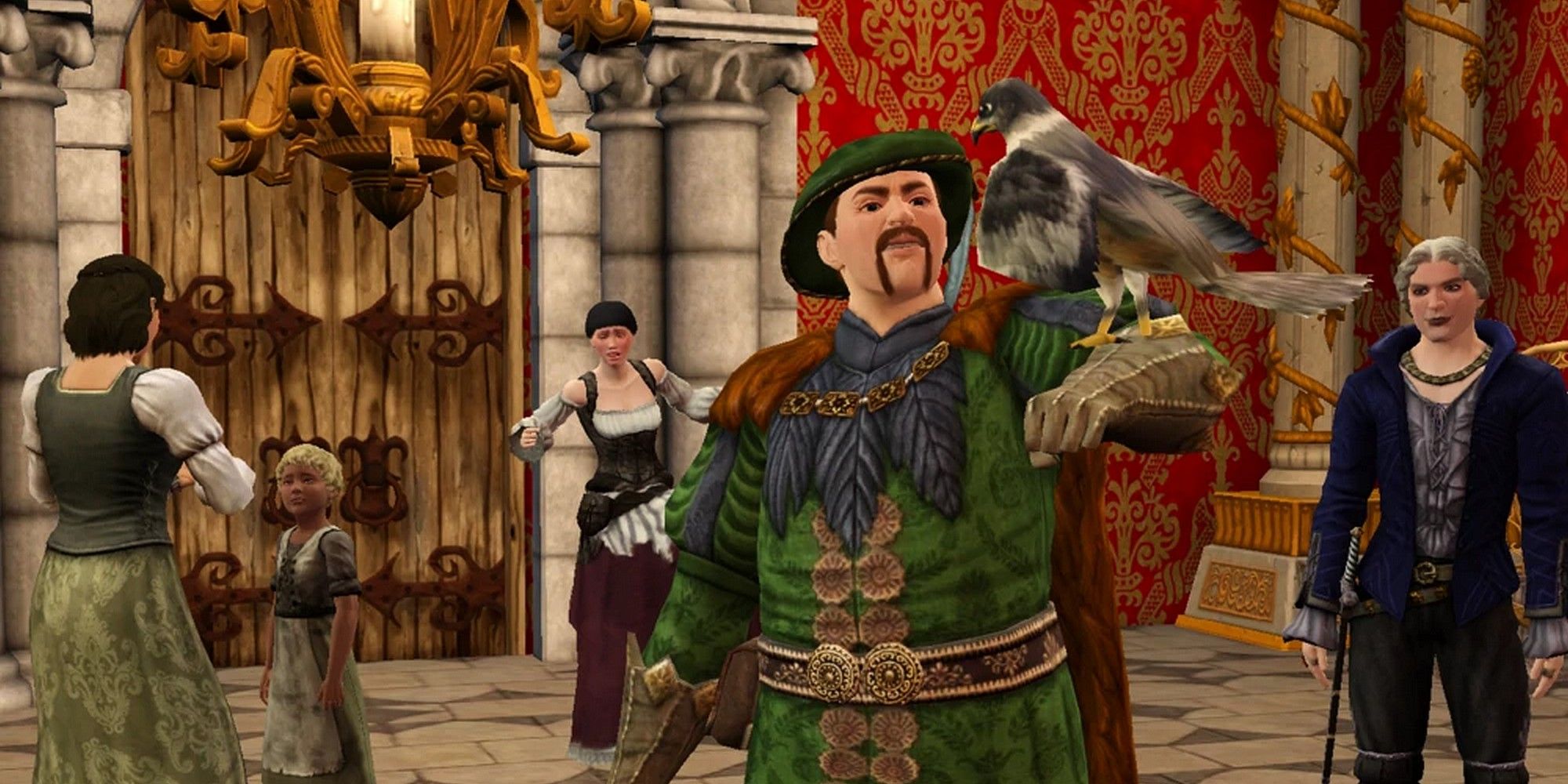 There are quite a few infamous Landgraabs who appear either in canonical mention in The Sims universe or in nods in auxiliary games. The eldest Landgraab mentioned in the core series was from The Sims 2: Seasons, where a chance card mentions a Gregory Landgraab who came into a massive fortune, which he spent on property.

Another example of the family’s riches came in The Sims Medieval: Pirates and Nobles, wherein they’re the owners of one of the wealthiest cities in the overworld. Demetrius and his son, Dacian, are at war with the neighboring town, and your player Sim can choose a side in the battle. This history of wealth does contradict what we learned about Gregory, though, as a Medieval setting would mean these two are the eldest Landgraabs.

Finally, we’ve seen Admiral Landgraab mentioned in both The Sims and The Sims 3, though never with a proper first name. In The Sims: Vacation, it’s mentioned that one of the spots on Vacation Island is said to be his first conquest. You’re able to purchase a portrait of Admiral Landgraab in the game as well. He’s mentioned again in The Sims 3: World Adventure, having a booby-trapped tomb lot in Champs Les Sims called Chateau du Landgraab.

These mentions give the family an origin story, a place where their expansive dynasty began. In SimCity 3000, the family is renowned for their wide portfolio of land ownership rights, primarily with residential lots in both SimCity and The Sims: Bustin Out. However, in the PC games, we see the family more involved in commercial properties instead, with their name on several buildings and lots around each of the towns. 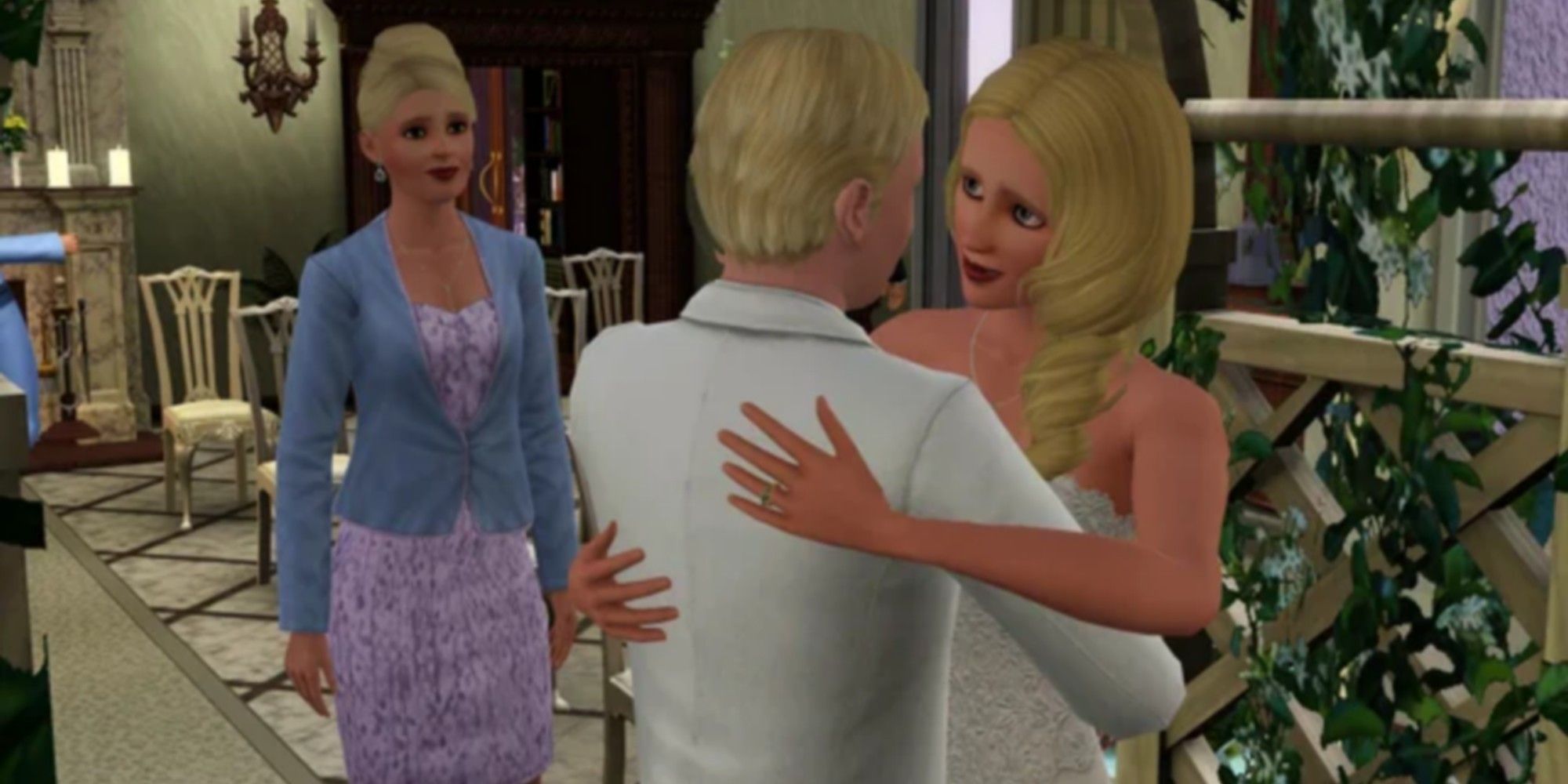 While we really only get to see this iteration of Malcolm Landgraab in the console versions of The Sims games, his role is exceptionally different in each one.

In The Sims for console and The Sims: Bustin Out, he’s the richest man in town, escalating you from house to house as you fix them up on his behalf before he sells them for a profit. He’s got two children, Dudley and Mimi, and neither exactly have that Landgraab ambition. They’re both stereotypical rich kids, living fast lives as party animals and not caring much for anyone else. You’ll live with both of them at various points, and both are remarkably terrible roommates.

Things are much different again by the time The Sims 3 for console begins, though. In it, Malcolm is married to a woman named Hannelore, and they have a son, Adrien. His lifetime wish is to be the Leader of the Free World, and he’s moved his family to Moonlight Bay with the intention of running for public office, spreading the Landgraab name ever further. 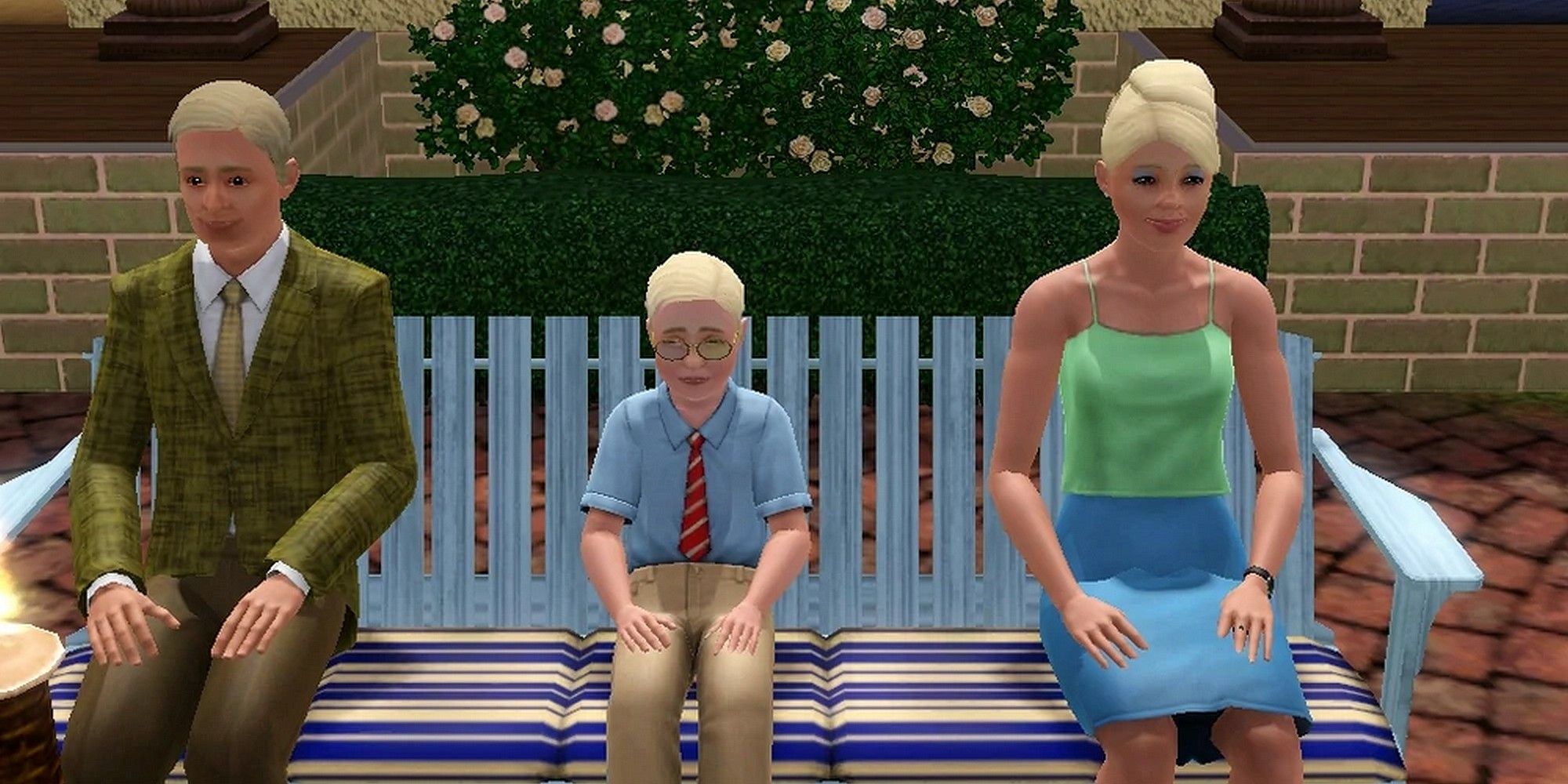 With The Sims 3 being the first game in the canonical timeline, we can learn a lot about the Landgraabs from it. They live in one of only three pre-made manors in Sunset Valley, and Nancy carries the family’s wealth into a new generation, living with her husband, Geoffrey, and their child son, Malcolm.

With her parents, Chester and Queenie, both deceased when you load in, Nancy is the head of the Landgraab family, employed as a Vice President. Her traits lend to this as well, with the game labeling her as a Workaholic, Snob, Ambitious, Charismatic, and a Perfectionist. Her lifetime wish is to become the CEO of Mega Corporation, and, sitting as Vice President when you load into the family, she’s already pretty close.

However, the Alto family also has skin in the game, with Nick Alto also being a Vice President, and you’ll see the two of them in constant competition for the title of CEO. It usually goes to Nancy, if you’re playing with story progression turned on, but you’ll find her with a distaste for almost the entire Alto family because of it. She’s not friends with Holly Alto, the family's teen daughter, but she’s also not enemies with her, either – and for someone as cutthroat as Nancy, that might be the best she can manage.

Prior to The Sims 3, Nancy married Geoffrey Osteer, who took her last name for its status (Nancy doesn’t strike us as the type to compromise). He’s Family-Oriented, Charismatic, a Hopeless Romantic, he Loves the Outdoors, and he’s incredibly Family-Oriented. He’s employed in the medical career, but still makes time for the couple’s son, Malcolm.

Nancy is hell-bent on making Malcolm into a proper heir for the family’s fortune, but while he does like both of his parents, Malcolm is notedly closer to Geoffrey. Reading Malcolm's bio indicates an unwillingness to become a tycoon like his family lineage all but dictates, as he’s a well-behaved bookworm who seems to appreciate the quieter parts of life. 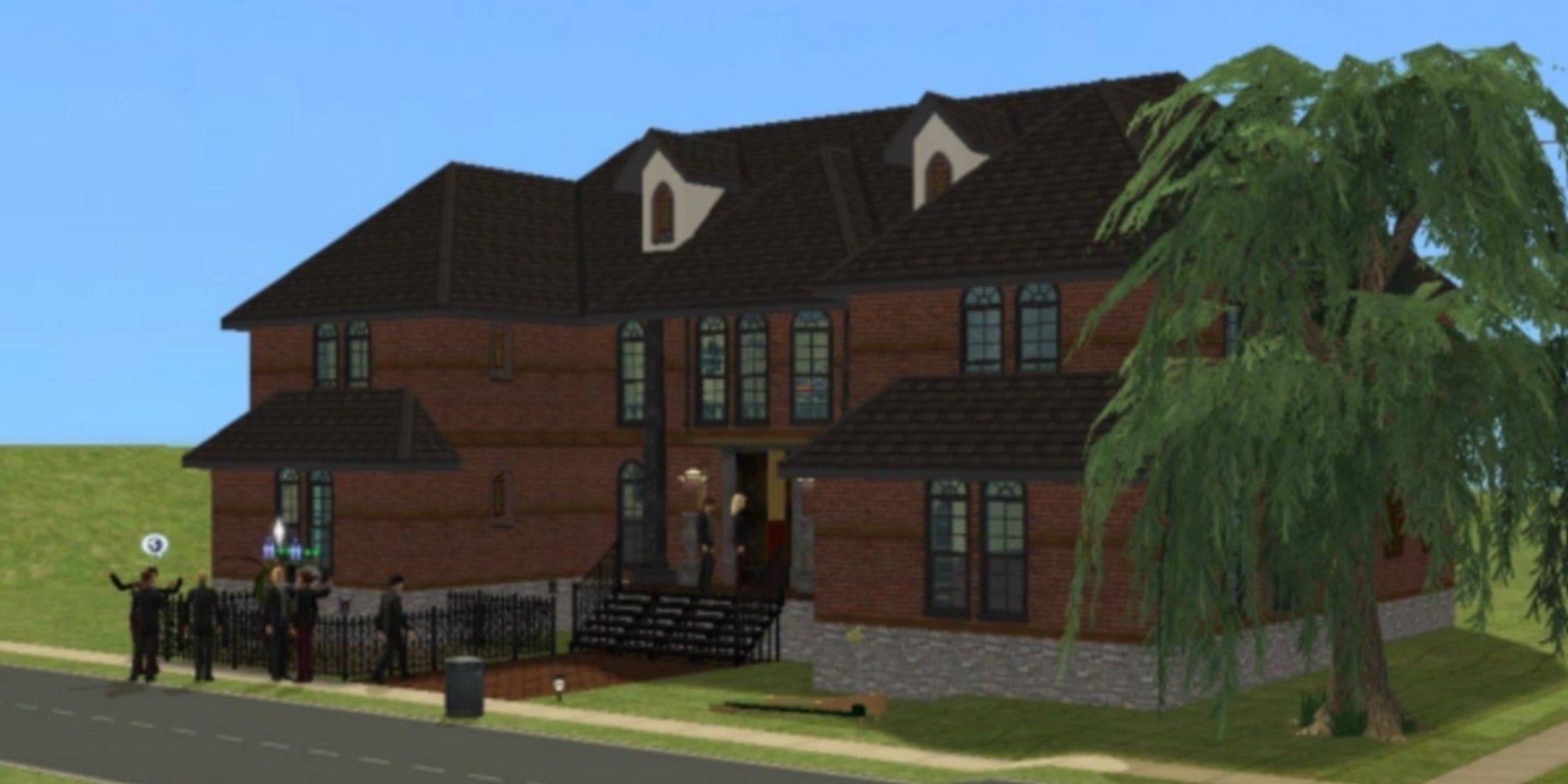 While the Landgraabs themselves didn’t appear in the base game, they are indeed present in some capacity once you get into the expansion packs. If you enroll your Sim at Sim State University after installing the University expansion, you’ll see one of the dorms named for the prolific family, implying they’re either alumni or generous donors. Additionally, if you’re exploring the secret societies present but invisible on each campus, you’ll find the Landgraab Society at the same school as well.

Once you’ve installed Open for Business, you’ll meet Malcolm Landgraab IV, who lives in a colossal estate in Bluewater Village. His liquid assets are relatively average for a family in the game, but the belongings housed in his mansion are all worth quite a few Simoleons. In this pack, he's the owner of Club Dante, as well as the Electronics Supercenter. 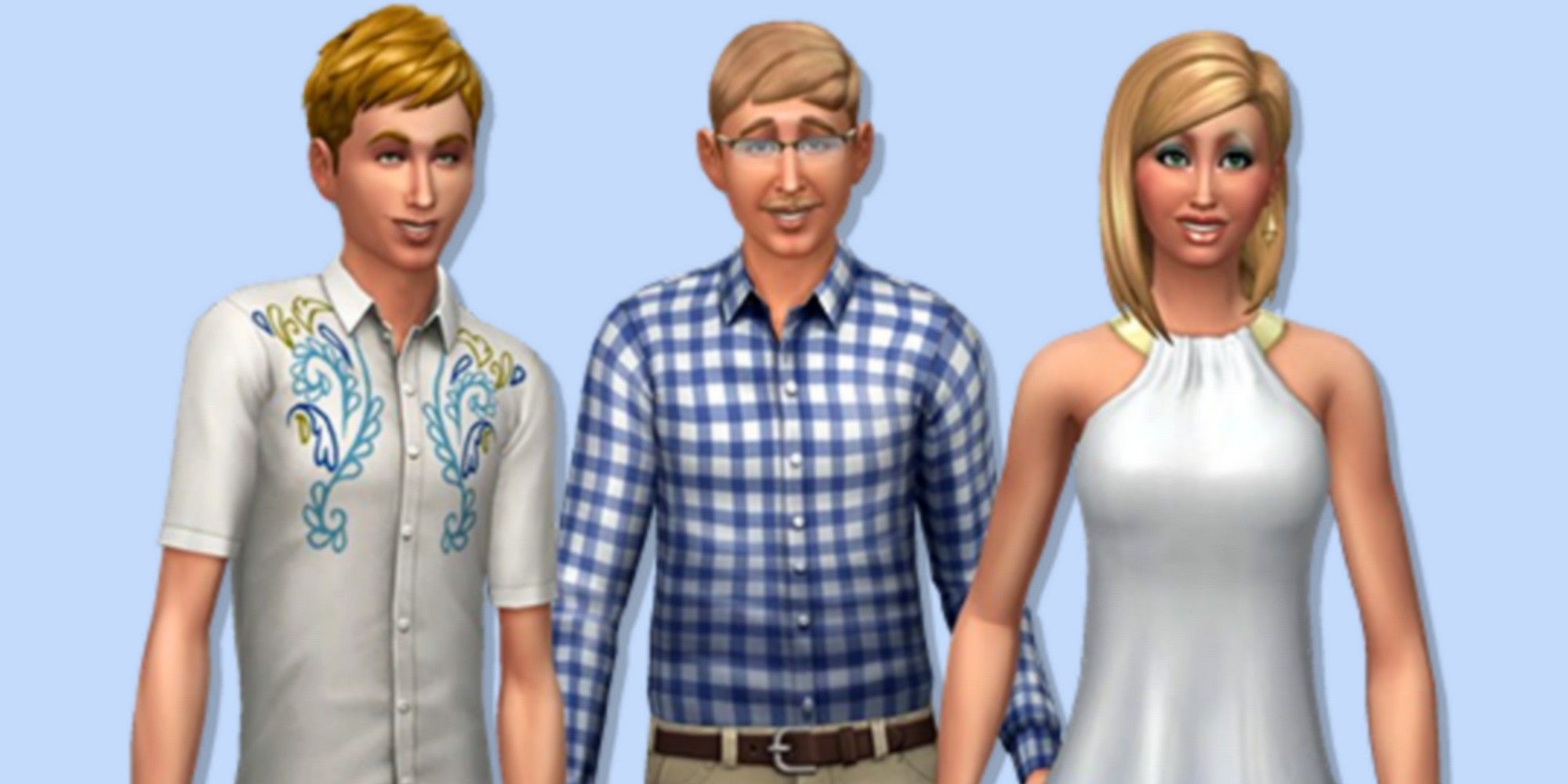 Though The Sims 4 is canonically an alternate reality, it’s another game where we get extensive exposure to living Landgraab family members. Once again, the primary Landgraab family consists of Nancy, Geoffrey, and Malcolm, living in an oversized mansion in Oasis Springs.

Nancy remains focused on money and prestige, but she’s going about it a little differently. Now, she’s in the Criminal career, employed at level five as a Minor Crimelord, the final general position before choosing to specialize as either a Boss or an Oracle. She’s still aspiring to be Fabulously Wealthy, and with her traits being Ambitious, Snob, Materialistic, and Business Savvy, Boss seems a much more fitting path for her.

Geoffrey has changed careers as well, and is, interestingly enough, a Lead Detective in the Secret Agent career. Some investigator he is, though, if a major criminal is living with her spoils in his house, sleeping right beside him. Though, his traits are Domestic, Family-Oriented, Outgoing, and Good, so maybe he just wants to keep Nancy at his side and chooses to look the other way.

He’s aspiring for a Successful Lineage, but the couple’s son, Malcolm – now a teen in this game – seems reluctant. While he was Good when we met him as a child in The Sims 3, alternate reality Malcolm is Evil, Dastardly, and a Snob, with the ambition to become a Public Enemy. This aligns him more with his mother than his father, unlike in the previous game.

There was a second Malcolm Landgraab introduced by Maxis that likens him more to his console appearances. This Malcolm is a ridiculously wealthy elder working as an Angel Investor, who has reached the maximum levels of both Charisma and Mischief. His children, Dudley and Mimi, are also present and are incredibly in-line with their console appearances, too, both lazy party animals once again. Malcolm also has a wife, whose name is still, after all this time, just Mom.

However, these aren’t the only Landgraabs in The Sims 4. Though you’d never know it simply playing the game, reading the biography for Johnny Zest, who lives in a trailer not far from the Landgraab estate in Oasis Springs, reveals that he’s a long-lost Landgraab. It doesn’t specify exactly how he’s related to the family, but prevailing theory among fans is that he’s the disowned older son of Nancy and Geoffrey. His bio explains that his family disowned him for pursuing a career in comedy, and his home and likeness are both eerily similar to Dudley from the console games.