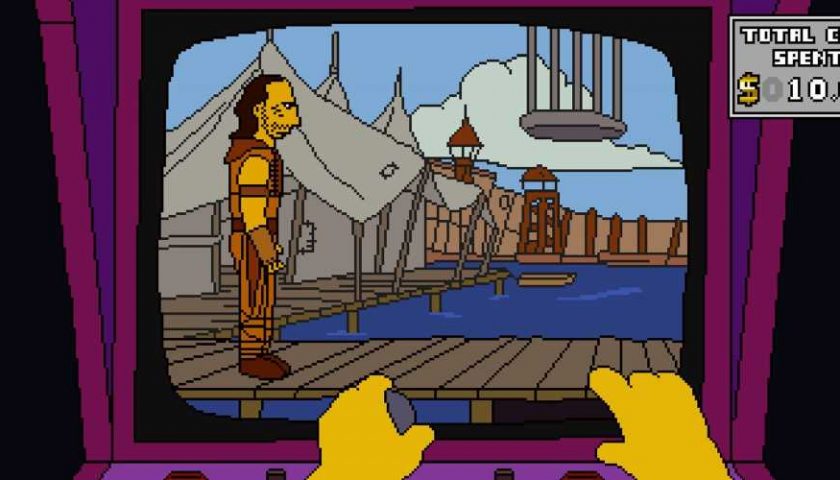 Even the most casual Simpsons fan will probably remember a moment from a 25-year-old episode where Millhouse plays a fictional arcade game adaptation of Waterworld. Fascinated by what lay beyond the one step Millhouse is able to take, someone has created a fully fleshed-out version of the game based on that one screen shown in The Simpsons.

As reported by VG247, Macaw45 is the developer responsible for the full version of a game that never actually existed until now. “I've always been fascinated by the fake videogames that were occasionally seen in The Simpsons, and the Waterworld one always stuck out to me as a kid,” the game's description page reads. The very same page where you can download and play the game right now.

For anyone unfamiliar with the scene from The Simpsons Macaw45 took inspiration from, it shows Millhouse diligently inserting 40 quarters into an arcade machine. That allows him to play, but after taking one step, he is met with a game over message and told he needs to insert 40 more quarters to keep playing, which he then proceeds to do.

The bit was a way of mocking the movie on which the fictional game was based which had flopped at the box office two years prior. An insinuation that Universal was attempting to recoup some of the money it lost from the Kevin Costner flick 40 quarters at a time. As for Macaw45's expansion of that based on that one step, they explain that what started as a small project eventually became one in which they created an entire game. One that includes various secrets and even appears to have multiple endings.

When it comes to Simpsons video games, Macaw45's Waterworld might be the closest you get to anything new for quite a long time. Despite the demand for a Hit & Run remake, and one talented fan taking matters into their own hands, there doesn't seem to be anything official on the horizon.