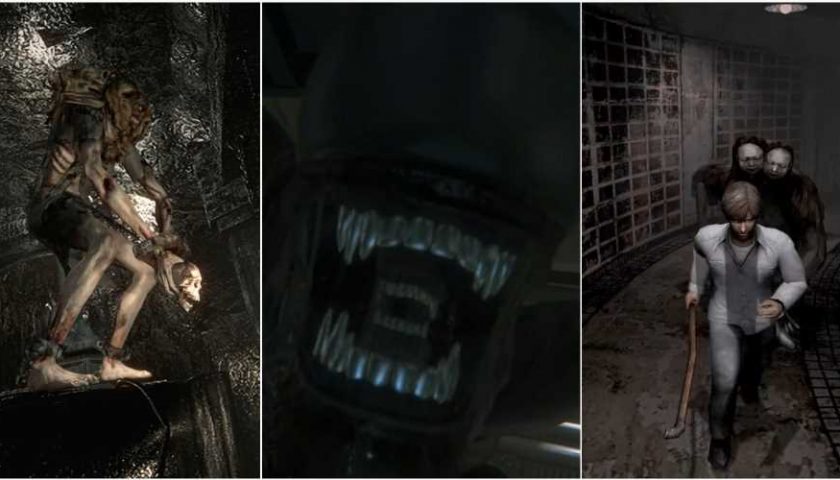 Through the years, horror games have scared us by throwing us into unsettling environments and tense situations where we must sneak, hide and fight to escape with our lives.

The denizens of these terrifying environments are often formidable, testing your ability to power through them. These monsters are the stuff of nightmares and will come at you in droves, either using jump scares or disturbing movements to give you the thrills you desire. They are one of the most memorable parts of their respective series, and their unnerving designs will stick with you – whether you want them to or not.

10 Can I See Your Hall Pass?: The Lantern Specter (Detention) 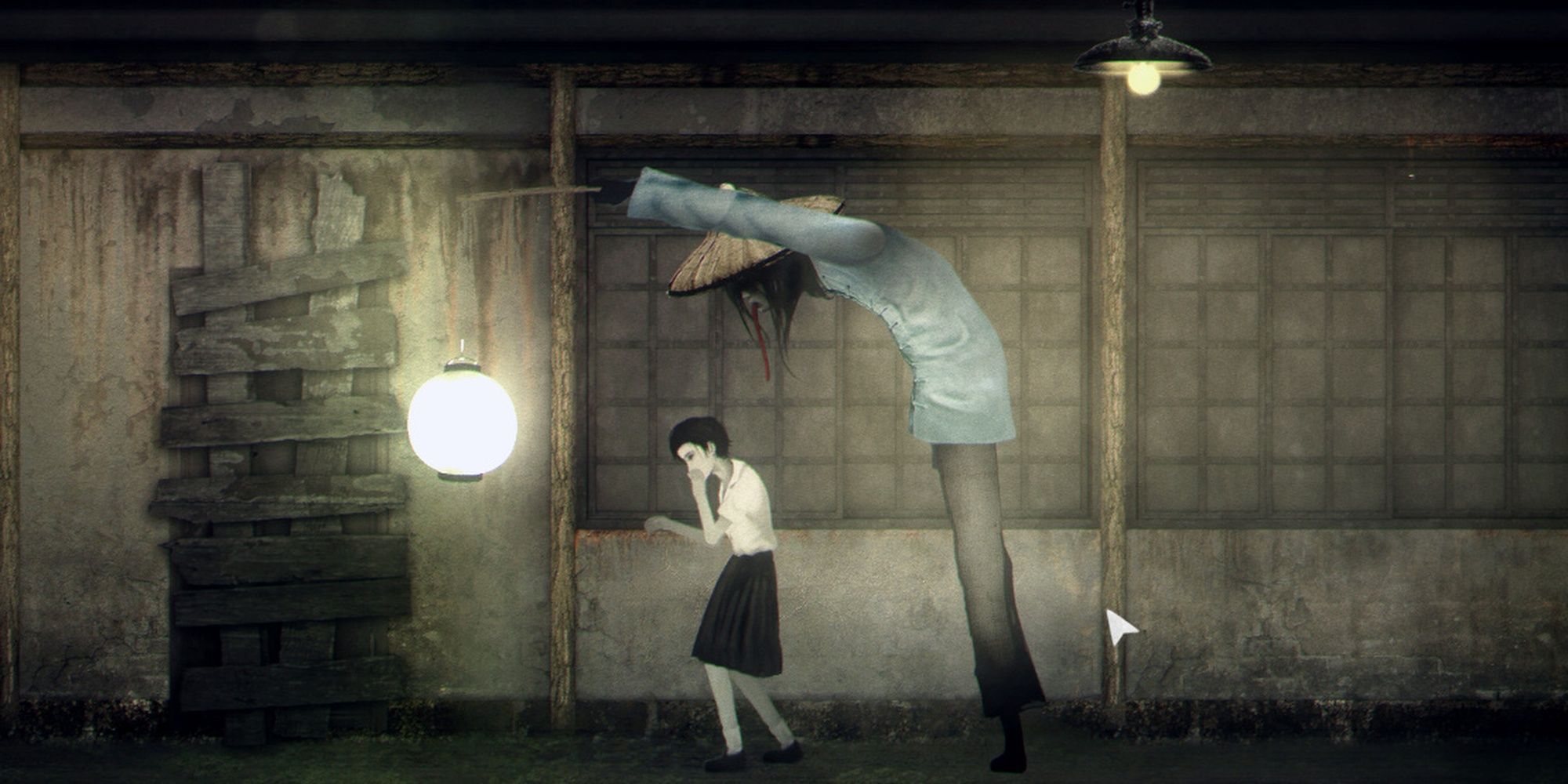 Detention is a unique horror game set in 1960s Taiwan during the White Terror and does a perfect job of blending together its monsters with the real-world horror occurring in this time period. The Lantern Specter is one of the Lingered you can encounter in Detention and can be found roaming in the school.

This specter is a spirit that towers over you and requires you to hold your breath as it slowly makes its way past you, resulting in some tense situations where death is but a gasp away. It’s particularly memorable due to its elongated humanoid body, which imbues a sense of wrongness, and its gameplay mechanic that requires you to stand still and hold your breath, with no way of defending yourself against this scary figure. 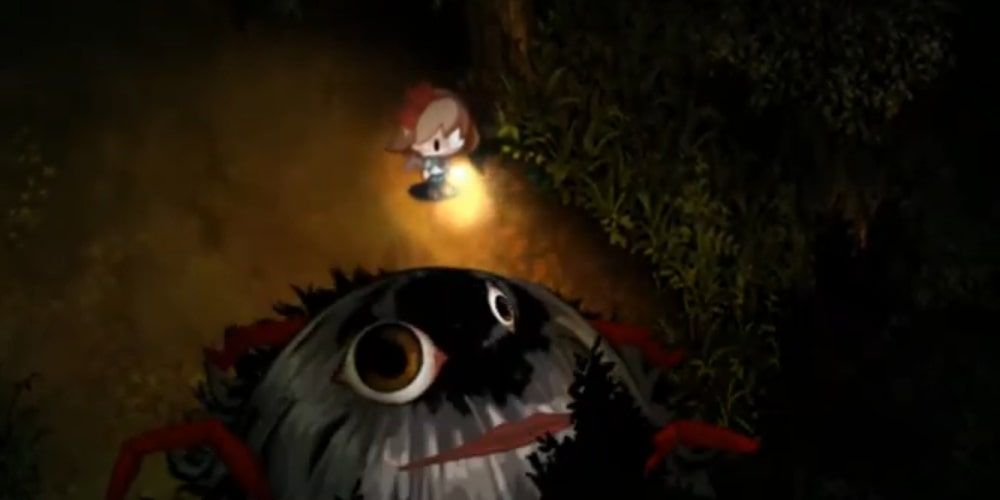 Don’t let this series’ cute art style fool you. In Yomawari, you wander around a town filled with spirits that pose a threat to you as you explore the game’s creepy environments. One such spirit you can encounter is the Road Blocker – large, spider-like spirits who block paths to stop you from reaching your desired location.

These spirits aren’t that dangerous, as you can effortlessly outrun or hide from them, with their main gimmick being to block the path so that you have to take an alternative route. Regardless, their huge bodies, spider-like limbs, and permanent grins make them one of the more distinctive spirits in the game, and a nightmare for anyone with arachnophobia. 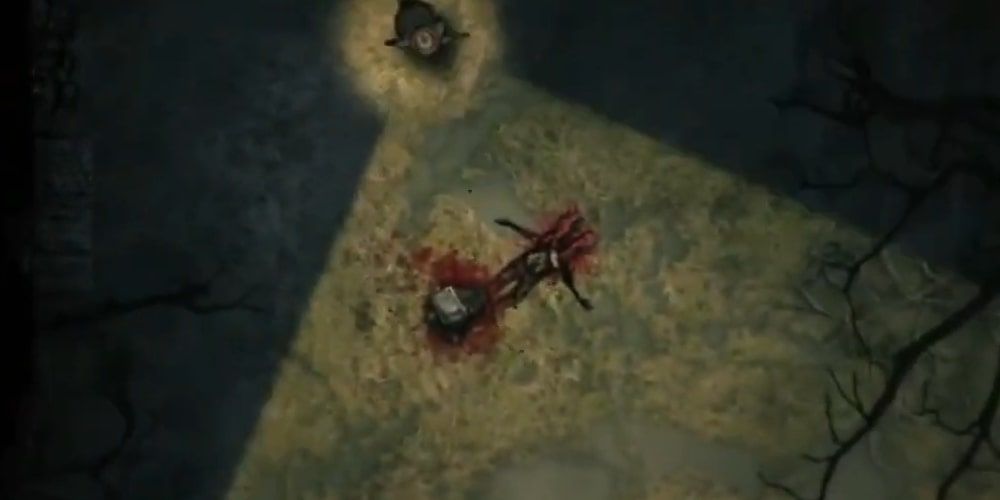 In a fresh take on the horror genre, Darkwood is a top-down survival horror game that involves you exploring the world by day and hiding away at night in hopes you live to see the coming dawn.

Red Chompers are one of the most dangerous monsters that can be found in the game and will attack you on sight, even attempting to chase after you when cut in half. Design-wise, these plague-mutated people resemble Palmer-Thing from John Carpenter’s The Thing, with a humanoid body and a split head that’s lined with deadly teeth. They have the two features that make horror game monsters so great – a creative design and the ability to pose a genuine threat to you.

7 Time To Leg It: Laura (The Evil Within) 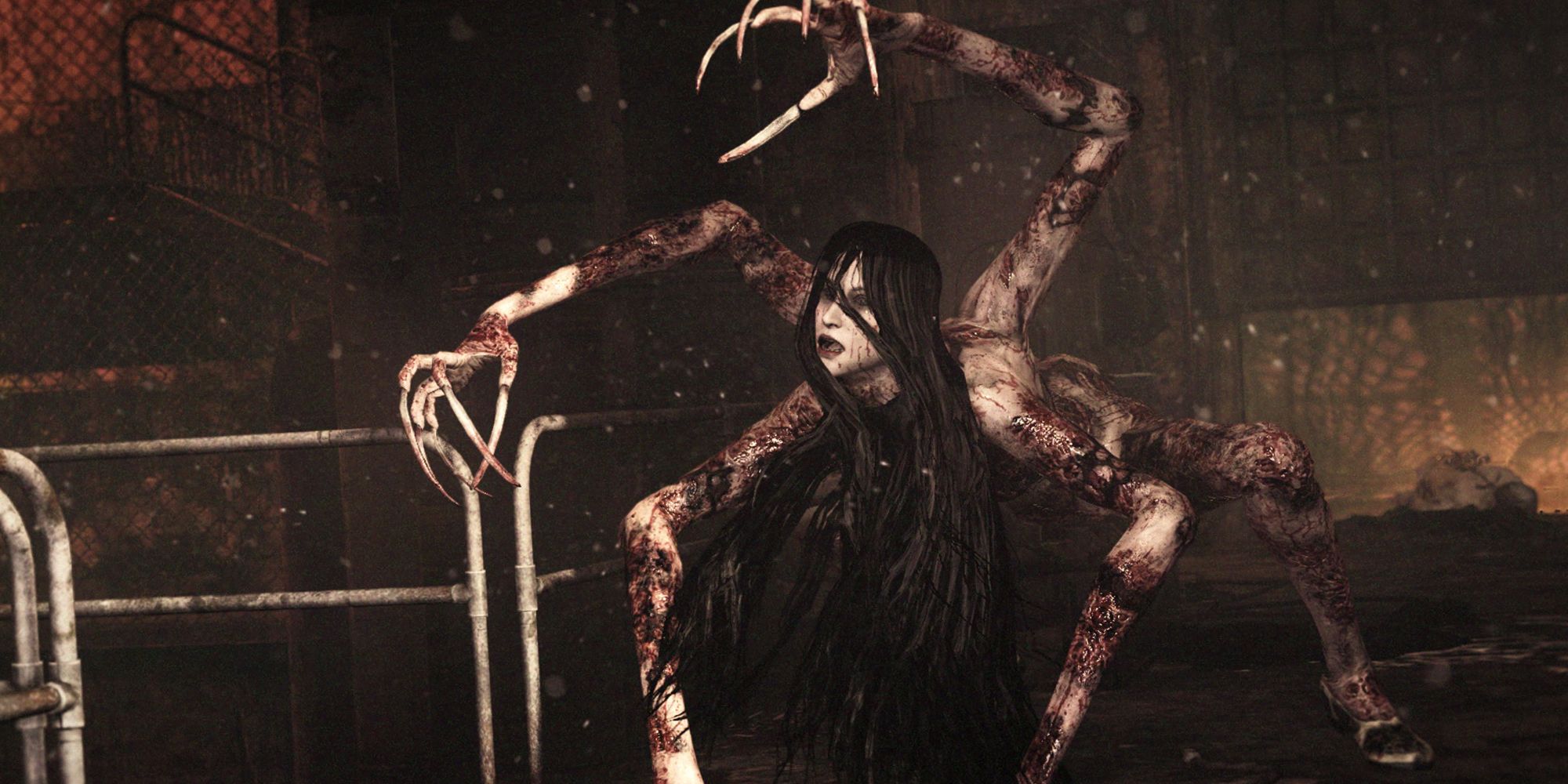 Laura from The Evil Within is a warped reincarnation of Laura Victoriano, taking on the appearance of the Jorōgumo, a spider yokai, that can change into a beautiful woman. This disturbing amalgamation of a young girl, still wearing braces, with the distorted clawed limbs that protrude from her body to mimic that of a spider leaves you feeling unsettled every time you encounter this enemy.

What makes this monster so scary, though, is her genius yet unsightly design and the terror she imbues, being both fast and powerful. You definitely wouldn’t want her crawling towards you in a dark alley. 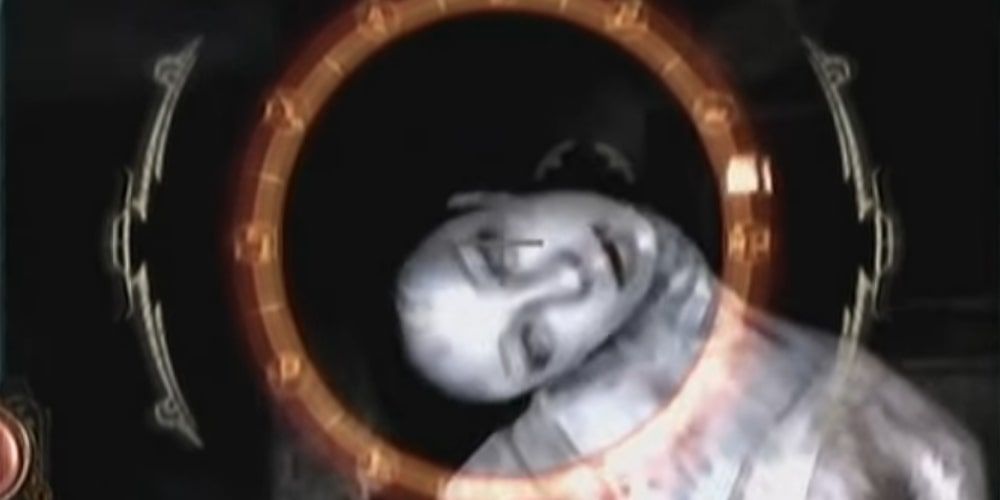 The central premise of the Fatal Frame series is using the Camera Obscura to fend off lingering spirits and to use its ability to exorcise entities. One spirit you can capture on photographic film is the Broken Neck Woman who, like her name suggests, has a broken neck, painfully bent at an unnatural angle.

In terms of appearance, this ghost takes after Japanese horror movie icons like Sadako and Kayako, being a woman with long black hair and wearing white clothing. Her blank stare is disquieting, and her neck, broken by the traumatic way she died falling from Heaven Bridge, makes encountering her memorable in all the wrong ways. 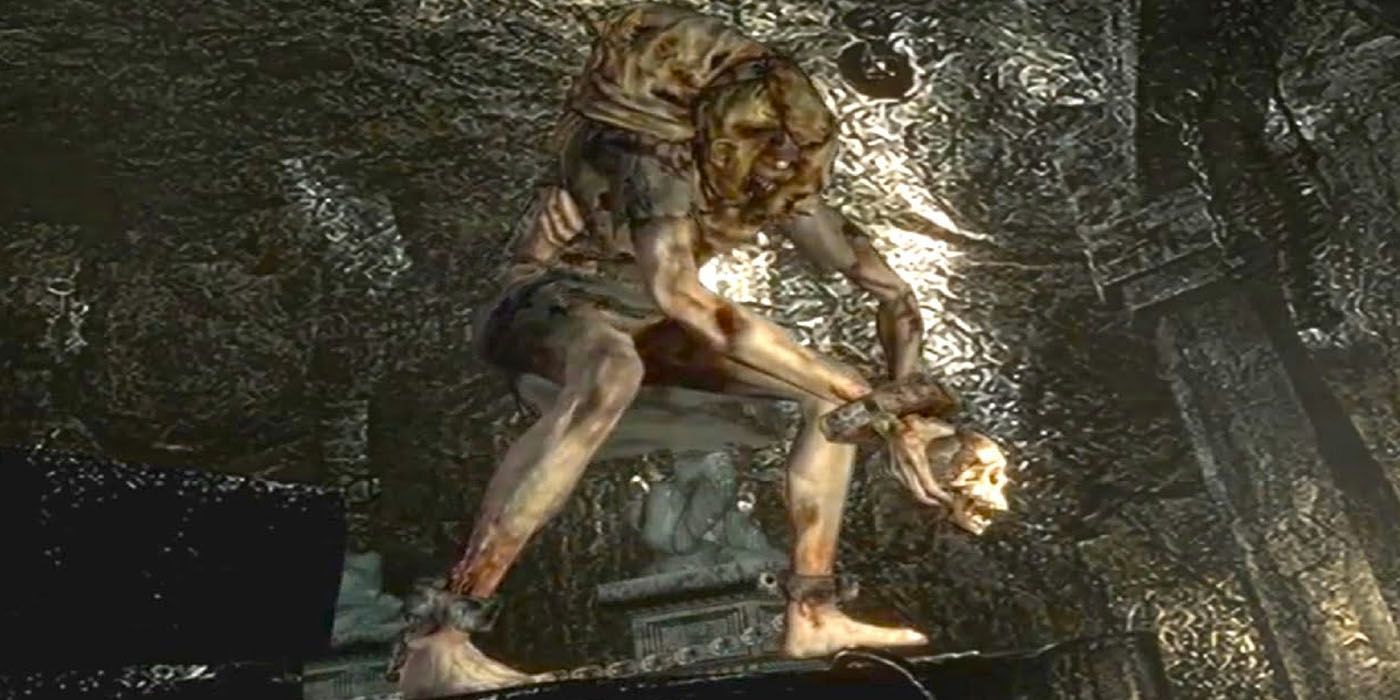 The backstory of Lisa Trevor is a tragic one, being imprisoned and experimented on by the Umbrella Corporation researchers who left her horribly mutilated. Due to the Progenitor virus, Lisa was given powerful regenerative capabilities, making her a formidable foe as she’s able to survive everything you throw at her.

Over the years, Lisa’s mental stability faded, leading her to lash out at those around her, severing the face of a woman she believed had stolen her mother’s face. Lisa’s mask made out of human faces would give even Leatherface a run for his money. 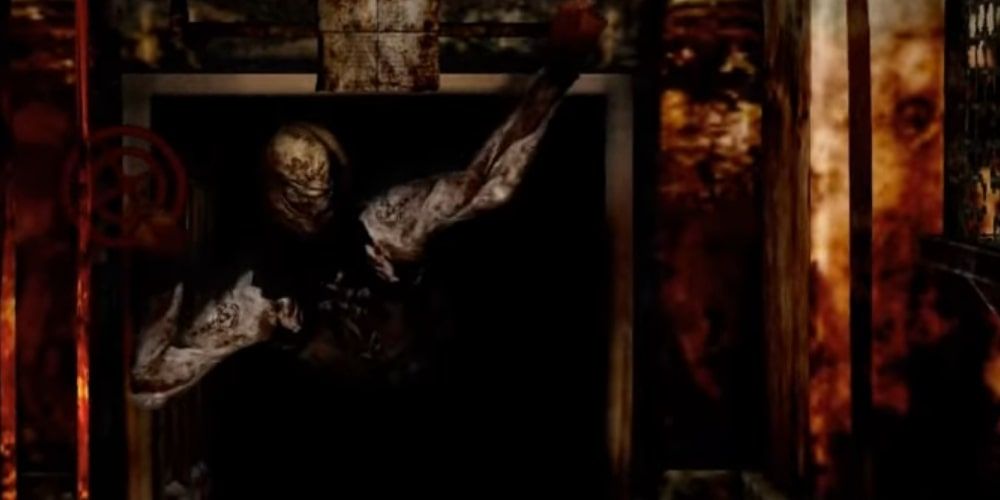 The Silent Hill series has many of the best-designed monsters that horror games have to offer, and Valtiel is no exception to this. Valtiel is a servant of God and observes Heather throughout Silent Hill 3 to make sure that God is delivered.

Masahiro Ito’s incredible creation is disturbingly human in appearance, sporting a leathery face that appears to be stitched together, the Seal of Metatron on both shoulders, and clothing that resembles a butcher’s apron. The jolting movement of its head is particularly horrifying and is reminiscent of the imagery from the 1990s horror movie Jacob's Ladder, that’s cited as an inspiration for Silent Hill. Valtiel definitely captures what makes this movie so eerie. 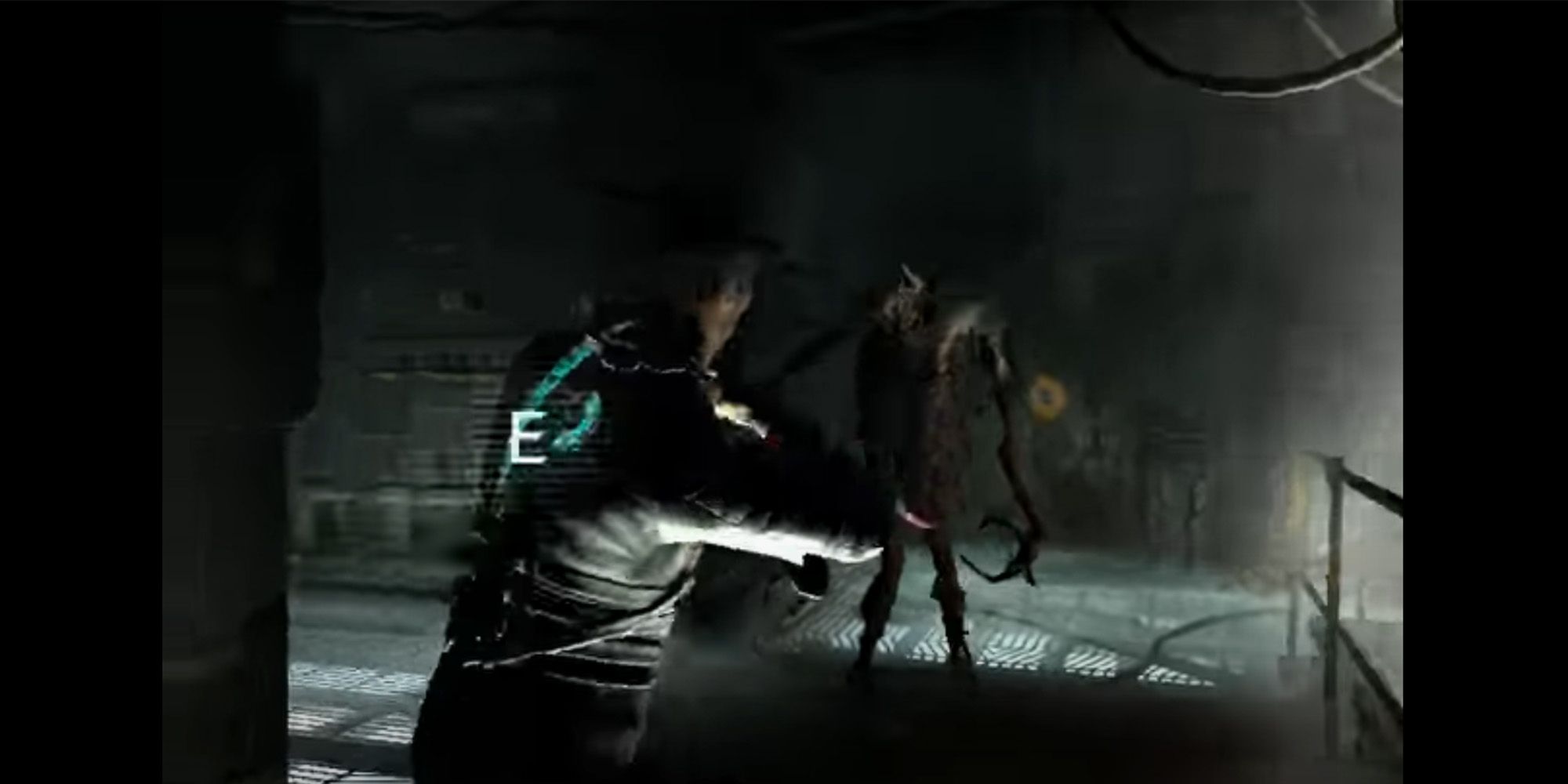 The Dividers of the Dead Space series are long Necromorphs, capable of splitting their body into smaller creatures able to attack you. They have a gaunt, slender appearance and again take inspiration from John Carpenter’s The Thing – with their head, arms, and legs being able to become separate creatures like the movie’s entity.

The unique way they dispose of you – suffocating you, cutting off your head, then attaching themselves to you so you become their new host – is particularly chilling and will provide you with the body horror needed from the horror game genre.

2 They Don’t Come In Peace: The Xenomorph (Alien: Isolation) 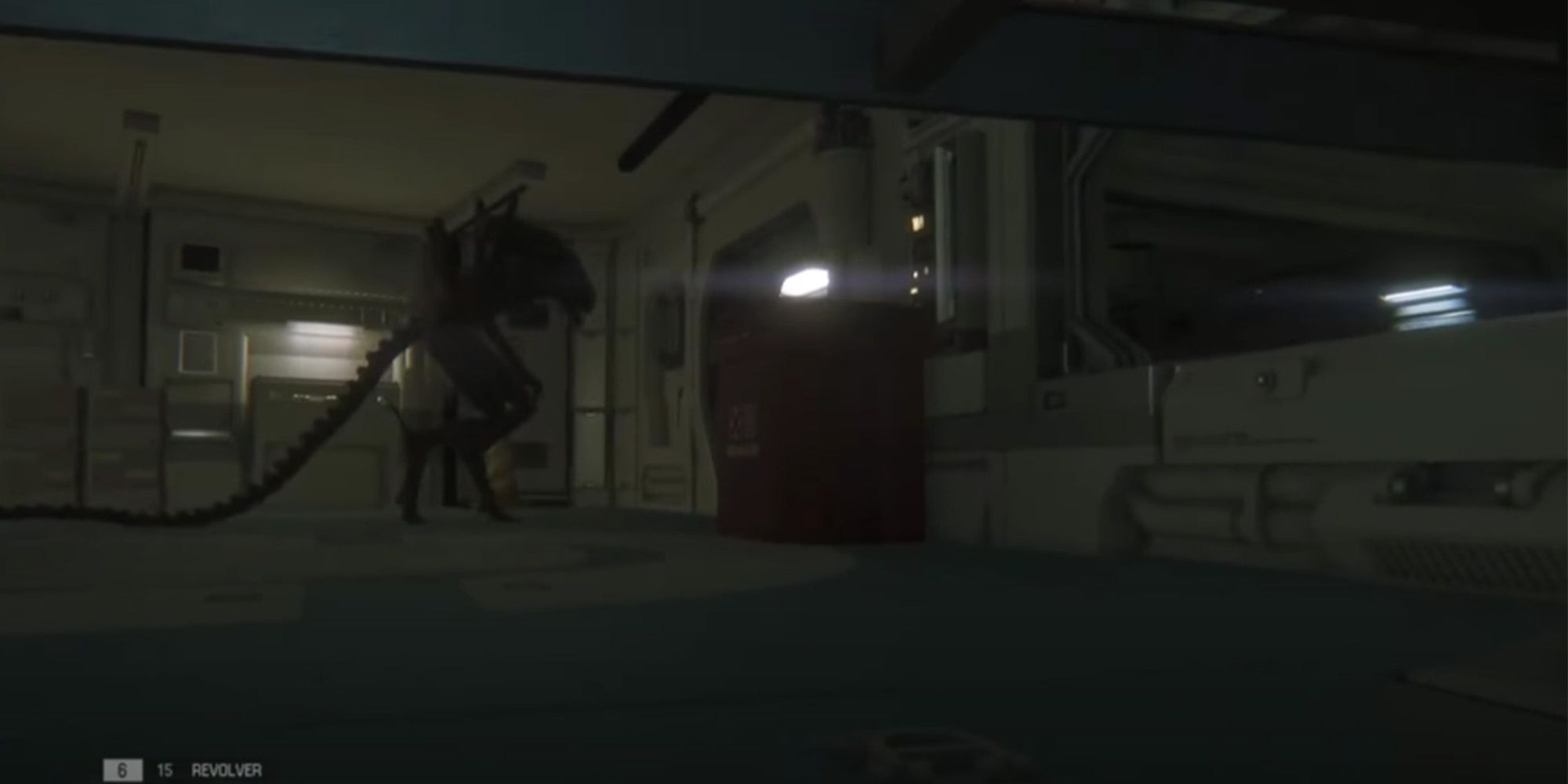 Alien: Isolation is a first-person survival horror game set between the movies Alien and Aliens that follows Ripley’s daughter, Amanda, as she attempts to investigate the disappearance of her mother, leading her to encounter the terrifying Xenomorph.

The Xenomorph of Ridley Scott’s science-fiction horror masterpiece makes its horrifying return, this time with you as its target. The sheer size and power of this alien life form is intimidating, and the game creates lots of intense situations where you must hide from this monster, knowing that the slightest sound could alert it to your position. The Xenomorph definitely lives up to its legacy on the big screen. 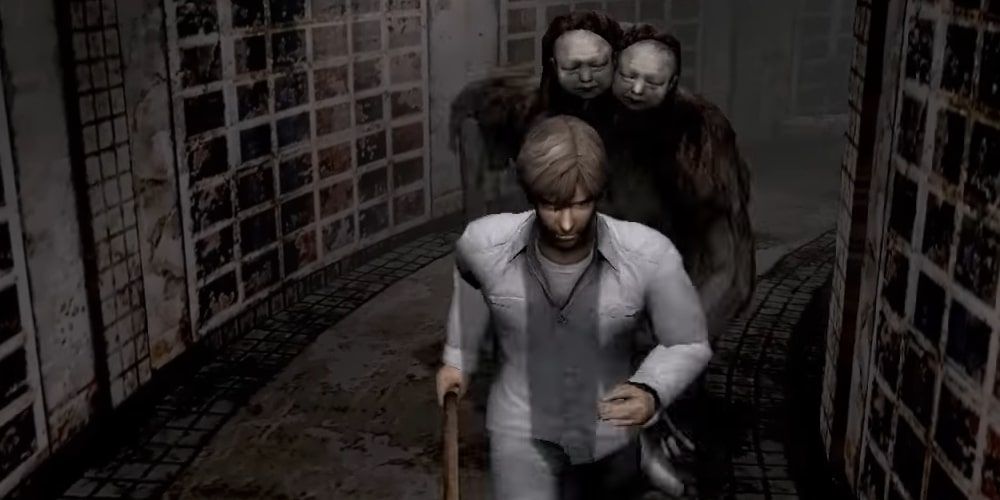 With a name like Twin Victims, you know you’re in for a frightening experience when it comes to these monsters. They’re from Silent Hill 4: The Room, and are found in the Water Prison panopticon. Although it's worth noting that they won’t attack you unless you disturb them.

Nevertheless, their design is one of the most disturbing in the Silent Hill series. The peaceful expression on their childlike faces contrasts with their gigantic arms, which they use as a pair of legs to lunge towards you. This monstrous representation of a child is disquieting and the disturbing sounds these two-headed monsters make immediately position them as nightmare fuel.