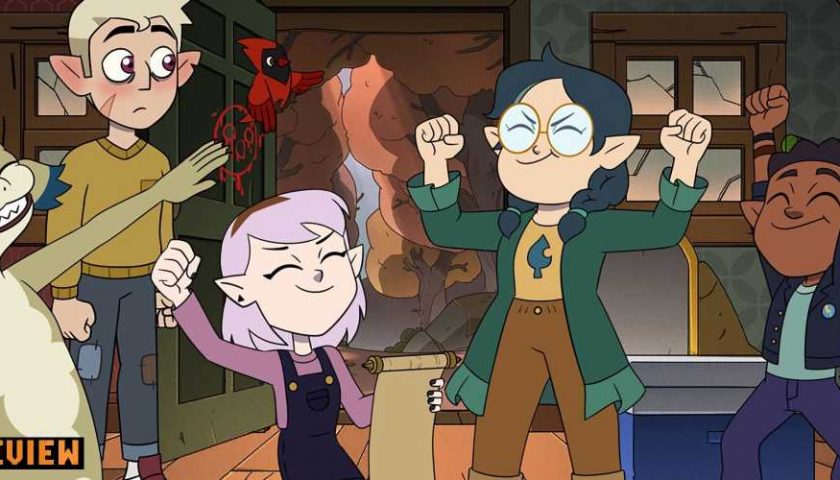 Grief is one hell of a thing. We can express it by running from the ones we love, closing ourselves off before embracing our own inner turmoil, or by doing all in our power to protect the people we have left. It’s an emotion that can manifest itself in myriad ways, and there is no right or wrong way to experience it. When you lose a parent, an entire family is torn apart, and with one as small as the Nocedas, keeping it together is paramount.

The Owl House has always performed a delicate dance with these themes, teasing tragic revelations on the narrative periphery as Luz Noceda embarks on magical adventures away from her normal life. She has an excuse to briefly forget the trauma holding her back, but always knew that deep down the music would eventually need to be faced, whether she was ready for its crescendo or not.

As the first of three specials set to make up the final season of Dana Terrace’s beloved animated show, Thanks To Them is a bittersweet reminder that we should never judge a book by its cover, and always keep those that mean the most to us close, even if invisible voices are begging us to push them away.

Disney has forbidden me from talking about major spoilers until the premiere, otherwise Hooty will haunt my nightmares, so I’ll try and tiptoe around the biggest twist and turns while still providing a solid idea of exactly what this first special does so well. Coming in at 46 minutes, not a single moment feels wasted as we spend the entire episode in the Human Realm. Luz returns to high school in order to restore a sense of normality to her existence, while Amity, Hunter, Gus, and Willow turn the once abandoned portal cottage in the midst of the forest into a personal hideout. Previously tattered walls are now adorned with nerdy posters and doodles of lost relatives, as personal touches scattered about the place hint at how much these characters have grown in just a few short months.

The opening montage also acts as a fairly significant skip forward in time. Amity’s hair dye is fading, Hunter gives himself a haircut, and Gus now has an unrivalled fashion sense. Their respective bonds have grown stronger too, whether it be Hunter bursting into tears after Luz welcomes him to their family, or Amity and Willow briefly reconciling their controversial past after making a summer filled with memories in a world previously unknown. The Owl House doesn’t have a lot of time to close off its character arcs, but the writers have done a wonderful job condensing this ambition down into digestible chunks and nuanced exposition that never once feels ham fisted. I even have hope for some of my dream pairings getting together, and no, I refuse to mention which ones. Like I said, Hooty nightmares are a thing. 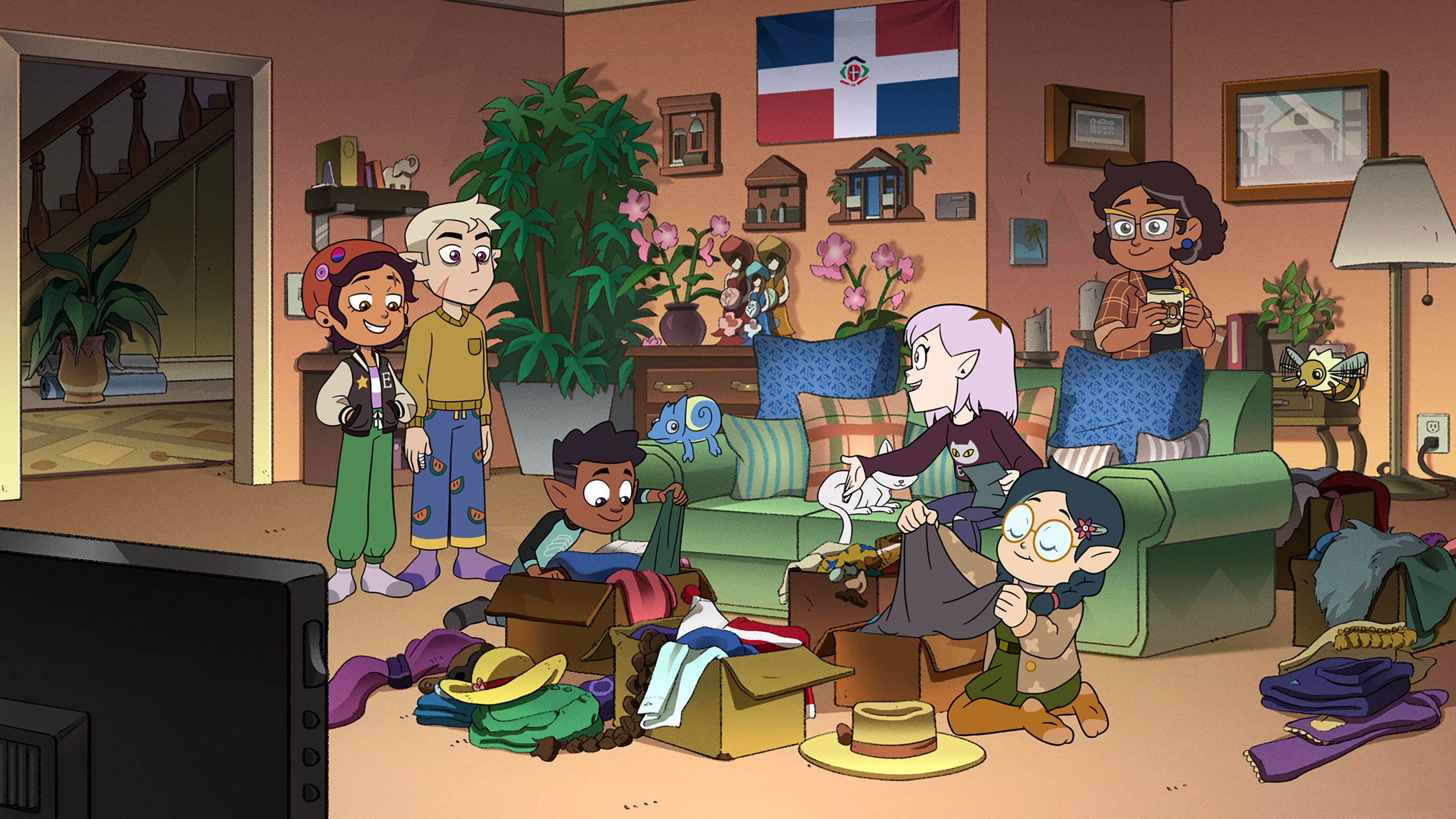 Everything has a purpose, with even the smallest occurrences adding weight to character dynamics or the final battle that awaits us on the horizon. Given its current trajectory, I also admire the restraint shown across the first special, and how it understands the importance of fleshing out backstories and establishing emotional foundations even when so frighteningly set against the clock. Luz’s brief return to education allows her friends a chance to explore the human world on their own terms, and it’s an incredible selection of scenes. We see them hit up the local library as Amity awkwardly tries to charm an old piece of furniture before falling flat on her face, while a giraffe at the zoo reminds them why they were all banished in the first place. Turns out those things can recognise witches from a mile away.

Dilemmas that might have taken up entire episodes in a more conventional season are brushed over here, making it more akin to the opening act of a feature film instead of a serialised television show. The stakes to come are established beautifully, while perception of characters we thought we knew are challenged time and time again as new revelations come to light and the doomsday clock ticks forward. My personal favourite is the growth of Camila Noceda – the MVP of this entire episode. Not only does she wear a Pride badge as a permanent part of her design now, she becomes a passionate mother of six to a load of teenagers who showed up on her doorstep with nowhere else to go. 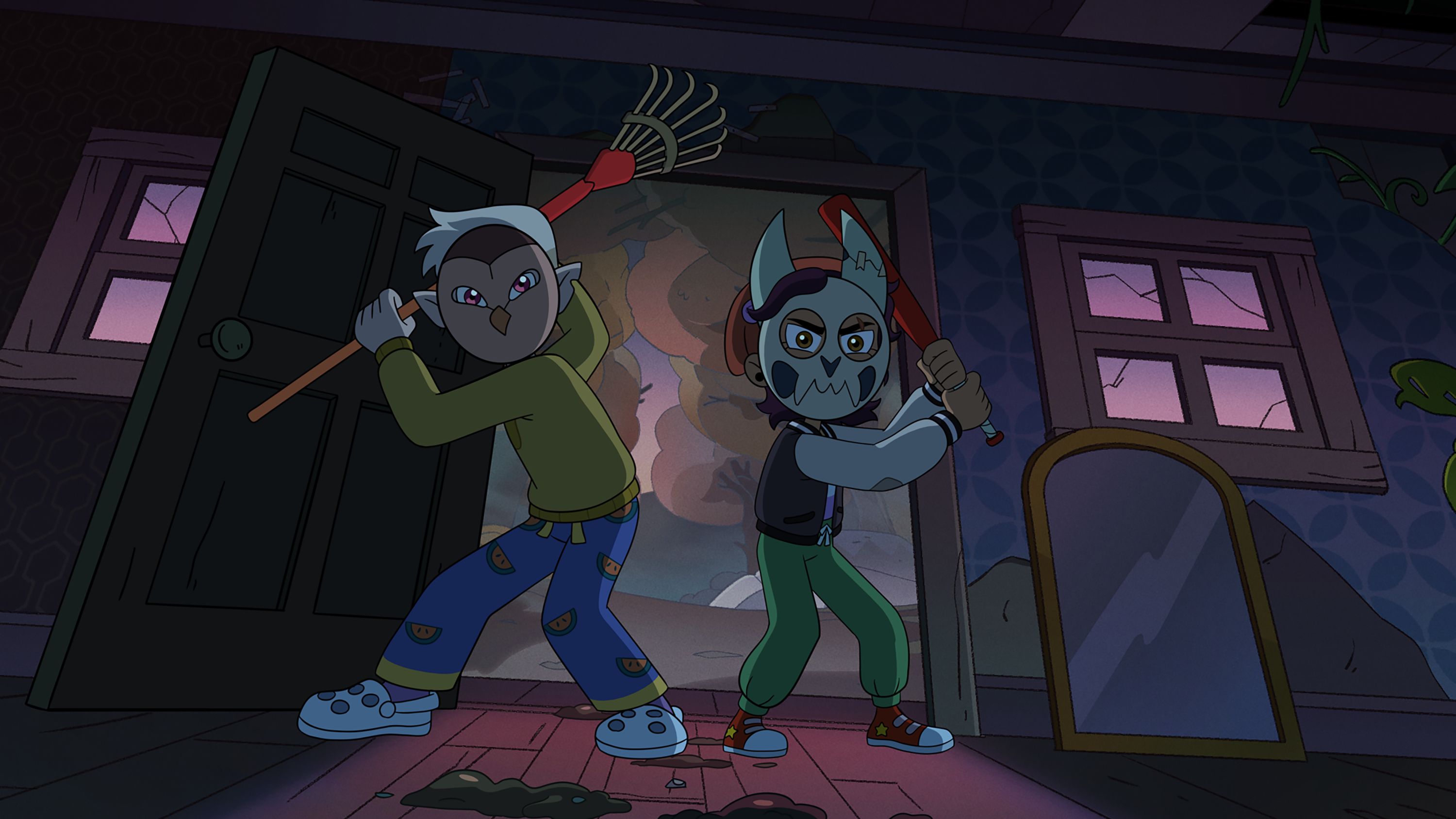 She takes it in her stride though and quickly embraces the idea of her daughter spending months in the Boiling Isles and having to save the world because it represents everything she has always wanted for her family. In the past, we’ve often painted Camila as a flawed parent because she was so quick to cast her daughter off to a camp for out of place children, but we never knew the context behind that decision. In our eyes, she saw Luz’s behaviour as strange, or believed it held her back from pursuing a future more befitting of her potential. The truth is far more heart-wrenching, and cemented in a poignant exploration of grief.

The cyclical nature of familial trauma and wanting to protect your offspring from experiencing the same derision you felt is a natural thing for a parent to strive for, even if it goes against their inner feelings. Or in Luz’s case, drives them apart for months at a time as our heroine falsely believes she isn’t wanted anymore. Camila was also bullied in school, lost her husband, and is trying everything she can to stop her daughter from making the same mistakes. It’s hard to watch, yet is a tremendously executed arc that redefines both these characters in fundamental ways. It could have been brushed over to get to the meat of things, but we’ve come to love these people and view them as so much more than drawings on a screen, and the creators are treating them with a level of respect equalling such admiration. Luz is like so many queer, neurodivergent, and lonely kids out there going through so much bullshit, and not once is that reality ignored in spite of all the magic. 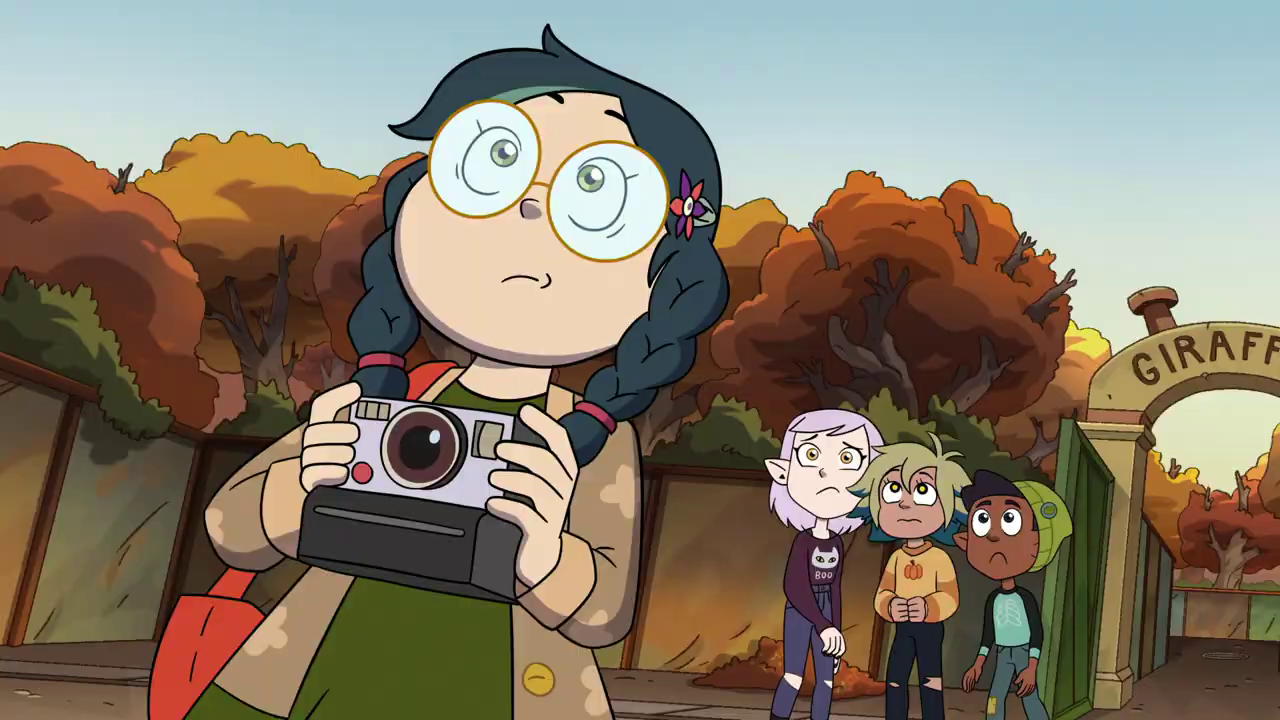 Dana Terrace was likely forced to take some beefy risks when wrapping things up across three extended specials, mentioning in the past how she and her team ended up creating something quite special given the limitations, and I can’t help but feel that this thematic deepening is a core part of that vision. Mature, introspective storytelling that understands the universal plight of young people going through grief and how they hope to navigate it. I won’t go any further, but the end result is spectacular, and a few surprising reveals will have fans wiping away tears and cheering in relief. It only made me cry three and a half times, which ain’t half bad.

Spoiling anything about the wider narrative would be awfully devilish of me, but I promise it’s incredible. The town of Gravesfield is a hauntingly autumnal locale ready to celebrate the spooky season, with the dawn of Halloween and all the things that come with it acting as a perfect springboard for our crew to nerd out and don their homemade Good Witch Azura cosplay. Hunter becoming obsessed with a bootleg version of Star Trek is especially adorable, and a welcome moment of levity for a character who has been through so much. 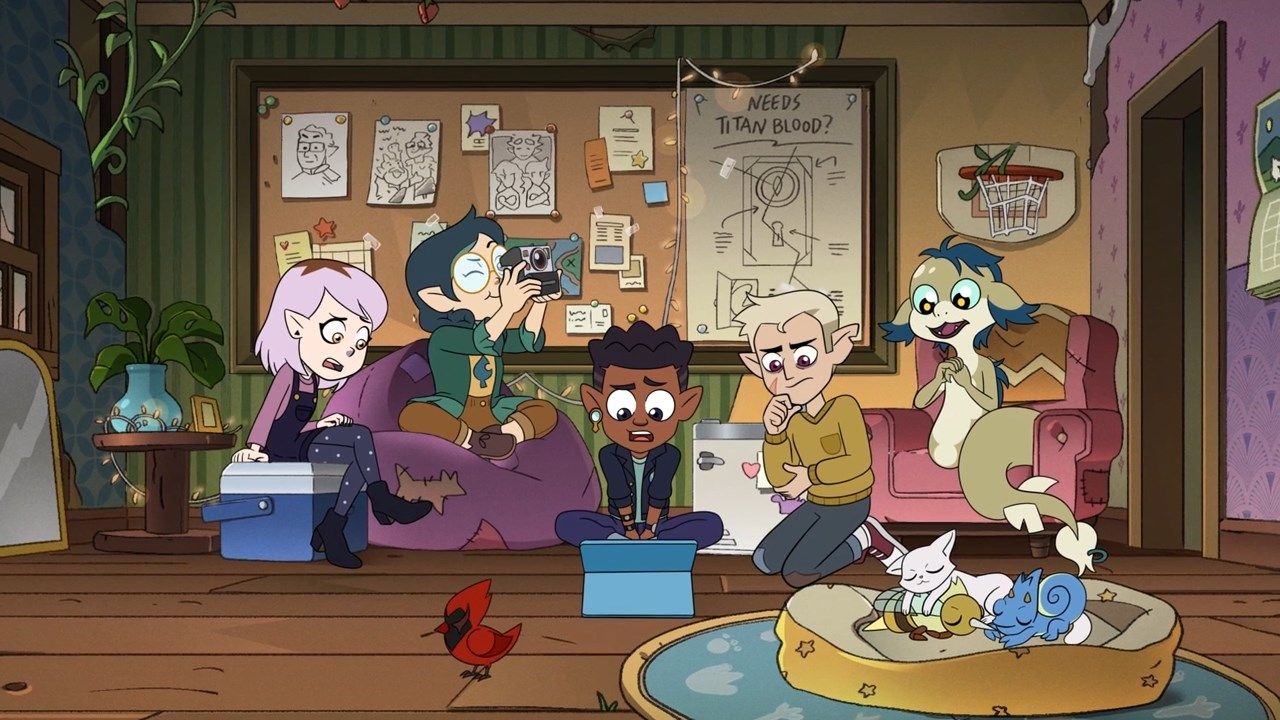 There’s also the animation to talk about, which borders on feature film quality during certain sequences. The Owl House might be coming to an end, but it isn’t going down quietly. Each frame is gorgeously detailed, packed with intricate little Easter Eggs and slivers of lore that make the world feel so much richer. A side character’s nails are painted a certain colour to establish their non-binary identity, while a few flirtatious comments with a certain sluggish shapeshifter will no doubt cause the fandom to lose their minds at all the shining potential. And of course, the first special is relentlessly fruity. These witches gay. Good for them.

I think I finally figured out why I love this show so much. It has been through hell and back, yet still keeps on trucking and standing for something in spite of adversity. This is the beginning of the end for Luz Noceda and company, but the closer we come to saying goodbye, the more I’m convinced the spirit at the centre of it all will never fade away.

The Owl House returns to Disney Channel on October 15 at 9pm PDT.