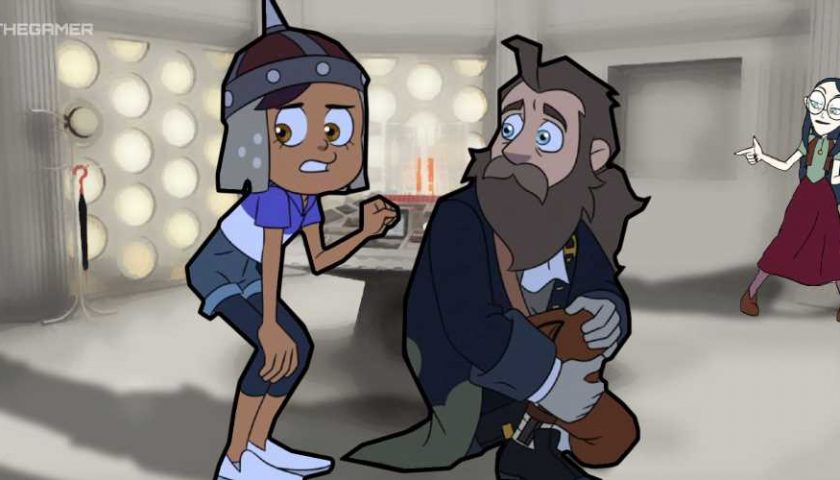 After Follies at the Coven Day Parade kicked off Season 2B with a bang last week, The Owl House continues to deliver startling narrative revelations at an alarming rate. We knew ahead of time that Elsewhere and Elsewhen would involve Luz Noceda investigating the mystery of Philip Wittebane – a human who, much like Luz, found himself stranded in The Boiling Isles several centuries ago. He strived to build a portal and return to the human realm, presumably harbouring secrets that our heroine can use to reunite with her family.

We saw that line of intrigue addressed, but it was explored in such a defining way that now entire foundations surrounding certain characters and theories have been upended. I’m not sure if its due to the show’s shortened order and its need to build upon storylines and character arc far quicker than anticipated, but The Owl House is gaining a level of momentum that makes each new episode an exciting guessing game of what will happen next and how it will influence the continuous flow of storytelling.

This week we saw the introduction of magical time travel, which should set off alarm bells for anyone who takes even a passing interest in the topic. Renowned transphobe JK Rowling introduced the Time Turner in Harry Potter & the Prisoner of Azkaban and subsequently had them all destroyed in a laughably contrived incident two books later because she failed to consider how such a monumental power would undermine absolutely everything from that point onward. 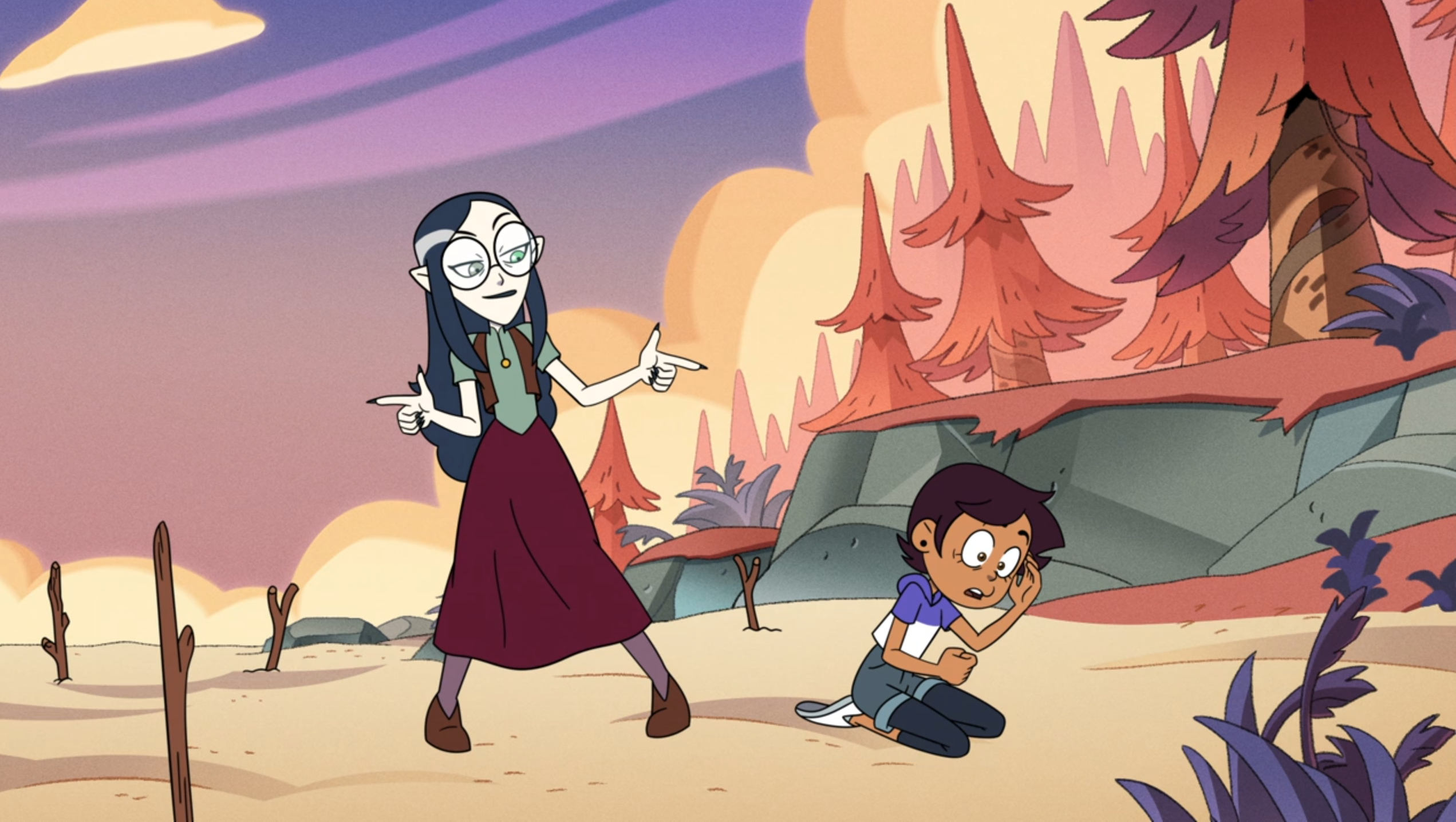 When I saw that Luz Noceda and Lilith Clawthorne were going to make use of Titan’s Blood to travel back through time I was worried, afraid The Owl House was going to shoot itself in the foot with a plot development it would never be able to take back. Luckily it’s actually smart. Instead of making time travel possible through the use of a secret object with an element of permanence, it can only be achieved by gathering finite ingredients and travelling to a very specific place in The Boiling Isles where the fabric of reality is in a constant state of flux. When executed, it’s as if different time periods exist on top of one another, accessed by dipping your heads into the ground and emerging in a different place and time altogether.

Lilith trips over a rock in a certain scene before cursing at it, only to realise later on that it wasn’t a rock, she had instead accidentally kicked herself in the head as she peered into this reality from a completely different instance in time. It’s a bit complicated to wrap your head around and you could probably poke holes in the exact science, but it’s loosely defined enough that Dana Terrace won’t need to worry about fans pulling a Time Turner complaint on her ass upon the show’s finale. After figuring out where exactly Philip Wittebane resides they jump into the ether and find themselves in the 1660s. 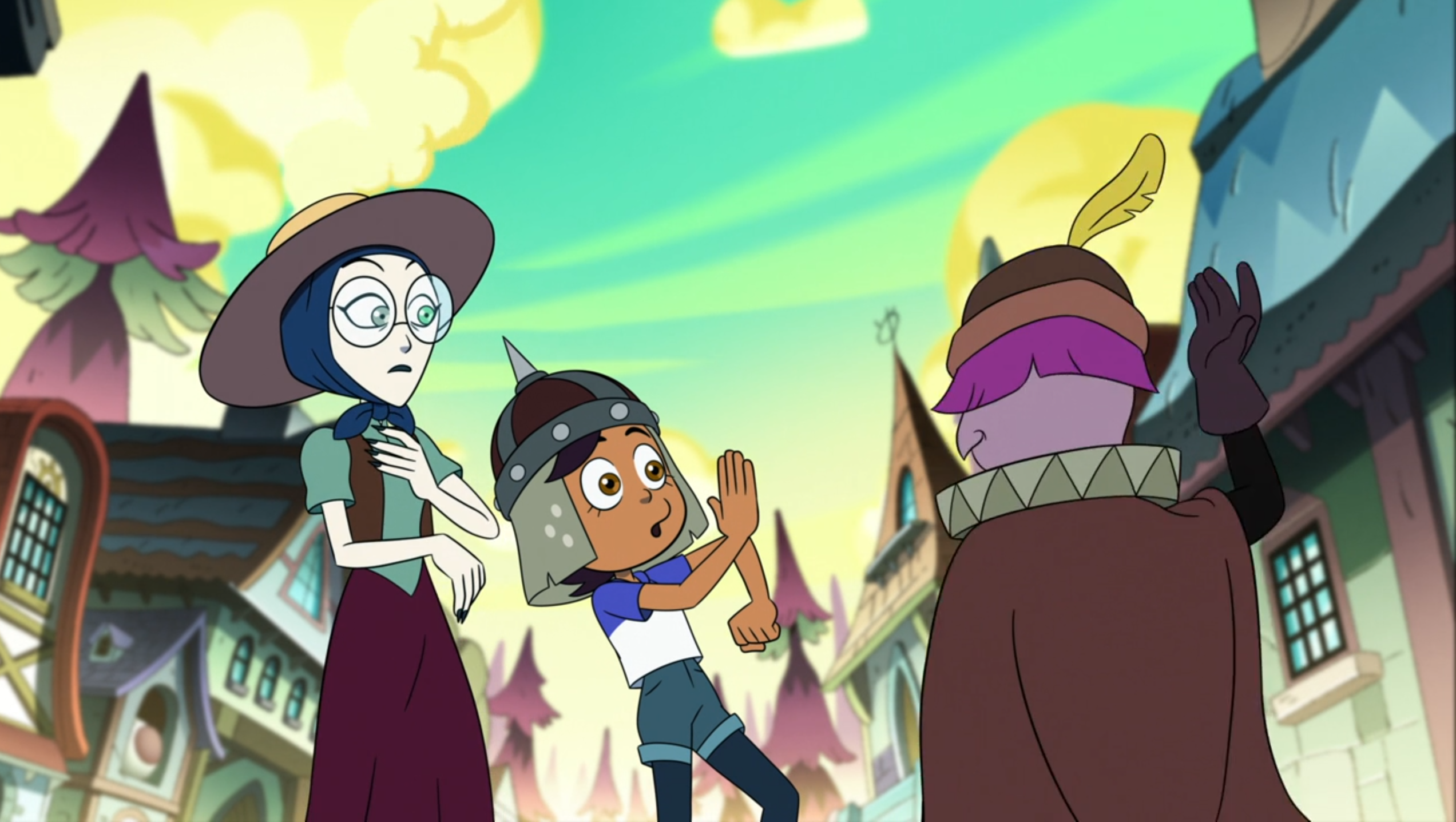 A harsher, more archaic period where magic is far less regulated and survival is a constant pursuit, our two heroines don hats to hide their identities as they begin questioning the local populace. Covens seemingly don’t exist here, while everyone is free to use whatever magic they please instead of being thrust into a societal system where spells are kept under strict supervision to avoid people having too much power. It’s peaceful, and a sign of what The Boiling Isles could be if it wasn’t under the tyrannical rule of Emperor Belos. We’ll get back to him later, because there’s an awfully juicy twist waiting just around the corner.

It doesn’t take long for Luz to stumble upon Wittebane, who is being bullied by a couple of grumpy giants who threaten to scorch his research notes into ashes. He’s your classic human nerd – soft spoken, articulate, and hiding a dark side that will soon become clear. Once he learns that Luz also comes from the human world they decide to work together, hoping to solve a mystery that is preventing the professor from accessing a valuable scientific discovery. He seems lovely at the first, with the two humans finding out they have much in common despite coming from different generations altogether. 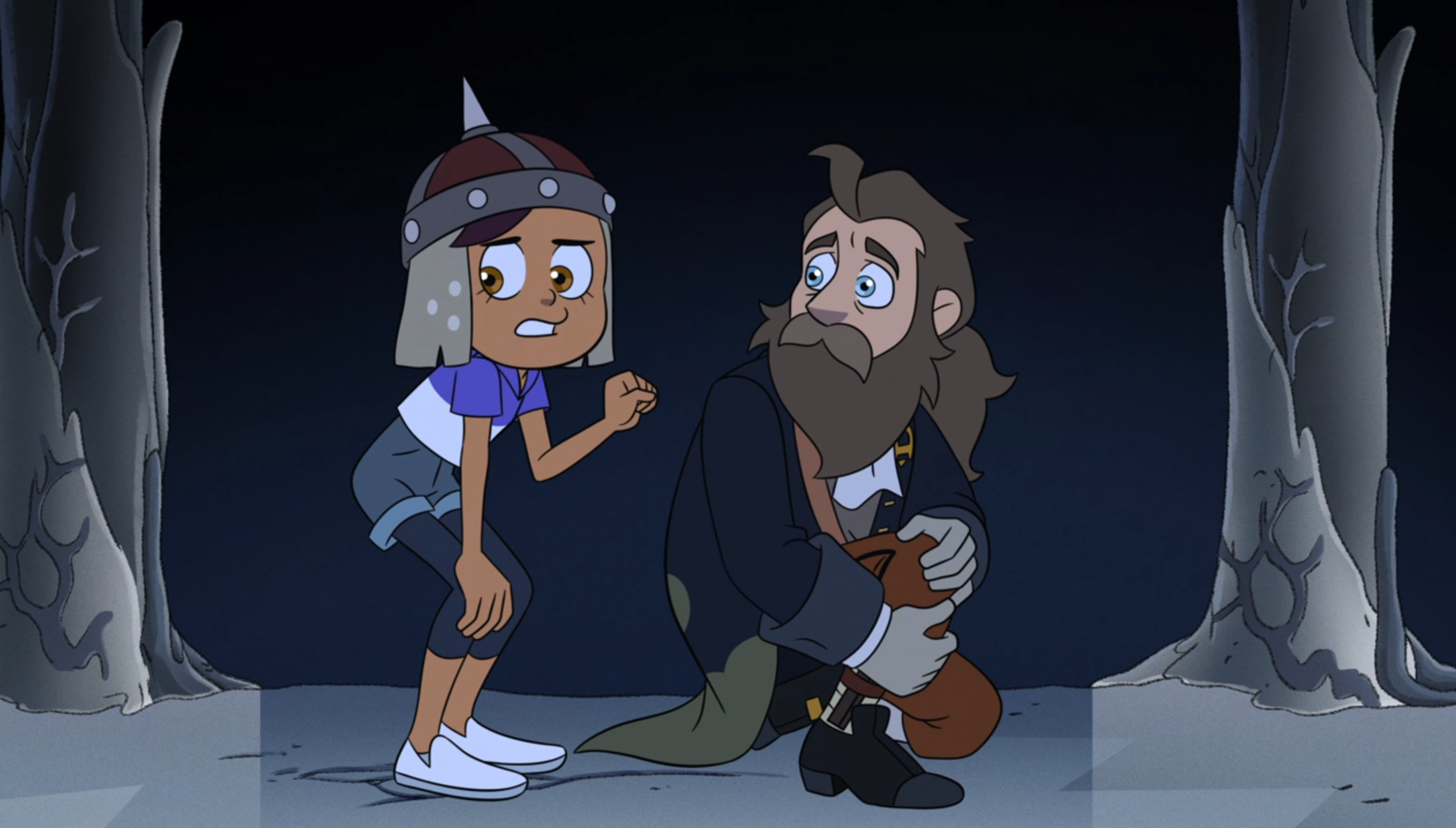 There is no reason not to trust him, so when Wittebane leads Luz and Lilith into an ancient temple only to have them act as bait for an awaiting monster it feels like a genuine betrayal. He didn’t want friends or a fellow human to confide in, he merely wished for yet another foolish group of adventurers to fight his battles for him while he reaped all the rewards. He’s a dirtbag, and not the saviour that Luz has been hoping for all this time. It’s a compelling surprise, and eliminates a character I expected to be a mainstay in the weeks to come.

Fortunately for us it doesn’t take long for Luz and Lilith to befriend the creature, riding it away from the ruins as they catch up to Wittebane and prepare to kick his teeth in. Watching as Lilith rocks off her newly acquired steed to punch Wittebane directy in the face is not only fantastic to witness, but also shakes the very foundations of the show itself. Our cool witch auntie tells him to ‘Stay Mad’ as he curses the presence of witches and unregulated magic, planting the seeds of resentment that will result in the creation of a far greater evil. 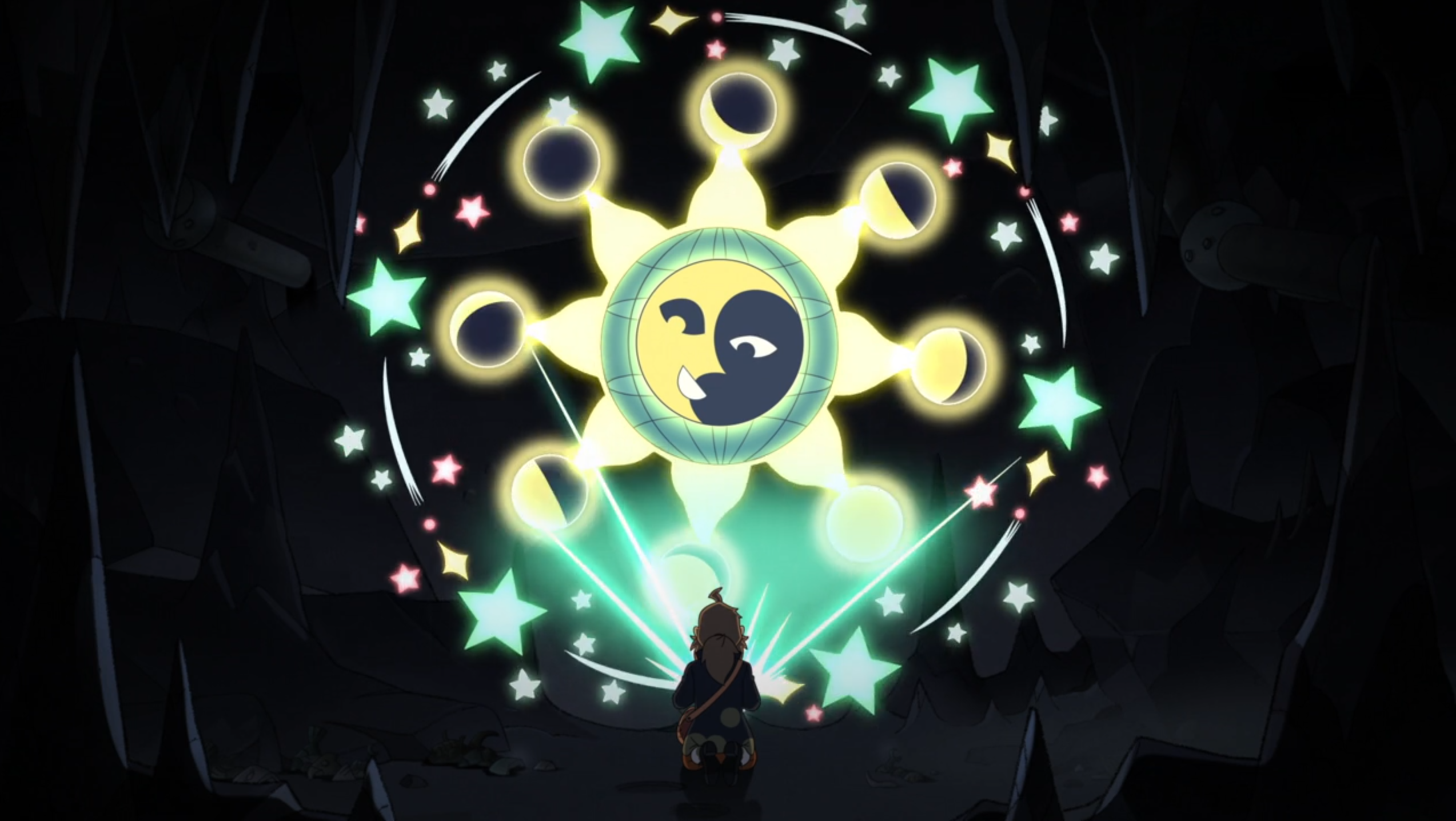 The episode concludes with Wittebane retreating to a cave with his newly acquired treasure – which appears to be a fancy mirror of sorts – using it to project a sequence of ancient runes on the wall that will presumably call forth The Collector, a figure mentioned throughout Elsewhere and Elsewhen and will likely emerge as a hero, villain, or powerful yet neutral force in the episodes to come. Wittebane’s arm also convulses with a mixture of ominous runes and magical energy, hinting that he is holding back a power that will soon burst forth and prove unstoppable. He was our big bad all along.

Wittebane is secretly Emperor Belos, and his recent encounter with Luz and Lilith is the catalyst to embracing the tyrant he has become in the present day. I imagine he is smart enough to recognise Luz and Lilith beneath their disguises, and being beaten down to nothing by a couple of lowly witches is reason enough for him to banish unregulated magic once and for all so his vision of a perfect world can begin to form. Lilith deciding to stand up for her surrogate niece by clocking a loser in the face for almost getting them killed has set in motion a sequence of events that made this entire charade possible. 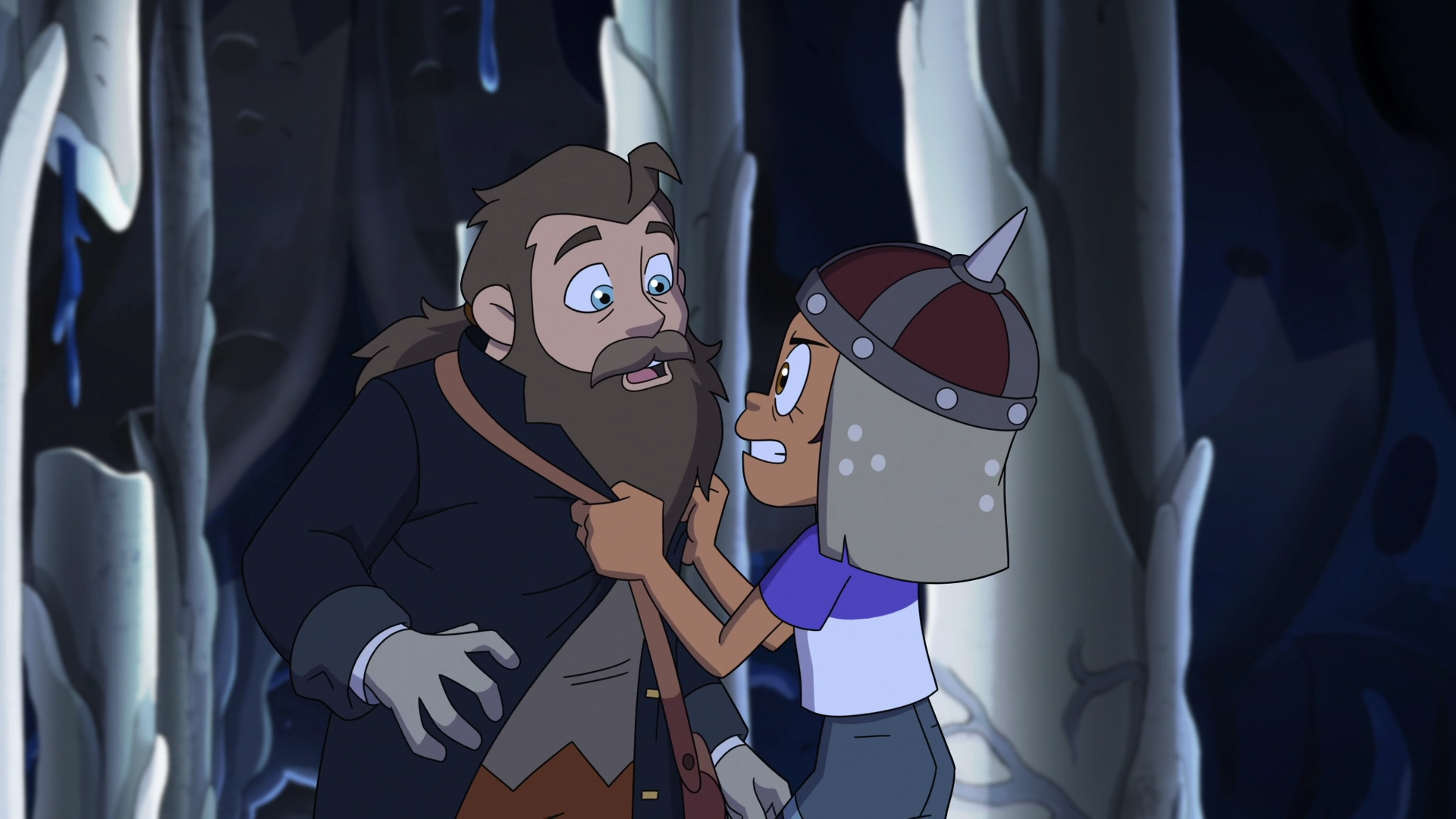 Time travel is complicated though. Did this incident always happen, and the Emperor Belos we know and hate has been acting in response to it the entire time? Or will Luz and Lilith return to a world where his ideology is even more corrupt and he will now be on a warpath to take them down and bring unregulated magic to halt by any means necessary. When you stop to think about time travel and the consequences involved you’ll inevitably go cross-eyed like when it’s explained to Austin Powers, having to just suck it up and accept that there’s no concrete explanation for how these things are meant to work.

Despite all the potential contrivances this is a damn exciting twist. Luz Noceda and Emperor Belos are tied together by a string of fate that makes their inevitable confrontation a consequence of destiny. Luz is partly responsible for his rise to power, unknowingly enabling his hatred of witches and magic so he can justify his twisted mindset. Belos appears to his subjects in the modern era as a softly spoken diplomat, convincing thousands that he is doing the right thing and everyone will be far more prosperous under his rule. It’s the same facade he used to trick Luz and Lilith, convincing them he needed help and they’d both benefit from it. His true intentions are opaquely sinister, and now we know of his origins the coming weeks just got a whole lot scarier.